The Dow Jones Industrial Average reached 27,000 for the first time ever Thursday as stocks were jolted by the prospects of easier monetary policy from the Federal Reserve. But the path to 28,000 may hinge on a resolution to the U.S.-China trade conflict, according to Wall Street analysts.

CNBC used FactSet data to find the Dow stocks with the most upside according to analysts’ price forecasts. Of the top five stocks expected to rise the most over the next 12 months, four are likely hinging on a trade deal between Beijing and Washington. 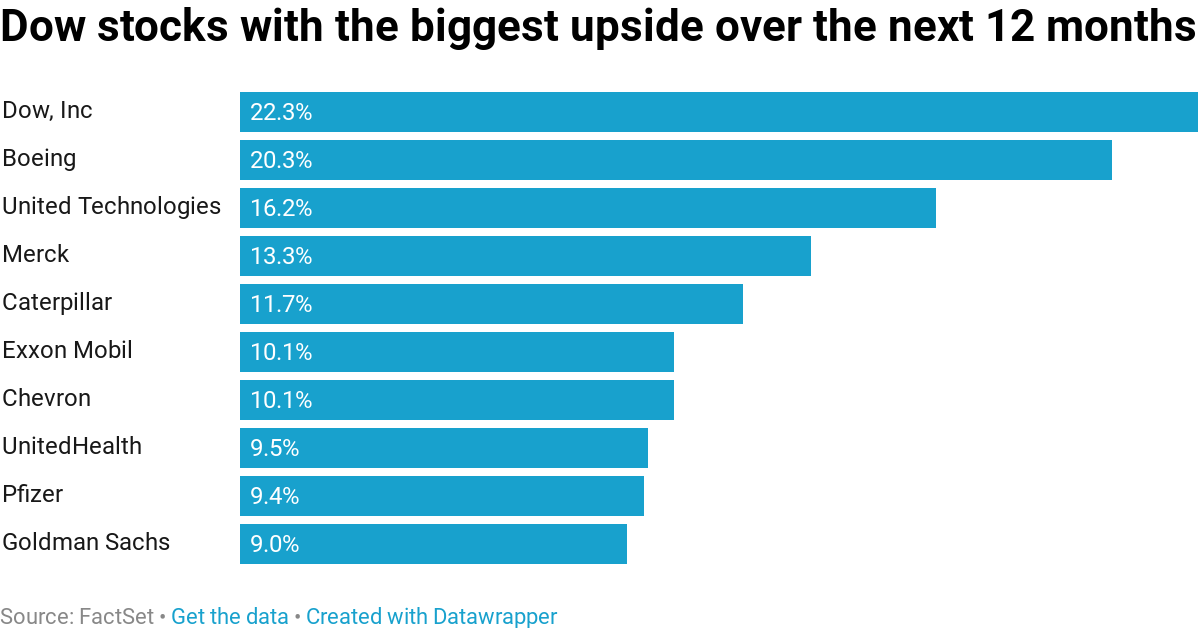 Chemical manufacturer Dow is expected to rise 22.3% over the next 12 months, according to the consensus analyst price forecast. Boeing is forecast to surge 20.3%. United Technologies and Caterpillar are forecast to jump 16.2% and 11.7%, respectively. If a trade deal doesn’t happen, analysts would likely have to dramatically lower the forecasts for these multinationals.

Merck is the only company in the top five with no direct exposure to the trade war. It is expected to rise 13.3%.

Last month, the U.S. and China agreed to restart trade talks, increasing hopes that a trade deal could come in the near future. The two countries agreed not to impose additional tariffs on their goods as negotiations resume. President Donald Trump also said China agreed to buy more U.S. agricultural products.

Pfizer and Goldman Sachs, meanwhile, are forecast to rise more than 9% each over the next 12 months.

To be sure, analyst price forecasts are no guarantee about the future. Some traders on Wall Street even use the more bullish ones as contrarian indicators. Nonetheless, if stocks march higher in the next year on a trade deal, these stocks are likely to lead.