People flocking to the beach to escape the heatwave have found themselves at the mercy of aggressive seagulls.

Birds have been captured on camera dive-bombing sunbathers on the beach in Lyme Regis, Dorset – just days after a dog owner claimed her pet Chihuahua had been ‘snatched’ by a seagull.

But a leading ornithologist has now hit back at critics calling for the gulls to be culled – arguing humans are to blame for their increasingly aggressive behaviour. 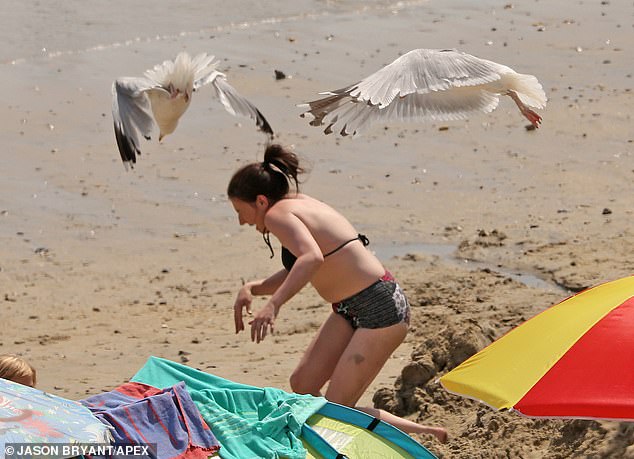 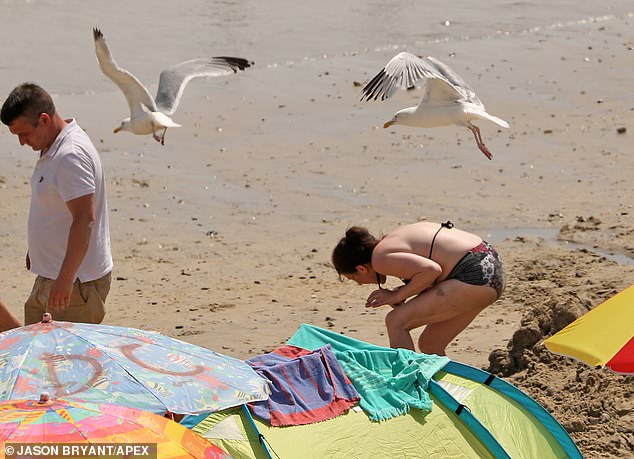 Gulls swooping in on sunseekers in Dorset, where thousands are enjoying a cooling dip

Pictures taken today show seagulls swooping in on sunseekers in Dorset, where thousands are enjoying a cooling dip amid blistering temperatures currently gripping the UK.

A recent poll found some 44 per cent of people in the UK are in favour of culling seagulls. 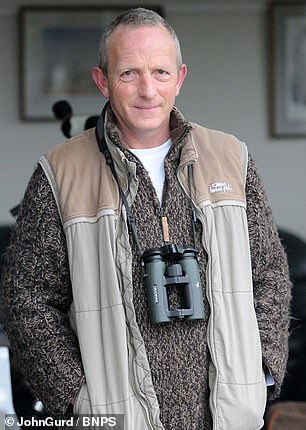 According to the RSPB, there are around 140,000 pairs of herring gulls in the UK in the breeding season and 740,000 individual birds in the winter.

A leading ornithologist told MailOnline the birds are ‘unfairly getting a bad reputation’ and says humans are to blame for the spate of attacks.

Martin Cade, who has studied birds for some 30 years, said people are encouraging gulls to scavenge in seaside towns as we continue to drop litter and throw food at them.

Mr Cade told MailOnline: ‘The only ones to blame are us – we’re encouraging seagulls to seaside towns.

‘They used to breed and nest on the sea cliffs and forage out to sea but now little old ladies buy bread and throw it out into their gardens – then their neighbours complain they can’t go outside.

‘A lot of blame is being apportioned to the seagulls but really people just throw out food willy-nilly.

‘The authorities in Weymouth are constantly asking people not to feed gulls but people are always throwing chips. Gulls are getting worse but it’s because of us.’ 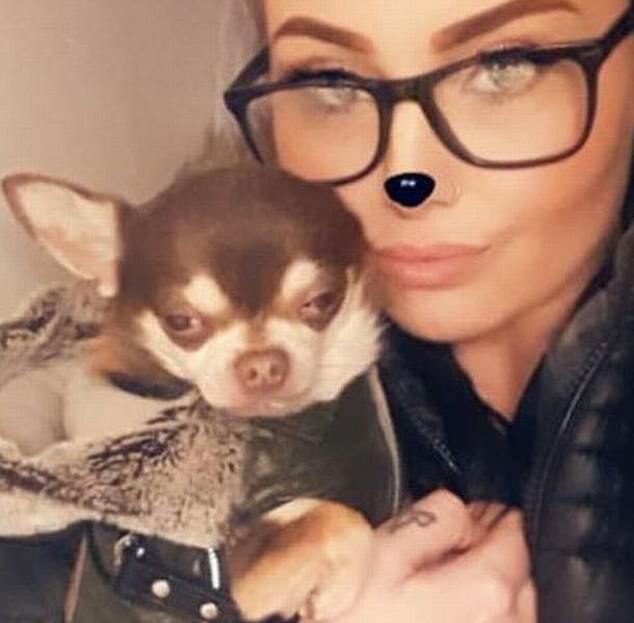 Have you been attacked by a seagull? 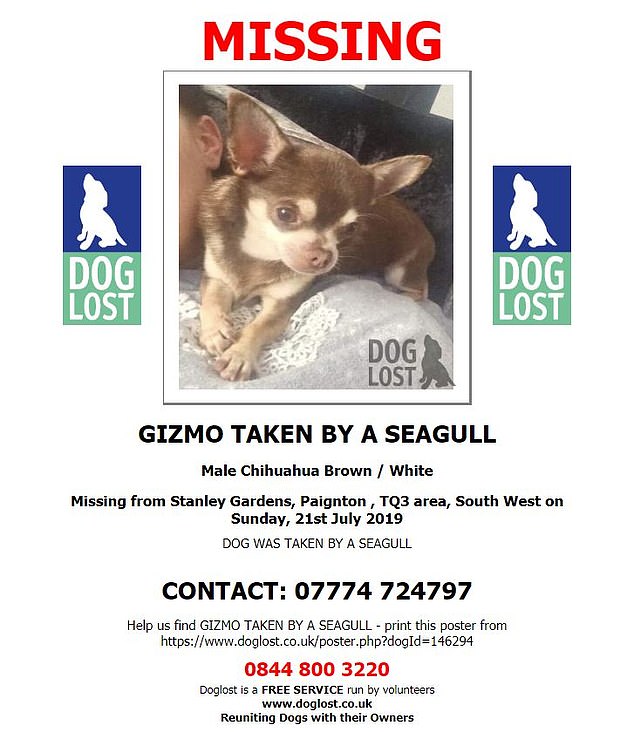 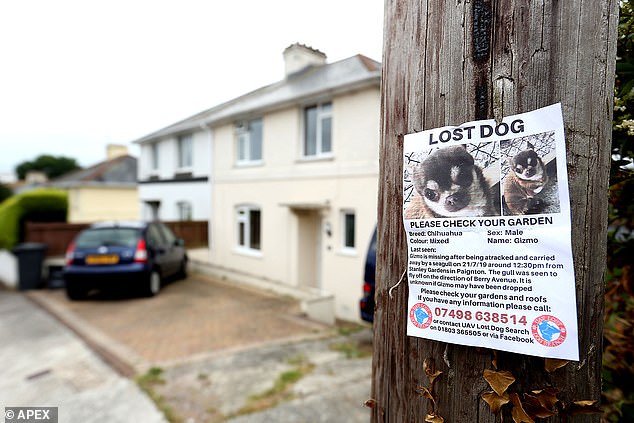 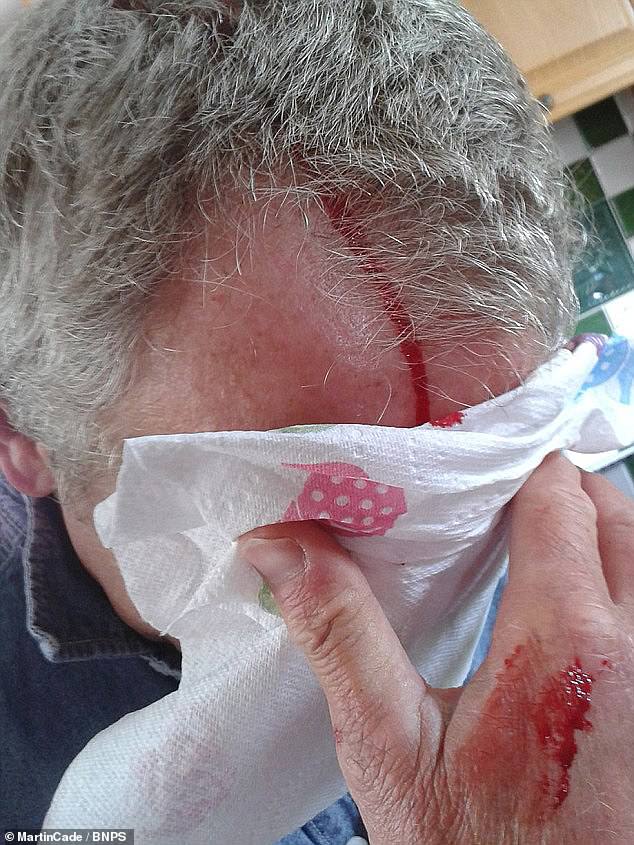 In 2016, Mr Cade suffered cuts to his head when he was attacked by a gull as he picked up its chick

Why are seagulls so aggressive?

Herring and lesser black-backed gulls are the two species most commonly referred to as seagulls.

They can measure up to two feet long, have a wingspan of nearly five foot, and weigh up to 2.5lb.

Notorious for being noisy, messy and brazen when it comes to attacking humans or small animals, seagulls are generally considered a public health risk in the UK.

Gulls can swoop down on people and their pets, leaving seaside-goers and animal owners terrified.

They usually dive on people or animals because one of their chicks has fallen from their nest and they want to frighten off any potential threats to stop them being hurt.

Their sharp beaks, claws and powerful wings mean they are capable of lifting small animals or whole containers off the ground and flying away with them.

Several councils in England, Scotland Wales and Northern Ireland have by-laws in place to ban people from feeding gulls and encouraging them to nest and breed.

Killing gulls should be a last resort, according to the Royal Society for the Protection of Birds, but measures are often put in place to rid them from towns and villages.

Their loud squawk and footfall are often considered to be a source of noise pollution, while their droppings often carry diseases and cause people and their pets to fall ill.

Gulls often pick at roofing materials and nest in gutters, which can cause serious damage to people’s homes, particularly if gas fumes are stopped from venting properly.

Former Britain’s Got Talent star Francine Lewis appeared on Good Morning Britain yesterday to press the case for the culling of birds.

She claimed she was is ‘terrified’ to go to the beach with her children out of fear of being attacked.

But wildlife expert and naturalist Chris Packham hit back: ‘They are very valuable members of our ecosystems, we can’t cherry pick which animals we like.’

Mr Cade said 30 years ago gulls in Weymouth made their home on the sea cliff but now live on roofs and feed around towns and villages, where there is a ready supply of food.

‘They’re not becoming more brutal and aggressive, they’re doing what comes naturally to them. They’d follow trawlers out to sea ordinarily and get discarded rubbish but this is an easy life for them – stealing chips.

‘They’re big, powerful aggressive birds and can be quite nasty pieces of work. That’s just the way they are.’

In 2016, Mr Cade suffered cuts to his head when he was attacked by a gull as he picked up its chick.

The 59-year-old was asked by his neighbour to help return the stranded gull to its nest on the roof of her house in Portland, Dorset.

But as he scooped up the bird he was dive-bombed by its parents which feared he was a threat to their baby.

Mr Cade said seagulls are enticed by food at the seaside and people leaving rubbish bins on the street.

‘They’re being unfairly portrayed – ultimately it’s our fault. The birds are quick learners, we give them an opportunity and they take it.

‘They make a nuisance of themselves because we allow it. It may be highly inconvenient in seaside resorts but it will happen.

Mr Cade also said it was ‘highly unlikely’ a seagull could have carried off a Chihuahua.

He said: ‘You see them carrying fair size fish but I’ve never heard of a gull carrying a dog. They ignore rats and rabbits and don’t actively look for live animals.

‘But if it is true, it’s probably killed it and eaten it.’