The new Prime Minister was en route to meet the Queen to start of his term of office when a group from Greenpeace fanned out across The Mall.

Police motorcycle riders quickly bundled the demonstrators out of the way and stopped three others who approached Mr Johnson’s Jaguar waving placards and a banner.

Mr Johnson’s car was quickly moving again and he arrived at a Buckingham Palace a short time later to meet the Queen and officially become Prime Minister. 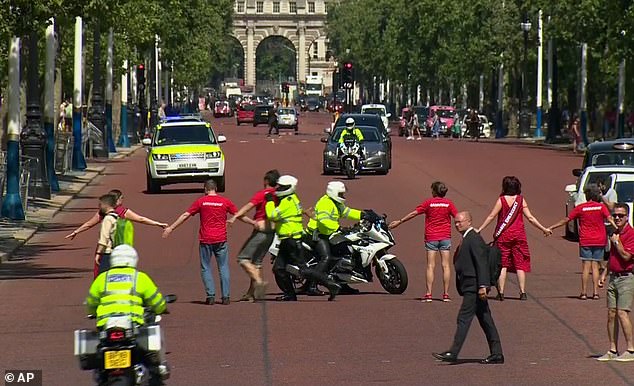 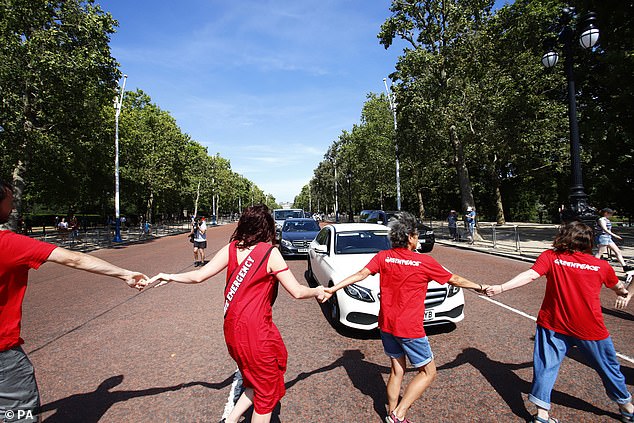 As Mr Johnson travelled to meet the Queen at Buckingham Palace today, a group of climate change activists formed a chain to stop him getting there 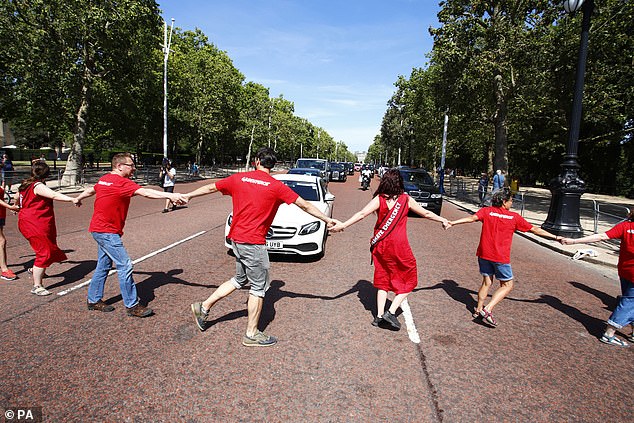 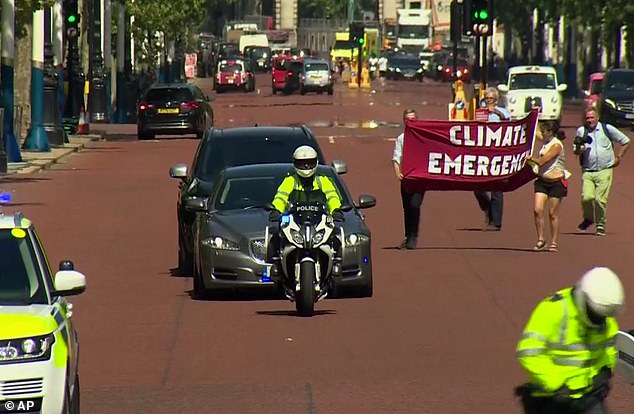 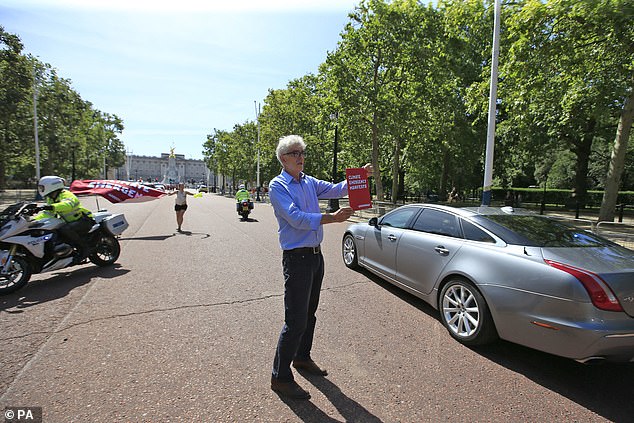 John Sauven, chief executive of Greenpeace UK, was part of the line of protesters that interrupted Boris Johnson’s motorcade

The group tweeted: ‘We just tried to hand the incoming PM a crucial letter – it contains the answers to tackling the Climate Emergency. But will he *act*?’

The group wants an emergency budget to put the UK on a path to net zero emissions, and for the Government to stop supporting ‘damaging’ projects such as Heathrow expansion.

Mr Sauven said: ‘The police were very fast in reacting and we were expecting that.

‘We weren’t trying to stop Boris Johnson becoming Prime Minister, we were trying to get a message to Boris that he has to treat the climate emergency seriously.

‘We need to put the pressure on him because his actual track record is not very good.

‘Until a few years ago he was a climate sceptic denying the science of climate change.’

He continued: ‘We want a green economy, we want green jobs, we want a healthy environment – this is really what [Mr Johnson] should be talking about now.’

‘He has very little mandate with such a slim majority but I think even the Conservative Party understand if they want votes in future they can’t start denying that the environment is beginning to be the top of people’s agenda. 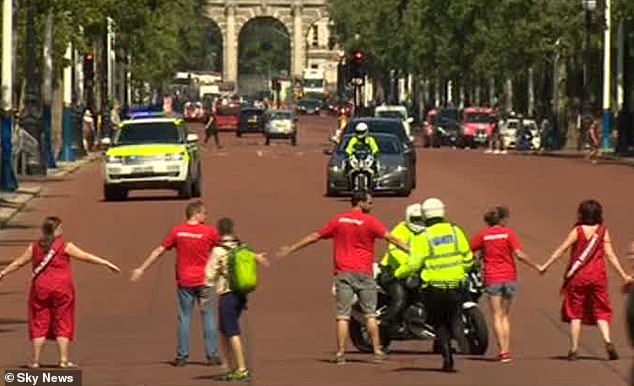 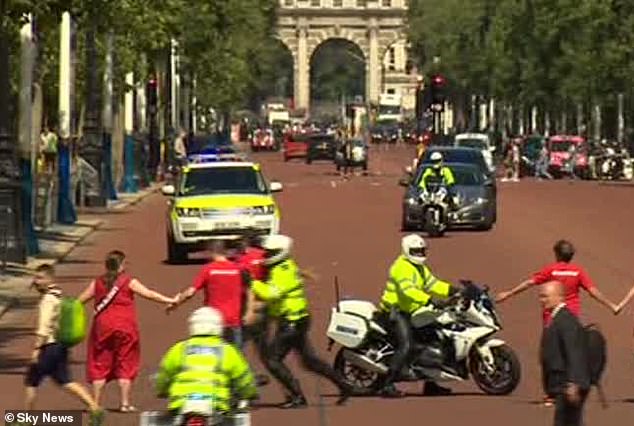 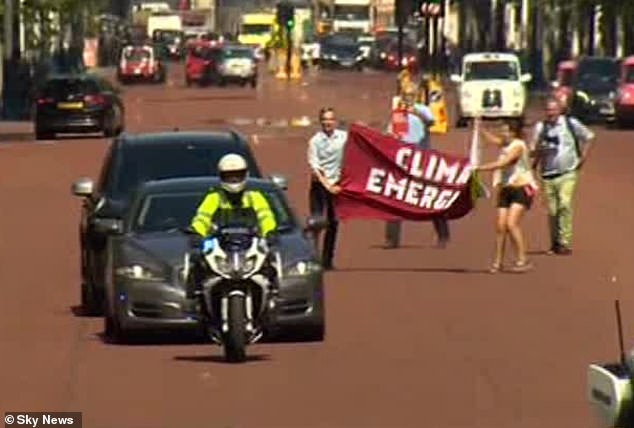 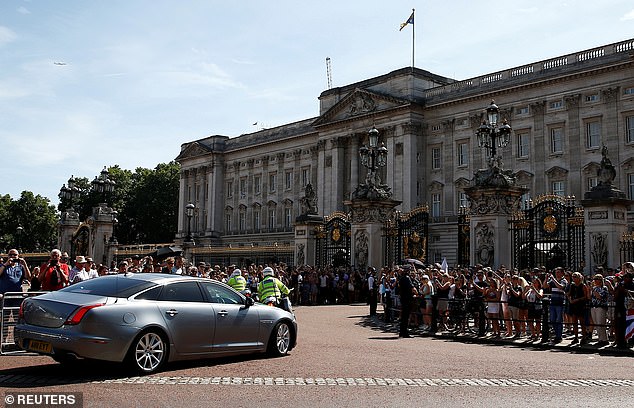 ‘People are beginning to see the reality of what climate change in future is going to mean for their lives and their livelihoods. I think there’s going to be a lot of pressure on him to act.’

The action by Greenpeace is the latest in a growing wave of protests calling for action to tackle the climate and environment emergency, with school strikes by children and disruption by Extinction Rebellion.

The protest was one of number being carried out today by a plethora of different groups, all keen to make a name for their cause on the day Britain gets a new leader.

This morning, a group called ‘Led by Donkeys’ projected an image of Boris onto Buckingham Palace, along with a caption calling him a liar.

Another group, who want a second referendum on Britain’s EU membership, stood outside Buckingham Palace with a sheet reading ‘Put it to the people’ on it.

The day of stunts continues this evening when a number of groups, including Corbynistas Momentum and anti-racism campaign Black Lives Matter, hold an event called ‘Fck Govt Fck Boris’ in central London.

Meanwhile in Scotland, Nationalists held a rally in Glasgow yesterday claiming the union of the United Kingdom should be dissolved following Boris Johnson’s election. 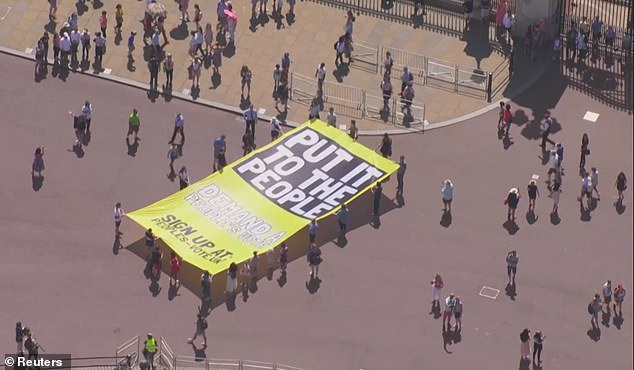 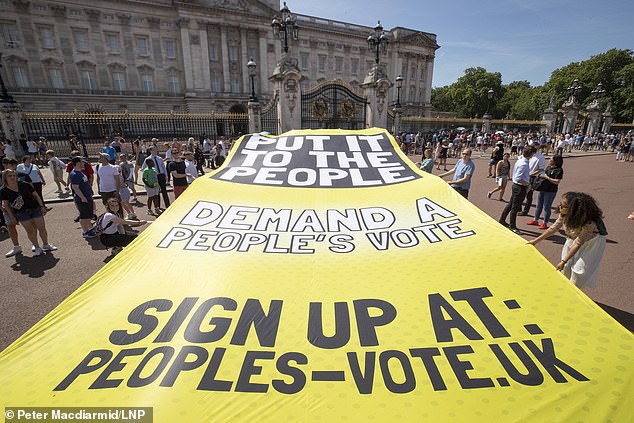