SE after a reign of seven years, as its jetliner deliveries fell by more than a third in the first half of 2019 with the grounding of its 737 MAX aircraft.

The U.S. aerospace giant’s best-selling MAX has been barred by safety regulators from flying passengers for almost four months, far longer than Boeing, its investors and airlines expected. Consumers have expressed misgivings about getting on the plane again, and a dearth of new sales to carriers has helped drain about $50 billion from Boeing’s market value since it peaked in March.

The company’s delivery slump has reverberated across an aerospace industry that had been enjoying an unprecedented decadelong boom. Some suppliers have been forced to trim output and idle staff, while airlines have had to cancel thousands of flights and seek compensation from the plane maker.

More than 150 undelivered MAX jets are parked at sites around the U.S., along with the 380 in airlines’ hands that were grounded by regulators in March. The flight ban followed a fatal crash of a MAX that month in Ethiopia, less than five months after one in Indonesia. The accidents took 346 lives. Boeing faces multiple lawsuits from victims’ families.

For the third straight month, Boeing reported on Tuesday no new orders of MAX aircraft, and its first-half deliveries overall fell to 239 planes, from 378 in the same period last year.

Analysts don’t expect regulators to clear the MAX to fly again before the end of September as Boeing continues work on fixes to the aircraft’s flight-control systems. That leaves the Chicago-based giant with a huge backlog of planes that won’t be delivered and paid for until well into 2020.

European rival Airbus shipped 389 planes through June and is on track to deliver a record number of jets this year after largely shaking off an array of production problems, including shortages of engines and interior parts. Airbus already has made public plans to further raise output of its best-selling A320neo, the direct rival to the MAX. Boeing has said it is focused on returning the MAX to airline service and will address production plans once that has been achieved.

Boeing’s deliveries are expected to drop this year as a result of its problems with the 737 MAX. 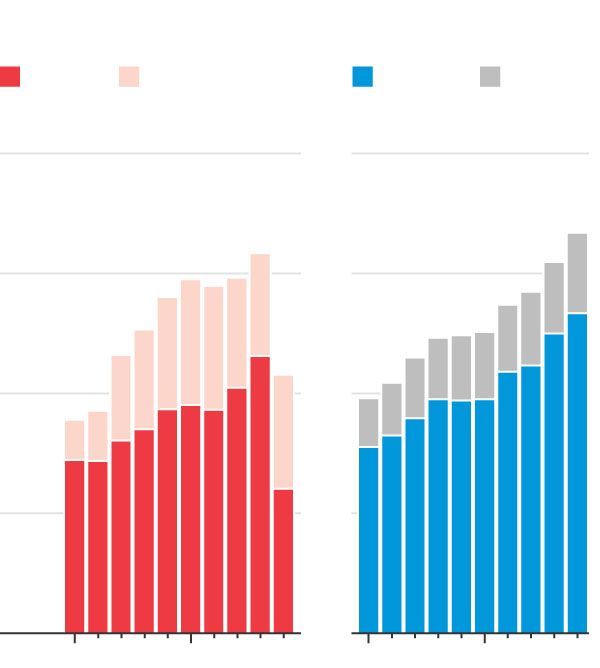 Boeing and Airbus have been engaged in a fierce battle over the past decade to scoop up orders for new jets from fast-growing airlines, especially in Asia. Combined they have amassed a backlog of almost 13,000 planes—or about seven years of production for each.

Boeing delivered more jets than Airbus in 2012, regaining the crown from its European rival after a decade in second place. Boeing has also led in orders and deliveries for larger planes such as its 787 Dreamliner and 777, which are typically more profitable than the workhorse single-aisle aircraft.

The MAX crisis has halted Boeing’s advance, wounding its reputation and leading to a flurry of compensation claims from airlines hit by the grounding as well as litigation from the families of the people killed in the two crashes.

Boeing now builds its 737 jets at a rate of 42 a month after cutting output by almost a fifth in April and shelving its plan to boost production. The undelivered planes are draining Boeing’s closely watched cash flow, which has been used to fund huge share buybacks and higher dividends.

Analysts expect Boeing to burn cash this year and increase its debt, adding to the pressure to deliver its 787 Dreamliner jets, aircraft services and defense equipment. It handed over a record 18 Dreamliners in June after boosting monthly production to 14. At the same time, the loss of MAX orders could translate into lower sales of services to airlines.

The company is scheduled to release second-quarter earnings on July 24, including the cash outflow impact from the MAX grounding. Analysts also expect a potential second charge from the cut in 737 production following a $1 billion earnings hit announced in April.

Airbus, based in Toulouse, France, has set a goal of delivering up to 890 planes this year, which would be an industry record. Boeing, which had planned to ship as many as 905 airliners this year, has suspended delivery guidance because of the MAX crisis.

Airbus hadn’t built half that number at the midyear mark, though that isn’t unusual for a company that typically scrambles to hand over a large number of planes to airlines in the final weeks of the year.

Even once regulators clear the MAX to resume carrying passengers, it could take months to return all of the idled planes to service. Analysts said it could take a couple of years before Boeing gets MAX deliveries back on schedule.

The two plane makers face some shared challenges. Airlines have slowed their plane-buying spree as global trade tensions rise, particularly between the U.S. and China, the world’s two largest airplane markets. The 560 orders and commitments made public by the two rivals at last month’s Paris Air Show was the lowest total at the biennial industry jamboree since 2009.

The International Air Transport Association, a trade group, last month trimmed the outlook for global airline profits this year by 21% to $28 billion. Airlines posted around $30 billion in combined profit in 2018.

Boeing this week lost a potential order for 50 MAX planes from a Saudi Arabian budget carrier. Flyadeal said it would instead buy up to 50 A320neo planes from Airbus, its existing supplier. Two Indonesian carriers have said they are considering canceling their MAX orders.

Boeing’s official order book doesn’t yet reflect a blockbuster deal for 200 MAX planes from British Airways’ parent International Consolidated Airlines Group SA announced at the Paris show. That is the first—and only—MAX deal since March, when the fleet was grounded.

Airbus took in 88 net orders in the first half, compared with 261 for the year-earlier period, in another sign of overall lackluster demand.

Boeing shares have fallen by about 18% since they peaked in March, just before the Ethiopian Airlines crash on March 10. Airbus shares are trading near their all-time high and are up more than 47% this year.

Write to Doug Cameron at doug.cameron@wsj.com and Robert Wall at robert.wall@wsj.com