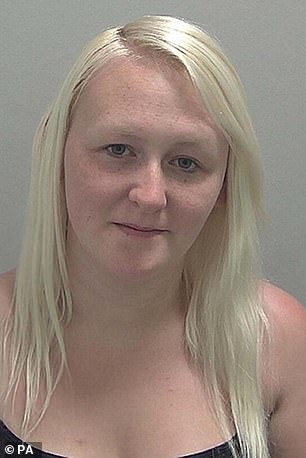 Louise Porton, 23, of Rugby, Warwickshire, murdered her two young daughters because they interfered with her job as a sex worker

A prostitute mother who cruelly murdered her two young children for getting in the way of her sex life has been condemned as a ‘monster’ by her own mother.

Porton, 23, of Rugby, Warwickshire, who killed the children in early 2018 after multiple attempts was jailed for life with a minimum term of 32 years today.

Speaking to the Sun, her mother Sharon said: ‘Something snapped in her head. She became a monster, my wonderful little girl changed.

‘She’s not the happy loving girl I brought up. I no longer consider her my daughter.’

Sharon also blasted social services who failed to take up warnings from ‘mulitple people’, questioning why there has yet to be an inquiry into the failings.

‘I cannot believe social services didn’t do more, they have blood on their hands. They could’ve done so much more. Louise didn’t care about Lexi’s death, she didn’t give a damn,’ said Sharon. 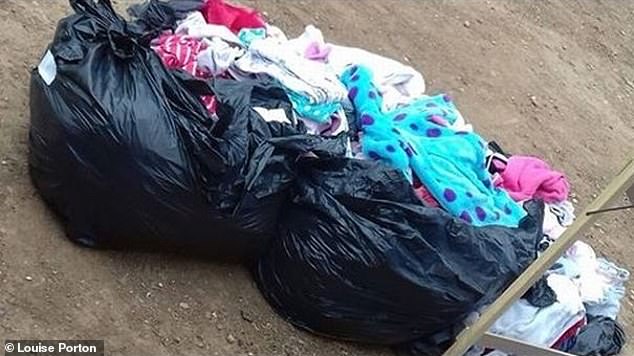 Louise Porton posted a picture on Facebook of several bin bags of clothes, selling them for £20

It has also emerged that Porton attempted to sell her daughters’ brightly coloured clothing in the months after she killed them.

Porton posted a picture of several bin bags on the ‘Swap/sell/buy things in Rugby’ Facebook page, selling them for £20 and saying: ‘Can deliver’.

Porton, a part-time model, who offered men she met online nude photographs or sex for cash, had tried to kill Lexi twice before succeeding in January 2018.

After the second attempt, she dialled 999 to report the child having a fit but paramedics arrived to find Lexi in a ‘deep state of unconsciousness’.

During that hospital admission, jurors in the four-week trial heard Porton sent one man a topless photo from a bathroom and agreed to participate in sex acts during a photoshoot if the photographer paid cash into her bank account.

Prosecutor Oliver Saxby QC said during the same period, the mother also passed her number to a hospital security guard and went on to exchange 87 messages with him.

Judge Mrs Justice Yip told Porton at Birmingham Crown Court today: ‘One way or another you squeezed the life out of your daughters. Why you did so only you know.

‘Your actions have devastated so many lives. Lexi and Scarlett had so much to offer to their wider family but you took all of that away.’

The girls’ father Chris Draper, 25, who never had the chance to meet Scarlett, said he was ‘broken’ after the deaths of the children who were ‘an inconvenience’ to Porton.

He added in a statement read on his behalf that his girls had been ‘let down by the system’, and his only comfort was ‘that both Lexi and Scarlett are together now’.

Porton, sat in the dock throughout the sentencing hearing looking at her feet with her head resting on her hands, did not react to Mr Draper’s statement.

Websites visited by Porton on a computer included: ‘Child revived almost 2hrs after drowning – but how?’ and ‘5 Weird things that happen after you die’. 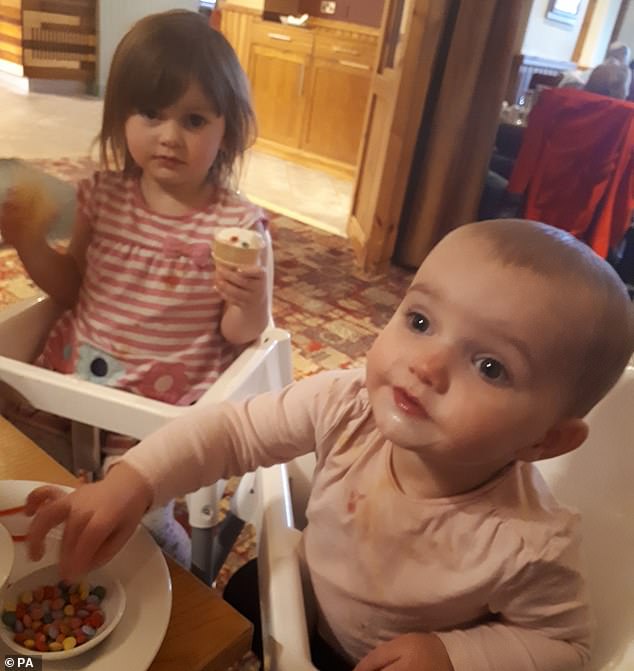 Jurors were told that after police seized her phone, they uncovered searches including how long it took a dead body ‘to go cold up to the shoulder’. Pictured: Lexi (left) and Scarlett (right)

And the judge added: ‘Your internet searching was sinister. You delayed calling for an ambulance until you were sure she was dead.’ 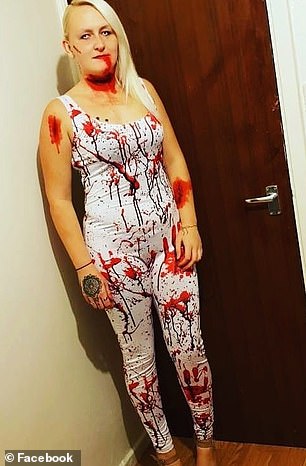 Mrs Justice Yip described her actions as ‘evil’ and ‘calculated’, and told her: ‘These were blameless young children who were plainly vulnerable and ought to have been able to rely on their mother to protect and nurture them.’

The court heard extracts from Porton’s WhatsApp messages and exchanges with online contacts, including at least one man she met on a dating app.

One message suggested Porton was prepared to have sex with a man in the bedsit she shared with her children but told him that their liaison must be ‘quiet’.

Mr Saxby said: ‘The overwhelming inference is Lexi and Scarlett died because someone deliberately interfered with their breathing.

‘At times, her two children got in the way of her doing what she wanted, when she wanted and with whom she wanted.’

Porton is pictured carrying Scarlett at the hotel. Police suggested the girl may have already been dead at this point as paramedics who treated her said she was ‘freezing and lifeless’

He also read a message from Porton’s sister accusing her of leaving her daughters alone to have sex with a van driver in his vehicle.

Father says girls were an ‘inconvenience’ to ‘evil’ Louise Porton

The following statement from the girls’ father Chris Draper, 25, was read out in court:

‘I am broken. I will never be the same person. I just keep asking myself why did Louise do something so evil to my beautiful daughters. They were just an inconvenience to you. Why did she not give them to me?

‘Because of Louise I will never be able to hear their voices. Louise deprived me of my daughters. I never met Scarlett. That pain will live me forever.

‘I hate Louise. No punishment will ever be enough. I now have depression and anxiety. I constantly think about the girls. Since Lexi and Scarlett died my mental health has declined.

‘I have regular appointments with my GP. I am unable to go back to work. All of these things have made day to day life difficult. We feel that the girls have been let down by the system.

‘This could have been prevented. This is something I thought I would never have to write. The only comfort is that both Lexi and Scarlett are together now.’

Porton was even seen making a video call with a man while arranging Lexi’s burial at a funeral home, the trial heard.

But that night, with Scarlett dying in the back seat of her car, Porton was filmed on CCTV stopping to fill up her car with petrol as she drove the child to hospital.

She later pulled over in a retail park and dialled 111 to report concern for her ‘sleeping’ child.

A paramedic dispatched to the scene described Scarlett’s body as ‘freezing’ and 35 minutes later the toddler was pronounced dead at University Hospital in Coventry.

In a poignant video released after the verdict, Porton was seen calmly ushering the girls into flats in Rugby, where the family had been housed by the local authority, the night before she killed Lexi.

Scarlett is then seen peering back through a glass door before she disappears inside.

A former landlady told police how she would often look after the girls as Porton ‘would do whatever she could’ not to have her daughters around.

Jurors heard that both children had symptoms consistent with deliberate airway obstruction and Scarlett had signs of recent bleeding in her neck tissue, suggestive of neck compression.

Porton leads her daughter into her home in Rugby the day before Lexi died. The killer was convicted of both her daughters’ murders at Birmingham Crown Court yesterday

This CCTV footage shows Porton taken her two daughters home the day before one, Lexi, died

Porton moved from Walsall to Rugby to try to deny Mr Draper contact.

Jurors were told that she gave Scarlett the surname of another boyfriend even though the girls were full sisters.

Mr Draper was in court to see Porton convicted of two counts of murder.

A former friend of Porton told the Mail how she would routinely ‘dump’ her children on her father at the weekends to go out drinking.

The woman, who asked not to be named, said: ‘He would go down every weekend to have the kids and she would go out on the town.

After the case, Detective Superintendent Pete Hill, of Warwickshire Police, said: ‘I will never be able to understand why Louise Porton murdered her children.

‘She has lied repeatedly to friends, family and professionals. At no point has she ever shown any real signs of emotion.’