‘Look at all these tubes. It’s like a patient in intensive care – but then I suppose that’s what this is,’ reflects Edwina Currie, surveying the view at the back of her garden above the town of Whaley Bridge.

It was this Peak District panorama which instantly persuaded the former Tory minister to buy this place several years ago.

Today, however, the view is very different. An RAF Chinook is thundering above the treeline with six huge sacks of rocks dangling from its belly.

Each bag weighs more than a ton but the pilot tiptoes into position like a ballerina before a precision dumping operation on to the battered, hollowed out slab of concrete below. 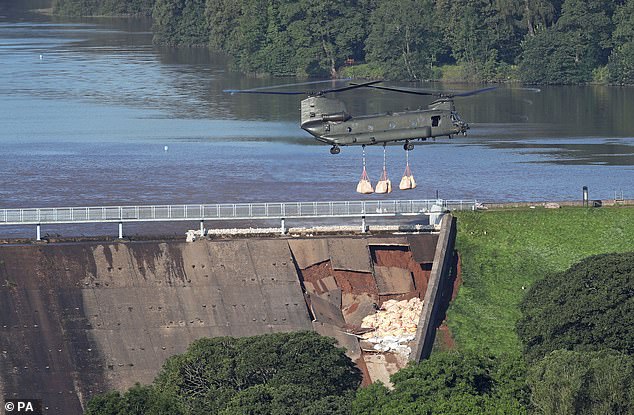 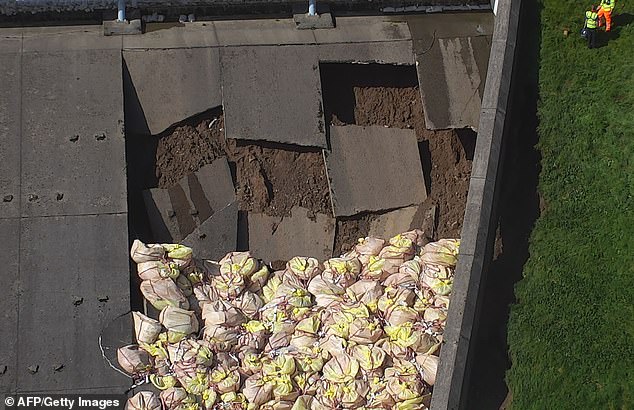 Birds-eye view: An aerial picture from the Derbyshire Constabulary shows bags of aggregate being used to cover the dam’s spillway today

Huge pipes stretch like giant straws along roads crammed with big red fire pumps, all furiously sucking thousands of gallons per second out of a mile-long pool of gravy-brown water.

At the centre of the drama is the spillway of the Toddbrook Reservoir, the weakest point in a ruptured wall which currently separates the 190-year-old man-made Derbyshire lake from the grand old mill and coal town below, not to mention the major railway passing through it.

Yesterday, the battle to keep the two apart replaced Brexit as the lead item on the Government’s agenda. Downing Street convened an emergency Cobra meeting, chaired by the new Defra Secretary, Theresa Villiers, in order to get a ministerial grip on the situation.

Last night, the gravity of the battle to save Toddbrook was underlined when the Prime Minister made a surprise flying visit. 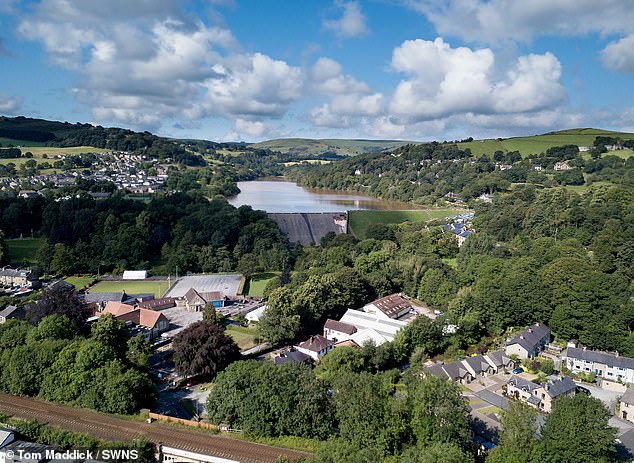 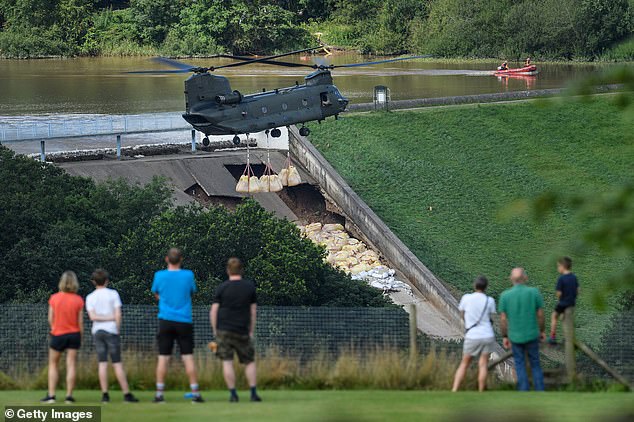 Residents watch from a nearby field as the aircraft dispatches its next load on to the dam’s broken wall. Emergency services check on the delivery from a boat nearby

Meeting residents at the local evacuation centre, Boris Johnson assured them that the dam was ‘dodgy but stable’. Quite how much solace they will have derived from his assurance that ‘you will all be properly housed’ in the event of a collapse remains to be seen. ‘I flew over the dam and it looks pretty scary. I can see the problem,’ he admitted.

He sympathised with Matthew and Lynn Lingard, fearing for the welfare of the two cockateils and two rabbits they had left behind. ‘That must be very worrying. Are you going to be able to go back and get them?’ the PM asked.

The couple said that they might have to wait another 48 hours.

Mr Johnson was clearly disturbed to learn that some residents were still refusing to leave homes which stand in the path of a breach in the dam. ‘We’ve got to sort that out,’ he told police officers. Departing amid the inevitable requests for selfies, he assured his hosts: ‘They’ve got a long way to go. Whatever we do, we’ll make sure we rebuild it.’

Though the state of the dam remains ‘critical’, according to its owners, the Canal and River Trust, the signs are that the battle is slowly being won. Water levels are now down by half a metre while the RAF has now deposited 200 tons of aggregate to counter the erosion and stabilise the spillway.

There is talk of residents being allowed limited access to their houses over the weekend. 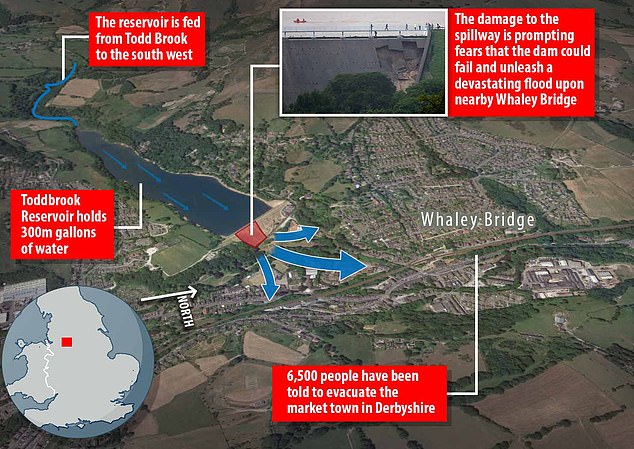 Where Whaley Bridge is in relation to the reservoir and the dam wall which has a hole in it, and the flow of the water

It is a sight as alarming as it is also deeply impressive, enhanced by the sheer majesty of the surrounding Peak District countryside. Think Last of the Summer Wine-meets-Hollywood disaster movie. I arrive to find frantic action in the sky and at the water’s edge while, down below, stands Whaley Bridge, a ghost town save for a few blue flashing lights and the odd snatch of officialdom in a hi-vis bib scurrying nervously about the most deserted streets in Britain. On hills for miles around, locals and hikers cheerfully absorb this surreal sight. Many have brought children and Thermos flasks to make a day of it.

There is absolutely no sense of panic, no anger, no finger-waving blame squawkers. I can’t even find anyone who wants to blame all this on ‘Tory cuts’ or ‘austerity’. They’re a stoical lot here in Derbyshire.

‘We’d never had rain quite like it so people can understand how something like this has happened,’ says David Lomax, a local councillor and a resident for 42 years.

On Thursday night, he was helping police evacuate the town as word spread. Only one resident refused to heed his advice. ‘He was in a house in Bridge Street. I did point out that the name of the road suggested it was not a good place to be.’ Mr Lomax later saw the man reluctantly heading for higher ground.

Early yesterday morning, when he should have been celebrating his party’s by-election win, the Lib Dem councillor was round at the emergency centre in nearby Chapel-en-le-Frith to check up on evacuees. He was pleasantly surprised to find the place almost empty. Of the 1,500 souls forced out of those homes in the danger zone, nearly all had been taken in by family and friends.

Delivery vans from Domino’s pizzas and the Co-Op among others had come laden with supplies but most people were coping well enough under their own steam. 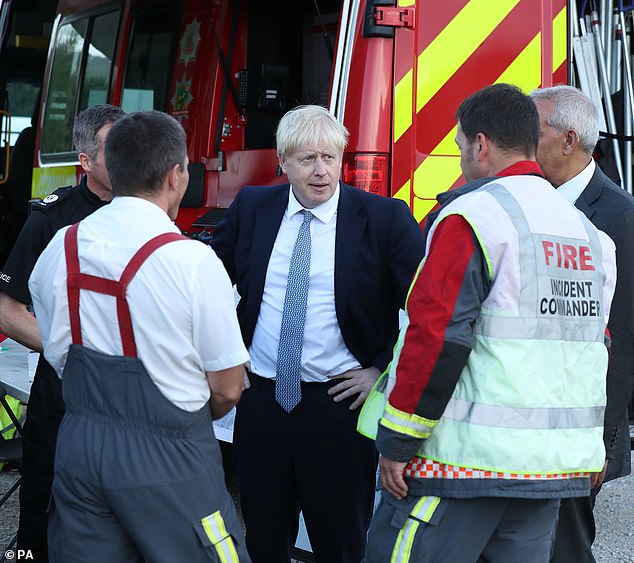 ‘People are like that in Derbyshire. We don’t do panic,’ says Edwina Currie proudly when I drop in for a coffee. ‘My impression is that everything that needs to be done is being done already.’

Like many people who had never heard of Toddbrook Reservoir until this week, I am a little surprised that a town of 6,500 people should be at risk from a dam built in 1830 and administered by a charity. There has been a lot of talk about ‘Victorian engineering’ but this thing is actually Georgian. It wasn’t built to supply water to homes and factories. It is a relic of the pre-railway era, built to supply water to Britain’s canal network.

Mrs Currie turns out to be well-read on the subject and allays my concerns. ‘It’s an earthenware dam of a type that was being built right up to the 20th Century and they’re always monitoring it,’ she says.

I wander round to the south side of the reservoir where there is a minor earthquake from behind a hedge. Suddenly a JCB crashes through, tearing down trees, fencing and a dry stone wall to reach the water’s edge. It paves the way for yet more pumps and is followed by a platoon of officials in hi-vis.

There is a buzz of excitement among a crowd of onlookers.

WAS SIZZLING JULY THE HOTTEST MONTH EVER RECORDED ON EARTH

Last month could have been the hottest of all time globally, according to provisional figures.

It already looks set to match July 2016 – the previous warmest July and hottest month overall ever recorded – but may even edge past it.

Early indications show July 2019 will have been around 1.2C (2.16F) above pre-industrial levels.

The provisional figures are based on July 1 to 29 from the European Union’s Copernicus Climate Change Service and the European Centre for Medium-Range Weather Forecasts.

Final figures will be published on Monday.

June 2019 has already been recorded as the hottest June in weather records, which start in 1880.

Record-breaking heatwaves gripped parts of the northern hemisphere in July, with the UK seeing a new high temperature of 38.7C (101.66F) set in Cambridge on July 25.

Climate expert Professor Richard Allan, from the University of Reading, said: ‘Months which break the temperature record, such as July 2016 and June and July 2019, are now the expectation rather than a surprise.’

Someone has spotted the next best thing to a Chinook in full flight. Over on the bridge across the dam, amid all the officials in orange bibs and hard hats, there is the deeply reassuring sight of a few chaps in khaki and berets.

The troops are actually part of the RAF team from RAF Odiham, checking up on the latest dump of rocks from their Chinook. But everyone feels in safe hands now that they have seen ‘boots on the ground’.

I chat to a group of residents who live a few yards from the water’s edge and are suddenly coming to terms with the fact that there is a very different side to the beauty spot before them.

Some reflect on the irony that the same RAF now saving the day practised their famous ‘Dambuster’ raid on the nearby Derwent Dam a few miles from here.

One middle aged man muses that in all the years of taking his children to the local primary school immediately below the dam, he did have the occasional nagging doubt.

‘I don’t like to mention the word Aberfan. But, well…’ Right now, their immediate concern is how to help a neighbour rearrange a long-planned 70th birthday bash.

‘It was meant to be down at the bowls club but that’s been sealed off so he’s got to move it up here,’ says Christine Gaduzo.

While all thoughts are, rightly, on the dam, teacher Julia Brownsword says that life without the reservoir would be unthinkable. For it is very much a hub of local activity, with a regular open water swimming club and a busy little sailing club, too. Come a sunny summer’s day, it’s not unusual to see hundreds of locals on or in this water.

‘We sometimes call it the Costa Whaley Bridge,’ says one. Just a few days before the recent deluge, the local Labour MP Ruth George was among a 90-strong group doing a swimming circuit around the buoys. It is a cliche to talk of the Blitz or Dunkirk spirit but it is an apt description for the stoicism here in Whaley Bridge. ‘I was having my tea when this policeman came round to say we had to get out fast,’ says plumber Connor Wigg, 22, as he watches another pirouette of the Chinook from Whaley Bridge Cricket Club.

‘He was very nice but I thought I’ll finish my tea and have a quick shower. Then I went up to stay at my Nan’s house. I’m not too worried about the dam. They’ll sort it out.’

The cricket club, surely one of the prettiest in England, will certainly have an interesting entry in the scorebook this weekend.

Today’s home match against Mottram has been cancelled. The club is under no threat whatsoever from the dam but half the team cannot get home to retrieve their kit. Though sunshine is forecast, the club records will note: ‘Rain stopped play – last week.’

– DEVASTATING flooding has also wrecked the 300-year-old National Trust property Lyme Park, in Cheshire, which provided the backdrop to the 1990s TV adaptation of Pride and Prejudice.

Paul Hollywood, 53, is dumped by his girlfriend Summer, 24,
Farage sips champagne with Georgia Toffolo after by-election