A swoon in global rates has swept the 10-year Treasury yield to its lowest level in nearly three years.

With that drop, the stock market is looking more attractive to yield hunters — more than half of S&P 500 companies now yield above the benchmark note.

One of those stocks looks especially good to JC O’Hara, chief market technician at MKM Partners.

“Often when you look for good-yielding stocks, they don’t have the best technical setup, but when we go through some of these names out there, Home Depot really jumps out at us, ” O’Hara said Wednesday on CNBC’s “Trading Nation. “

The Dow component offers a 2.6% dividend yield, higher than the 2% average on the S&P 500 and above the 10-year’s 1.7%. The home-improvement retailer has also outperformed the rest of the market this year, gaining 21% compared with the S&P 500’s 15% advance.

“We also have a great opportunity to buy a pullback. In early July, Home Depot broke out to all-time highs and then with the overall market weakness, it pulled back and it found support right on its 100-day moving average,” said O’Hara. “This is exactly where it bounced in March and again in May, so we think we get a nice bounce off the 100-day, right around the $200 level. I think we’re setting up nicely to retest the old highs at $220.” 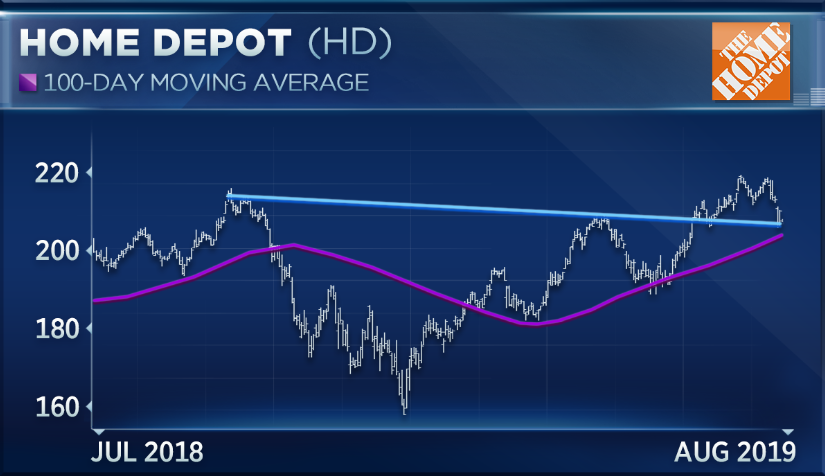 Boris Schlossberg, managing director of FX strategy, says another Dow stock is on its way to recover record highs.

“If you want to stay defensive but still stay offensive at the same time, I really like Coke because it’s completely defensive in the sense that it’s not sensitive to the capex cycle of the global economy. It’s doing very well organically with its portfolio of beverages, ” said Schlossberg.

“It just posted all-time highs then filled that gap and now seems to be doing well on the way up so I just like it on a momentum basis, on a fundamental basis and generally as a defensive play in the case the market does go down,” said Schlossberg.

Coca-Cola posted an all-time high two weeks ago, but has fallen back 3%. It is one of just four positive Dow stocks over the past week.