Western economists have long said that China needed a base of American-style consumers to bring the country sustained economic growth. Now China has one: Its young people.

While previous generations were frugal savers—a product of their years growing up in a turbulent economy with a weak social safety net—the more than 330 million people born in China between 1990 and 2009 behave much more like Americans, spending avidly on gadgets, entertainment and travel.

The freewheeling consumption is helping China diversify its economy at a crucial time. Beijing has relied on exports and infrastructure-building to drive growth for decades, but recent signs point to a slowdown amid tariffs from the Trump administration. The new spending patterns have benefited

and other tech companies, whose rapid growth has helped energize China’s economy.

Yet all this consumption has a downside. Household debt levels have risen rapidly over the past several years, with many young Chinese borrowing money for their purchases.

High levels of corporate and government debt are already longstanding concerns for Beijing. As household debt climbs, some economists worry the country’s debt burdens overall could become unmanageable and weigh on China’s growth.

To avoid problems down the road, some economists say, household borrowing will have to slow to more sustainable levels, adding another headwind to China’s economy. In a worst-case scenario, they say, the combination of high government, corporate and consumer debt could exacerbate the economic slowdown and trigger a broader loss of confidence in China.

Liu Biting, 25 years old, says she spends all of her paycheck each month: 10,000 yuan ($1,400) a month from her marketing job in Shanghai. About a third goes to rent, and the rest on food, her sewing hobby, going out, music and other products. So far, she has avoided falling into debt.

Until recently, one of her monthly expenses was a clothing rental subscription that cost $70 a month. She liked it, she says, because she could “try out a lot of strange clothes.” She discovers makeup brands on a WeChat account she follows that recommends products, many of them local.

“For my parents’ generation, for them to get a decent job, a stable job, is good enough—and what they do is they save money, they buy houses and they raise kids,” she says. “We see money as a thing to be spent.”

Her parents repeatedly ask her how much she has saved in her three years of working. “I say, ‘I’m sorry, probably nothing.’ All my friends are like this. We have no savings and we don’t really care about it.”

told reporters in November. People born after 1990 made up nearly half the customers during the latest “Singles Day” annual shopping event, when Alibaba sold roughly $30.8 billion of merchandise in 24 hours.

Almost a quarter of car buyers in China are under 30, and that figure is expected to rise to roughly 60% by 2025, says

head of market research and customer intelligence for

China. She says Volkswagen sees Chinese customers under 30 as crucial to its future in the country. The company is rolling out three entry-level models geared toward young drivers in China’s less developed cities this quarter.

The spending is also helping power local brands including Heytea, an upscale tea salon, and

competitor Luckin Coffee, which raised about $571 million after going public earlier this year.

Chinese youths are especially more willing to pay for travel. A report last year by Mastercard and Ctrip.com, China’s biggest online travel website, found that about one-third of China’s outbound tourists who booked with Ctrip were born after 1990, and they spend more on a single trip than those born in the 1980s.

Short-term loans from online lenders such as Ant Financial Services Group are helping fuel the spending. Ant Financial charges rates up to nearly 16% on an annualized basis, depending on the credit profile of the borrower. A 2018 survey in China by Rong360, a loan recommendation website, found that around half of respondents who took out consumer loans were born after 1990.

Most had borrowed from multiple lending platforms, the survey found, and nearly a third took out short-term loans to repay other debts. Nearly half of them had missed payments.

One of the most popular ways to borrow is a Huabei account, a revolving credit line embedded in China’s Alipay mobile payments network. Huabei has extended loans in excess of 1 trillion yuan, or more than $140 billion, since its launch in April 2015, a person familiar with the matter said. Ant Financial, which owns Alipay, declined to disclose any figures related to Huabei.

warned last November that the rise of fintech, while helping develop the consumer credit market, may “excessively induce” the younger generation to spend beyond its means.

Yang Huixuan, 22, who graduated from college this year and works in communications for a soccer club in Nanjing, says she turned to Huabei while in school. She says she often borrowed around $100 a month to pay for meals out, cosmetics and clothes that she couldn’t cover with the roughly $215 stipend she got every month from her parents. She relied on Huabei’s installment payment function to afford bigger items like cameras and smartphones.

Huabei is “truly addictive,” says Ms. Yang, “It gives me an illusion that I’m not really spending my own money.” Ms. Yang says she’s scaling back some now because of higher living costs and because she’s reluctant to keep turning to her father for money.

An Ant spokesman says Huabei encourages its users to spend responsibly, and gives users the option to set monthly limits to help monitor their own spending.

Easy credit has come from a wave of online micro-lenders and peer-to-peer lenders, which proliferated several years ago amid loose regulations. Some charged exorbitantly high interest rates.

Authorities have halted issuing licenses to new online lenders since late 2017, and tightened oversight to ensure interest rates on some loans are capped at an annual percentage rate of 36%. As of July, fewer than 800 peer-to-peer lenders remained in operation, from more than 2,600 in early 2016, according to industry website wdzj.com.

The average consumer spending of Chinese credit-card holders between ages 21 and 30 in 2016 was around $8,820, 39% higher than their average credit line of $6,360, according to data from Oliver Wyman, a New York-based consulting firm. Consumers can spend more than their credit limits by taking out additional loans from other channels, such as online lenders, or with subsidies from family.

Wang Xinyu, 24, says he has about $11,200 in debt spread over six credit cards, much of it accrued when he was in college and found it easy to swipe cards to pay for everyday expenses.

Mr. Wang, who earns about $600 a month working at a Beijing bookstore, says he now puts his entire salary toward paying down his debt. He still relies on credit cards to pay for food and rent, and sometimes uses one credit card to pay back another.

Young people in China are being “pushed by the tide of the era” in their reliance on easy credit to pay for things, he says.

estimates China’s ratio of household debt to gross domestic product will climb to 61% by 2020. That’s up from 26% in 2010 and higher than current levels in Italy and Greece.

By another measure—the ratio of household debt to disposable income—China appears to have already surpassed the U.S. Its ratio reached 117.2% in 2018, up from 42.7% in 2008, according to calculations by Lei Ning, a researcher at the Institute for Advanced Research at Shanghai University of Finance and Economics. The U.S. peaked at 135% in 2007 and dropped to 101% in 2018.

China has passed the U.S. in one measure of debt, and is catching up in another. 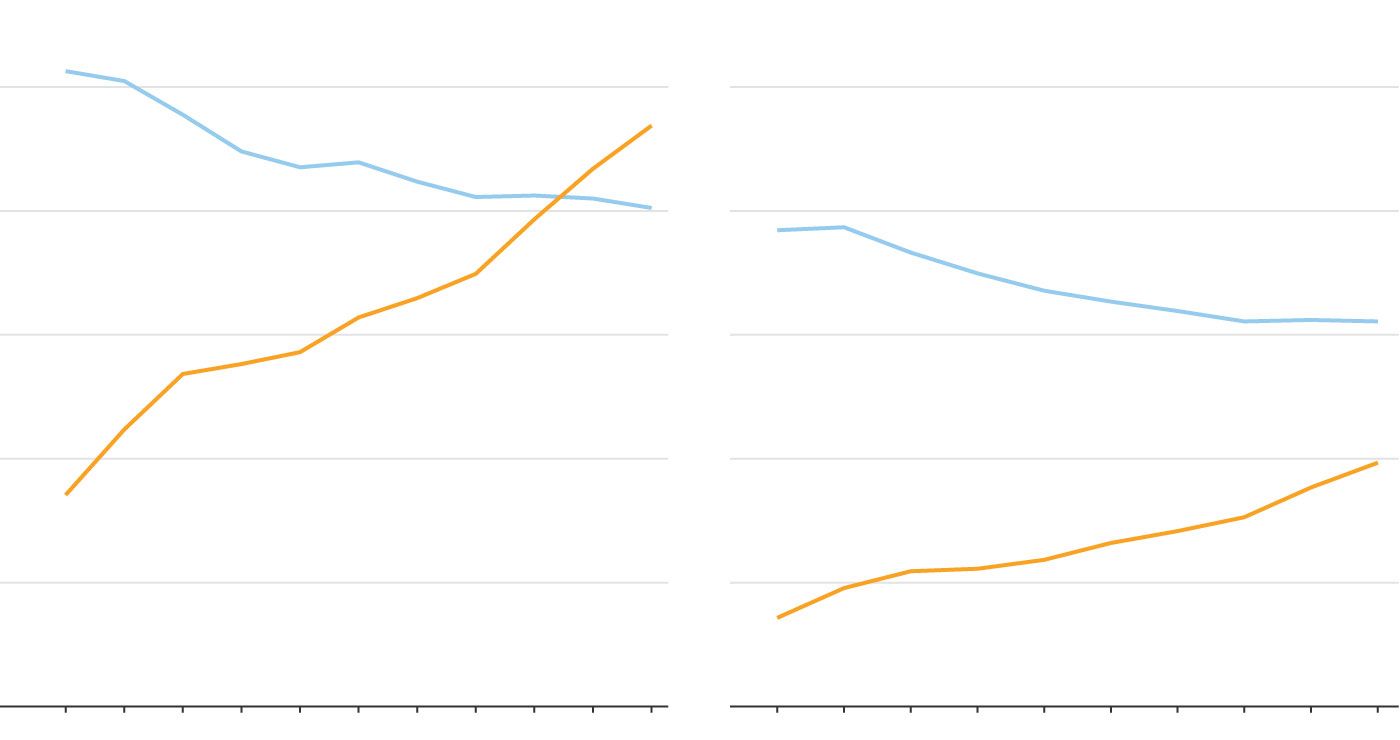 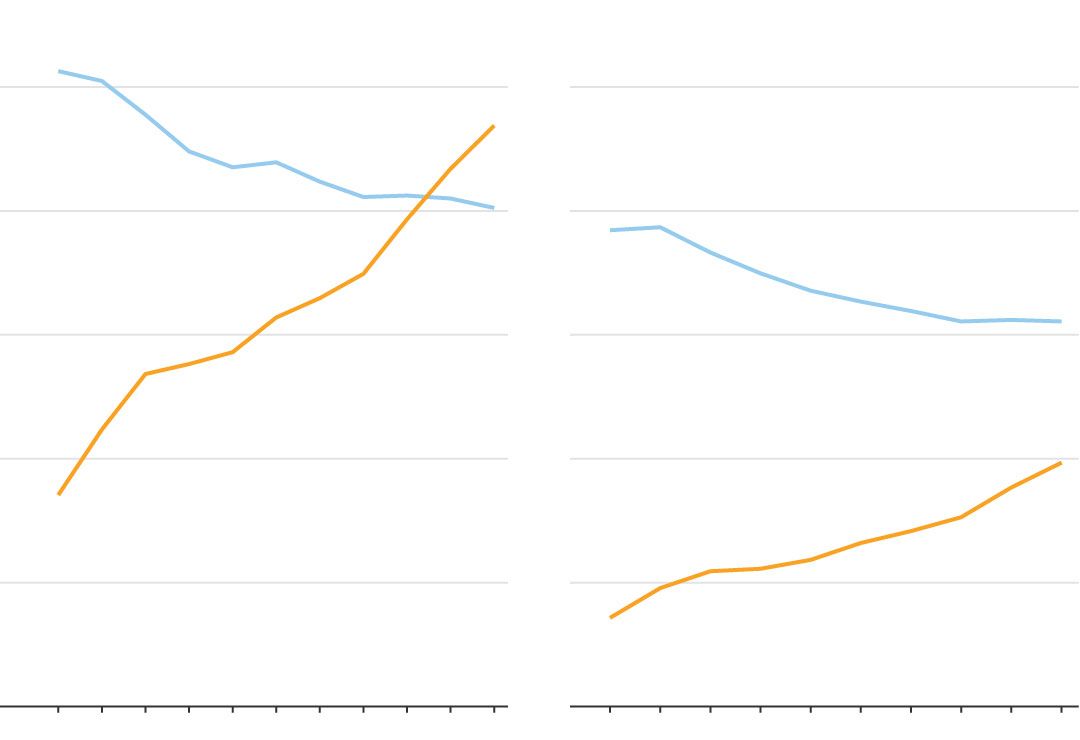 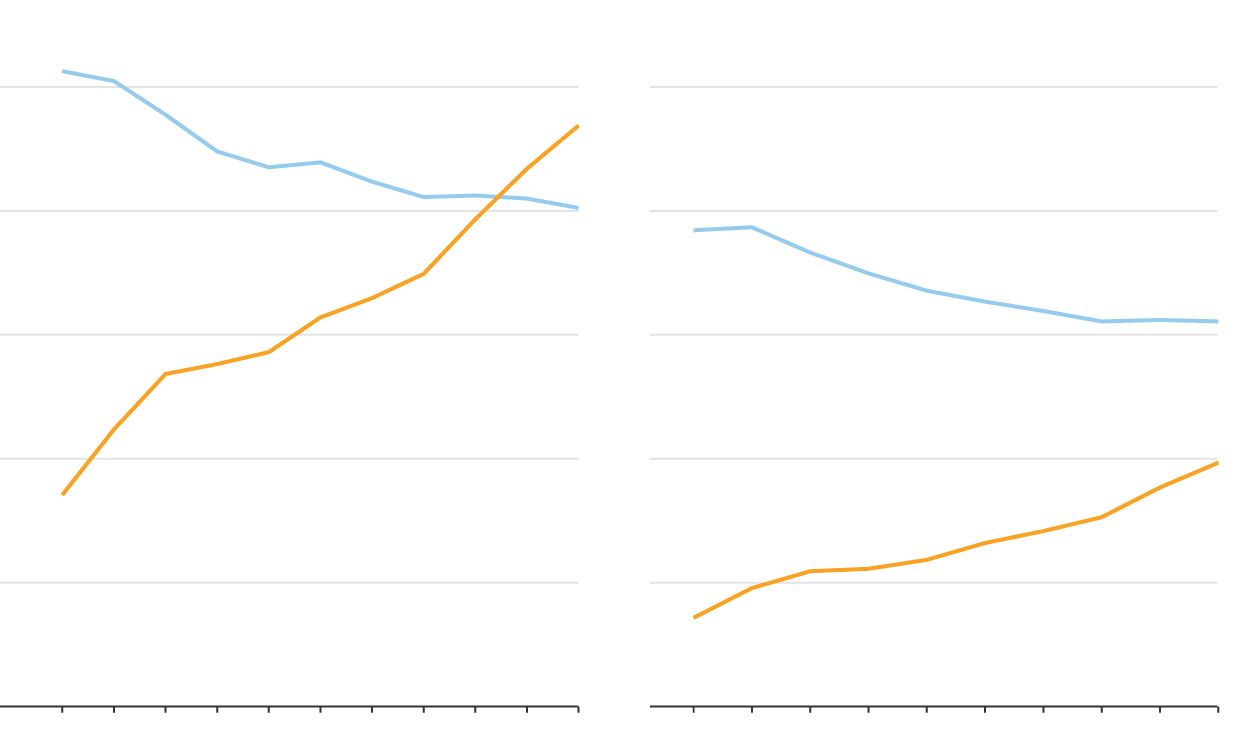 Some economists remain unconcerned by the rise in household debt, noting that default rates with consumer loans appear relatively low.

One fear, others say, is that China’s slowdown could be exacerbated if young Chinese lose their jobs or see their wages cut, and have to sharply curtail spending. If they don’t and continue falling into further debt, they could become even more vulnerable in future years.

As the U.S. saw in the 2008 financial crisis, default rates can shoot up rapidly when growth slows.

This generation “has no idea what a rainy day feels like,” said

an economist at Credit Suisse in Hong Kong. “Any consumer credit boom will always be tested—no exception,” he says.

He points to mortgage debt as a deepening problem across China’s economy, including for young people. Mortgage debt outstanding grew from $1.1 trillion in the fourth quarter of 2012 to $3.9 trillion as of June.

Mortgages accounted for about a third of China’s medium- to long-term loans, up from 20% in 2012, according to the People’s Bank of China.

How will young consumers’ spending affect China’s economy? Join the discussion below.

Parents often help young Chinese to buy a home, which Mr. Tao sees as a danger, with multiple generations now required to afford a single property. A similar phenomenon occurred in Japan in the 1980s, he says, sometimes with three generations helping to pay for a mortgage—a sign the market was overheated. Japan’s economy eventually entered a protracted slowdown as equity and real-estate asset prices corrected.

China’s slowing job growth adds to the challenge. This year, more than 8.3 million college students are expected to graduate, compared with around six million a decade ago and only 165,000 in 1978. Yet some of China’s most desirable employers, like e-commerce company JD.com Inc., have cut jobs as growth ebbs. Last year, a record 2.9 million individuals took the entrance exam for graduate school.

a 26-year-old who works in human resources for the German technology company Robert Bosch GmbH in Shanghai, says he feels more economic pressure now, including a need to help care for his parents. He is living with them at home while an apartment he recently bought—with his parents’ help—is undergoing renovations.

Still, he says he “can’t do mundane jobs that require me to follow the rules” and would like to keep spending on products “that help improve my living environment, like high-quality towels and aromatherapy products.” While his parents are reluctant to spend on fine dining and travel, he aims to travel twice a year, including recent trips to Japan, Cambodia and Thailand.

“For me, if the money isn’t spent on enriching your spirit and bringing you happiness, then what’s the point? Are we supposed to live so that we can save money?”

—Bingyan Wang contributed to this article.