Hurricane Dorian, a Category 5 storm, has become the strongest hurricane on modern record to hit the northwestern Bahamas, the National Hurricane Center said Sunday, and was moving toward Grand Bahama Island on Sunday afternoon.

In an earlier update, federal forecasters had warned that the storm had become extremely intense, and cautioned people to remain alert even though current predictions don’t have the storm making landfall on the U.S. mainland.

“A small deviation to the left of the track could bring the intense core of the hurricane and its dangerous winds closer to or onto the coast,” they said.

Forecasters said the core of the storm was likely to slow as it continued to sweep through the Bahamas, with Dorian expected to move near to or over the Grand Bahama Island late Sunday and into Monday. It is then predicted to take a northward turn toward Florida’s east coast, where some coastal residents have been put under evacuation orders.

“Dorian is expected to remain a catastrophic hurricane during the next few days,” forecasters said in a 2 p.m. update.

prime minister of the Bahamas, called Dorian a historic storm that could bring storm surges washing over some island rooftops. He worried about island residents who hadn’t heeded calls to move to safety.

“This will put us to a test that we’ve never confronted before,” Mr. Minnis said in a Sunday afternoon press conference. “This is a deadly storm and a monster of a storm.”

The storm had grown larger, with hurricane force winds extending up to 45 miles out from Dorian’s center. It had maximum sustained winds of about 185 miles an hour, and was moving west at about 7 miles an hour.

In Florida, mandatory evacuation orders were issued for low-lying and other at-risk areas in Martin and Palm Beach counties, including the area where President 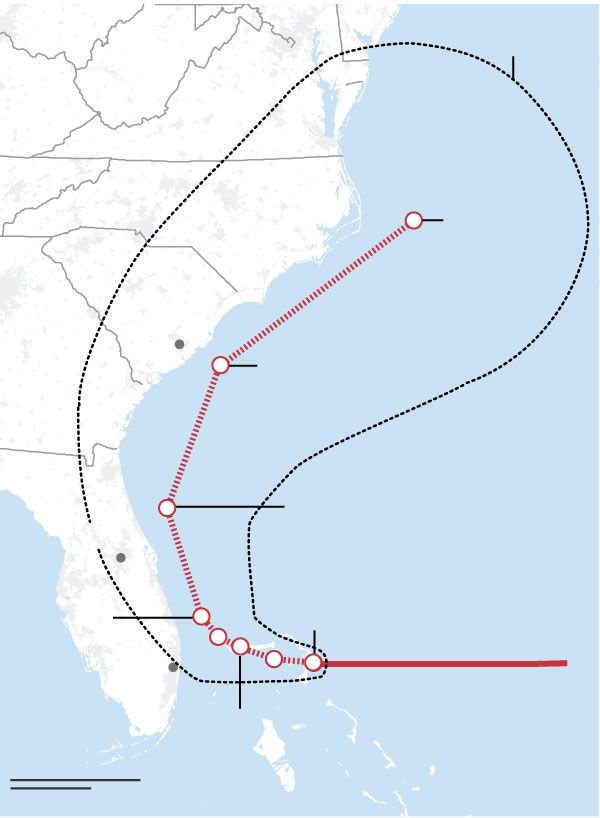 Though forecasts show the storm is unlikely to make landfall in the state, that remains a possibility, the hurricane center said. A tropical storm warning was in effect from Deerfield Beach north to Sebastian Inlet. The storm is forecast to then march north toward Georgia and the Carolinas, causing flooding and strong winds.

“Even if it doesn’t directly strike Florida, this is a big, powerful storm,” he said. “You’re still looking at significant impacts even if the storm remains hugging the coast.”

The Florida counties of Glades, Hendry, Osceola and Palm Beach issued voluntary evacuation orders for low-lying areas, according to the state’s Division of Emergency Management.

declared a state of emergency on Saturday. “Given the strength and unpredictability of the storm, we must prepare for every possible scenario,” he said.

declared a state of emergency for 12 of the state’s counties.

has declared a state of emergency. He said the storm is already kicking up dangerous surf and riptides along the state’s coast.

Mr. Trump told reporters on Sunday at the White House that Dorian “seems to be one of the biggest hurricanes that we’ve ever seen,” adding that it’s a “very, very powerful” storm.

During a briefing at Federal Emergency Management Agency headquarters Sunday afternoon, Mr. Trump said the hurricane’s effects “will be felt hundreds of miles or more from the eye of the storm and long before it potentially makes landfall.” The president said most of the Eastern Seaboard will be affected, “and some of it very, very severely.”

On Twitter earlier Sunday, Mr. Trump warned that South Carolina, North Carolina, Georgia, and Alabama will “most likely be hit (much) harder than anticipated.”

“BE CAREFUL! GOD BLESS EVERYONE!,” he tweeted.

White House officials said President Trump received hourly briefings about the hurricane on Saturday. The president spent part of the day at his golf club in Virginia, before returning to Camp David, where he is spending the weekend. He made no public remarks on the hurricane, aside from Twitter messages in which he implored the public to be safe. He also retweeted safety information from federal authorities.

said it was necessary for the president to remain in the U.S. “Obviously, being here domestically is better,” she said. “We’re more nimble and all his agencies are here.”

Airlines added extra flights over the weekend and eased restrictions on ticket changes, though some carriers closed services to prevent aircraft and crews being caught by the storm.

one of the biggest operators at Fort Lauderdale-Hollywood International Airport, had canceled a fifth of its total flights Sunday, according to FlightAware, an air travel tracking service.

the acting administrator of the Federal Emergency Management Agency, said the track of Dorian remained uncertain near Florida and the south Atlantic seaboard and he urged residents in its path to remain vigilant.

“Don’t dismiss this storm. We are not out of it,” Mr. Gaynor said on “Fox News Sunday.” “Life-threatening, dangerous surge, water, wind is coming your way. Take the time now to prepare you and your family.”

Mr. Gaynor was asked about the Trump administration’s recent decision to shift more than $100 million in federal disaster aid to provide for more detention beds for migrants near the U.S.-Mexico border. He said the shift was “not affecting our preparedness whatsoever for Dorian.”

said Sunday that federal money earmarked for transfer from disaster relief to border issues hadn’t yet been moved and that there had been no impact on the government’s ability to respond to the hurricane because of it.

Trump administration officials said President Trump had been actively involved in preparations for Dorian and was closely tracking the storm. Mr. Gaynor said the president “has his finger on the pulse” of the storm.

who joined the president at Camp David to receive hurricane updates on Saturday, said Mr. Trump received updates throughout the day, including during a golf outing.

“We got updates while I was [at Camp David.] He got updates, I know he played golf yesterday and he got updates while he was playing golf and then we had a longer update at 4 o’clock and we talked about it after that,” the senator said on “Fox News Sunday.” “So he was constantly getting updates.”