Hurricane Dorian finally moved away from the Bahamas on Tuesday, after devastating several islands and leaving at least five people dead, and began crawling toward Florida as a Category 2 storm.

The storm, which struck the northwestern Bahamas as a Category 5 hurricane, razed houses and businesses and left stranded residents in need of rescue. The Abaco Islands and Grand Bahama Island suffered catastrophic damage, officials there said, and aid groups mobilized to provide food, water and medical supplies. 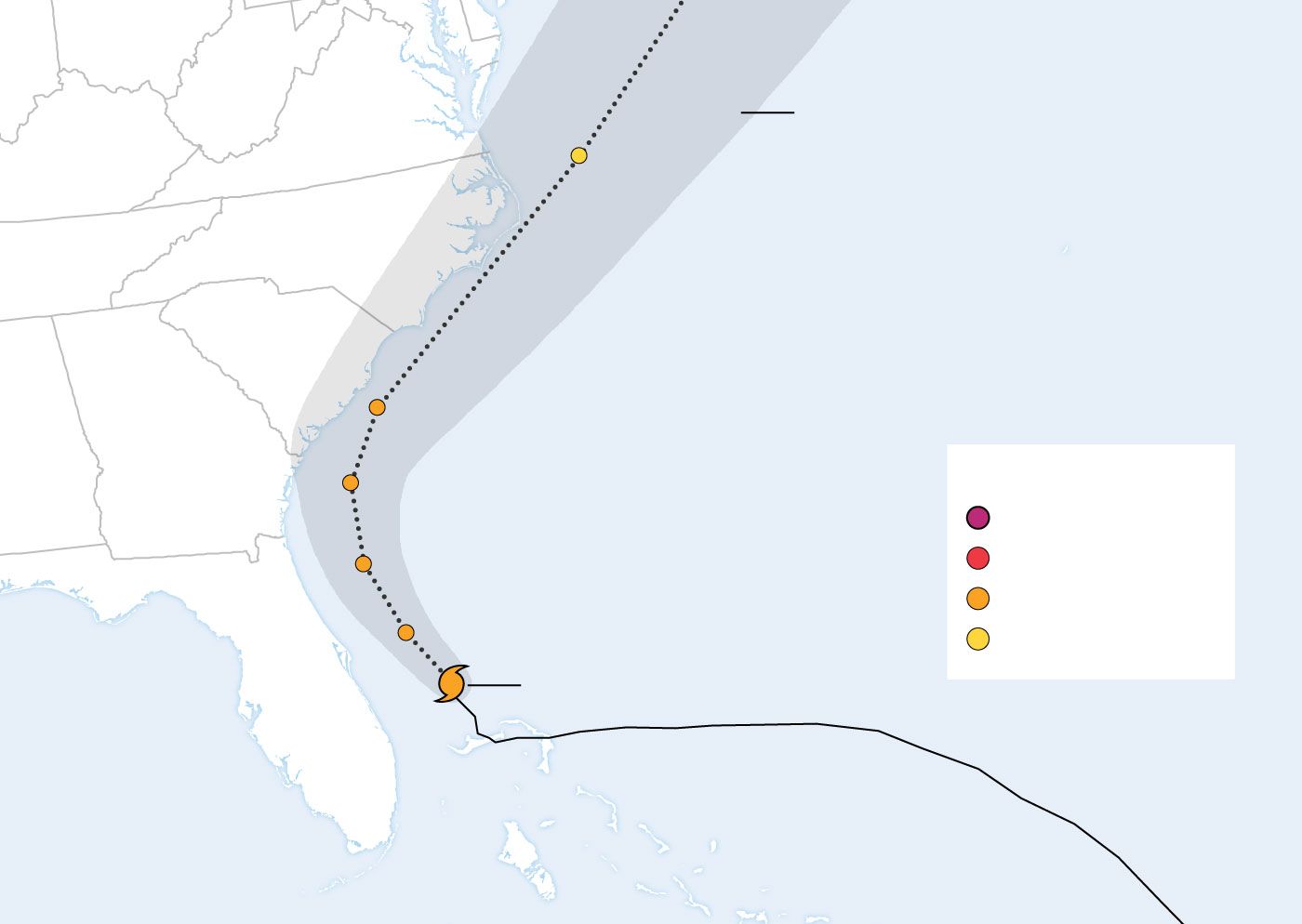 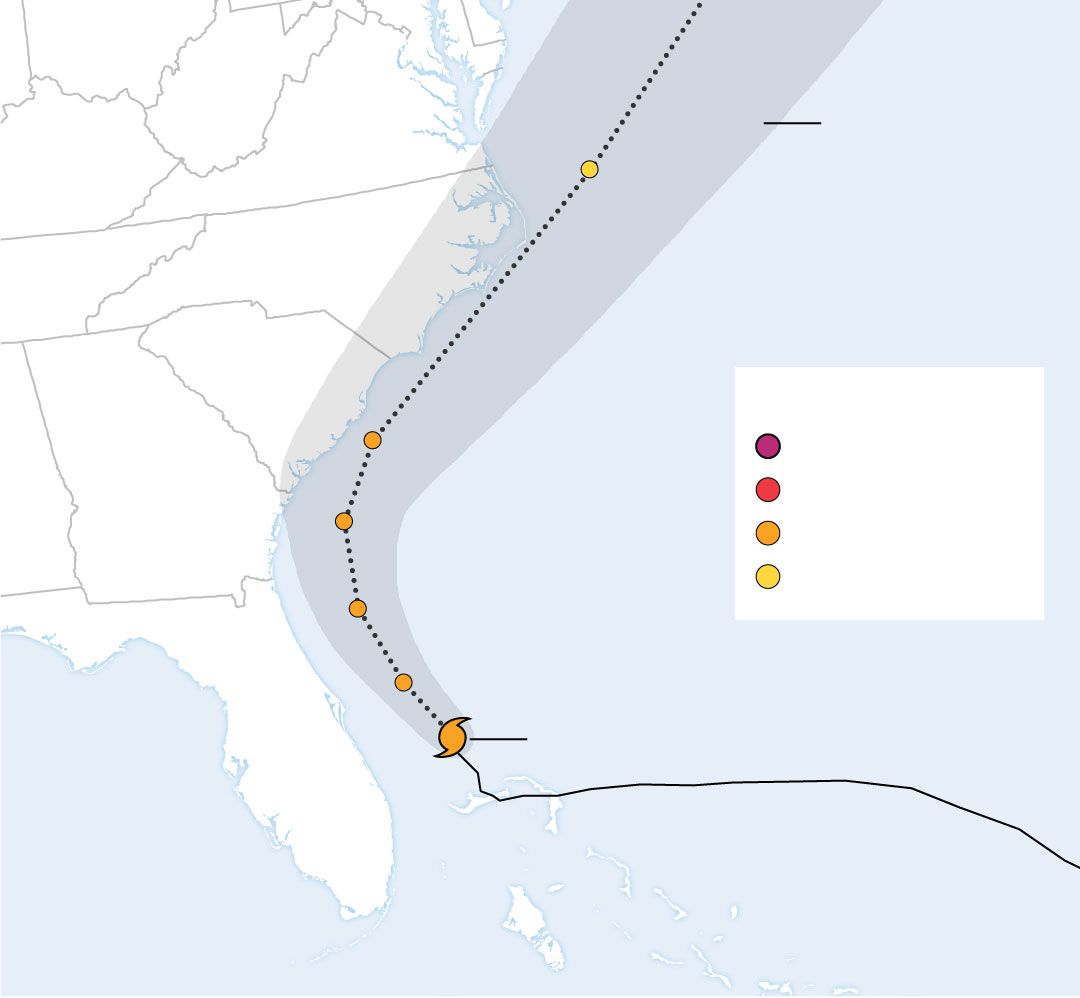 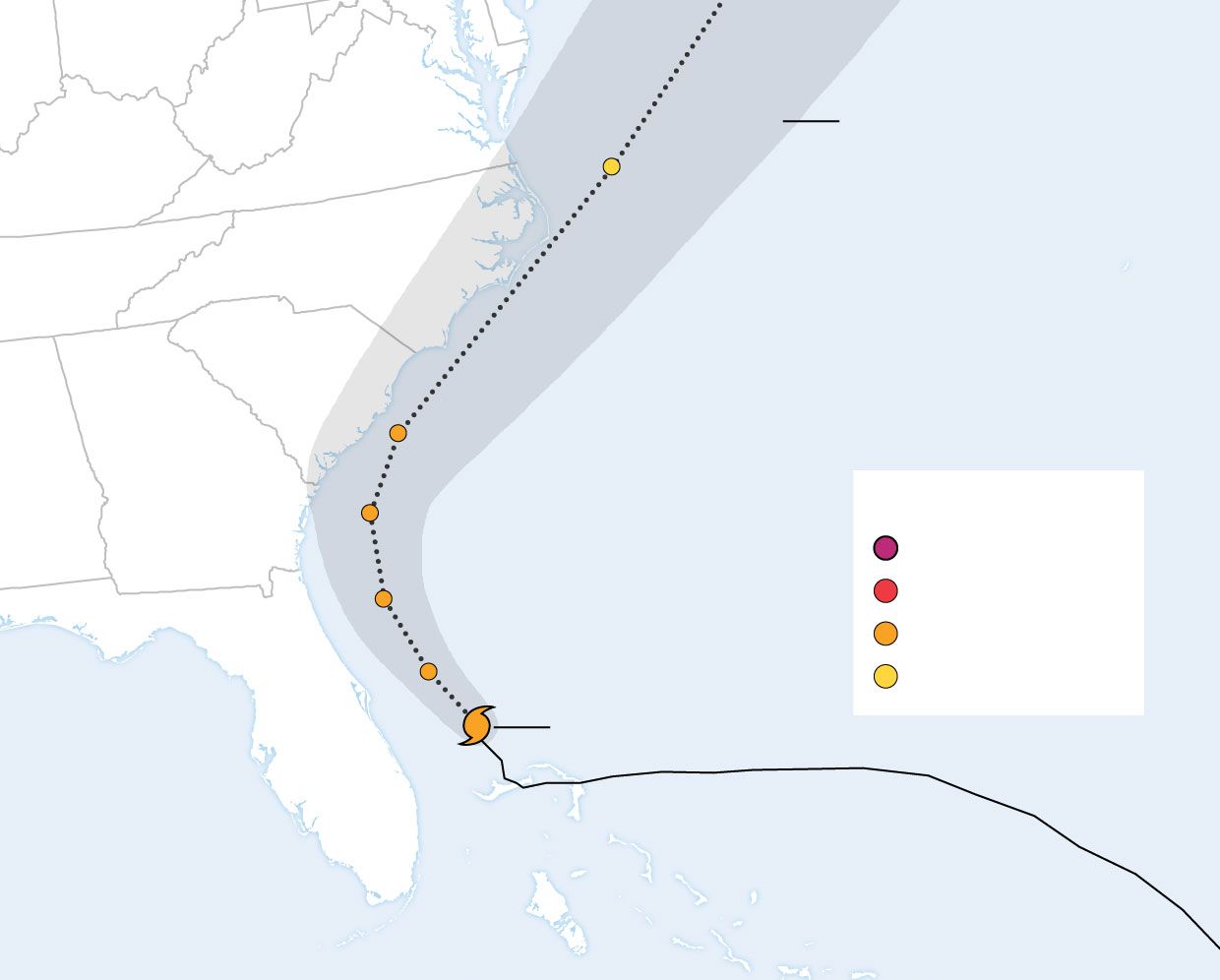 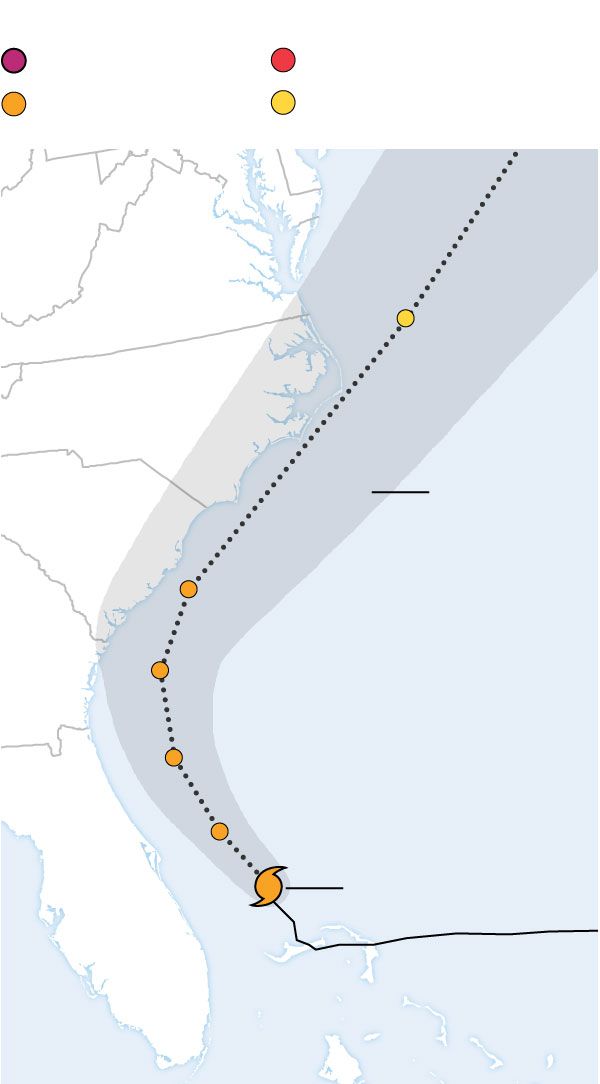 With winds of 110 miles an hour, Dorian churned just north of Grand Bahama Island on Tuesday afternoon, moving northwest at 5 miles per hour, according to the National Hurricane Center.

The storm was projected to approach dangerously close to Florida late Tuesday and Wednesday, and then to turn north, skirting the coast and coming near Georgia and South Carolina on Wednesday night and Thursday.

A car sits submerged in water from Hurricane Dorian in Freeport, Bahamas, on Tuesday.

A car sits submerged in water from Hurricane Dorian in Freeport, Bahamas, on Tuesday.

Florida Gov. Ron DeSantis thanked Floridians for being patient and prepared in the lengthy lead-up to Dorian, as the path and potential impact changed repeatedly. He said he was grateful Florida was poised to dodge the worst of Dorian.

No parts of Florida had a higher than 7% chance of seeing hurricane-force winds, federal forecast data showed. While hurricanes that have been downgraded can regain strength, forecasters didn’t expect much change to Dorian’s intensity in the next couple of days.

But federal forecasters warned that “the increasing size of Dorian’s wind field along with any deviation to the left of the forecast track will bring hurricane-force winds onshore along portions of the Florida east coast.”

Mr. DeSantis expressed sympathy for the people of the Bahamas, and said he was prepared to send state resources north to Georgia and the Carolinas as needed.

Bahamas Prime Minister Hubert Minnis said Monday that the Royal Bahamas Police Force had confirmed five deaths in the Abaco Islands. “We are in the midst of a historic tragedy in parts of the northwestern Bahamas,” he said Monday, adding that the government’s focus now was search, rescue and recovery. He said initial reports from the Abaco Islands were that “devastation is unprecedented and extensive.”

As many as 13,000 homes may have been severely damaged or destroyed, according to an initial assessment by the International Federation of Red Cross and Red Crescent Societies. In the Abaco Islands, wells were likely contaminated by tidal surge, leaving the water and sewer utility in need of pumps and equipment, according to the Caribbean Disaster Emergency Management Agency.

Late Monday night, officials posted a plea from emergency-management personnel and police for residents with heavy-duty equipment to help with rescue operations.

The hurricane was the strongest on modern record to strike the northwestern Bahamas.

Scientists who have studied the impact of climate on storms have broadly concluded that warmer air and warmer water temperatures are expected to increase the intensity of hurricanes, generating storms with more rainfall and wind speed. Evidence suggests this is already occurring. One study, cited by the U.S. government’s 2018 National Climate Assessment, found the “heaviest rainfall amounts from intense storms, including hurricanes, have increased by 6% to 7%, on average, compared to what they would have been a century ago.” Scientists, however, don’t agree whether the frequency of hurricanes is affected by a changing climate.

As a hurricane’s strength intensifies, so does its potential to cause flooding along the coast. 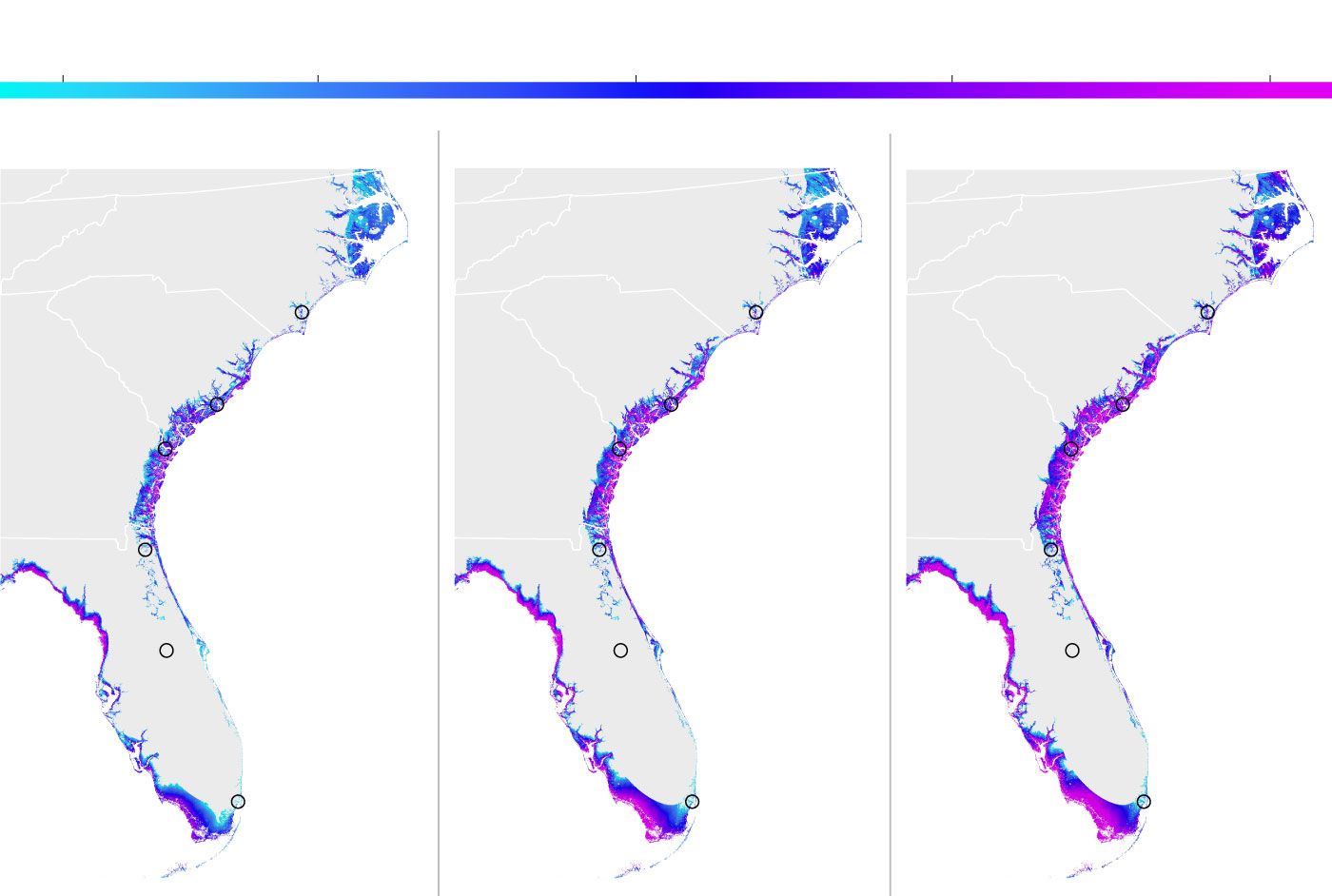 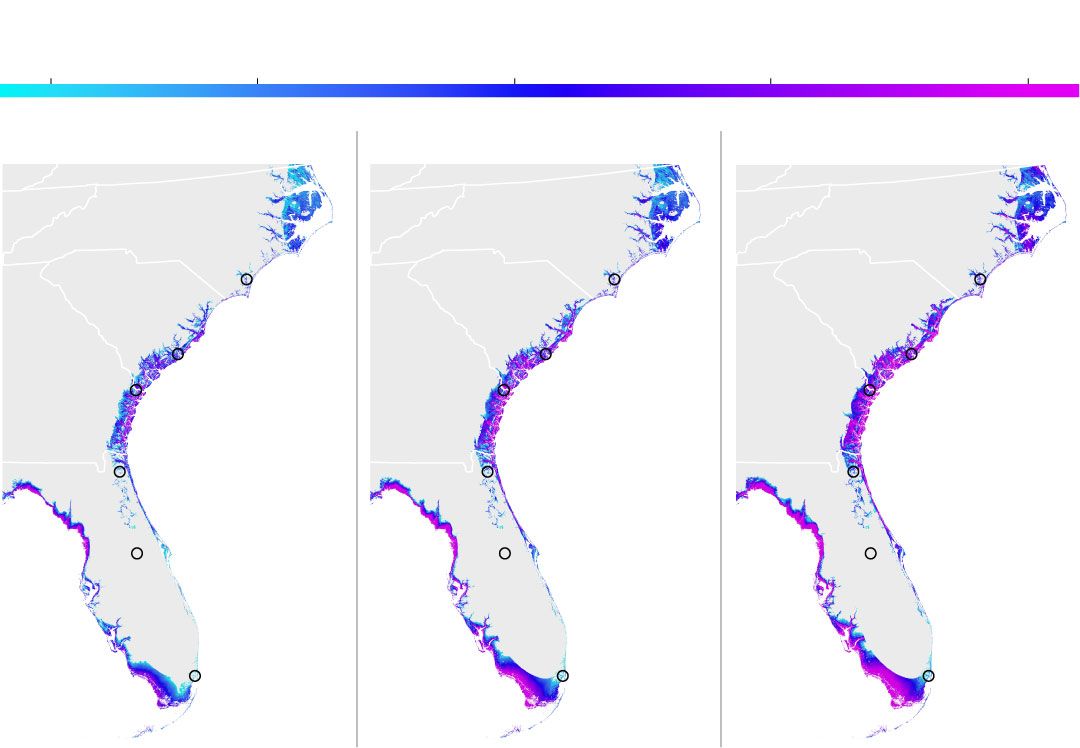 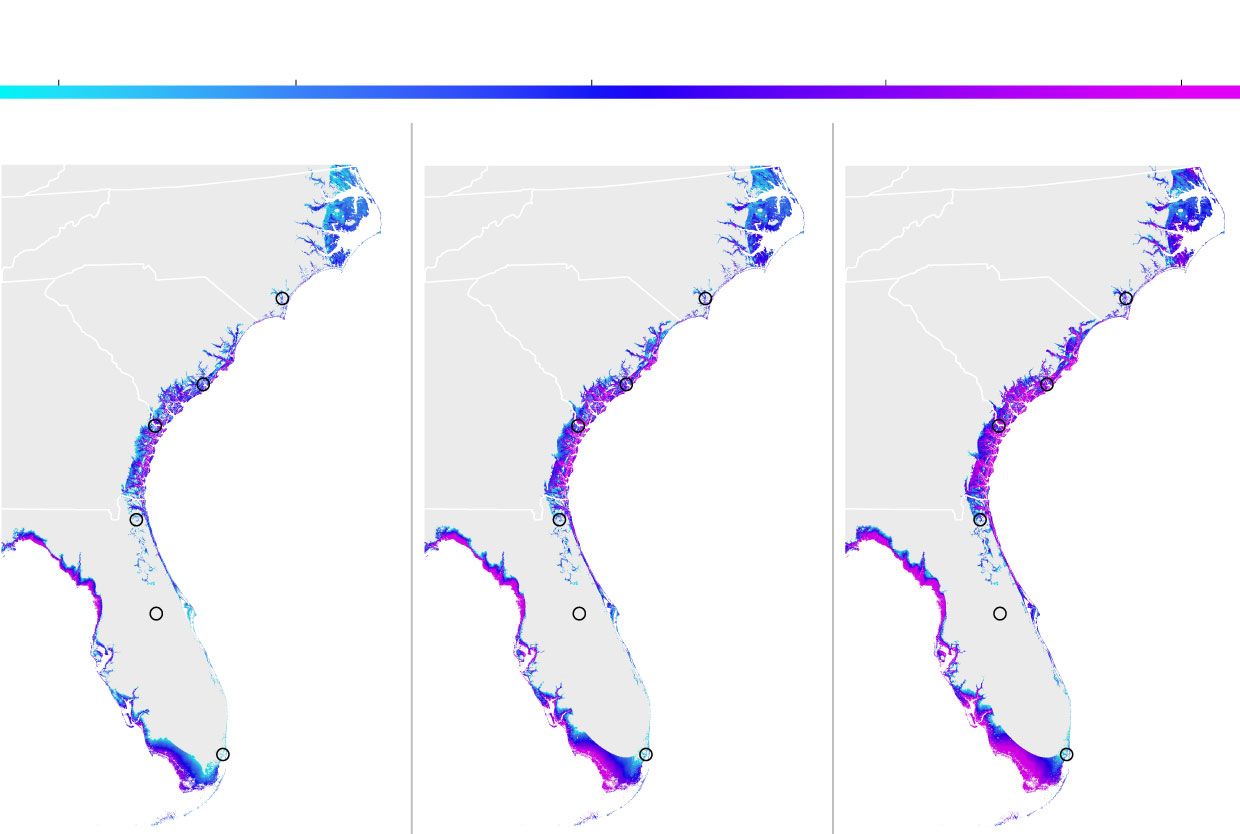 A hurricane warning was in effect from Jupiter Inlet in Palm Beach County to Ponte Vedra Beach in northern Florida.

In Melbourne Beach, Fla., Vanessa Brancheau said she and her husband and three children planned to stay put in their house a half-block from the ocean. Although also under a mandatory evacuation order, she said she had faith the family would be safe during the storm.given its shift to the east.

“I’m very confident that it’s not going to get crazy,” she said.

Ms. Brancheau and her husband stocked up on food, fuel and propane. They have a battery-powered radio and board games to entertain the children—ages 10, 7 and 3—in the event of a blackout.

Eight Florida hospitals and about 110 assisted-living facilities and nursing homes evacuated ahead of Dorian’s arrival off Florida’s east coast, according to state health-care trade groups. One hospital was scheduled to reopen Tuesday evening. For those that have remained open, Dorian’s strength, unpredictable path and slow progress have complicated preparations for the storm and immediate recovery.

HCA Healthcare Inc., one of the nation’s largest hospital companies, had dispatched 34 generators as of Thursday to serve as backup generators to the emergency generators already in place at HCA hospitals in Florida, said Jonathan Perlin, the company’s chief medical officer.

As Dorian slowed and predictions showed it turning to travel up the east coast, HCA made similar preparations along its new path, he said. But the company left in place many of the backup generators in Florida as forecasters warned Dorian’s path may be uncertain, he said. “Prudence dictated we keep them in Florida,” he said.

Florida Power & Light Co. said Monday it had some 17,000 utility workers ready to respond to outages caused by Dorian. “Customers should stay vigilant as significant parts of our service territory remain within the cone of uncertainty,” said Chief Executive Eric Silagy. “This is a challenging and very slow-moving storm.”

States of emergency were in effect in Florida, Georgia, North Carolina, South Carolina and Virginia.

Forecasts of Dorian’s track have fluctuated in the past week, making it difficult to predict where, or if, the storm will make landfall in the U.S. 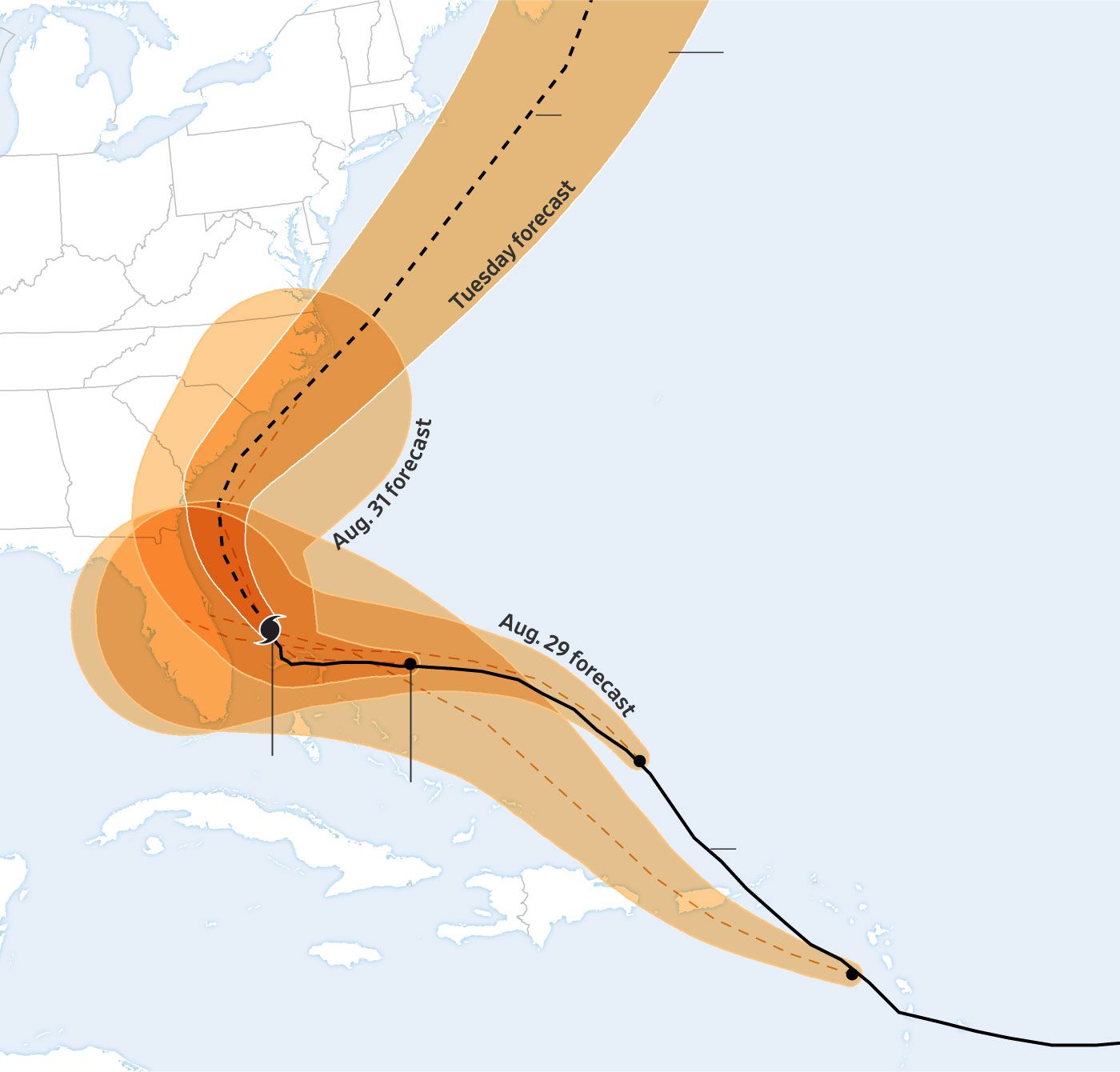 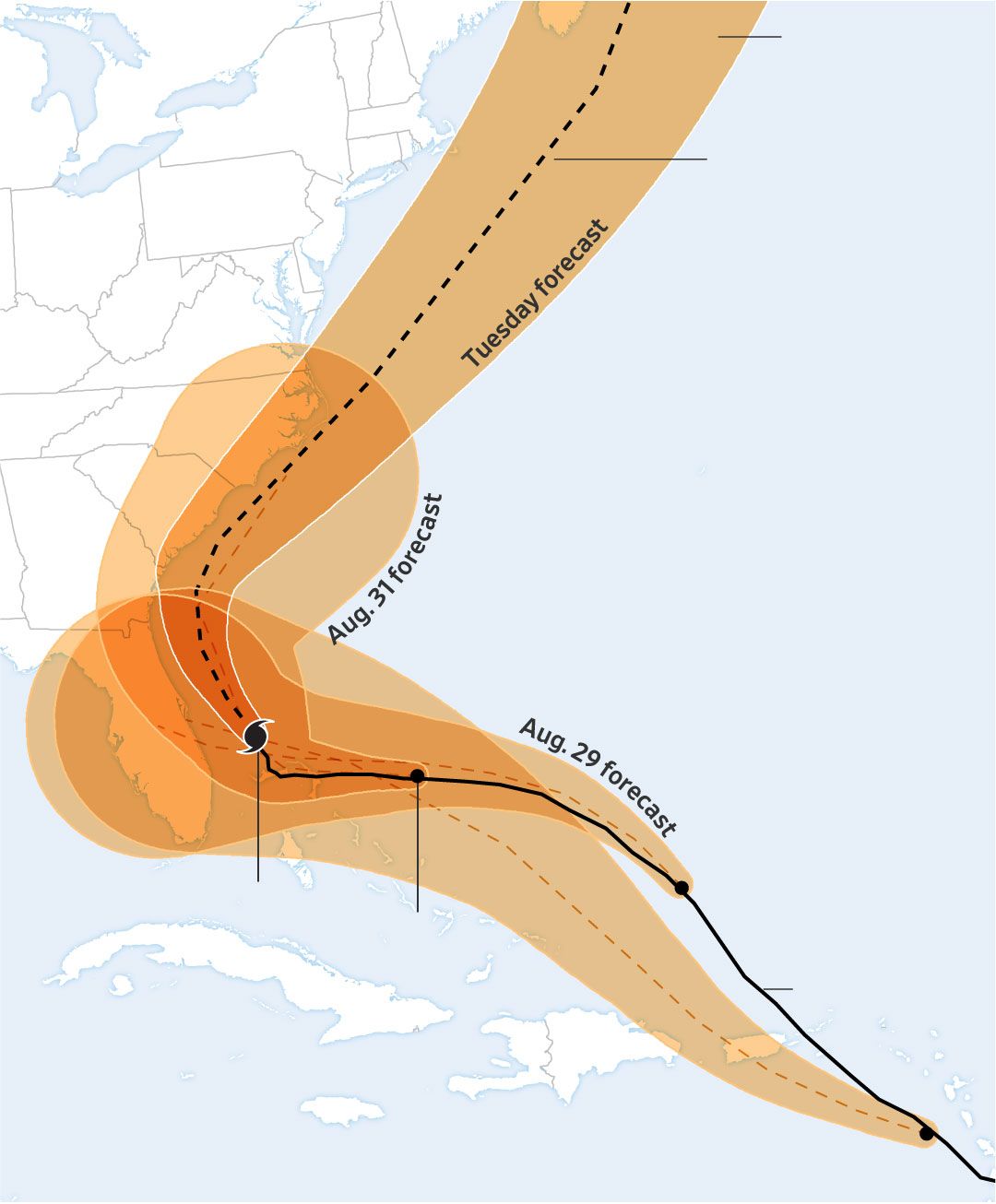 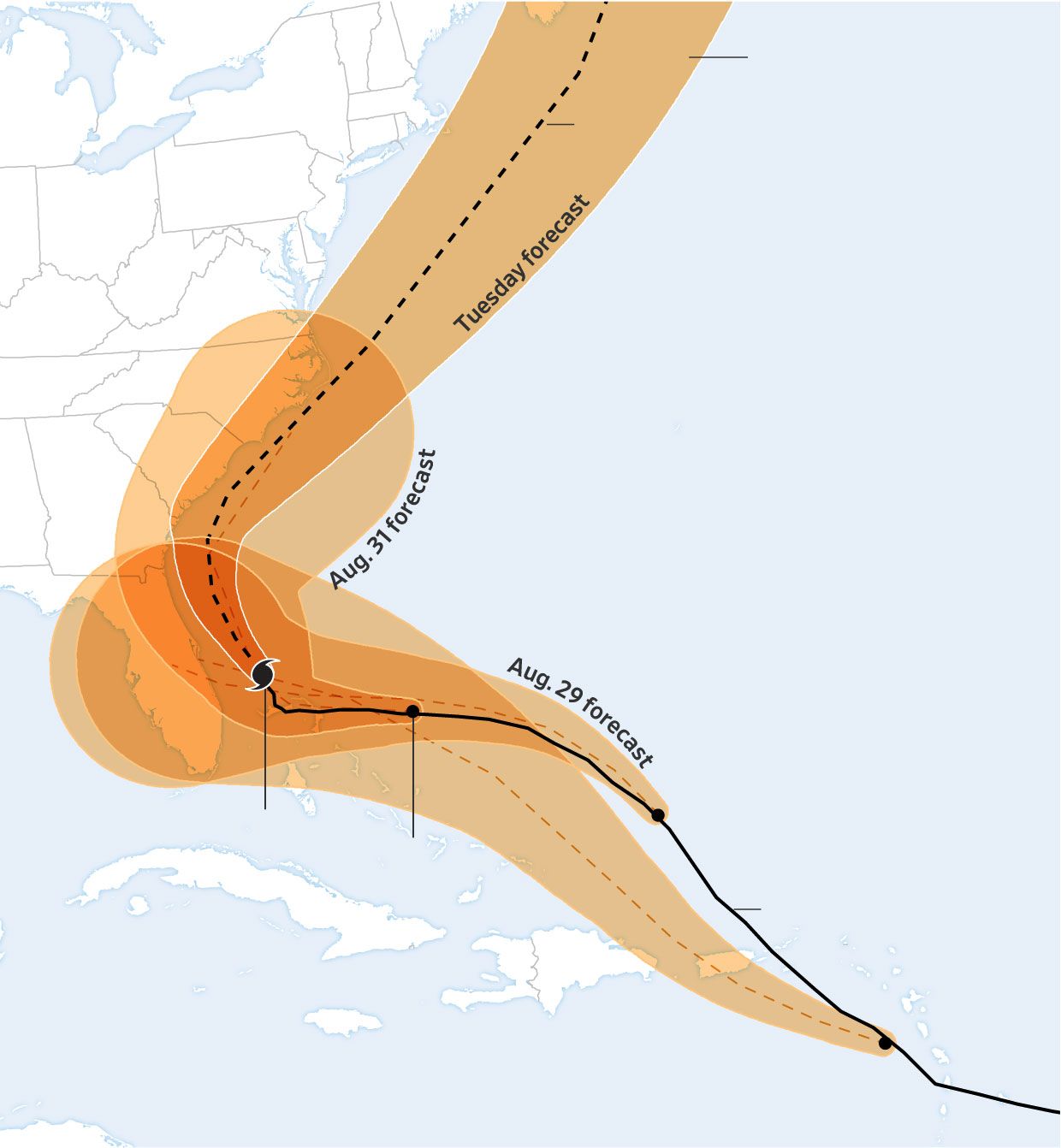 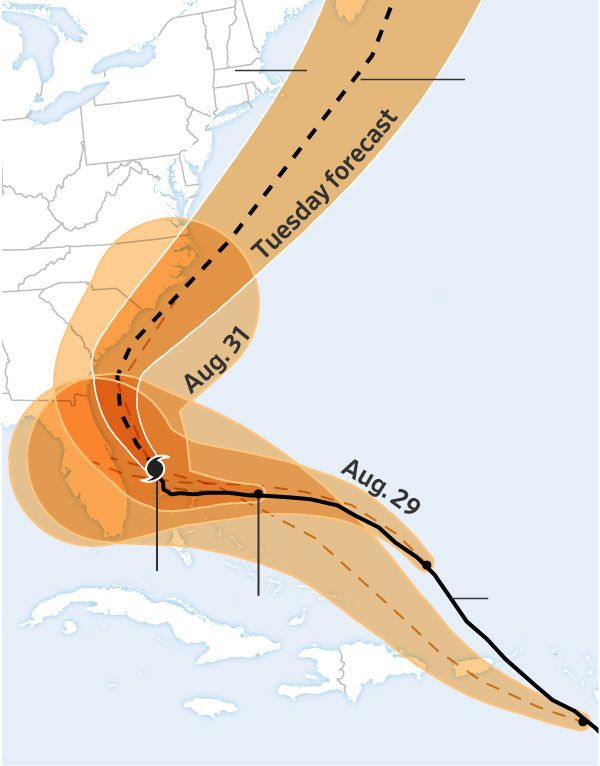 “We know that we cannot make everybody happy, but we believe that we can keep everyone alive,” Mr. McMaster said.

Dorian took a toll on U.S. industries while still miles away in the Atlantic. Seaports from Miami to Charleston, S.C., have closed or plan to, including Port of Charleston, S.C., one of the busiest ports on the East Coast. Meat giant Tyson Foods closed its Jacksonville, Fla. beef-processing plant Tuesday as a cautionary step, a company spokesman said.

Orlando International Airport closed through late Wednesday afternoon, while Fort Lauderdale-Hollywood was slated to reopen at noon Tuesday, according to the FAA. JetBlue and Spirit canceled a quarter of their scheduled flights Tuesday, with U.S. airlines scrubbing more than 1,400 services as the impact ripples through networks.

Authorities to the north were also closely tracking forecasts for Dorian. In Massachusetts, the state’s emergency management agency said Dorian could bring tropical storm conditions to Nantucket, Cape Cod and other coastal areas as early as Friday.

What would you do if you lived in central coastal Florida? Join the conversation below.