CHARLESTON, S.C.—Hurricane Dorian churned toward the Carolinas, regaining strength as a Category 3 storm and threatening large-scale flooding and powerful winds after demolishing parts of the Bahamas and sparing Florida.

The storm, which reached nearly 115 miles an hour after weakening earlier this week, was 80 miles south of Charleston and moving at 8 miles an hour, the National Hurricane Center said early Thursday. Hurricane-force winds extended 60 miles out from the storm center. Forecasters predicted life-threatening storm surge with coastal flooding along large sections of the Southeast and mid-Atlantic coasts in coming days.

In the Bahamas, the storm is responsible for at least 20 deaths, and officials expect the death toll to rise, Prime Minister Hubert Minnis said late Wednesday. “We know there are many Bahamians who are in need of help,” he said. “I want to assure you more help is on the way.”

North Carolina Gov. Roy Cooper said the state has experienced deadly hurricanes in the past, but he warned that complacency could be deadly. “Please don’t let familiarity get in the way of good judgment,” he said.

Extensive damage has been revealed in the aftermath of Hurricane Dorian on the Great Abaco island town of Marsh Harbour, Bahamas.

Extensive damage has been revealed in the aftermath of Hurricane Dorian on the Great Abaco island town of Marsh Harbour, Bahamas.

Mr. Cooper said Dorian continued to be a very dangerous storm, with the possibility of dumping heavy rain along the coast for well over 24 hours starting Thursday morning. Forecasters expect storm surge could raise water levels on the North Carolina coast by as much as 4 to 7 feet above normal tide.

Schools in North Carolina were canceled ahead of the storm as far inland as Raleigh, more than two hours’ drive from the coast. In Wilmington, businesses had placed sandbags by their doors and windows in expectation that the Cape Fear River would flood downtown streets, as it did during Hurricane Florence last year.

Virginia Gov. Ralph Northam also has declared an emergency in anticipation of the storm striking his state’s coast. The hurricane center on Wednesday issued tropical-storm and storm-surge warnings for parts of the state.

Georgia Gov. Brian Kemp told a news conference in Atlanta the storm’s slow movement was “unheard of” and prolonged its disruption of people’s lives, as governments worked to coordinate emergency responses, issue evacuation orders and manage roadways to and from the coast.

“I know that’s frustrating for our people,” he said. “They’ve been through way too much of this. But we’ve got to hunker down and chop some wood and get through one more.” 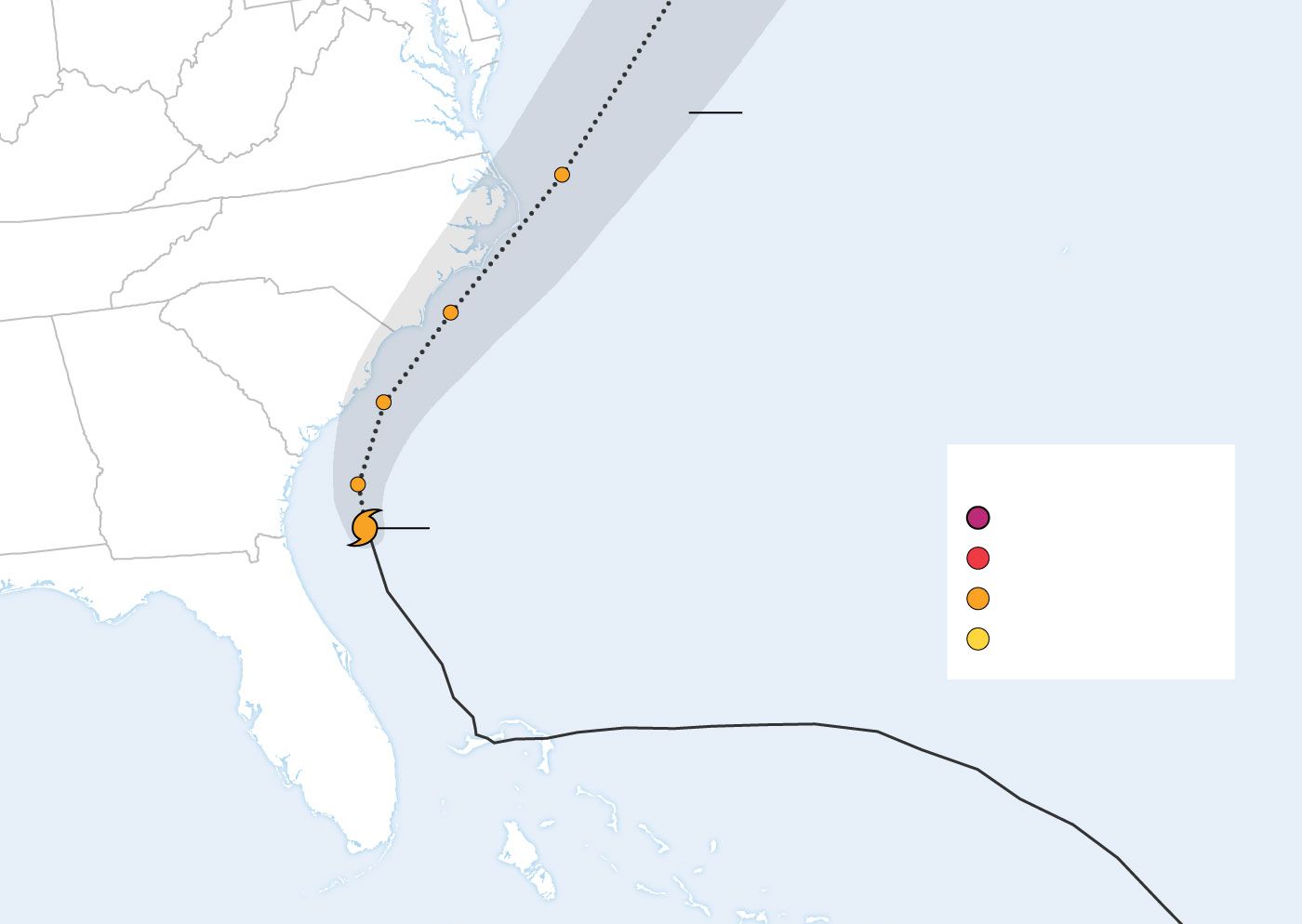 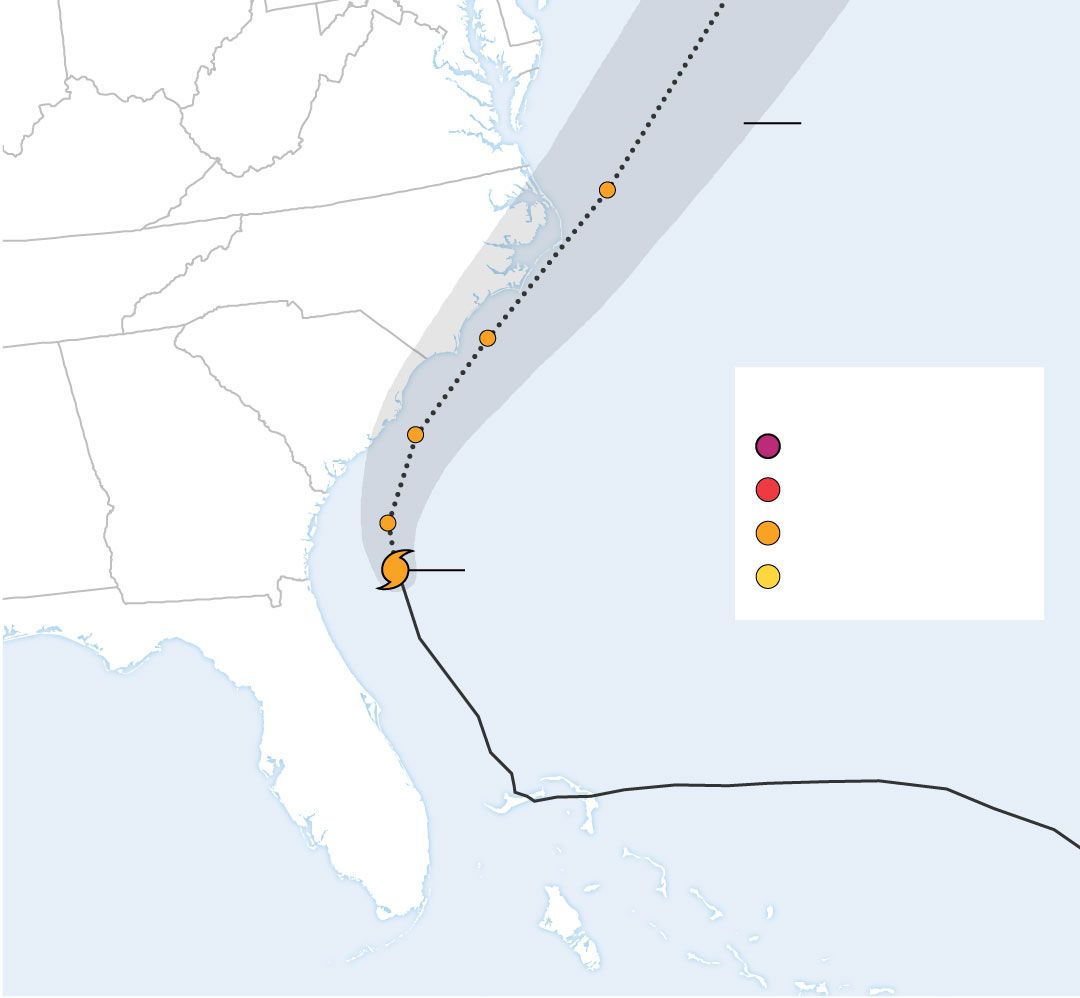 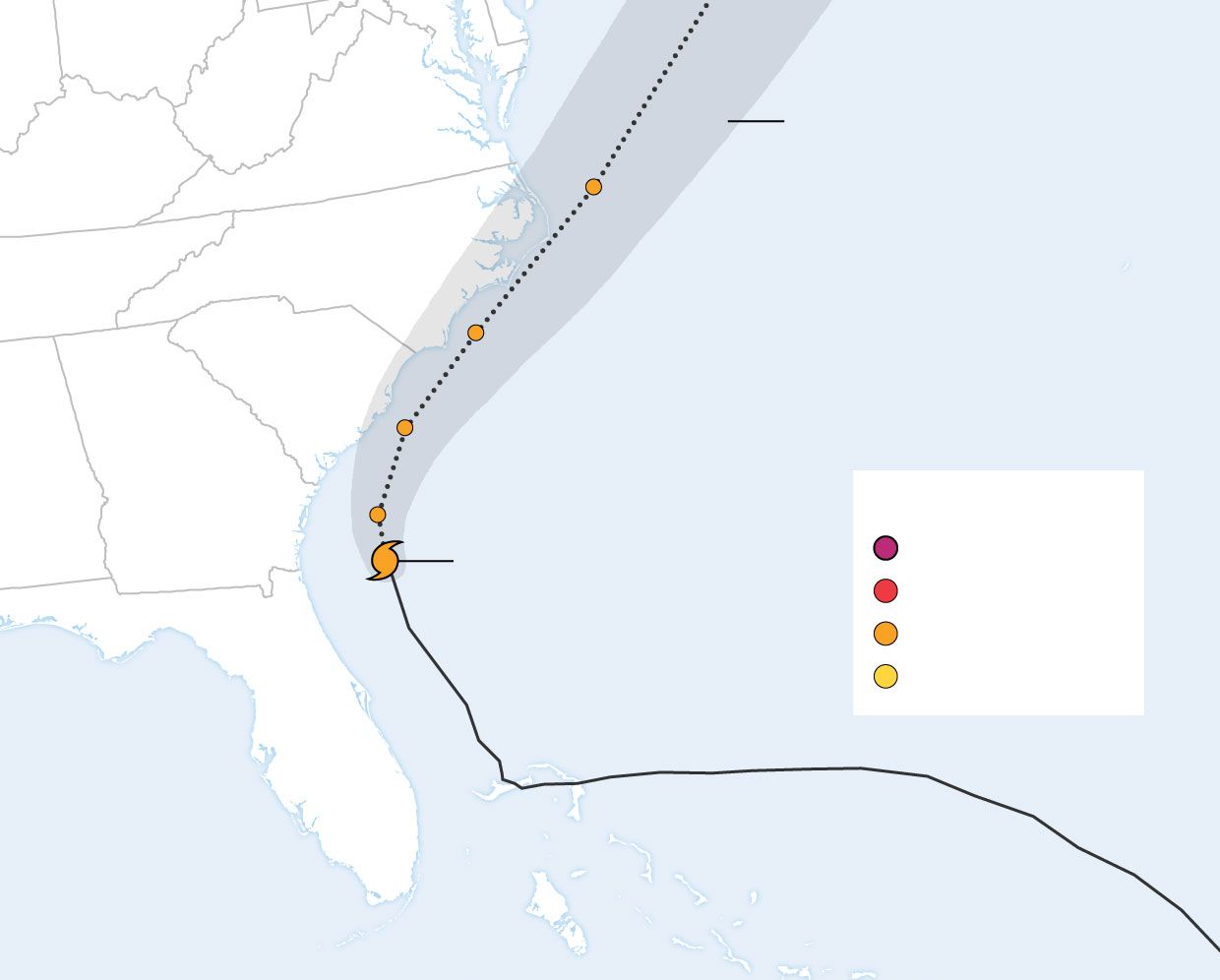 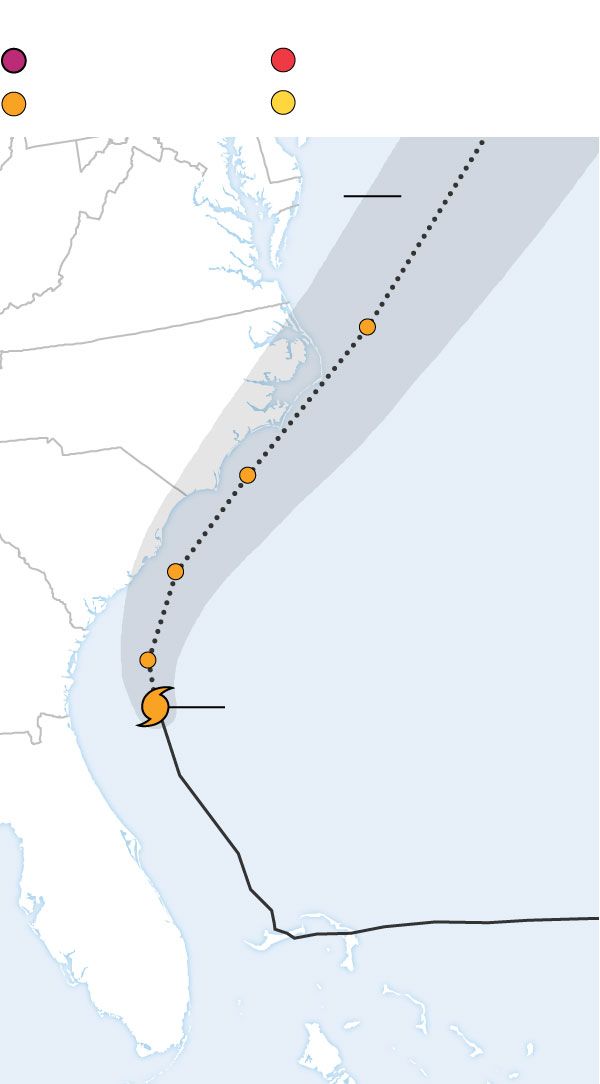 Florida was spared the brunt of the storm, leaving residents breathing a sigh of relief. By Wednesday afternoon, traffic had returned to streets, and supermarkets, shops and other businesses were reopening in the central, coastal part of the state.

“To say we dodged a bullet for the storm would be an understatement,” he said. “Obviously we dodged a missile.”

President Trump, who approved emergency declarations in Florida, Georgia and the Carolinas, expressed relief Wednesday that the storm didn’t batter Florida as feared. He cautioned that the Carolinas and other states were still threatened.

Amid criticism of his previous comments that Alabama could be hit by the hurricane, the president defended his remarks. Appearing before reporters Wednesday in the Oval Office, the president held up a previously published hurricane projection showing a path through Florida. It contained a black line extending the path into Alabama.

What should authorities be doing to ensure the safety of those in the path of Dorian? Join the conversation below.

Mr. Trump had tweeted on Sept. 1 that Alabama could be among the states that “will most likely be hit (much) harder than anticipated” by Dorian. Forecasters said that wasn’t true.

In the Bahamas, search-and-rescue operations continued, and relief efforts were getting started Wednesday. Trucks packed with diapers, toilet paper and other essentials rolled into the parking lot at the National Emergency Management Agency building in the capital, Nassau. Most of the supplies were designated for the Northern Abacos, which were devastated by Dorian.

The storm, which was Category 5 when it hit the Bahamas, affected about 76,000 people on the islands, according to the International Federation of Red Cross and Red Crescent Societies. In all, about 400,000 people live in the Bahamas.

The U.S. government’s foreign-aid agency began airlifting relief supplies from its Miami warehouse, a spokesman said, including plastic sheeting to provide shelter for at least 22,000 people.

U.S. Coast Guard rescue and aid operations have been active since earlier in the week, but nongovernment aid only began departing for Grand Bahama and the Abaco Islands on Tuesday and Wednesday morning.

Most aid groups remained in the capital Wednesday, some with stockpiles of supplies ready to go, some frustrated that they still hadn’t been able to reach the islands hardest hit by Hurricane Dorian. NEMA has said it wants to run an organized process that delivers the best possible assistance to the places that need it most.

“Some people have started on their own, but NEMA being a coordinating agency, we just want to make sure everything comes together instead of being so spread out,” said Lindsay Thompson, the agency’s spokeswoman.

—Valerie Bauerlein and Alex Leary contributed to this article.