Construction workers are seen next to heavy machinery while working on a new border wall in Santa Teresa, New Mexico, as seen from the Mexican side of the border in San Jeronimo, on the outskirts of Ciudad Juarez, Mexico April 23, 2018.

President Donald Trump’s move to divert $3.6 billion from military projects toward funding his border wall has added another obstacle for some of the Senate’s most endangered Republicans.

The administration on Wednesday outlined the areas from which it would pull money for the barrier. It will draw the most from two U.S. territories: $403 million and $257 million from Puerto Rico and Guam, respectively. Among states, New York, New Mexico, Alaska, Virginia and Washington will lose the most funding.

The administration will draw money from construction of hangars, training facilities, arms ranges and schools for children on bases, among other projects.

The White House plans to pull smaller chunks of funding from states such as Arizona, Colorado and North Carolina. And that could affect the fight for the Senate in 2020. GOP Sens. Martha McSally of Arizona, Cory Gardner of Colorado and Thom Tillis of North Carolina, already facing competitive reelection bids, will have to defend their votes not to stop Trump from diverting military funds.

The president, unable to get Congress to approve money for his signature campaign promise, declared a national emergency earlier this year to secure funding. The Democratic-held House and GOP-controlled Senate both voted to block Trump’s move, but could not find enough support to overcome the president’s veto. 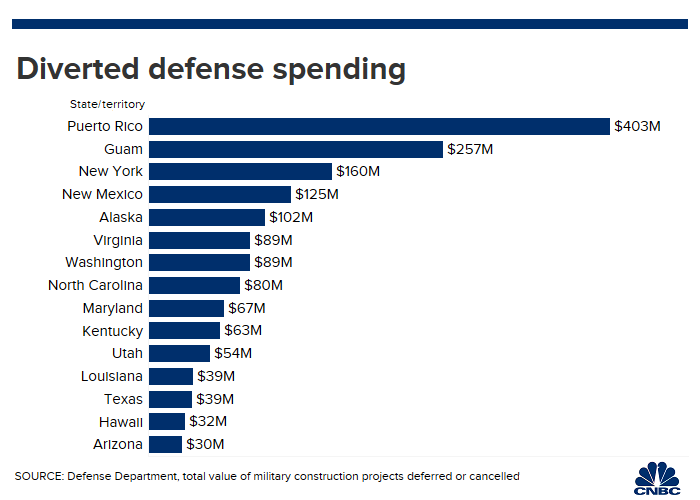 A dozen Senate Republicans — and only one in Maine’s Susan Collins who faces a competitive reelection — joined Democrats in opposing the emergency. McSally, Gardner and Tillis all backed the president’s declaration. So did Senate Majority Leader Mitch McConnell, R-Ky., and Sen. John Cornyn, R-Texas, two formidable 2020 candidates whose states will also lose millions from defense projects.

Election forecasters consider McSally and Gardner the most likely Republicans to lose their Senate seats next year as Democrats push to win the chamber. The GOP holds a 53-47 edge, meaning Democrats would have to flip three seats for a majority if they win the White House. They would have to gain four if Trump wins another term as the vice president can break a 50-50 tie.

“We need to secure our border and protect our military; we can and should do both,” McSally said.

Her likely Democratic opponent next year, former astronaut Mark Kelly, said Wednesday that “Fort Huachuca and our national security are suffering the consequences” of Trump’s effort to build the border wall. He tweeted that McSally “told Arizonans she had protected funding for military bases.”

Before the general election, McSally will have to fend off a primary challenger in businessman Daniel McCarthy.

In Colorado, a project at Peterson Air Force Base lost $8 million that will go to the border wall — a small sum compared with what the administration pulled from several other states. Still, it put Gardner on defense.

In a statement Wednesday, Colorado Democratic Party Chair Morgan Carroll said, “Coloradans don’t need to look beyond [the national emergency] vote to see that [Gardner is] just a spineless yes-man for Trump.”

On Thursday, Gardner blamed Democrats for the Trump administration pulling money from Colorado. He argued the state only lost funds because the party’s lawmakers would not approve Trump’s desired wall money.

“It’s unfortunate Democrats can’t defend the border and defend the country at the same time. If they could, we would have a border that was secure and no need for other funding to secure the border,” Gardner said in a statement.

Though Tillis faces a primary challenger and a potentially competitive general election next year, prognosticators generally consider him less vulnerable than McSally or Gardner. Still, he could face political backlash as the Trump administration will transfer a major chunk of change out of the state: $80 million from three sites. More than $32 million of the sum, funds to replace an elementary school at Fort Bragg, was previously canceled.

The Democrats running in the primary to challenge Tillis piled on the senator over the pulled funding. Former state Sen. Cal Cunningham argued Tillis “caved to partisan pressure in Washington and put his own self-serving politics ahead of what’s best for our security.”

Erica Smith, a Democratic North Carolina state senator, tweeted Thursday that bases “will be cheated out of” money. She asked Tillis to explain why the defense money “will now fund the president’s vanity project.”

In a statement Friday, Tillis spokesman Daniel Keylin said the senator has “delivered more than $1 billion in improvements to boost North Carolina’s military installations.” He noted that Tillis and other senators have “already worked on a bipartisan basis to backfill all the money of these projects to prevent any delays or impact.”

The Senate put money in its defense funding bill to replace the funding pulled for the border, but the House declined to do so.

Cancel reply
Heres where the jobs are — in one chart
Death toll rises from mysterious lung illnesses linked to vaping, prompting CDC to sound alarms