CELINA, Ohio—Signs posted around one of the country’s biggest man-made lakes read: “Danger: Avoid all contact with the water.”

When dangerously high levels of toxins from blue-green algae in Grand Lake were publicized in 2009, many residents and tourists stopped using the 13,000-acre lake in northwest Ohio. Hotel revenue and home values sank for several years as algae bloomed in the state’s largest inland lake.

Greenish water still laps at Grand Lake’s shores, but recent water samples show that the amount of algae-feeding nutrients entering the lake is down significantly. State, federal and private donations covered more than $10 million in projects aimed at improving water quality. More people are boating on the lake again. Grand Lake could now serve as an example for communities with algae problems across the nation, experts say.

Reconstructed wetlands are helping filter excess nutrients fueling algae blooms from the water at Ohio’s Grand Lake, where a decadelong project has worked to restore the local watershed. 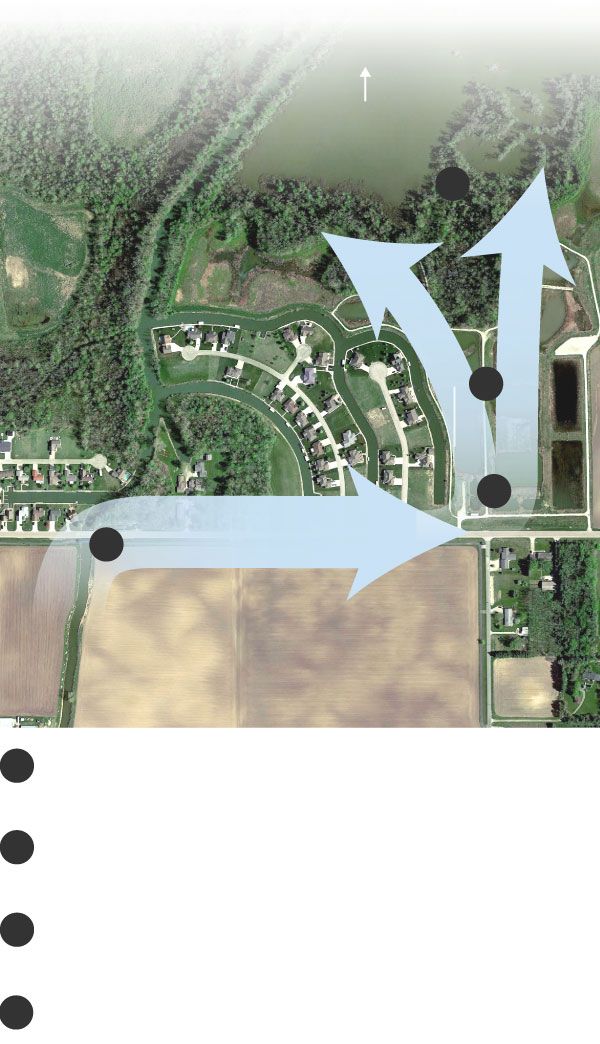 A pump diverts an average of one million gallons per day from Prairie Creek.

Several deep pools slow the water flow, allowing sediment and other particles to drop out.

Shallower pools, replete with vegetation, absorb more of the nutrients.

Algal blooms are on the rise, from Lake Erie to the Florida Everglades. In August, the Environmental Protection Agency listed algae-related beach closures or health advisories in 23 states, and it said other blooms may not have been reported. In 2010, the EPA found that 20% of 50,000 lakes surveyed had been affected by phosphorous and nitrogen pollution, which feeds algae. Last month, three dogs died after being poisoned by algal toxins in a North Carolina lake.

Cleaning up bodies of water choked with toxic algae has proved difficult. The project to repair Grand Lake, once one of the most polluted by algae in the nation, is one of the clearest successes. It shows cleanup is possible, but also expensive and time-consuming.

Residents here hope the warning signs will soon come down.

“It’s not restored yet, but it’s on the road to recovery,” said

an associate professor of biology at Wright State University-Lake Campus in Celina, who has monitored water quality in the lake for five years.

Beginning in 2012, wetlands areas were built around the lake, which was hand dug in the 1830s. The thick stands of bulrushes and other plants have reduced phosphorous and nitrogen levels in water entering the wetlands before reaching the lake by as much as 90%, Dr. Jacquemin said.

Three wetland areas, which cost a total of about $6 million to build, are constructed as a series of interconnected pools that allow particulates to settle out and plants and microbes to remove nutrients.

How can states ensure that their lakes and other bodies of water are safe to the public at large? Join the conversation below.

“It’s the only sustainable solution, to take some land out of farming,” said Dr. Bill Mitsch, a professor of ecological engineering at Florida Gulf Coast University.

Ohio has instituted rules for area farmers aimed at lowering nutrient runoff from fields. The state’s Department of Natural Resources has also dredged the lake bottom to remove nutrient-loaded sediment, and tried to clean up one of Grand Lake’s beaches near St. Marys by building a rock jetty and installing aerators and a curtain to filter water. Recent water tests there showed levels below 6 parts per billion of the toxin microcystin, under Ohio’s threshold of 20 parts per billion for avoiding contact with water.

Donna Grube, executive director of the Greater Grand Lake Region Visitors Center, said a 22% drop in lodging taxes in the area between 2008 and 2010 can be blamed on the algae issue. More recently, tourism has rebounded, as have home values, she said.

Ms. Grube said she hopes the warning signs at the St. Marys beach will be removed by next spring. “Local people feel we’ve gotten a bad break,” she said. “Most of us love this lake.”

Despite the posted warnings, many boaters head to a shallow area known as “Boater Beach” on weekends and wade in the water while a band plays on a pontoon boat. Others tow children in inner tubes, ride jet skis and let their pets swim.

“That tells me the lake is coming back and people trust it,” said Rich Jones, a fabrication technician at a pipe manufacturer who lives in Celina. He said he never stopped swimming and boating at the lake with his children and four golden retrievers.

Roger Lowry, who lives in St. Marys, isn’t taking any chances. He drove to the lake in a golf cart on a recent weekday when a single motorboat could be seen in the distance. The retired grocery store owner kept his dog Moe leashed to the cart. “I wouldn’t let my pet swim in there,” he said. “I remember when it was nice, and that’s the sad part.”

Patrick McGowan, mayor of St. Marys, called the lake’s cleanup a success, but said he wants more dredging and a new canal to remove deposits of nutrients, and another wetland built—work he estimates would cost an additional $12 million to $15 million.

“This is our legacy for future generations,” he said.

Write to Kris Maher at kris.maher@wsj.com