WASHINGTON—The Federal Reserve voted to cut interest rates by a quarter-percentage point for the second time in as many months to cushion the economy against a global slowdown amplified by the U.S.-China trade conflict.

While the central bankers left the door open to additional cuts, they were split over Wednesday’s decision and the outlook for further reductions.

Seven of 10 officials voted in favor lowering the short-term benchmark to a range between 1.75% and 2%. As in July, two reserve bank presidents dissented from the decision in favor of holding rates steady. This time, Fed Chairman

faced a third dissent from a bank president who preferred a larger, half-point cut.

“We took this step to keep the economy strong,” said Mr. Powell in a news conference after the decision.

He also indicated rates could be cut further if the economy weakened further, even though he said officials still have a positive outlook for the U.S. economy.

The policy statement released after the meeting was little changed from July, when officials held the door open to future rate cuts. As the rate-setting committee “contemplates the future path” of its policy rate, “it will continue to monitor the implications of incoming information for the economic outlook and will act as appropriate to sustain the expansion,” the statement said, repeating language from July.

The Federal Reserve has joined other central banks in cutting rates in 2019.

Rates that did not change

The statement noted household spending had been rising at a strong pace while business investment and exports had weakened.

Projections released after Wednesday’s two-day meeting showed the extent of the split over the policy outlook, complicating the challenge facing Mr. Powell.

Seven of 17 officials penciled in one more rate cut this year. The other 10 were split evenly between those who thought the new level of rates, after Wednesday’s cut, would be appropriate and those who thought rates shouldn’t have to go any lower.

The Fed’s forecasts of the federal-funds rate for the end of 2019 have changed over time. Circles below are sized according to the number of officials who set their projections to the corresponding rate for each release. 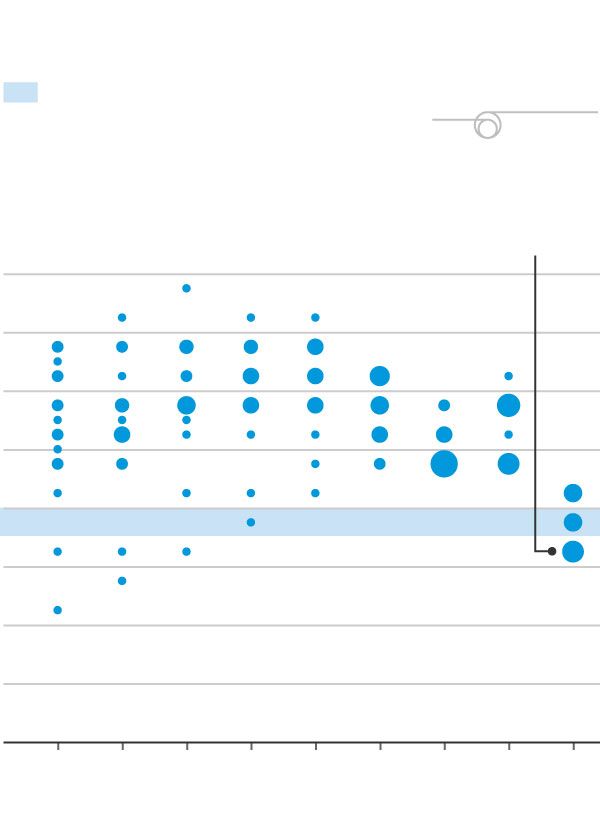 Projected midpoint for rate at end of 2019

Those divides are even sharper in projections for next year. Roughly half of officials projected rates by December 2020 would sit one-quarter point below the new level, while another half thought it would be appropriate to reverse at least one of the two recent cuts.

The Fed faces an unusual challenge setting policy given the volatile outlook for the global trading environment, that has chilled business investment. “There is a piece of this that we really can’t address,” said Mr. Powell. “It’s an unusual situation… It’s a challenging time, I admit it.”

Officials expected the U.S. economy to slow this year, but increased uncertainty means officials aren’t sure if the economy is going to cool a little bit or a lot.

U.S. economic data paint a mixed picture. Consumer spending has been solid, but manufacturing has weakened. Recent revisions to employment and profit growth show that the economy over the past year wasn’t as strong as previously thought.

Do you agree with the Fed’s rate cut, and what do you think it signals about the U.S. economy? Join the conversation below.

Some Fed officials have warned that waiting for signs of consumer spending and hiring to slow more sharply could require the Fed to deliver more aggressive stimulus at a time when its policy rate is already historically low.

Hiring has slowed this year. The private sector added 129,000 jobs on average over the three months ended August, down from 236,000 for the three-month period ended December.

One challenge for the Fed in reading these numbers is that for years, officials have expected hiring to slow as the economic expansion matures. At the same time, wage growth hasn’t accelerated substantially this year, as would occur when the demand for workers outstrips supply.

Meantime, the Fed has come under growing pressure from President Trump to aggressively cut interest rates—to boost stock markets and weaken the U.S. dollar—after the White House’s trade talks with China hit an impasse this spring. Mr. Trump had called for the Fed to cut rates by a half-point in April, but he has since said the Fed should lower rates more aggressively.

Soon after the Fed announced its rate cut, Mr. Trump lashed out at Mr. Powell on Twitter. “Jay Powell and the Federal Reserve Fail Again,” he wrote, one of 30 such statements about Fed policy since the July meeting. “No ‘guts,’ no sense, no vision! A terrible communicator!”

Mr. Powell has said the Fed doesn’t make policy decisions based on demands from political leaders and instead focuses on its congressional mandate to boost employment while keeping inflation stable. The unemployment rate, at 3.7%, is near a half-century low, while inflation, excluding volatile food and energy categories, has been running around 1.6%, according to the Fed’s preferred gauge, below its 2% target.

Separately, the Fed announced steps designed to boost liquidity in short-term funding markets after the central bank was twice forced this week to inject cash into money markets to pull down interest rates.

The Fed’s benchmark rate rose to 2.3% on Tuesday, trading outside of its range of 2% to 2.25%, after technical factors and monetary and regulatory changes created shortages of funds for banks.

At the two-day meeting, the Fed’s rate-setting committee lowered a separate interest rate paid to banks on deposits, known as reserves, held at the Fed, which could reduce banks’ demand for that cash and increase their lending in other money markets. The committee cut that rate and another borrowing rate by 0.3 percentage point, larger than the 0.25 percentage-point reduction in the fed-funds target.

Write to Nick Timiraos at nick.timiraos@wsj.com