On Monday, oil futures jumped the most ever. On Tuesday, the Federal Reserve lost control of overnight interest rates and made emergency cash injections for the first time since the financial crisis. Unnerving things come in threes: The biggest swing out of stocks with momentum and into value since the financial crash happened the week before.

Yet, stocks, bonds and the dollar are having a perfectly normal couple of weeks. The S&P 500 is less than 1% below July’s high. Are investors resilient enough to recognize these as unconnected events each with its own explanation? Or is everyone so somnolent that they’re ignoring troubles deep in the system?

Keep Calm and Carry On

Stocks made a new peak even after bad news mounted in 2007. 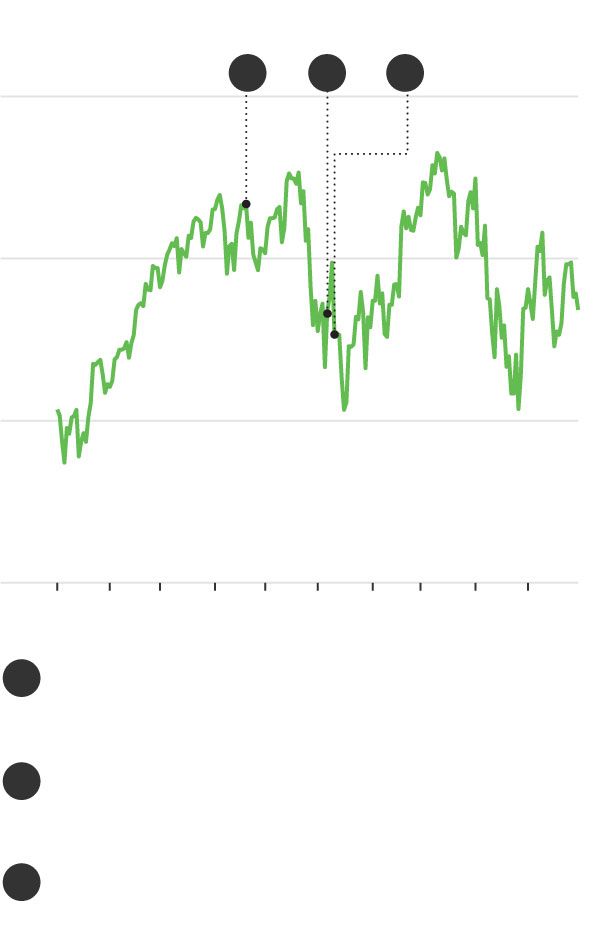 I lived through 2007, and watched aghast as investors ignored three sets of problems that eventually brought down the financial system. The subprime blowup, followed by the freezing of money markets and the crash in quantitative hedge funds, did lead to a 10% summer correction in the S&P, but stocks made it all back and only woke up to reality months later, peaking in October.

Problems in the financial system can quickly gum up the workings of the real economy. If big overleveraged funds or brokers fail because of bad bets on oil or momentum stocks it could matter a lot.

My inclination, however, is to think that this time the market and economy are showing their strength, not ignoring risks. The financial system is rolling with the punches. Each event has its own explanation, and there’s no sign of damage spreading.

One thing to look for is whether the specific reasons for each problem are in some way connected. Back in 2007, it was mostly about too much debt, everywhere. The subprime collapse spilled over into money-market funds that had bought securitized mortgage paper. That hit banks reliant on money markets for finance, leading to the first run on a British bank in more than a century.

The problems this time are more amenable to understanding in their own right. The sudden, historic rotation last week from growth stocks into value stocks is easily explained as investors having become far too cautious, abandoning cheap, cyclical stocks. When things turned out not to be quite as bad as feared, the trade reversed, along with bond yields; once it started to turn, it went very fast.

The oil move made sense. Few were prepared for a single attack on a Saudi Arabian installation to take out 5% of the world’s oil supplies, so the effect on the oil price was dramatic. There were few ripples on other markets, though, because even after the huge one-day jump, oil was still below where it stood in May, and long-term damage is mitigated by the promise of rapid repairs.

The danger of these types of huge moves is that hedge funds and other leveraged traders get blown up, hitting their lenders and clients. But financial leverage is much lower than it used to be. And—so far at least—no serious problems have emerged. Let’s hope they don’t.

More troubling is the disruption in overnight money markets. Dislocations there can quickly crush businesses reliant on overnight funding. In 2007, this took out banks and banklike lenders.

The detailed explanation here can be read as reassuring or deeply worrying.

In one sense the problem is too much regulation, rather than too little. In the past, U.S. banks would simply expand their balance sheets to ease any pressure in the overnight secured lending, or repo, markets. They would offer cash loans against the safety of Treasurys and make nearly risk-free profits along the way.

But impending quarterly tests of both liquidity and size encourage the big banks not to expand too much ahead of the deadline. Meanwhile, they are absorbing a flood of Treasurys issued to finance the government’s near-$1 trillion deficit. The seasonal demand for cash to pay tax bills pushed the system to the limit.

It is reassuring that the problem isn’t that the banks are wildly overleveraged or reliant on dodgy off-balance-sheet funding vehicles, as they were in 2007. It is also reassuring that the markets are now functioning again, and there is unlikely to be much direct impact even on the unlucky few who borrowed at the peak 10% annualized rate reported on Tuesday. That amounts to less than 0.03% for one day.

While taking comfort that things haven’t spread, I have niggling doubts. It’s concerning that the financial system’s plumbing can be blocked by such unexceptional events; perhaps the system is more leveraged than it appears, or the Fed has tightened too much.

It is also worrisome that the Fed was unprepared, and botched its initial attempt to calm the market. If liquidity can vanish so quickly from the market at the base of almost all borrowing, it’s reasonable to worry that other markets could dry up, too.

But unless a new connection between these various events emerges, or a bunch of leveraged funds blow up, it seems reasonable for investors to take them in their stride.

Why do you think bonds and the dollar have remained stable amid a tumultuous market? Join the conversation below.

Write to James Mackintosh at James.Mackintosh@wsj.com

How We Should Bust an Investing Myth
U.S. Voters Support Expanding Medicare but Not Eliminating Private Health Insurance