On July 11, the 18-year-old arrived at Dr. Schreiber’s office, struggling through quick, shallow breaths. Within 10 minutes, emergency medical services were called, and the girl was wheeled to the intensive-care unit at Children’s Hospital of Wisconsin in Milwaukee. She was fighting for her life.

The patient was the sixth the hospital had seen since June who had arrived gasping for breath, with chest pain and fatigue but without any sign of infection. Puzzled by the earlier cases, the hospital had been scouring their medical histories trying to figure out what might be going on. The common denominator, it turned out, was vaping.

The notice started a chain of events that prompted doctors, nurses and health authorities to recognize they had hundreds of similar patients. Once authorities began to issue warnings about a new lung illness, doctors saw its shadow everywhere. In Illinois, a doctor who saw the warning from Wisconsin health authorities reached out for help. Likewise, a doctor at a Utah hospital system, told by a colleague about the alerts, notified her state’s health agency about patients.

Health authorities now count 530 confirmed and probable cases of the vaping-related illness across 38 states and one U.S. territory. Eight people have died, the authorities say, the latest in Missouri.

The Centers for Disease Control and Prevention and the Food and Drug Administration are probing what causes the illness and which chemicals and devices were used by patients. The FDA is conducting a criminal probe. The CDC, along with doctors and state and local health officials, have urged vapers to stop, or at least stay away from vaporizers, cartridges and liquids sold on the street.

Health authorities and physicians suspect the illness is an inflammation or injury caused by a chemical exposure to the lungs. Though all patients described a recent history of e-cigarette use, investigators still don’t know the specific cause of the vaping-associated pulmonary injury, sometimes called VAPI, or why a slew of cases have appeared over the past several months.

Most of the victims were vaping a marijuana ingredient called THC, while some were vaping only nicotine products.

“Once you see the connection, you can’t unsee it,” said

a pulmonologist at Penn Medicine. “The assumptions that would have guided care a month ago no longer do.”

The vaping-related cases looked like pneumonia in some ways but not in all aspects. Doctors found a range of symptoms.

Share of 53 patients in Wisconsin and Illinois with initial symptoms

Patients suffer from shortness of breath, coughing and chest pain, and some also experience gastrointestinal issues, fever and weight loss. Most chest X-rays or CT scans show hazy, white opaque areas in the lungs, but there’s typically no infection. Almost all patients are hospitalized, and many require help breathing.

The 18-year-old seen by Dr. Schreiber, the girl’s longtime doctor at Bluemound Pediatrics in Brookfield, Wis., had first sought help on July 7. The girl, a recent high-school graduate who ran track, had checked into an urgent-care clinic on that Sunday with trouble breathing. An X-ray showed abnormalities in her lungs. The clinic issued a common diagnosis, pneumonia, and sent her home with a prescription for antibiotics.

For years, public-health authorities and doctors had vaping on their radar. Researchers found ingredients in vaping products that could damage lungs, such as heavy metals and potentially toxic organic compounds. Yet because the products were relatively new and unregulated, their health effects were, and still are, mostly unknown. And when patients showed up with halting breaths and chest pain, doctors and nurses commonly diagnosed pneumonia, a condition they saw often.

Scattered around the country, however, some doctors began suspecting e-cigarettes. Last year, medical journals published pieces written by doctors from Massachusetts, Ohio and Pennsylvania linking e-cigarette use to reports of lung illnesses dating back as far as 2012.

The papers didn’t receive broad attention, as is typical with single case reports, especially since VAPI’s symptoms are relatively common.

a pulmonologist at the University of Pittsburgh Medical Center East. “Until late summer, this wasn’t an entity that was on our radar.”

For the 18-year-old girl in Wisconsin, the standard treatment didn’t help. Four days after leaving urgent care with antibiotics, the girl returned to Bluemound, faring worse. The girl had trouble just walking from the waiting room, Dr. Schreiber said. She put the girl on oxygen, and gave her breathing medicines and ibuprofen to lower her fever.

“As we gave her oxygen, she started to get sleepy, and that’s a concerning thing,” Dr. Schreiber said in an interview. Often respiratory patients “breathe really fast, until all of a sudden they stop breathing.”

Ninety minutes after checking into Dr. Schreiber’s office, the teenager was in Children’s Hospital’s intensive-care unit, breathing through an oxygen mask.

The next day, Dr. Schreiber called the ICU to see how the girl was doing. A nurse said the patient was one in a string of similar cases that had come in recent weeks, Dr. Schreiber said. The nurse also said each of the cases appeared linked to vaping.

“I didn’t even think of that,” Dr. Schreiber said. “I just thought it was an infection that was not being treated appropriately.”

Children’s Hospital had another patient with a pneumonia-like lung illness on June 11, when a 17-year-old was admitted with shortness of breath, low oxygen in his blood and weight loss. Doctors thought it might be an infectious pneumonia, but lab tests came back negative.

Doctors gave the boy steroids, a common treatment for inflammation, and discharged him thinking the case was somewhat odd, said

the medical director of the pediatric intensive-care unit at the hospital.

Two weeks later, on June 28, another patient with similar symptoms arrived at the hospital. On Fourth of July weekend, three more patients came.

Doctors began scouring medical records and patient histories, looking for a common thread to explain the unusual goings-on. They searched for atypical infections from fungus, foreign travel, skin, joint or potential muscle conditions. In the end, the only thing the patients had in common was a history of vaping.

The plight of the 18-year-old girl seen by Dr. Schreiber was instrumental in the decision to alert the public, said

the chief medical officer at the hospital. Doctors didn’t want any more patients to receive the wrong treatment and have their conditions worsen.

Has the health scare encouraged you to quit vaping? Join the discussion below.

Hospital staff held the July 25 press conference warning the public about the illness. Wisconsin’s health department alerted doctors and local health agencies across the state, asking them to look for and report any similar cases.

A physician in Illinois saw the memo and contacted Wisconsin’s health department, seeking advice about a patient that seemed to fit the profile. On Aug. 1, Wisconsin and Illinois launched a joint investigation, and the CDC was notified.

a pulmonologist at Intermountain Healthcare hospital system in Utah who advises ICUs around the state remotely, helped treat two patients at separate hospitals who suffered from the same pneumonia-like symptoms but didn’t have an infection.

Both patients had vaped, Dr. Harris said in an interview. Dr. Harris mentioned one of the cases to a colleague,

and showed him a CT scan. Dr. Leung said he had seen the alert from the Wisconsin and Illinois health departments and sent the links to Dr. Harris.

The next morning, Dr. Harris called the Utah Department of Health, whose medical director wasn’t aware of the lung injuries but expressed concern, Dr. Harris said.

During her next shift, 36 hours later, Dr. Harris helped treat two more patients. She called the medical director back, and Utah’s health department launched its own investigation, according to Dr. Harris.

“I don’t see kids landing in the ICU, super sick, lungs whited-out very often. And to see four of them at once, I’d say something is happening,” Dr. Harris said.

Doctors around the country—Texas, Minnesota, Pennsylvania—started calling Children’s Hospital. The Wisconsin and Illinois state health departments worked with the CDC to create a profile of the condition to help health officials identify cases.

The CDC, which started speaking out about the illness in mid-August, began urging people to stay away from products by early September. It described a group of cases in North Carolina, and the New England Journal of Medicine published reports on patients in Wisconsin, Illinois and Utah.

Doctors started reviewing past cases. Dr. Fitzpatrick, at the University of Pittsburgh Medical Center, said she noticed two of her recent patients had severe respiratory illnesses that had never been linked to any cause. She called the patients, who said they had a recent history of vaping.

Share of the reported vaping products used by 41 patients in Wisconsin and Illinois in the previous 90 days. 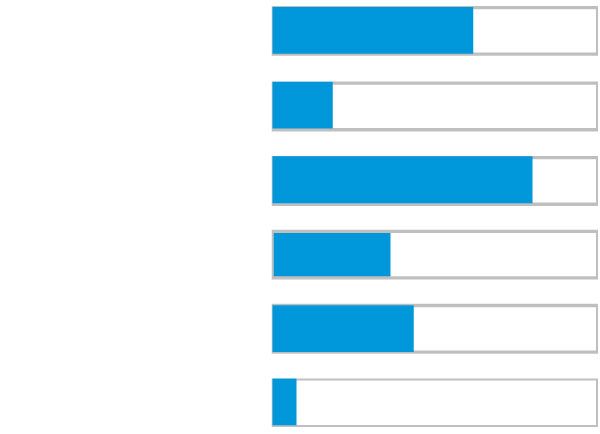 “I didn’t know vaping was it at all,” said one of Dr. Fitzpatrick’s patients, a 29-year-old who asked not to be named because he bought illicit vaping products and doesn’t want his employer to know.

The man said he was hospitalized for 17 days in June after vaping products containing THC. He breathed through a ventilator and was connected to a machine that pumps blood outside of the body to give the heart and lungs a rest and increase oxygen in the blood.

Recovered, he said he is back at work and has stopped vaping for the time being.

Doctors and nurses are now looking out for VAPI. They ask suspected patients if they vape, how often and what products they used. Often, they treat the patients with steroids, which seem to help quell the inflammation, doctors and health officials say.

The specific cause remains a mystery. Investigators suspect a new chemical or additive might have been recently introduced to vaping products that could be responsible, or exposure to a combination of different chemicals may play a role.

THC, the chemical in marijuana known for its psychoactive effects, has been associated with most of the cases, but not all. Some patients report only vaping nicotine-containing products.

On Sept. 11, the Trump administration said it planned to ban most flavored e-cigarette products, and several states are taking or considering similar action. California Gov. Gavin Newsom also signed an executive order that directs state agencies to crack down on illegal or counterfeit vaping products. Walmart Inc. said on Friday that it would stop selling all e-cigarettes in its U.S. stores, citing regulatory uncertainty.

The Office of Criminal Investigations at the FDA is also investigating the illness, federal officials recently disclosed. The OCI is focusing on the product supply chain and figuring out what is making people sick, not investigating individuals for purchasing illicit products, said

the director of the FDA’s Center for Tobacco Products.

Dr. Schreiber’s teenage patient was released after eight days. It’s unknown if she or other patients will have any long-term effects from the illness. The last time Dr. Schreiber spoke to her, she was in the car with her mother, recovered and on her way to college. Dr. Schreiber said the girl has stopped vaping and tried to persuade friends to also quit, but with mixed success.