BUENOS AIRES—It was a familiar scene for Argentines. As a financial crisis engulfing the country entered its fourth week in early September, residents were lining up at banks to withdraw dollars from their accounts, hoping to keep their savings safe.

They had yanked close to $6 billion when President

After jetliners carrying the greenbacks from Miami and New York touched down, armored trucks raced the money to the Argentine mint. The dollars were distributed to banks, which extended hours so panicky clients could access their money.

“It was a logistical challenge,” the official said, “to ensure there was enough cash at all branches so people would calm down, and avoid rumors, tweets or social media postings saying there was a shortage of dollars.”

Nearly four years after Mr. Macri took power, Argentina is repeating a pattern that has dogged Latin America’s third-biggest economy for over 70 years. It is running out of hard currency while grappling with high inflation and economic contraction. Again.

The country of 44 million is heading toward possible default on about $115 billion on foreign-currency bonds just 18 years after its last major crisis, when it defaulted on $100 billion. It owes at least $44 billion more to the International Monetary Fund, which it will try to restructure.

The country has received close to 30 IMF aid packages over the past 60 years, most with strict austerity conditions that it has often breached. Argentina has reneged on debt at least eight times in more than 200 years.

“Argentina seems trapped by its own history,” said

an Argentine economist who helped renegotiate its foreign debt in the early 1990s.

What economists consider perpetual mismanagement has inspired dubious titles. Argentina is the world’s most volatile large emerging market and its economy has clocked the highest inflation levels in recent history, a median of 220% annually since 1980, according to estimates from the Institute of International Finance, a Washington-based association of financial institutions. Argentina’s central bank has had 61 presidents, only one of whom completed a term—back in the 1940s.

The underlying problem is a country living beyond its means. The government routinely spends more than it makes through taxes and other income. In nearly every year since 1950—except for a few in the early 2000s when soy-export prices took off—Argentina has run a big fiscal deficit. Under the conservative Mr. Macri, this has averaged about 5% of annual economic output.

(The U.S. government had a deficit of 3.9% of gross domestic product last year, expected to widen to 4.5% this year, according to the Congressional Budget Office. But there is solid demand for U.S. government debt and the U.S. can print dollars, the global reserve currency.)

To make up the difference, Argentina often prints money that fuels inflation or borrows dollars from abroad, or both. Because it is a protectionist economy closed to free trade and riddled with inefficient companies, it struggles to generate enough dollars through exports to pay its dollar debts. Eventually, creditors demand higher interest rates, debt payments grow unsustainable and the whole thing crashes.

During good years, Mr. Stefanuto, 65, fills his northern Buenos Aires warehouse with boxes of motorcycle parts from India and China. “The inventory allows you to absorb all of these hits from inflation so you don’t disappear from the market,” said Mr. Stefanuto, who tries to have inventory covering at least six months’ production.

He plots for a sales collapse by having space to store bikes until a recovery. Some 1,200 bikes are stored at his factory, four times as many as in 2017. “The earnings from the company go to inventory,” he said. “They aren’t invested in anything else.”

People like Jorge Lemos have learned to be wary. When trouble hit this month, the Buenos Aires retailer lined up at his bank when it opened. “I took out all the money I had in my dollar savings account and left it in the same bank, but in a safe-deposit box,” he said, “because I don’t trust this government.”

Residents use the beleaguered peso for basic transactions but turn to U.S. dollars for savings, to set real-estate prices or to conduct property transactions—sometimes with briefcases full of dollars. Argentines have $70 billion to $150 billion stashed under mattresses or in safe boxes, economists estimate. They have some $500 billion in assets abroad, said Orlando Ferreres, a consultant and former deputy finance minister.

“The demand for pesos is very low due to a credibility problem,” said

a former central bank governor. He was ousted eight months before completing his term in 2010 by the then-president,

The two were at loggerheads over her plans to use dollar reserves to pay down government debt. She sent federal police to the bank to prevent him from getting in his office.

Even saving in dollars often isn’t enough, which is why Argentines such as Mr. Lemos have withdrawn their greenbacks in recent weeks. During the 2001 crisis, the government seized bank accounts, giving savers government bonds or turning their dollar deposits into pesos. The economy shrank almost 11%, poverty soared, businesses were ransacked and then-President Fernando de la Rúa fled the presidential palace by helicopter.

The current crisis may be less dramatic but could be long-lasting, economists warn. Argentina’s economy rebounded in the early 2000s with soaring commodity-export prices, thanks to China’s rise. Few experts nowadays expect such short-term relief.

The currency controls restrict companies and farmers from sending dollar earnings abroad, while allowing ordinary Argentines to withdraw or transfer abroad up to $10,000 a month.

“There is a difficult road ahead,” said

an Argentine economist and former Western Hemisphere director at the International Monetary Fund.

Mr. Macri’s office directed questions to the Finance Ministry, which didn’t respond to requests for comment. The government has said currency controls and other recent measures were necessary to contain the financial market volatility.

The latest trouble began mid-August, when Mr. Macri lost a primary vote to the opposition Peronists by a big margin. The vote indicated the Peronists are all but certain to win an Oct. 27 presidential election and sparked a selloff in local equity and currency markets amid a deepening recession with interest rates hovering around 70%.

Peronist candidate Alberto Fernández and his running mate, Mrs. Kirchner, have pledged to dismantle Mr. Macri’s market reforms and his unpopular austerity measures. “The political world and the economic world don’t trust them, and what they want to do with Argentina again,” Mr. Macri said as markets reeled the day after his August loss in the primary. He later apologized for those comments.

Mr. Fernández in an interview at his campaign headquarters late last month said: “Mr. Macri’s government caused damage similar to what Argentina suffered in 2001: a debt default, no foreign-currency reserves, a steep devaluation and increased poverty…For us, it’s startling that the world believes that Macri is the solution.”

Mr. Fernández met with foreign investors during a visit to Spain earlier this month and pledged not to default on debt should he win the election, said a spokesman for Mr. Fernández.

Events have humbled Mr. Macri, who rose from president of the storied Boca Juniors soccer club to mayor of Buenos Aires and then president, pledging to open one of the world’s most closed economies and use his business acumen to turn the page on financial instability.

No one expected it to be easy. Under Mrs. Kirchner and her late husband,

In three terms from 2003 to 2015, Argentines became accustomed to paying some of the world’s lowest electricity bills as the state spent billions on energy subsidies. Payroll and welfare costs surged. The government dished out $1.3 billion to broadcast soccer matches free. 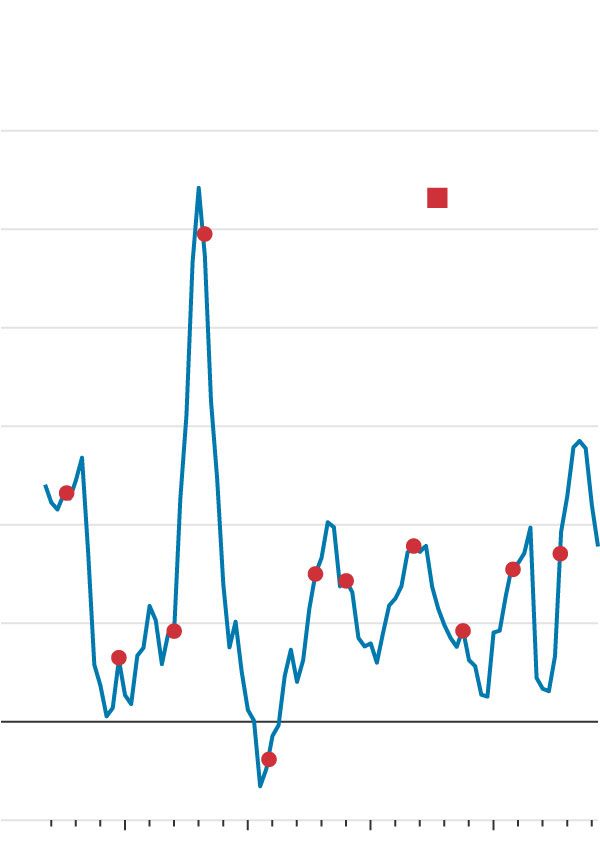 Capital outflows by residents in Argentina

The heavy Peronist spending tends to be followed by a non-Peronist opponent elected to clean up the economic consequences, which usually means an unpopular austerity program. No non-Peronist president has finished a term since the 1960s.

When Mr. Macri took power in December 2015, he put off drastic budget cuts, favoring a gradual approach to reduce spending. His administration borrowed heavily abroad to plug the deficit.

Last year, rising U.S. interest rates and worries about Argentina’s debt sent the peso diving, leading the government to tap the IMF for a $57 billion bailout, the IMF’s largest on record, not accounting for inflation.

In exchange, Mr. Macri doubled down on budget cuts, meaning hardship for Argentines like Fabián Rivera, 40, a father of six. In 2016, he was among 240 fired at the National Library, where worker numbers had jumped to about 1,050 from about 300 in 2005. This March, his wife lost her job there.

Mr. Rivera, who works odd maintenance jobs, and his wife plan to vote for Mr. Macri’s rival in October, hoping to get their jobs back under a Fernández administration. “We don’t know how to confront this economic situation that has almost left us in the street,” said Mr. Rivera.

If he wins, Mr. Fernández has pledged to stimulate the economy by boosting consumption and wages while containing inflation with a broad pact with employers—a well-worn Peronist recipe. In the interview he said his administration would pursue fiscal discipline and a balanced budget, and “the state won’t replace private capital.”

Argentina’s habits hark back to

How can Argentina extricate itself from its familiar cycles of crisis? Join the conversation below.

As the national labor secretary in 1943, he created health, pension and low-cost-housing benefits and enforced labor laws, such as indexing the minimum wage to the cost of living. As president, he brought unions under his control, nationalized utilities and public transport, and used the state to industrialize Argentina. Wages rose, but production plummeted, inflation soared and a revolt forced him into exile.

Mr. Perón left a legacy that the vast country still keenly feels, even celebrates. In Ushuaia, the world’s southernmost city, plants assemble consumer electronics that until recently sold in the domestic market at exorbitant prices. The state runs money-losing Aerolíneas Argentinas. Legions of inefficient companies are shielded from global competition, with no incentive to export.

A Perón-era policy requiring the state to buy agricultural products at low prices was updated for the modern age, with Mr. Macri’s predecessors forcing farmers to pay export taxes—a policy unheard of in modern economies. Manufacturing exports are also taxed.

Another hard reality is Argentina’s long overreliance on agriculture. When soybean and wheat prices are high, it can borrow dollars and repay. When prices fall, the central bank prints pesos to fill budget shortfalls; inflation shoots up.

“In economic terms, the history of our company is the history of Argentina,” said Alejandro Bestani, 57, who runs a family-owned food-processing business dating from the 1930s. “My professional life has been marked by inflation.”

His family expanded the business to become a leading Latin American peach producer, with 2,500 acres of farmland and processing facilities. Its Inca brand canned goods became a household name. After two bankruptcies, he said, the farms are all but gone and the brand diminished.

To survive, managers constantly renegotiate contracts. Prices must be adjusted regularly, even after companies deliver products. Most deliveries are limited to those who can pay upfront. Credit is almost nonexistent.

“Under high inflation, costs can eat you alive,” said Mr. Bestani. “You lose the focus of the business, you don’t develop new products, and you’re just sharpening the same numbers all day.”

—Alberto Messer and Juan Forero contributed to this article.

Write to Santiago Pérez at santiago.perez@wsj.com and Ryan Dube at ryan.dube@dowjones.com