WASHINGTON—U.S. officials are increasingly concerned that Turkey soon will mount a major incursion into northern Syria and trigger a clash with Kurdish fighters, an action that would likely prompt the Trump administration to remove all American forces from Syria to avoid the conflict.

Because a U.S. pullout would essentially end the fight against Islamic State there, it could set back ongoing efforts to undercut the group, which lost its so-called caliphate but remains what many U.S. officials consider a viable terrorist network that still can stage attacks against the U.S. and its allies and interests.

Turkey wants to resettle up to two million Syrian refugees currently living in Turkey in Syrian border towns that would be cleared of Kurdish forces known as the YPG, a group Turkey considers to be a terrorist affiliate of the Turkey-based PKK.

But while Turkey, a member of the North Atlantic Treaty Organization, views the Kurdish military organization as a terrorist group, U.S. officials say Kurdish fighters have spearheaded the fight to defeat Islamic State across Syria.

Washington has attempted to quell Turkish concerns by conducting joint military patrols in two Syrian cities and holding talks on Turkey’s request for a 300-mile safe zone along the border between the two countries.

Turkey wants to seize control of a 300-mile strip in northeastern Syria for what it calls a ‘safe zone’ to relocate up to 2 million Syrian refugees now living in Turkey. 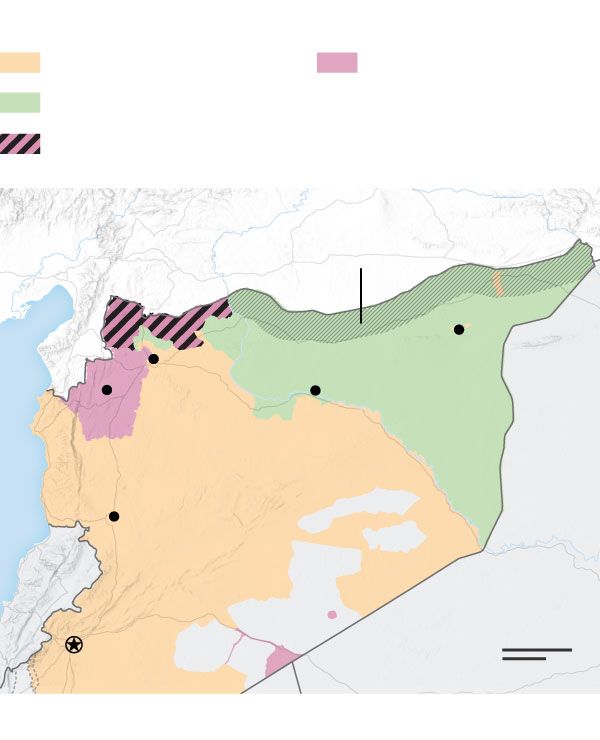 U.S. officials said this week that they have seen mounting evidence that Turkey is preparing to insert forces into northeastern Syria, a move that could place the remaining American force at risk.

“It’s a perfect storm, it’s really ugly. There may just be no choice but to leave,” said one U.S. official of the dilemma American policy makers may confront in coming days.

In Ankara, government officials said they were frustrated by the slow pace of joint efforts to create safe areas for refugees in northeastern Syria. The U.S. hasn’t formally warned Turkey about a possible withdrawal from Syria, one person familiar with the matter said. If the U.S. conveyed such a message, the person added, it would be interpreted as “a perception ploy,” a way to tell the Turks that they could be worse off dealing alone with the Assad regime, and its main backer, Russia.

told parliament’s opening session that his country had no choice but to act unilaterally to create a safe zone in northern Syria.

“We have not achieved any of the results we desired,” Mr. Erdogan said. “Turkey cannot lose even a single day on this issue. There is no other choice but to act on our own.”

YPG representatives refused to comment and a spokesperson for the Syrian Democratic Forces, a coalition led by Kurdish fighters, didn’t respond to requests for comment.

U.S. attempts over the past year to elicit European interest in the Syrian refugee resettlement plan fell short, and talks between Washington and Ankara have dragged on.

Turkish Foreign Minister Mevlut Cavusoglut said the U.S. wasn’t sincere about cooperating in northeastern Syria. “We think the process under way with the U.S. won’t take us to the point we want. Information coming from the field proves it,” the minister told Turkish television Wednesday.

Turkey could choose to insert a small number of forces, potentially drawing a muted Kurdish reaction. But if Turkey conducts a widespread incursion using heavy arms and forces, the U.S. may have no choice but to pull its more than 1,000 troops out of Syria to avoid a potential conflict with a NATO ally, officials said. The U.S. had more than 2,000 troops in Syria last year.

U.S. officials said they harbor deep misgivings about withdrawing troops from the area and leaving their close Kurdish allies to an uncertain fate, a move that would send a downbeat message about U.S. reliability to other current and prospective U.S. partners world-wide.

who now is facing an impeachment inquiry, has tried to disengage the U.S. from conflicts overseas, including in Syria. Last year, he called for a complete U.S. withdrawal from Syria, but ultimately reversed himself after a backlash by GOP allies and top military officials.

The problems associated with pulling U.S. support from Kurdish allies were among arguments against a full U.S. withdrawal last year. However, military officials said they have grown resigned to the situation, adding that an armed clash between Turkey and Kurdish forces would heighten prospects of a pullout.

The complex issues surrounding the U.S. presence in Syria will fall squarely on the Pentagon’s new chairman of the Joint Chiefs of Staff, Army Gen.

U.S. officials have grown alarmed about Ankara’s moves in part because there is less confidence within the U.S. government that the U.S. will get an adequate heads up that Turkey is moving in, one official said. Any warning could come less than 48 hours before Turkey takes action.

“It seems more and more likely based on the actions they are taking in southern Turkey,” said one U.S. official, referring to movements of equipment and personnel.

Turkey has long complained about the buildup of Kurdish forces and influence along its southern border, calling it a direct threat. Since the start of the Syrian civil war in 2011, Turkey has entered Syria twice in a bid to stop Kurdish expansion.

In response, U.S. officials had set up joint U.S.-Turkish patrols to cool tensions. Last year, in the Syrian city of Manbij, U.S. and Turkish forces conducted joint patrols after Turkey threatened to launch an offensive against Kurds based at the border. Since September, U.S. and Turkish forces have conducted joint patrols in the Syrian city of Tal Abayd.

“The U.S.’s current position in northeast Syria is not tenable over the long term,” said Jennifer Cafarella, a Syria analyst at the Washington-based Institute for the Study of War. “The U.S. does not have enough forces in Syria to prevent the Turks from crossing the border and will not fight Turkey, a NATO ally, if that occurs.”

—David Gauthier-Villars in Istanbul and Nazih Osseiran in Beirut contributed to this article.

Write to Gordon Lubold at Gordon.Lubold@wsj.com and Nancy A. Youssef at nancy.youssef@wsj.com