President Trump’s latest move to end U.S. involvement in Syria drew a burst of condemnation from dedicated supporters, who warned that abandoning a key ally, the Kurds, and walking away from the fight against Islamic State would cause irreparable damage to U.S. interests.

(R., Ky.) urged Mr. Trump to “exercise American leadership” and keep U.S. troops in northern Syria, joining a chorus of lawmakers who warned against withdrawing from the area.

In the wake of the criticism, Mr. Trump tweeted on Monday that he would “totally destroy and obliterate the Economy of Turkey” if that country did anything off limits. Hours earlier, he had said the U.S. would stand aside to let Turkey launch a military offensive against Kurdish fighters in northeastern Syria.

The president’s latest shift on Syria comes against a backdrop of increased pressure from the Democratic-led House, where lawmakers are weighing impeachment in connection with his request that Ukraine investigate a political rival.

Last year, Mr. Trump abruptly ordered a full withdrawal of U.S. forces, triggering the resignation of Defense Secretary Jim Mattis. Amid an outcry, Mr. Trump reversed course and decided to keep some U.S. forces in Syria to prevent a resurgence of Islamic State and to challenge Iranian and Russian influence.

“American interests are best served by American leadership, not by retreat or withdrawal,” Mr. McConnell said on Monday. He didn’t directly criticize Mr. Trump, but reminded him of the Senate’s January vote to keep U.S. troops in Syria.

Mr. Trump revisited the issue on Sunday, when President

Dozens of U.S. special-operations forces began moving away from the border between Syria and Turkey on Monday, repositioning within the country, but not withdrawing for now, U.S. defense officials said.

There were no further U.S. troop movements, and U.S. officials played down prospects for any wholesale withdrawal of the roughly 1,000 U.S. troops from Syria. A senior administration official said that the U.S. had no plans to leave Syria and had moved about 100 troops to other parts of the country as a precautionary measure.

“We don’t want those [U.S.] troops to be there and thus send a signal that they are supporting the [Turkish] operation, nor do we want them to be there and look like we may be trying to stop the Turks from moving in,” the official said. “So therefore the best thing is just to get some troops out of the way.”

The U.S. steadily has held talks with Ankara to try to resolve its concerns along its border with Syria, but had grown concerned recently that Turkey would grow impatient with the Kurdish presence there and mount an offensive.

In response to Mr. Erdogan’s call for an incursion, the White House issued a late-night statement saying U.S. troops would leave and allow Turkey to assume control over the area, where Kurds are holding around 12,000 Islamic State fighters and about 58,000 family members in prisons and camps.

Mr. Trump said Turkey would assume responsibility for them, but Kurdish leaders warned that they would have to reduce the number of people guarding Islamic State detainees because they had to turn their attention toward the looming Turkish offensive.

The U.S.-backed Syrian Democratic Forces, a Kurdish-led group, said it had been betrayed by Washington and vowed to fight “at all costs.”

“We in the SDF will not hesitate for a moment to defend ourselves and we call on our people of all sects and ethnicities…to close ranks with their legitimate forces to defend our country against this Turkish aggression,” the group said.

“Once we captured ISIS, I don’t want to stay there for the next 40 years,” Mr. Trump said. “It’s not going to do anything.” He added: “We want to bring our troops back home, and I got elected on that,”

A senior administration official said Mr. Trump consulted with advisers over the weekend. The president took those discussions into consideration but in the end, “he’s had enough,” the official said.

The official acknowledged the likelihood that the decision will strain relations with the Kurds, as well as coalition partners in Europe and elsewhere. “He knows it,” the official said of the president. “They’re just not his priority.”

A top concern of U.S. defense officials is the security of prisons and camps. In the event of a Turkish incursion, U.S. officials worry that SDF fighters would abandon sites housing Islamic State detainees and their families.

“The likelihood of them releasing foreign terrorist fighters and ISIS hard-liners is a huge recipe for disaster,” a defense official said. “That is the biggest problem we have right now.”

What effects do you expect the withdrawal of American troops from the border area to have in the coming days? Join the conversation below.

The U.S.’s decision to pull troops back is a particularly worrying development for Israel, as it confronts a robust Iranian presence on its border with Syria. Israeli officials have expressed concern about Iran’s ability to transport advanced weapons through Iraq and Syria to Hezbollah in Lebanon. Israel has carried out strikes to roll back Iranian entrenchment in the region.

“I prefer that American troops will be in the area, because they will influence it and they are our best allies,” said

head of Israel’s National Security Council from 2016 to 2017 and a fellow at the Foundation for Defense of Democracies. “If you want to confront Iran in Syria, you have to be there.”

The U.S. is withdrawing troops from inside a 300-mile strip that Turkey wants as a ‘safe zone’ for displaced Syrians. 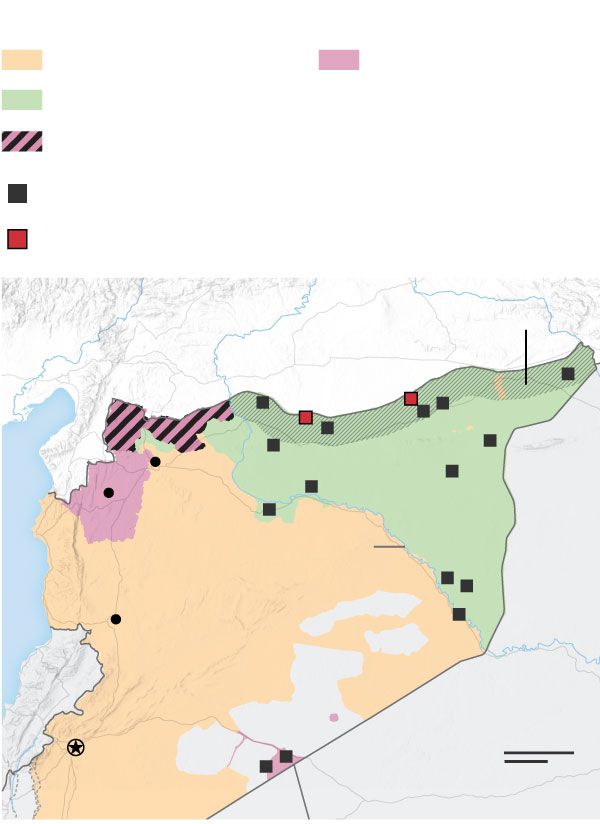 Locations U.S. is known to be leaving

Kurdish leaders in Syria long feared that the U.S. would abandon them after the fight against Islamic State, despite assurances from top American officials.

“For the U.S.’s regional allies, the lesson should be clear: This is a president and an administration that, in the breach, is not interested in fighting their battles for them,” said

a senior analyst for International Crisis Group, a nonprofit that focuses on conflict prevention.

Write to Dion Nissenbaum at dion.nissenbaum@wsj.com and Gordon Lubold at Gordon.Lubold@wsj.com