growing coffee is a dream. After growing all manner of produce on his Sicily farm, the third-generation farmer harvested his first coffee crop this year.

Mr. Palazzolo is still experimenting but his goal is to produce the first commercial coffee grown in Italy—a nation well-known for roasting coffee beans, but not for growing the tropical plant from which they come.

Growing coffee in Sicily may have been impossible a few decades ago. Coffee has traditionally grown only in the so-called bean belt in the tropics, stretching from Central America to Africa to Asia. But rising temperatures are making parts of the bean belt too hot for coffee, and other regions suitable for the crop.

By 2050, climate change could decrease the area in the tropics suitable for growing coffee by as much as 50%, according to the Climate Institute, a Washington, D.C.-based nonprofit focused on climate change.

Farmers outside of traditional coffee-growing regions, in places like California, Australia and Saudi Arabia, already are experimenting with the crop. Within the bean belt, some coffee farmers are moving to higher elevations in search of cooler air, says

a scientist at the U.K.’s Royal Botanic Gardens who studies global coffee growth.

But not everyone thinks those efforts will be sustainable. While some new regions could develop a more suitable climate for coffee-growing, it may be costly and difficult to grow the crop in those places. So researchers also are working on another solution: breeding new coffee varieties that can better tolerate the changing climate conditions in the bean belt.

There is no doubt that coffee grown outside of traditional areas can be high quality, tasting experts say, but it also bring new challenges, as well as weather risks, such as frost. In a coffee-growing experiment in Laos, a frost in 2017 destroyed most of the crop, according to World Coffee Research, a nonprofit research firm dedicated to protecting and enhancing coffee supplies world-wide.

a professor at University of California, Santa Cruz. It needs a lot of water and just the right amount of sun. It’s very sensitive to frost or natural disasters such as hurricanes.

And it’s expensive. Growing coffee outside of the rain-heavy tropics requires cost-intensive irrigation. In developed countries, labor costs are so high that the coffee beans they produce becomes a luxury product.

Frinj Coffee, based in Santa Barbara County, Calif., pays farmworkers at least $15 an hour. (By comparison, the minimum wage for agricultural work in Guatemala is roughly $12 a day.) Last year Frinj coffee sold for $16 a cup in Blue Bottle Coffee shops. 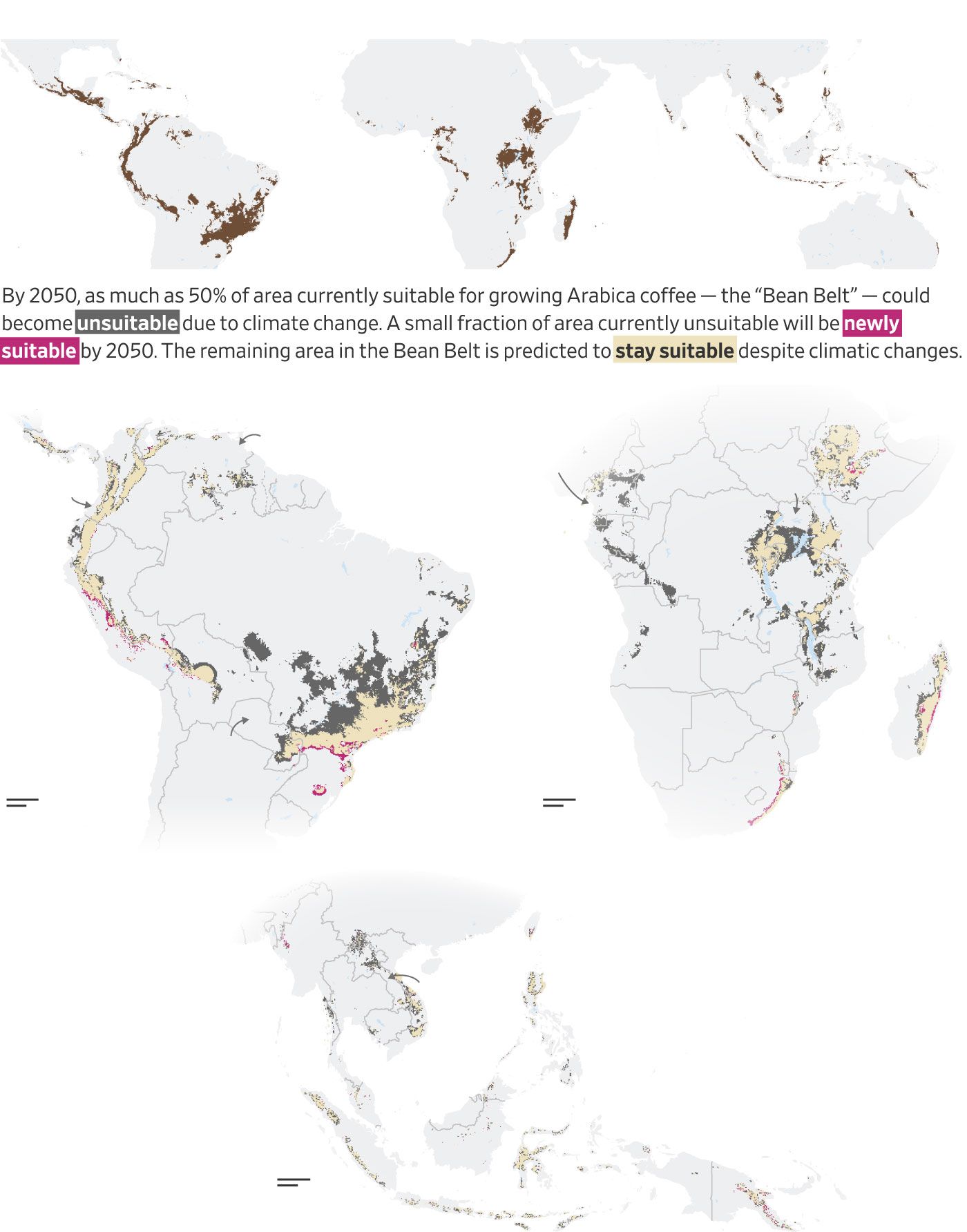 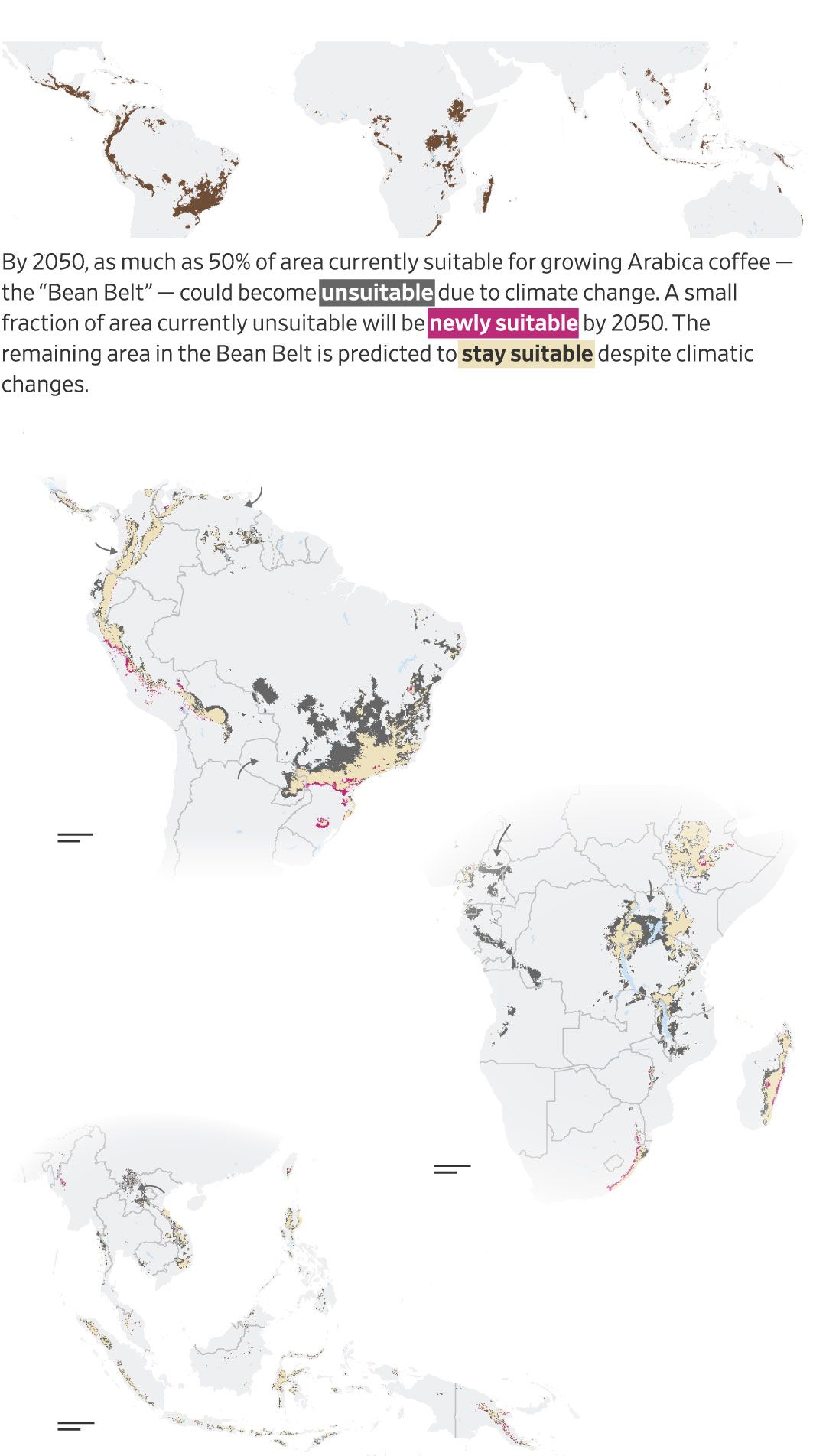 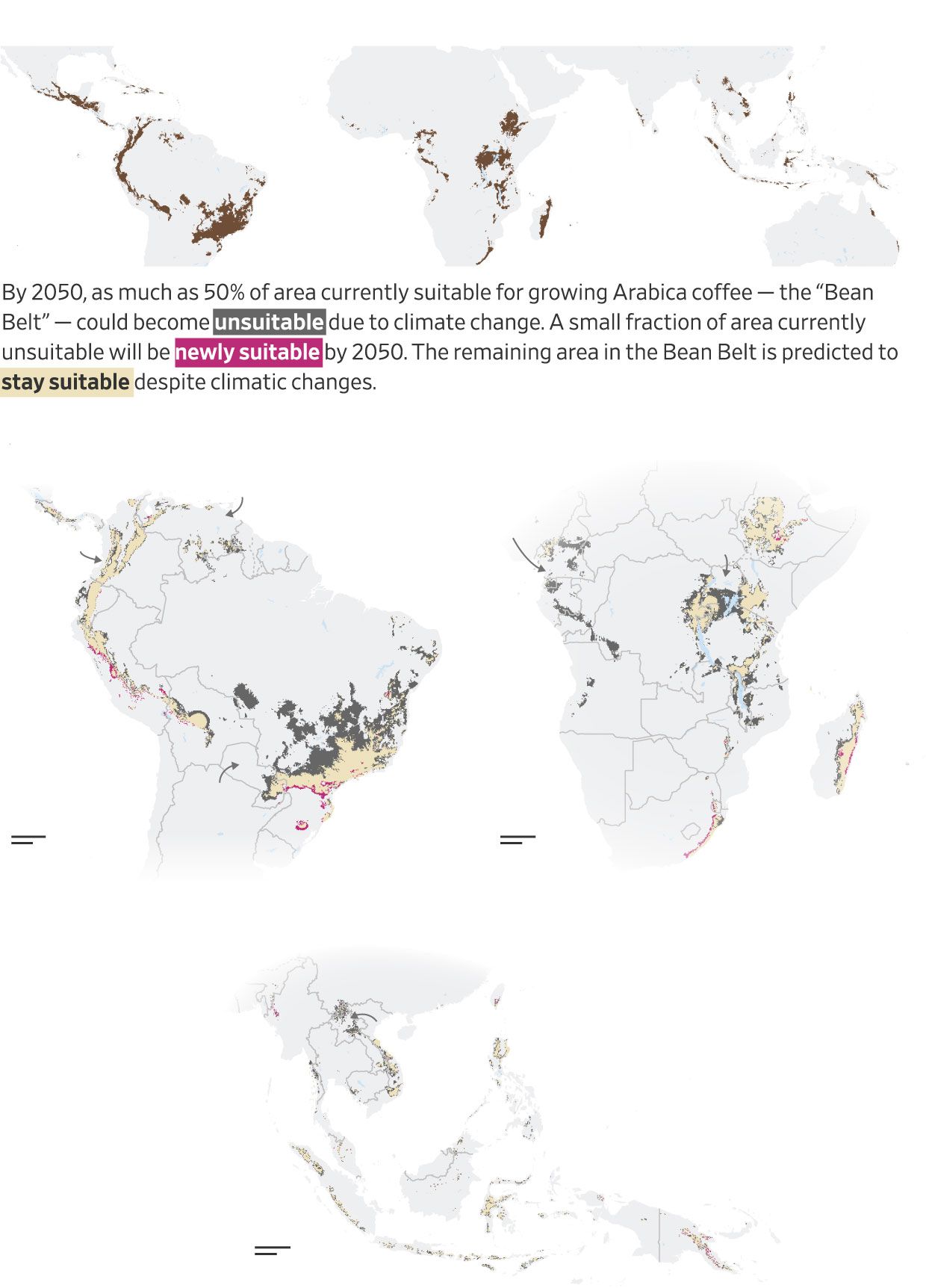 “I saw an audience that was looking for a unique-tasting coffee and was willing to pay for it,” says Frinj Coffee co-founder and chief executive

a farmer with 30 years’ experience who began selling coffee in 2013. He expects California coffee to remain popular as a high-end product for connoisseurs.

Although 42 private farms in Southern California are now growing beans for Frinj, scientists such as Dr. Philpott say growing coffee in California might not be sustainable because it requires so much irrigation.

communications director at World Coffee Research, a nonprofit research firm that is coordinating scientists’ efforts to engineer coffee varieties that can thrive in higher temperatures.

Experts are working to map the coffee genome, identifying and isolating the individual genes that make up the world’s 124 known species of coffee. They aim to identify genes linked to heat- or disease-resistance, then crossbreed species to produce plants with these features.

Last year coffee leaf rust, a fungus caused by unusually high temperatures and high-altitude rains, devastated the coffee crop in Central America, affecting 70% of farms, according to World Coffee Research. When the next epidemic hits, experts hope to have a variety that will get a sniffly cold instead of pneumonia.

Still, developing these varieties might take decades. Getting them into the fields of coffee farmers—who typically replant every 20 to 30 years—might take even longer.

Adding to the challenge, scientists will have to outrun threats of species extinction. Commercial coffee production focuses on two varieties: arabica, used in high-end specialty coffee, and robusta, a less expensive bean used in instant coffee or mixtures with arabica. The other types are uncultivated strains growing in forests around the world, and scientists often turn to them to find heat- or disease-tolerant genes. With deforestation, however, those uncultivated varieties have come under threat: 75 are at risk of extinction, according to Dr. Davis.

To keep coffee breeding possible, scientists need to keep those wild varieties alive. Experts say they can develop coffee for today’s pests and heat conditions, but can’t know the pests and climate conditions that may threaten coffee decades from now. If some species disappear, the pool of resources for future breeding will diminish, they say.

“We’re losing a reservoir of potential genes that could prevent disasters, farmer losses and other things,” says

Ms. Haggin is a reporter for The Wall Street Journal in New York. Email her at patience.haggin@wsj.com.

Corrections & Amplifications
Timothy Schilling is the former CEO of World Coffee Research. An earlier version of this article incorrectly referred to him as the current CEO. (Oct. 9, 2019)

How concerned are you about the climate risks for coffee production and other agriculture? Join the conversation below.