The Turkish military began an offensive in Syria to seize territory held by U.S.-backed Kurdish forces, opening a new front in the war-ravaged country and drawing a renewed defense by President Trump of his decision to shift U.S. troops out of the area, effectively enabling the start of the assault.

Turkish authorities kicked off the operation on Wednesday despite U.S. warnings that it would punish Turkey if it attacked the Kurdish militants, Washington’s partner in the fight against Islamic State in northeastern Syria. The Kurdish militias have vowed to defend their semiautonomous region, which borders Turkey.

of Turkey said the offensive had started, Kurdish-led forces in Syria said they were witnessing Turkish jet fighters conducting airstrikes on the Syrian town of Ras al-Ain. Later in the day, hours after sunset, Turkey launched its ground offensive, according to Turkish officials.

Turkish officials said their twin goals in the offensive, Turkey’s third in Syria since 2016, were to drive armed Kurdish groups it views as terrorists back from its border and to create a safe zone to relocate millions of Syrians who have fled the eight-year conflict.

In comments Wednesday, Mr. Trump said he didn’t support Turkey’s actions. The U.S. “does not endorse this attack and has made it clear to Turkey that this operation is a bad idea,” Mr. Trump said in a statement issued several hours after the Turkish operation began.

Turkey says it aims to clear a swath of Kurdish-held territory in Syria, starting with a 70-mile strip between Tal-Abaid and Ras al-Ain, and create a safe zone for displaced Syrians. 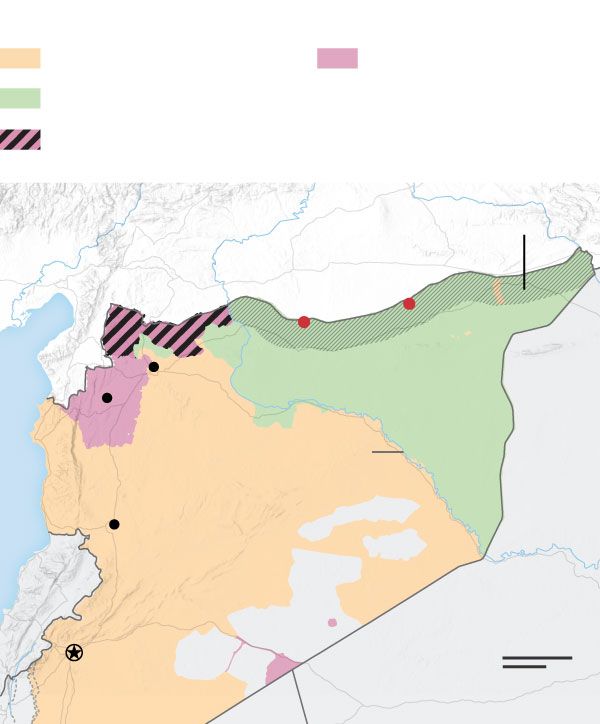 In remarks later in the day, Mr. Trump said he could back sanctions, “and much tougher than sanctions,” if Mr. Erdogan doesn’t proceed in a humane fashion. He didn’t elaborate on what that retaliation would be or what sort of action would be considered out of bounds.

Mr. Trump also insisted that it is Turkey’s responsibility to protect civilians and make sure its offensive doesn’t help the Islamic State militant group, or ISIS. He also said no U.S. troops remained in harm’s way, after pulling them back from border posts ahead of the offensive.

Russian and Syrian-backed troops were holding firm near the city of Deir Ezzour, U.S. defense officials said, adding they believed those forces were assessing whether they could move further into northeastern Syria as U.S. and allied Kurdish forces were shifting positions.

Joint U.S.-Turkish patrols on the ground have ended and U.S. troops are no longer in contact with Turkish forces, the Pentagon said. The U.S. military also moved on Monday to suspend communications with Turkish counterparts about future air missions, and said they might seek other ways to deconflict the increasingly crowded airspace.

The Turkish incursion also presented implications for joint efforts to counter Islamic State extremists. Because the U.S.-backed and Kurdish-led Syrian Democratic Forces said it couldn’t conduct anti-Islamic State missions while battling a Turkish incursion, the U.S. military said it has had to suspend those joint operations.

Turkey notified the U.S. military beforehand about its planned artillery and air operations as well as when its forces planned to move across the border, U.S. defense officials said.

On Capitol Hill, lawmakers unveiled a two-page outline for a bipartisan package that would impose harsh sanctions on Mr. Erdogan and his cabinet members, as well as the country’s military and energy sector, in response to the military incursion. They said they would ask for an immediate vote when Congress returns from recess next week.

“We can’t abandon the Kurds now. We can’t turn it over to Turkey. To think that will work is really delusional and dangerous,” said co-sponsor Sen. Lindsey Graham (R., S.C.), a close ally of the president but a fierce critic of his Syria decision. “Pray for the Kurds,” he said on Fox News.

Mr. Trump responded to Mr. Graham’s criticisms later in the day, saying: “Lindsey would like to stay there for the next 200 years and maybe add a couple hundred thousand people.”

Inside Syria, the Kurdish-led Syrian Democratic Forces said it was sending hundreds of its fighters toward the northeast, reorienting them from focusing on Islamic State. Mr. Erdogan has said he wants Turkey to seize control of a 300-mile swath inside Syria that is under Kurdish control.

Turkish officials said they would first focus on conquering a narrower, 70-mile strip between Ras al-Ain and Tal-Abiad, another Syrian border town.

But rockets fired from Syria struck a Turkish town beyond that 70-mile perimeter on Wednesday, according to Turkish media. The Syrian Kurdish forces, who have vowed to battle Turkey along the entire border, declined to comment on the rocket attacks but said Turkey-backed fighters had returned fire on a town of similar size inside Syria.

In that town, Qamishli, Julia Boutros was inside a hotel with her 4-year-old daughter when several strikes shook the building. “She went crazy when she heard the sound,” the 37-year-old said.

Mr. Trump had condoned the Turkish operation on Sunday night and ordered U.S. troops to withdraw from positions on the Syrian side of the border. In the face of sharp opposition from U.S. lawmakers concerned about the fate of the Kurds, the president then threatened retaliation against the Turkish economy if Ankara takes steps he considers to be off limits.

Mr. Trump on Wednesday defended his decision to pull American soldiers out of the area where the offensive was under way. “I did not want to fight these endless, senseless wars—especially those that don’t benefit the United States,” he said.

What response, if any, should the U.S. make to the Turkish offensive in Syria? Join the conversation below.

(D., Md.) unveiled a framework that would impose sanctions against U.S. assets of Turkish political leadership, including Mr. Erdogan himself, his vice president, ministers of defense, foreign affairs, trade, and energy, treasury and natural resources.

Their bill also would bar U.S. military assistance, sanction any foreign person who conducted military transactions with Turkey for aircraft, automotive equipment, or weapons, and restrict visas for Turkish political leaders to travel to U.S. Mr. Erdogan is slated to visit White House next month. Mr. Graham said he expected strong support for the proposal.

Trump administration officials briefed Capitol Hill staffers behind closed doors on Tuesday about the situation at the Turkey-Syria border, according to three people familiar with the matter.

said Wednesday he was very worried about the Turkish military plans, a view echoed by other leaders in Europe.

chief of the North Atlantic Treaty Organization, called on Turkey to act with restraint and said he would raise the issue with Mr. Erdogan in Istanbul on Friday. Russian President

the main backer of Syrian President

urged Mr. Erdogan in a phone call on Wednesday not to damage overall efforts to resolve the Syrian crisis, according to the Kremlin.

The Assad regime condemned the Turkish incursion. It has vowed to reclaim control of the northeastern area administered by the Kurds.

Relations between Turkey and the U.S. have been rocky. The two NATO members have been sparring over Ankara’s decision to procure S-400 advanced air-defense missile systems from Russia, which U.S. officials say pose a security risk to the West’s military alliance.

The U.S. military warned earlier this year that Islamic State was already regaining strength in Syria, months after Mr. Trump declared an official end to the group’s self-declared caliphate, which stretched across the Iraq-Syria border. The U.S. has about 1,000 military personnel in Syria, where they work side-by-side with the Kurdish forces to prevent Islamic State from regaining a foothold in the region.

The Syrian Democratic Forces are holding about 12,000 Islamic State fighters in detention centers in Syria. About 2,000 of them are foreign fighters, and the U.S. has been unable to reach agreements with world leaders to take the fighters back, leaving their fate in limbo.

On Wednesday, Mr. Trump said he expects Turkey to assume responsibility for them.