At a time of deep political division in the American electorate, a small group of counties across the nation has shown extraordinary political flexibility, voting for the winner in every presidential election since 1980.

These 19 counties—well less than 1% of the nation’s total—have in the last 10 elections backed Republicans for the White House six times and Democrats four times.

Political scientists are quick to point out that there’s no perfect presidential bellwether. Past success in picking a winner doesn’t promise accuracy in the future.

From Reagan to Trump, a Perfect Record

The 19 counties that have sided with the ultimate winner in every presidential election since 1980 are scattered across the country. Wisconsin, a top 2020 battleground, has the most of any state with four. 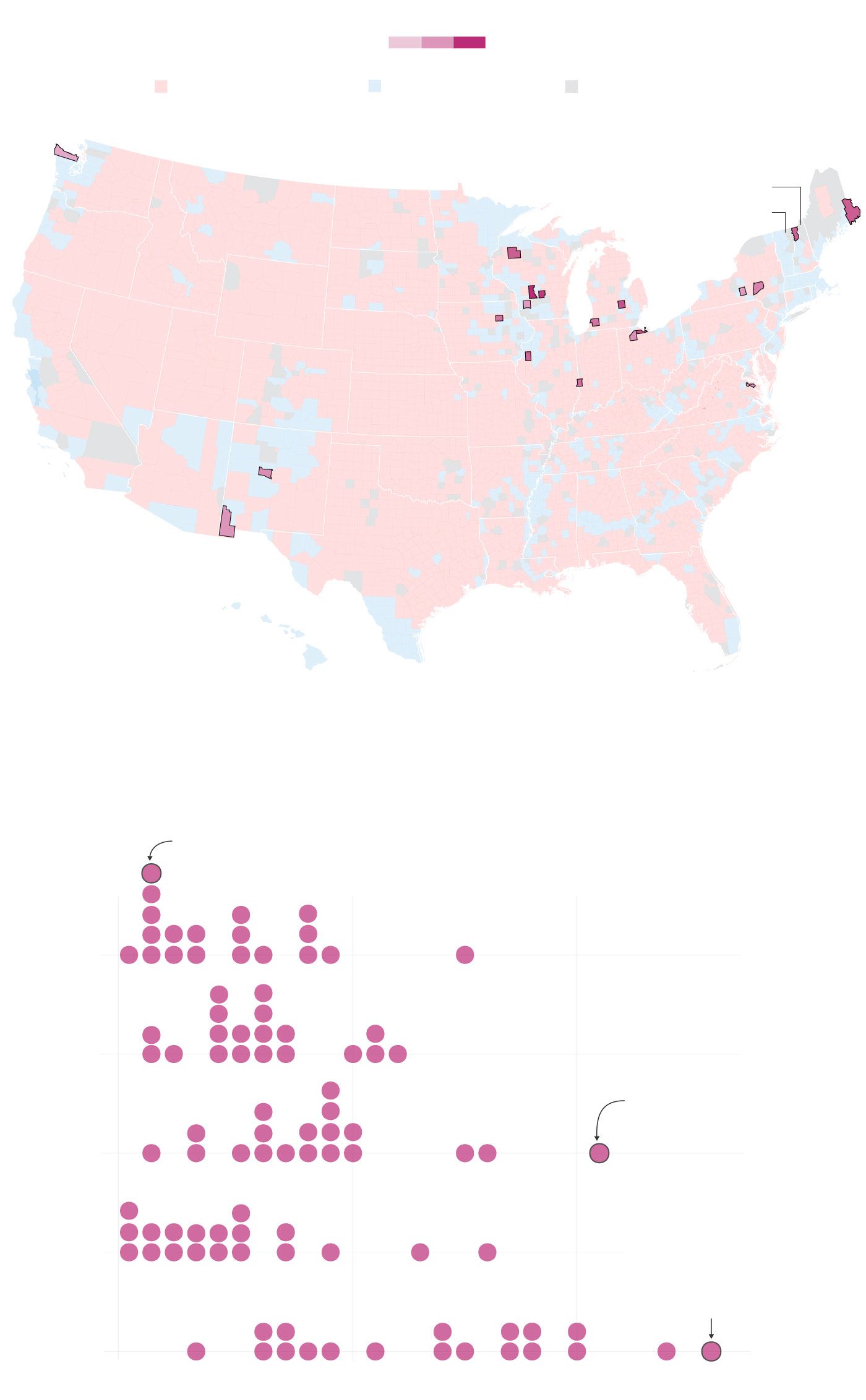 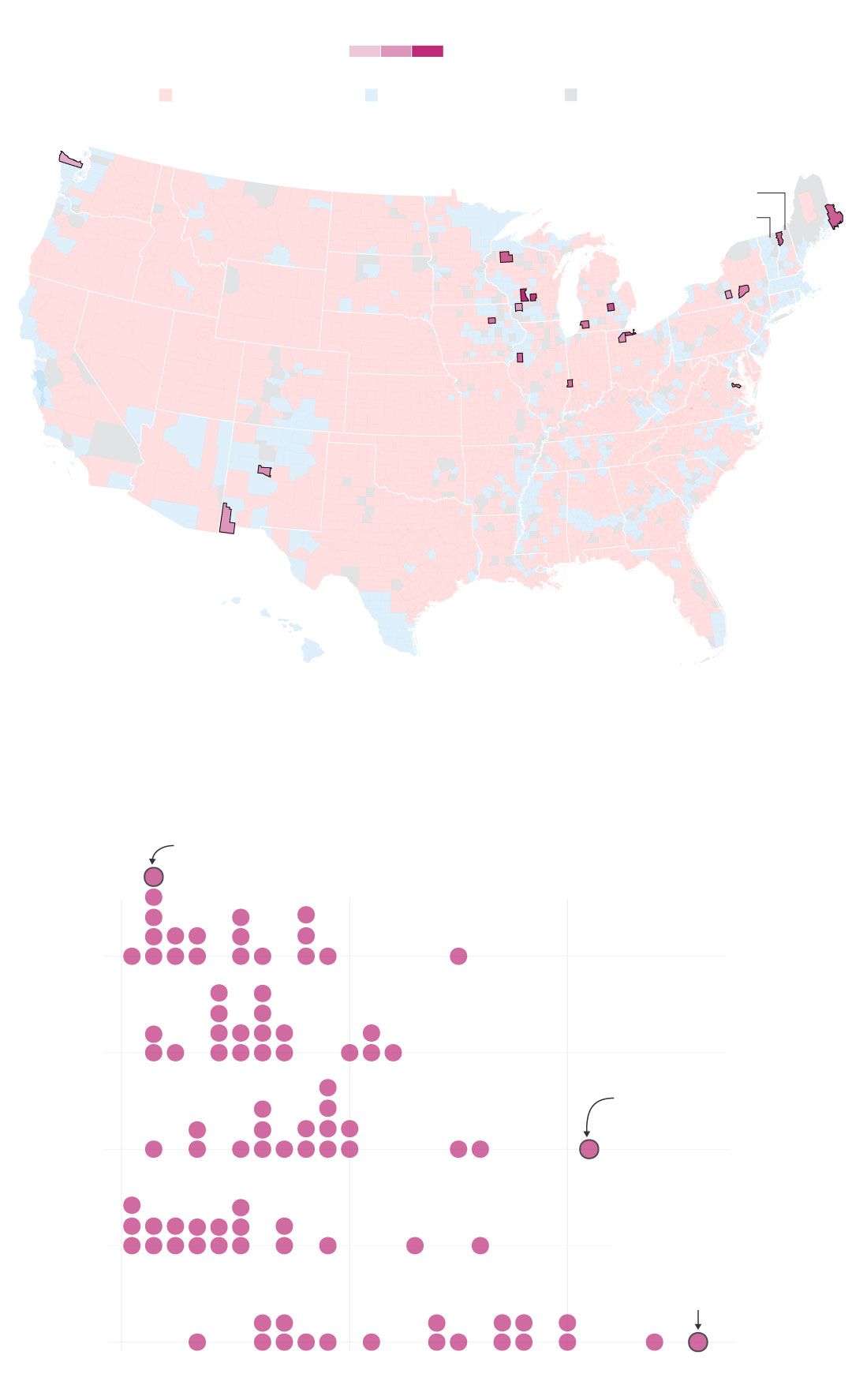 Of the 19 counties that have tracked the presidential winner, all have swung both Democrat and Republican, with a growing difference in margin of victory. widening since 2000. 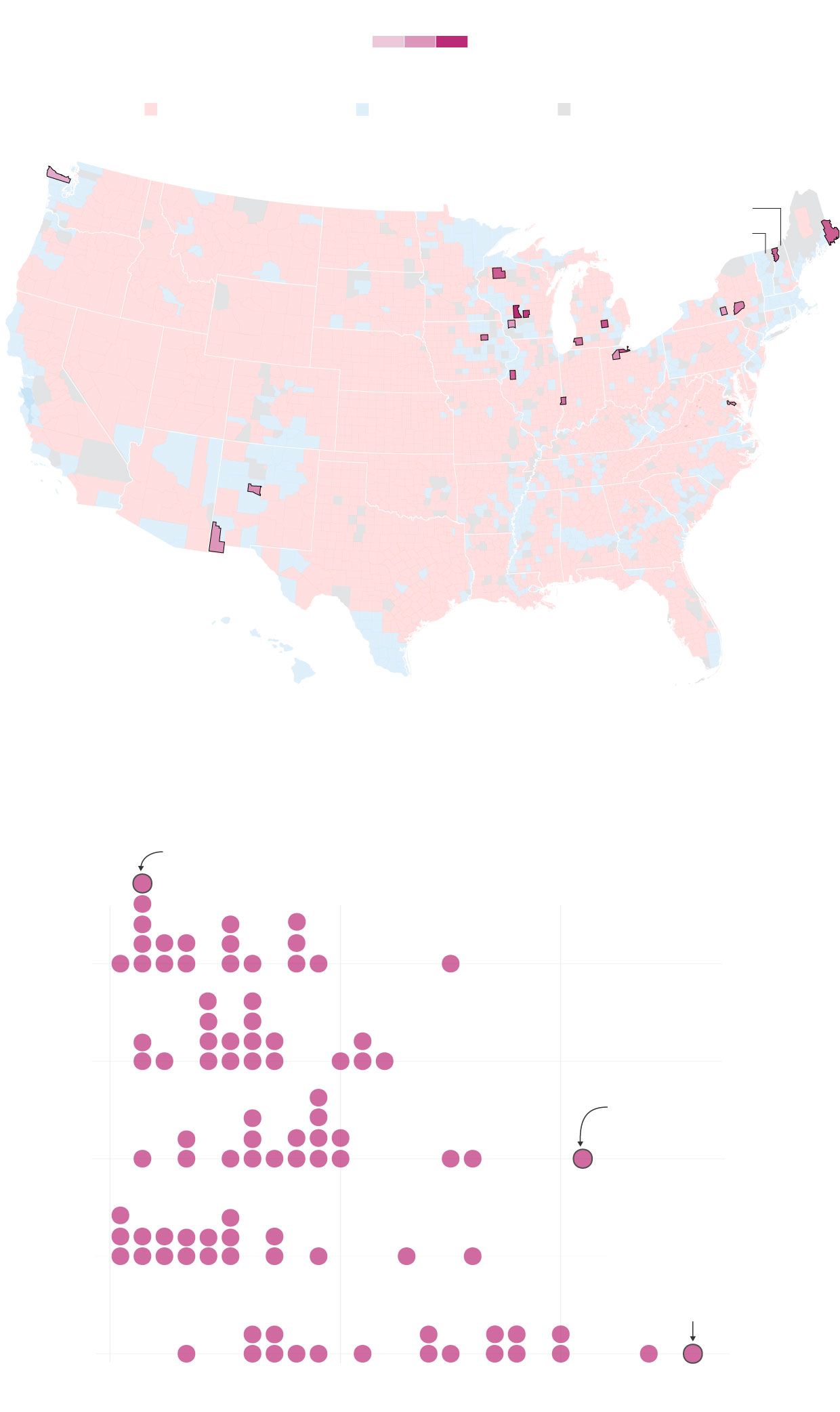 Voted Democratic in majority of elections

Voted Republican in majority of elections

Still, these counties may offer lessons for the 2020 presidential election, illustrating the types of places President

would likely need to win again in order to keep the White House—and that Democrats might have to flip to take it back from him.

Picture of a Perfect County

These bellwether counties often share demographic similarities such as being older and much less diverse than the national average. 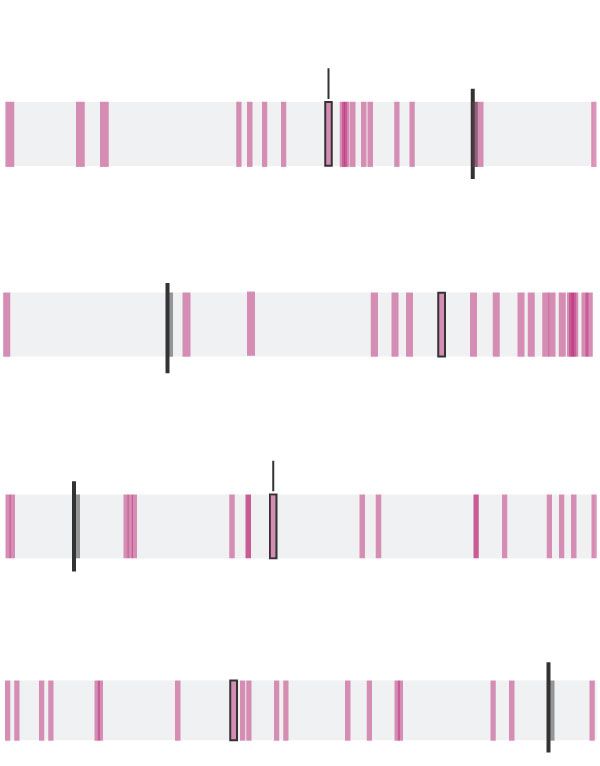 Percentage with a bachelor’s degree or higher

A Wall Street Journal analysis shows that the counties with “perfect” voting records from 1980-2016 largely have educational attainment levels below the national average, and they all saw slower-than-average population growth between 2010 and 2018. All but one of the counties have median household incomes below the national average, and they tend to be older and much less diverse than the nation as a whole.

From an economic standpoint, they are a mixed bag. Just more than half had unemployment rates above the national average for July, while some were well below that benchmark.

Wisconsin, a battleground Mr. Trump narrowly won in 2016, has four of these counties, the most of any state.

Journal reporters visited four such counties across the country and spoke with dozens of voters to understand what makes them so politically nimble and to get a sense of the mood ahead of the 2020 election.

run the biggest dairy operation in Richland County, milking 3,000 cows three times a day on a $1.6 million rotary parlor that holds 72 animals at a time.

They both voted for President Trump in 2016 and would like to do so again. They just aren’t sure they can afford it.

“Having 16 trade wars at a time is a problem,” Mr. Schmidt said during a rare break on a farm that has been in his family for three generations. “It’s dug deep into our pockets.”

Christy Adsit, owner of Christy’s Sunny Side Bakery, talking with a customer in Richland Center, Wis.

Wisconsin has lost more than 600 dairy herds this year, U.S. Department of Agriculture data shows. The Schmidts say they are feeling the pain, too. Lower commodity prices are helping competitors who don’t raise their own feed like they do, and China had been a bright spot for dairy exports as Americans drink less milk from cows.

in 2016 by 5.5 percentage points. It was the narrowest margin among the four Wisconsin counties that have backed the presidential winner since

a vice president at the Richland County Bank. “But the non-ag sector is flourishing. You have to not want to work to not be working.”

Do you think counties that voted for President Trump will flip in the 2020 election? Join the conversation below.

The shortage of workers has delayed construction of a new community aquatic center, and it’s made many business owners here open to more immigration despite Trump administration efforts to reduce the number of people moving to the U.S. The county’s unemployment rate was 2.9% in July, tied for the lowest among the 19 counties reviewed.

The Schmidts say they are disappointed in the lack of a comprehensive immigration overhaul. Roughly two-thirds of the 40 workers they employ are Mexican, the couple said.

“I was voting with the thought that he was going to do something on immigration reform,” Mr. Schmidt said. “We need the labor.”

If the trade situation doesn’t improve before November 2020, Mr. Schmidt said he would consider voting for a Democrat such as former Vice President

“If we don’t get these trade deals done, we’ve got to vote to save ourselves,” he said.

Mr. Trump maintains some popularity with others in the county.

an independent voter who runs a cafe in Richland Center, said she couldn’t bring herself to vote for Hillary Clinton in 2016 and doesn’t like the more liberal messages she’s hearing from some of those in the 2020 Democratic field.

“Trump has brought a lot of issues forward that people didn’t want to deal with,” the mother of four said. “I’m a business owner. I don’t want to be in a socialist country.”

COLONIAL BEACH, Va.—Westmoreland County, a rural locale of nearly 18,000 residents in what is known as the Northern Neck, has deep ties to the nation’s founders.

The county was the birthplace for

in 1807. It was the site of the 1766 Leedstown Resolves, in which more than 100 people declared their objections to the British Stamp Act in a precursor to the Declaration of Independence.

Full of transplants from the Washington, D.C., area, the county is home to small manufacturers, farms and oyster fisheries along the Potomac and Rappahannock rivers. A top employer in the area is the Naval Surface Warfare Center in Dahlgren, just beyond the county’s border.

Westmoreland’s politics have been evenly divided for decades. Since 1980, the county has cast nearly 66,000 total votes in presidential races. The results are practically a clean split, with just 201 more votes going to Republican candidates than Democrats during that period.

a Republican member of the county’s board of supervisors, said the body is composed of two Democrats, two Republicans and one independent, and most resolutions pass on a 5-0 or 4-1 vote.

“Everybody down here is just fed up with national politics as far as what’s going on. Nobody seems to be getting along,” Mr. Culver said. “We don’t disagree so much because we talk it out and work things out to get things accomplished.”

Nonetheless, Lorraine Horbaly, 71, a Democrat from Montross who became active in local politics here after the 2016 election, said Mr. Trump’s victory was a galvanizing event for many. She conducts weekly voter-canvassing outings with a group of retired women.

“Almost to a person, I think they would say I’ve never done this before, I’ve never been active before,” she said.

LOS LUNAS, N.M.—Nestled along the Rio Grande Valley about 30 miles south of Albuquerque, Valencia County has voted with the winner of every presidential election since 1952, though part of the county was partitioned in 1981 to create a new county.

The county has long been home to farmers and ranchers but also has deep ties to the railroad industry. Belen, the county’s second-largest city, is known as “The Hub City,” a reference to its role as a central depot for the Santa Fe Railway.

During the past decade, Valencia has seen an influx of commercial development, bringing in newcomers along with the prospects of jobs.

Facebook is building a new data center in Los Lunas, which has led to hundreds of construction jobs. The county has also welcomed a Niagara bottling plant and Keter Plastics, an Israeli plastics manufacturer.

Facebook is building a new data center in Los Lunas, which has led to hundreds of construction jobs.

Still, the county unemployment rate of 5.8% in August was about a percentage point higher than the state’s average, and about one in five residents live in poverty. That dichotomy makes the county ripe to switch allegiances in presidential elections.

Mr. Sanchez said the county was once a steady Democratic voting bloc, but has become more competitive in recent decades with an influx of evangelical Republicans and independent voters.

an independent voter and former city administrator who is the general manager of a cutlery manufacturer, said he is skeptical Mr. Biden or

Mr. Jones, 35, offered two words when asked what kind of Democrat would have the best chance: “A moderate.”

“We believe in education and public goods, but we’re a little leery of too much government,” Mr. Jones, who voted for Mrs. Clinton in the last election, said during an interview at Rada Cutlery’s manufacturing facility on the edge of town.

Mr. Trump soundly beat Democrat Hillary Clinton here in 2016, 53.2% to 39.6%. Al Charlson, the local Democratic Party chairman, said it would be a major challenge for his party’s nominee to win Bremer County. “We will be close, but this county will be an uphill climb,” he said.

The county had an unemployment rate of 2.3% in August, below the statewide average of 2.6%. A local college provides some economic stability, along with a mix of small manufacturing, agribusiness and commuter jobs in the nearby Waterloo-Cedar Falls metropolitan area.

Mr. Charlson, a 72-year-old retired trust officer for a local bank, has one guess about why the county has the voting record that it does. “We have a good mix of ag, local manufacturing businesses, and we have a lot of commuters to bigger cities,” he said. “It might just happen that we are kind of average.”

Write to John McCormick at mccormick.john@wsj.com and Ken Thomas at ken.thomas@wsj.com