At each rally, energy pulsates through a crowd that waited hours to stand and chant for a border wall, a drained swamp and

incarceration. They rejoice in the mention of every electoral vote as Mr. Trump recounts his victory, state by state.

Mr. Trump’s rallies played a central role to his first victory. With an existential threat to his presidency looming, they are in many ways more important than ever. Rallies let the president “cut through all of the noise” in Washington about impeachment and speak unfiltered to his supporters, said

“Rallies were always an integral, main part of the campaign strategy, but now it makes communicating with people directly that much more important,” he said. “It’s also important for the president’s supporters to see him out there fighting.”

The rally strategy represents a bet that preserving such a base-pleasing dynamic outweighs the need to provide a fresh message to skeptical voters. Keeping his core supporters motivated has become paramount as the impeachment inquiry adds a new challenge to his re-election hopes and ability to keep Republicans in line.

Trump rallies are more meticulously produced than the loose and thinly staffed events of four years ago. And while the events don’t earn nearly as much free media as in 2016—cable networks stopped airing them at full length months ago—the campaign has turned them into giant, roving field offices that vacuum up personal data from rallygoers, register new voters and sign up his most enthusiastic supporters as volunteers.

“are the driving force behind this movement.”

Mr. Trump’s rallies since the House opened its impeachment probe, which stemmed from a call between the president and his Ukrainian counterpart, reaffirmed his plan to rely on the divisive rhetoric that defined his 2016 bid.

He turned the son of former Vice President Joe Biden into a campaign prop in Minneapolis on Oct. 10. The next day in Louisiana, he said Sen. Bernie Sanders lost “a lot of bat-head speed” after the Vermont Democrat suffered a heart attack, and he said Democratic House Speaker

“hates the United States of America.” In Texas on Thursday, he described Democrats as crazy, corrupt and dumb.

At each stop, Mr. Trump cast the impeachment inquiry as part of a yearslong effort to harass him. Even new controversies have taken on an air of nostalgia. “They’re pursuing the insane impeachment witch hunt,” Mr. Trump told 20,000 people at the Target Center in Minneapolis. “I’ve been going through it now for more time than I’ve been in office.”

To Trump supporters waiting in lines at recent rallies, the Republican National Committee has distributed office phone numbers of Democratic congressmen along with scripts urging the lawmakers to “end this witch hunt,” support the president and demand the resignation of Rep. Adam Schiff, the California Democrat overseeing the House investigation.

The question for Mr. Trump is whether it will pay off to devote such a big portion of his schedule to such a narrow slice of the electorate.

“The trap that candidates from both parties are falling into is trying to please a small sliver in return for big applause and big crowds when they’re missing that 80% of America doesn’t agree with the far right or the far left,” said

Republican presidential campaign in 2016. “These kinds of rallies create the need to throw more red meat to the wolves.”

President Trump has held 78 campaign rallies since his Nov. 8, 2016 election. He frequently holds rallies in states he won, occasionally stopping in some that voted for Hillary Clinton. 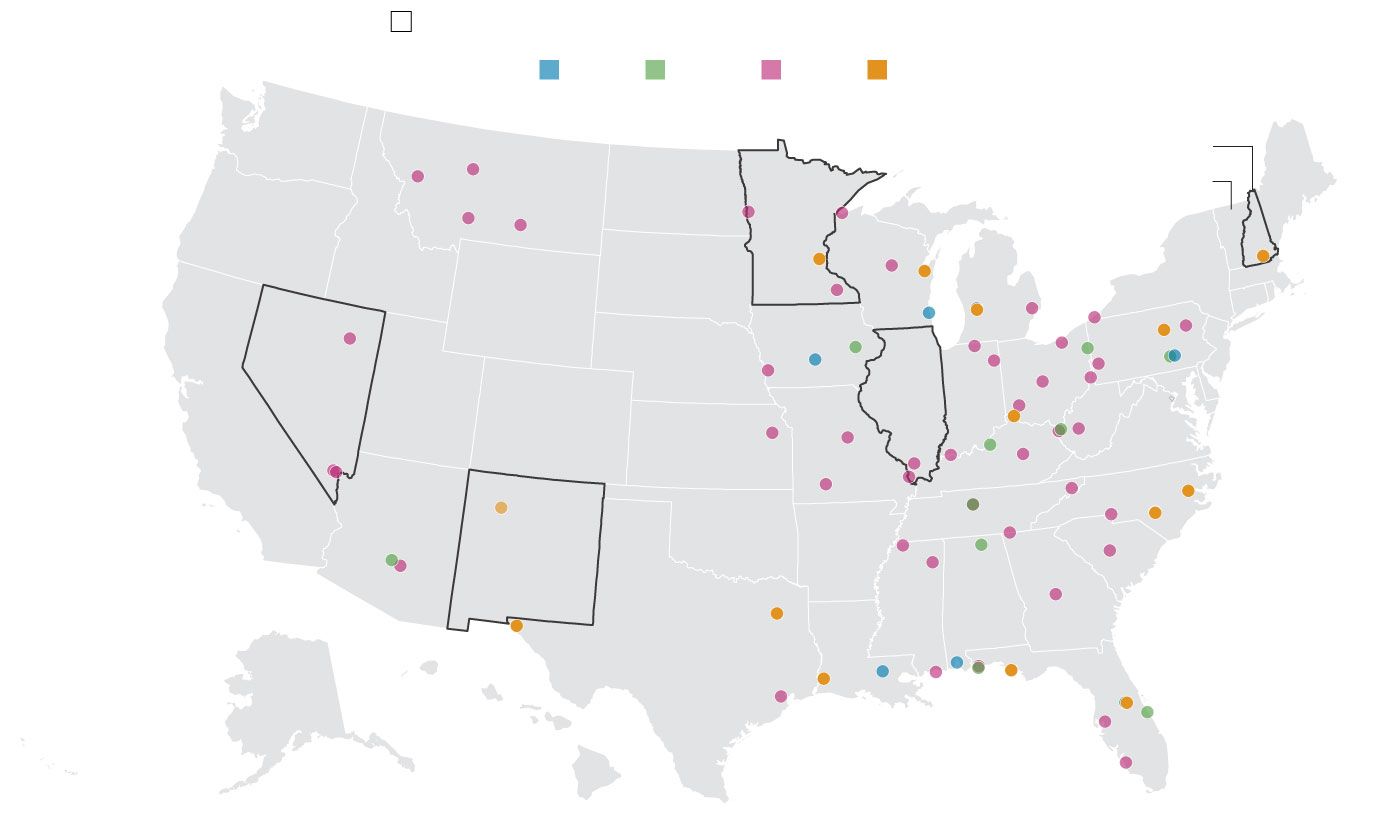 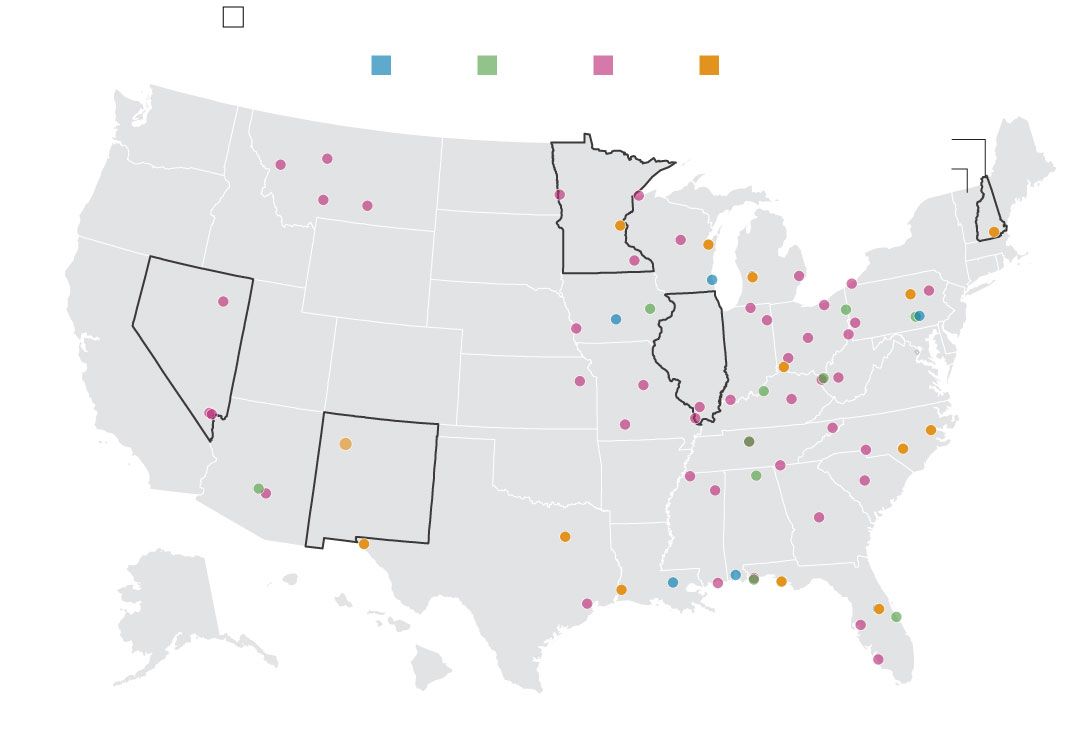 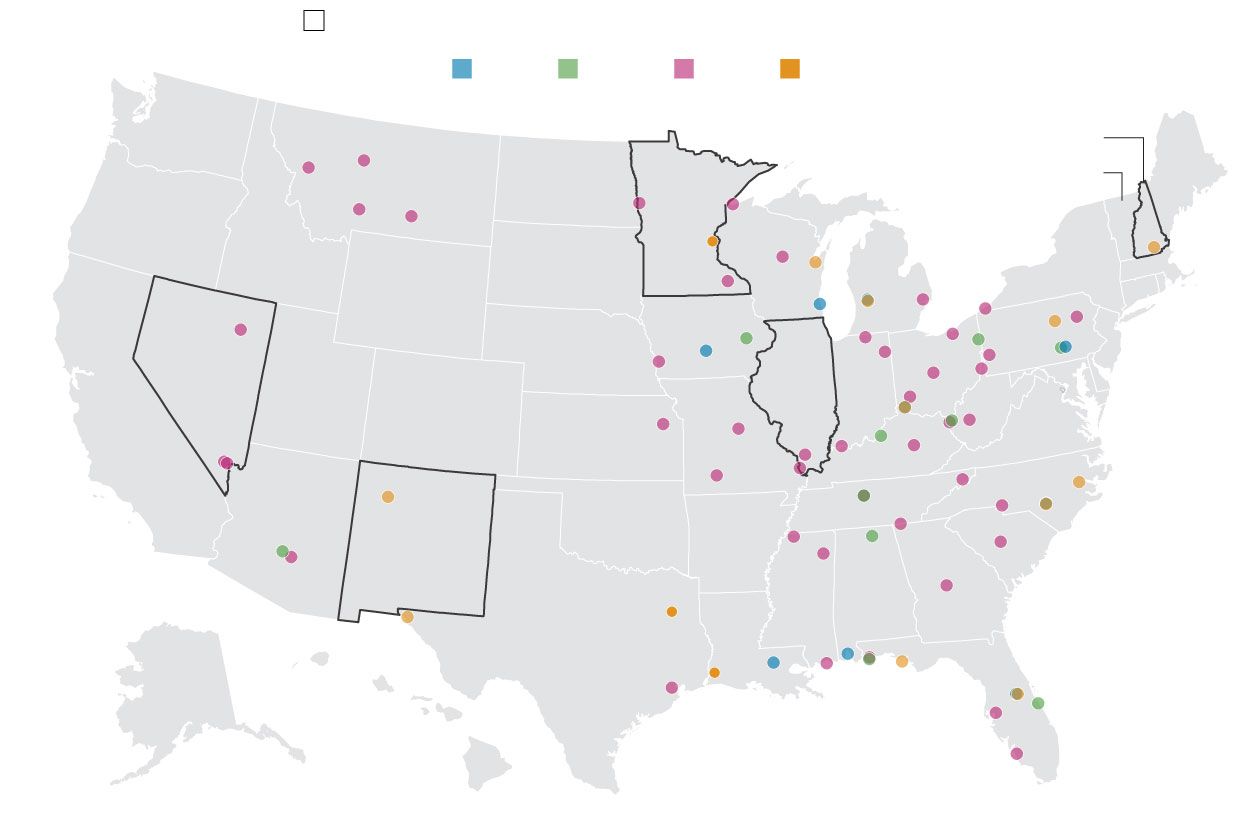 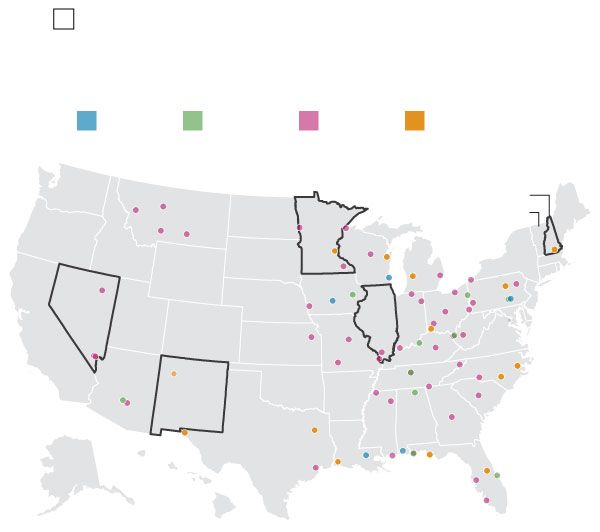 States Trump visited that voted for

Such tensions have unnerved Trump aides for years: Advisers in 2016 and 2017 discussed cutting back on rallies to avoid unforced errors but never seriously pursued such changes, said current and former White House officials.

Subtle attempts to polish Mr. Trump’s performances continue. Speechwriters try writing something new into the first 15 minutes of a speech, hoping he will stick to the script, said campaign officials and political advisers. That was the plan in North Carolina, when Mr. Trump unleashed a provocative attack on the liberal congresswomen known as “The Squad.”

It backfired when the audience responded by chanting “send her back,” a scene that threatened to alienate voters outside Mr. Trump’s core group, and the president has limited his complaints about the congresswomen in subsequent rallies.

For Mr. Trump’s ceremonial campaign kickoff in Orlando in June, aides trimmed one draft of the speech to about 45 minutes to keep the crowd’s attention, said people who viewed it. Mr. Trump made his own changes and spoke for about an hour and a half. Mr. Trump’s following eight rallies averaged more than 90 minutes, including the speech in Minnesota, which approached 105 minutes.

During private meetings with political advisers at his golf club in Bedminster, N.J., in August, Mr. Trump emphasized his preference to host more rallies during the coming campaign, said people familiar with the meetings. It will be the bulk of the campaigning he does.

The campaign plans to build out two separate advance teams, the political equivalent of concert roadies, assigned to build stages and secure the expensive HMI light systems typical of Hollywood movie sets, campaign officials said. Campaign aides expect a more frenetic schedule than in 2016, when Mr. Trump held multiple rallies a day during the final six weeks of the race. In the final six days of the 2016 campaign, he held 23.

The campaign has made both subtle and significant changes to rallies since 2015, including brighter lighting, louder sound systems and better arena mechanics. No one wants a repeat of the 2016 Pensacola, Fla., rally when a popping microphone triggered expletives from Mr. Trump.

As the former star of his own reality show, Mr. Trump pays close attention to production details. At one campaign meeting, he pushed for entertainment and food trucks for rallygoers queued outside arenas. Mr. Glassner, his de facto producer, is almost always the first to greet him at a rally.

Ahead of June’s Orlando rally, Mr. Trump pushed to bring cabinet members along, but acting chief of staff

rebuffed him, said people present during the conversation. Mr. Mulvaney cautioned the president about potential violations of the Hatch Act, which prohibits federal workers from participating in partisan activities.

“I’m in charge of the Hatch Act,” Mr. Trump told him in a room full of other top aides, adding that his top staffer was “weak” for making the suggestion. Mr. Trump later backed off the idea.

Will the Trump rally strategy work in 2020 as well as it did in 2016? Join the conversation below.

The most transformational change has been turning rallies into large-scale data-mining operations. The Trump campaign has collected millions of phone numbers, email addresses and other personal information supporters hand over when signing up for text alerts or registering for rally tickets.

The Trump team uses the data to reveal people’s political registrations and in which elections they have voted. Then the team cross-references that information with data on their consumer habits—already collected by the Republican Party—to forecast how likely each rallygoer is to vote in 2020 and which candidate the voter will probably support, campaign officials said.

A yet-to-be released smartphone app will offer supporters certain perks, such as accelerated entry into rallies, in exchange for putting the campaign in contact with friends who might back the president and hand over personal data.

the Trump campaign’s manager. “That’s 100,000 people I can send a text message to on Election Day.”

Mr. Trump’s team uploads data into a central database that will be used to recruit as many as two million volunteers, according to internal estimates, to continue to raise millions in small-dollar donations and to identify likely supporters and register them to vote.

America First Priorities, the super-PAC supporting Mr. Trump—it’s also targeting House Democrats with anti-impeachment ads—said it plans to register as many as 500,000 new voters in Florida, North Carolina and Pennsylvania using these data. By comparison, Mr. Trump won those three states in 2016 by a combined 330,000 votes.

Mr. Parscale discussed with political operatives the possibility of using facial recognition at rallies to help analyze reactions from supporters, but was told by at least one company that the technology wasn’t reliable yet, according to people familiar with the conversations. A campaign spokesman said Mr. Parscale never pursued the technology.

Campaign officials generally consider the first Trump rally to be his July 2015 Phoenix Convention Center speech. The campaign rented a small hotel reception room, moved to a larger ballroom and ultimately filled the 4,200-person convention-center room. In August 2015, an estimated 30,000 attended a rally in Mobile, Ala., the high-water mark for attendance.

With a shoestring staff and budget, the campaign had little idea who was attending. It started diligently collecting phone numbers in March 2016, not to store useful data but to discourage protesters—the start of a database now including more than 35 million numbers.

“In polling there is a difference between agreement, which is a party-line vote, and intensity, when voters walk through broken glass to vote for someone,” said Kellyanne Conway, the president’s White House counselor and former campaign manager. “The Trump rallies were a telling political measurement of passion and commitment. You just had to look at the rallies and realize that he had an intensity advantage.”

Behind the scenes, those close to Mr. Trump said, the president is most concerned about keeping seats filled, hearing himself on stage and making sure the crowds are taken care of. Constantly driving past long lines of supporters waiting to get inside rallies during the midterm elections, he told aides to do a better job tending to people while they waited.

of Massachusetts attracted 15,000 to a Seattle rally on Aug. 25, and about 20,000 to a rally in New York on Sept. 16. That was the largest of Ms. Warren’s campaign, and similar in size to what was previously the only recent Democratic presidential campaign event to attract 20,000 people: California

Democrats have long collected data on their events’ attendees, said David Bergstein, the Democratic National Committee’s director of battleground-state communications, adding that the party is “taking nothing for granted.”

The DNC has improved the accuracy of its available data on voters, expanded its reach with new agreements to share information with state parties and increased the size of its technology team with the addition of senior staff with ties to

and Yahoo, he said. “The real significance of Trump’s rallies,” he said, “is that they are repelling the independent voters who will decide the election across the battleground states.”

The Trump campaign isn’t worried that cable networks don’t cover his rallies live anymore, said campaign officials. The rallies tend to become statewide media events, drawing local reporters and camera crews within a drivable distance of cities like Grand Rapids, Mich., or Green Bay, Wis., to report on thousands who show up to see the president, including many who camp outside the arena a day or two in advance.

The most recent rallies have been populated by supporters eager to show they still back the president despite the House investigation. Randal Thom, who has attended more than 50 Trump rallies, said the crowd at the Minneapolis event was among the loudest he has heard—because of impeachment talk.

“It’s emboldened us, and made us stronger and more willing to be louder and stand up stronger,” said Mr. Thom, 59, who raises Alaskan malamutes in Lakefield, Minn. “An attack on him is an attack on us.”

—Catherine Lucey contributed to this article.

All About the Money: Why Hong Kong Matters So Much to China
Neumann to Get Up to $1.7 Billion to Exit WeWork as SoftBank Takes Control