PETALUMA, Calif.—California’s governor declared a state of emergency as a wildfire north of San Francisco burned nearly uncontrolled and millions of people were left without power as utilities tried to prevent more fires amid raging winds.

“We are deploying every resource available, and are coordinating with numerous agencies as we continue to respond to these fires,”

a Democrat, said in his declaration.

Firefighters confronted ferocious winds, with at least one gust clocking in at 102 miles an hour shortly after sunrise Sunday in the hills above the evacuated Sonoma County wine town of Healdsburg, according to the National Weather Service.

Some 180,000 people were ordered to evacuate the area near the Kincade Fire, the largest of eight wildfires currently blazing in the state, according to officials in Sonoma County, north of San Francisco.

The Kincade Fire was about 10% contained by more than 3,000 firefighters who have been deployed, and it was advancing south and west, according to the California Department of Forestry and Fire Protection, or Cal Fire.

Wide swaths of California were without power as the state battled several major fires amid high winds. 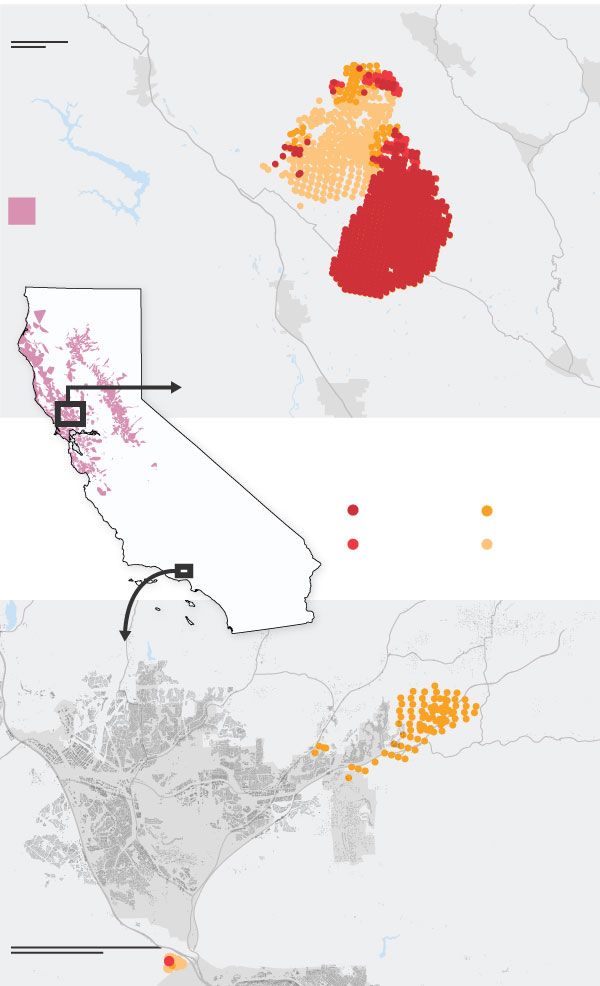 Officials said at a news conference Sunday that they expect current conditions, which include high winds and low humidity that can lead to the rapid spread of fire, to persist for days.

“We know we are not out of the woods, and the wind conditions that were ferocious continue today,” said County of Sonoma Supervisor David Rabbitt.

There were no reports of deaths or major injuries.

In what has become a new routine in the state, PG&E Corp., the bankrupt utility whose equipment has been cited as a cause in numerous past fires, said it cut off power to 940,000 homes and businesses—or an estimated 2.4 million people—in dozens of counties from the far northern part of the state to the mountains at the end of the Central Valley.

That surpasses the shut-offs to 750,000 customers earlier this month that drew widespread criticism of PG&E.

“We recognize the hardship of not having power. We are working hard with all our partners to ensure the most vulnerable customers are being cared for,” said Andrew M. Vesey, chief executive officer and president of Pacific Gas and Electric Co., the main subsidiary of PG&E, during a news conference Saturday night.

The Tick Canyon Fire, which raged earlier in the week in Los Angeles County, was largely contained Sunday. At its peak, as many as 50,000 people were ordered evacuated. That fire has consumed about 4,600 acres and destroyed 22 structures, according to the Los Angeles County Fire Department.

Meanwhile in Northern California, traffic on U.S. Highway 101 in Sonoma County was at a near standstill Sunday morning as cars headed south from the evacuation zones.

At an evacuation shelter in Petaluma, Lara O’Brien recounted how she and about 14 friends from Ireland fled in a caravan of seven cars after attending a wedding in the resort town of Monte Rio on Saturday.

“First the caterer canceled, then the bartender, and then the power went out,” Ms. O’Brien, a 50-year-old freelance writer, said as she clutched pillows and blankets at the Petaluma Community Center. “We sat and sang for a while, which is what we do.”But once evacuation sirens started blaring at about midnight, she said she and the entourage decided to make their escape down dark, winding roads—ending up at the evacuation shelter they found on Google. “It was really comfortable,” said Chuck Robinson, 58, as the group prepared to go to Lake Tahoe to continue their vacation. “Best eggs I have had in a long time.“

Linda Seipp of Santa Rosa lived through the Tubbs Fire in 2017, and she said the smell of smoke and sound of howling winds was reminiscent of that night when the fire devastated large parts of the city north of her home. She decided to evacuate, with her son, 16, daughter, 27, a nine-month-old grandson and a dog named Romeo at about midnight Saturday. She said her evacuation was hampered by dark streets and some blocked roads.

“It was like scary, panicky—you’re worried about your family,“ Ms. Seipp said Sunday at the Petaluma Community Center shelter.

But many people chose to ignore evacuation orders. Alice Plichcik, who lost a home she shared in Santa Rosa with her sister, Susan Plichcik, during the Tubbs Fire said they chose to wait out the fire threat at their new home in a rural area a few miles west of where the Kincade Fire started Wednesday.

“We are not leaving,” Alice Plichcik said Sunday morning, as their home remained untouched by the fire, which stayed to the east overnight. “We will fight this fire even if it means I’m not above ground anymore.” She said that she was suffering from post-traumatic stress syndrome, like many others who lived through the 2017 firestorm.

“It’s terrible,” she said. “We’re not even done with insurance from the last fire yet.”

Petaluma police said the three designated evacuation shelters in the city had all been filled to capacity by midmorning Sunday, and new ones were opening in area churches and nearby cities as people continued to stream into the area from the fire zone.

But Mr. Hawkins said the evacuation is more controlled than it was in 2017, when residents in many cases rushed from homes as flames approached dangerously close. “It’s a lot more organized this time,“ Mr. Hawkins said. “In 2017, it was chaos.“

Drew Halter, supervisor of the Petaluma Community Center shelter, said the facility filled to a capacity of 350 people by 6 a.m. Sunday after hosting 150 evacuees as of midnight Saturday. He said a wedding that had been booked in the community center with 250 attendees had to be canceled to make room for the fleeing residents. “It was a tough call, but we had to do it,“ Mr. Halter said.

But he likewise said the process of setting up emergency shelters has run far more smoothly than it did in 2017, when he said the city opened up the same center for Tubbs Fire evacuees and had no food or other basic provisions immediately available. This time, he said, donations including from local restaurants were so lavish that evacuees Saturday dined on short ribs and chocolate covered strawberries.

Fire evacuations, he added, have become surprisingly routine. “Unfortunately, this has become a new normal for us,” Mr. Halter said.

Brookdale Senior Living, which owns and manages about 800 senior housing communities throughout the U.S., on Saturday and Sunday evacuated about 200 residents from three communities in Santa Rosa and Windsor. Most of the residents were taken by bus to five other Brookdale communities.

A group of independent-living residents, those not requiring medical care, are being temporarily housed in a hotel. “It’s a very fluid situation,” said

Brookdale’s chief executive, adding that it is complicated by the need to keep patients on their medications and meet their dietary restrictions.

Shelters were also being opened to accommodate the flood of dogs, cats and other animals arriving from the fire zone. On the parking lot of the Petaluma Community Center, volunteers and staff of Countryside Rescue tended to 103 dogs and cats that were shipped in after the facility’s headquarters in Santa Rosa was ordered evacuated. Many of the dogs whined and barked from cages set out on the grass, awaiting turns to be walked by handlers. David Weiss, operator of the rescue nonprofit, said he had to evacuate animals in 2017 also.

—Alicia Caldwell and Peter Grant contributed to this article.

Cancel reply
Twilight of the Stock Pickers: Hedge Fund Kings Face a Reckoning
When a CEO’s Personal Life Should Be Made Public