BUTEMBO, Democratic Republic of Congo—The Ebola virus kills in terrifying ways, shutting down the body’s organs and draining victims of the fluids that keep them alive. In outbreaks, it has claimed as many as 9 in 10 patients.

In a medical breakthrough that compares to the use of penicillin for war wounds, two new drugs are saving lives from the virus and helping uncover tools against other deadly infectious diseases. They were proven effective in a gold-standard clinical trial conducted by an international coalition of doctors and researchers in the middle of armed violence.

The work of Congolese virologist

yielded one of the new Ebola drugs. Dr. Muyembe had dedicated years to finding how to save people from the disease that emerged in 1976 from a remote village near the Ebola River. He was among the first scientists to identify the Ebola virus, which has killed an estimated 3,000 men, women and children in his country and threatened many more around the world.

The virus, once thought isolated to remote areas of central and eastern Africa, proved it could jump oceans. In 2014, international travelers spread Ebola to cities in the U.S. and Europe, including Dallas and Madrid.

Who should be responsible for combating global epidemics? Join the conversation below.

Researchers tested four experimental drugs, and two were most effective. The treatments are remarkable for their potential to save lives, as well as for the way they came about.

The trial was conducted at four Ebola treatment centers, essentially tent-sided field hospitals, scattered across a violent swath of northeastern Congo during the world’s second-largest outbreak of the disease. In addition to the threat from the contagious virus, researchers dodged attacks by warring local groups. Two of the treatment centers were set on fire.

“Ebola is now a disease we can treat,” said Dr. Muyembe, director-general of Congo’s National Institute of Biomedical Research, known as the INRB, and a co-principal investigator in the trial.

Preliminary results were released on Aug. 12, days after the trial ended. Final results are expected to be published soon in a medical journal.

Beyond Ebola, the new drugs open a pathway for antibody-based treatments for other infectious diseases, said

director of the National Institute of Allergy and Infectious Diseases, which ran the trial with the INRB and a research group coordinated by the World Health Organization.

Dr. Muyembe had long believed that antibodies—proteins that the immune system produces to fight infection—could bolster patients’ defenses against Ebola. He faced doubts from scientists skeptical about drawing conclusions from his research.

In the trial, patients given a single-antibody drug had a 35% mortality rate, according to results presented at an infectious-diseases conference this month in Washington, D.C., compared with as high as 90% without treatment. The NIAID-led drug, mAb114, was developed from an antibody of an Ebola survivor found by Dr. Muyembe.

Among patients treated with a drug made of three antibodies by

Many Ebola patients don’t seek medical treatment or come too late to be helped. As a result, of 3,250 cases of Ebola since August 2018, 2,174 have died, yielding a 67% mortality rate. A new vaccine given to more than 240,000 people in northeastern Congo helped prevent further spread of the virus.

Regeneron and Ridgeback Biotherapeutics LP, a Miami biotech company that licensed the NIAID drug, said they each planned to seek approval from the U.S. Food and Drug Administration under a speedy review process for breakthrough drugs.

The Congolese have suffered through a 15-monthlong epidemic that the WHO designated a global public-health emergency. While new cases have declined in past weeks, the virus has surfaced in hard-to-reach rural areas where violence by rebel militias impedes health workers.

Since the clinical trial ended, doctors have been administering the two drugs to Ebola patients, while researchers continue to study their effects.

“The people who come early, the vast majority of them get better with these drugs,” said Muhindo Karumba, who showed Dr. Fauci and other visiting U.S. officials an Ebola treatment center last month in Butembo, a dense mountain city crisscrossed with red-dirt roads near Congo’s border with Uganda.

During the visit, Dr. Karumba introduced a 9-year-old boy treated with one of the drugs. The boy carried a certificate declaring he was free of Ebola.

In a pediatric ward, a woman cradled a 3-week-old baby boy who was treated as a precaution. His mother died of Ebola two hours after he was born.

Congolese research teams, joined by those from other countries, collected and scanned patient data at plastic tables in the tent buildings of the treatment centers, a world away from the gleaming research hospitals where clinical trials are generally run.

led a research team with the Alliance for International Medical Action, or ALIMA, at an Ebola treatment center in Beni, a city that became an epicenter of the current epidemic.

“It was not easy,” said Dr. Sivahera, who is originally from Congo.

The first trial patients enrolled last year in November. Researchers thought it would take more than one outbreak to get enough patients, but the virus kept spreading.

“We had no idea the outbreak was going to be as devastating as it turned out to be,” said

deputy clinical director at the NIAID and co-principal investigator.

The drugs in the randomized controlled trial, considered in science the most reliable, were shipped each week aboard United Nations flights from Kinshasa to Beni. The shipments were usually delivered to the treatment centers in convoys. Sometimes, there were maddening delays. “You were always keeping your fingers crossed,” said

director of the NIAID’s Office of Clinical Research Policy and Regulatory Operations.

The drugs had to be kept in refrigerators or freezers that relied on generators for electricity. The staff monitored temperatures to make sure the drugs stayed cold. Workers sent patient data each day to Kinshasa via satellite dishes. The information was then relayed to the NIAID in Bethesda, Md. 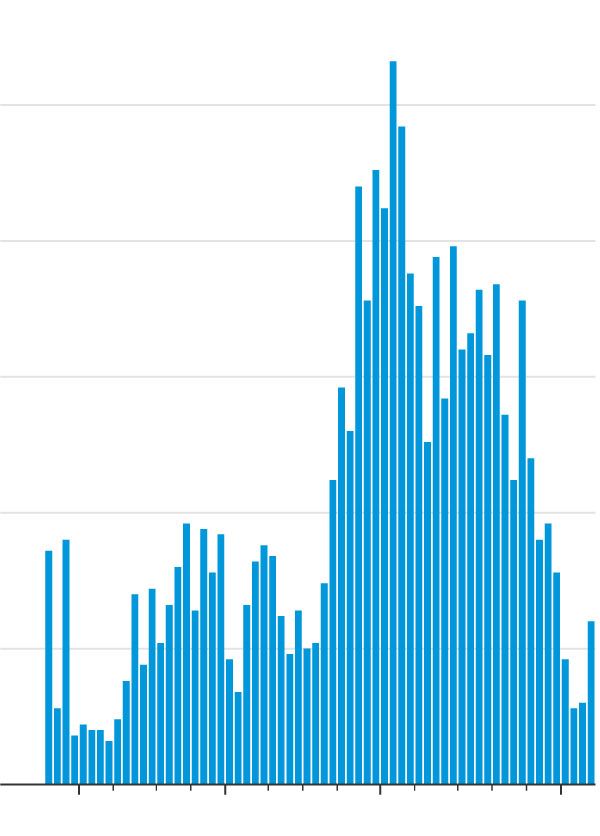 Many people sick with Ebola stayed away from the treatment centers, some of them suspecting that health care workers were part of a plot to harm them. Others demanded help for more common diseases, such as measles.

Even some people who sought help were at first suspicious of the Ebola drugs, said

a research coordinator with International Medical Corps, a nonprofit organization which ran the trial at one site. Most who arrived, though, agreed to the treatment, he said.

In late December, an Ebola testing center in Beni was ransacked by protesters angry over the government postponing local voting in the presidential election because of the Ebola outbreak.

Researchers at a nearby Ebola treatment center, where Dr. Sivahera worked, had to evacuate. A staffer phoned

the head of the NIAID’s trial team in Kinshasa, asking if they should try to save patient records. “I said, “Don’t worry about the files, just leave everything and save your skin!” Dr. Aboulhab recalled. Staffers stuffed their backpacks full of papers anyway.

In February, attackers burned the Ebola treatment center in the town of Katwa, setting fire to the office housing the clinical trial. Refrigerators, freezers, drugs and copies of patient records were lost. All but that day’s trial data, however, had been uploaded to Kinshasa.

Three days later, the nearby Butembo treatment center was attacked by armed assailants. It took until April to restart the trial there, and until June to resume it at the treatment center in Katwa.

In August, an independent group of experts reviewed the results. It found that REGN-EB3 and mAb114 outperformed the other two drugs in the trial with startling outcomes. Researchers stopped the trial on Aug. 9.

The following day, doctors began giving patients one of the two successful drugs. “People say it’s unprecedented that you have this great result,” Dr. Fauci said. “What is equally as unprecedented is the conditions under which it was done.”

Dr. Muyembe set out on his path to an Ebola treatment during the 1995 outbreak. He transferred blood from five survivors to eight patients, hoping that the antibodies that kept some people alive would keep others from dying. Seven of the patients who received the blood transfusion recovered.

He published the results in a scientific journal in 1999. Other researchers said the study was small and had failed to include a control group, a comparison set of patients who weren’t given the treatment, to fully test its efficacy.

who had come to see Dr. Muyembe about collaborating on monkey pox and HIV vaccine research. Their conversation turned to Ebola, and Dr. Muyembe suggested the NIAID study antibodies from one of the Ebola survivors who had donated blood. 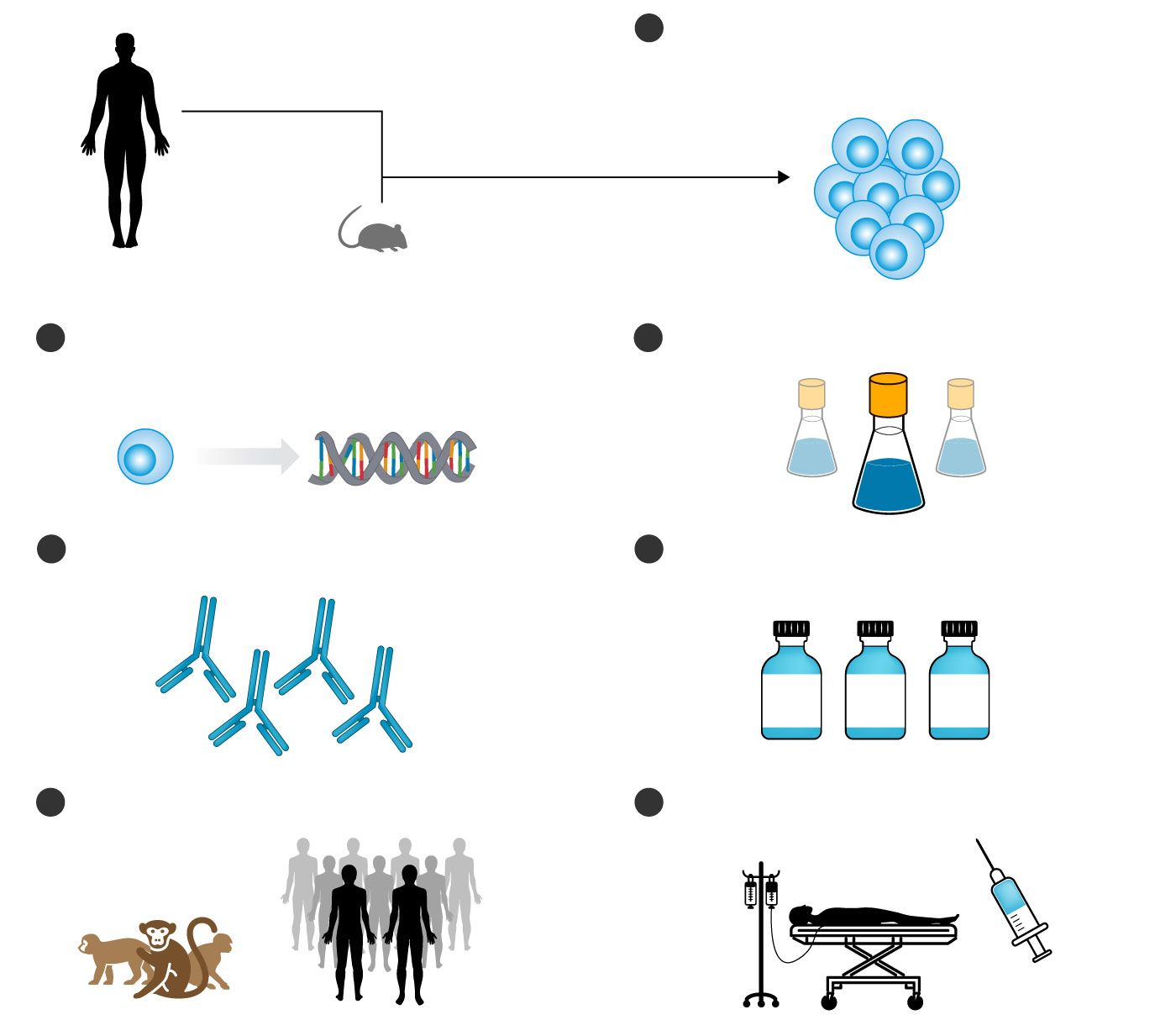 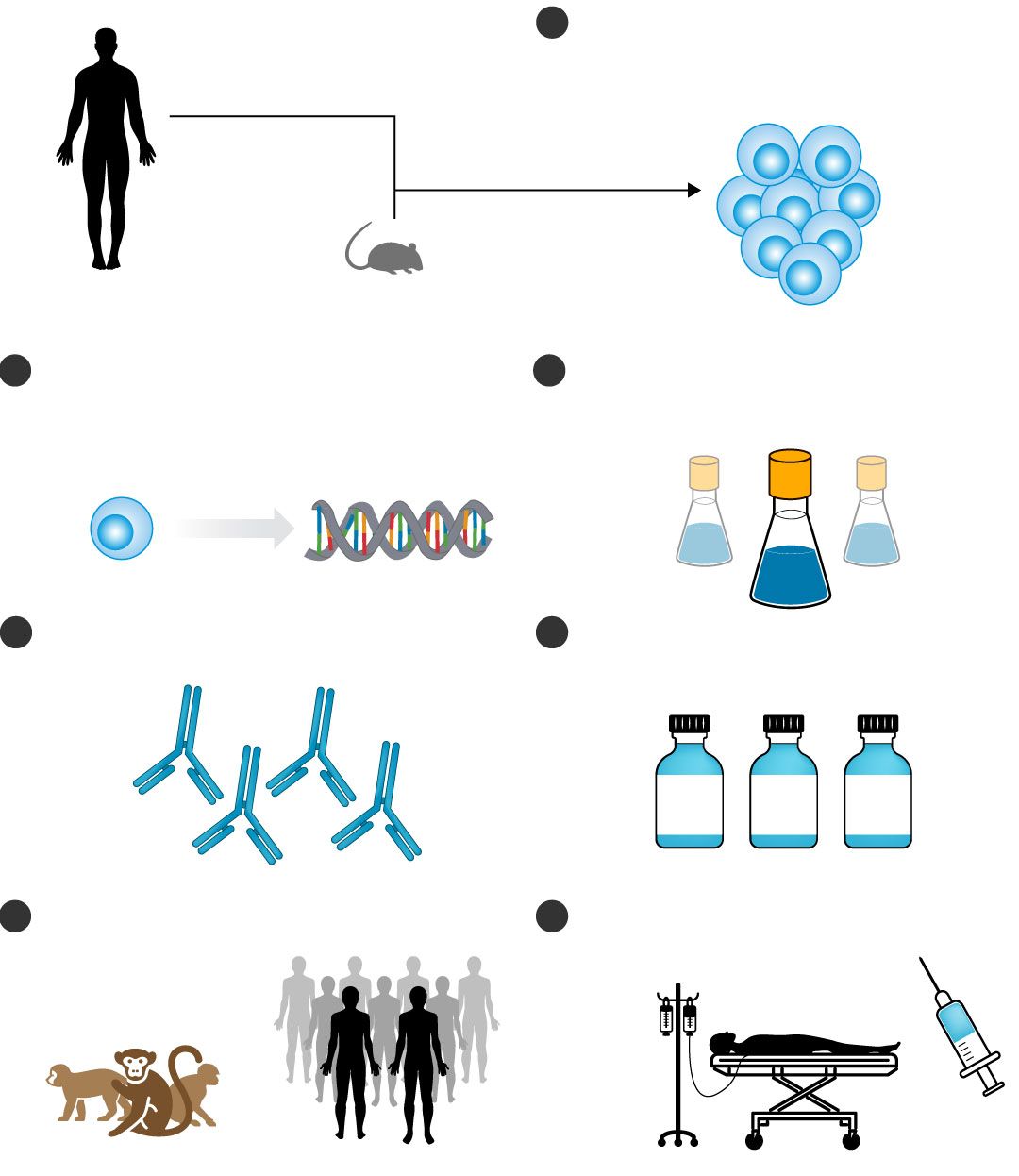 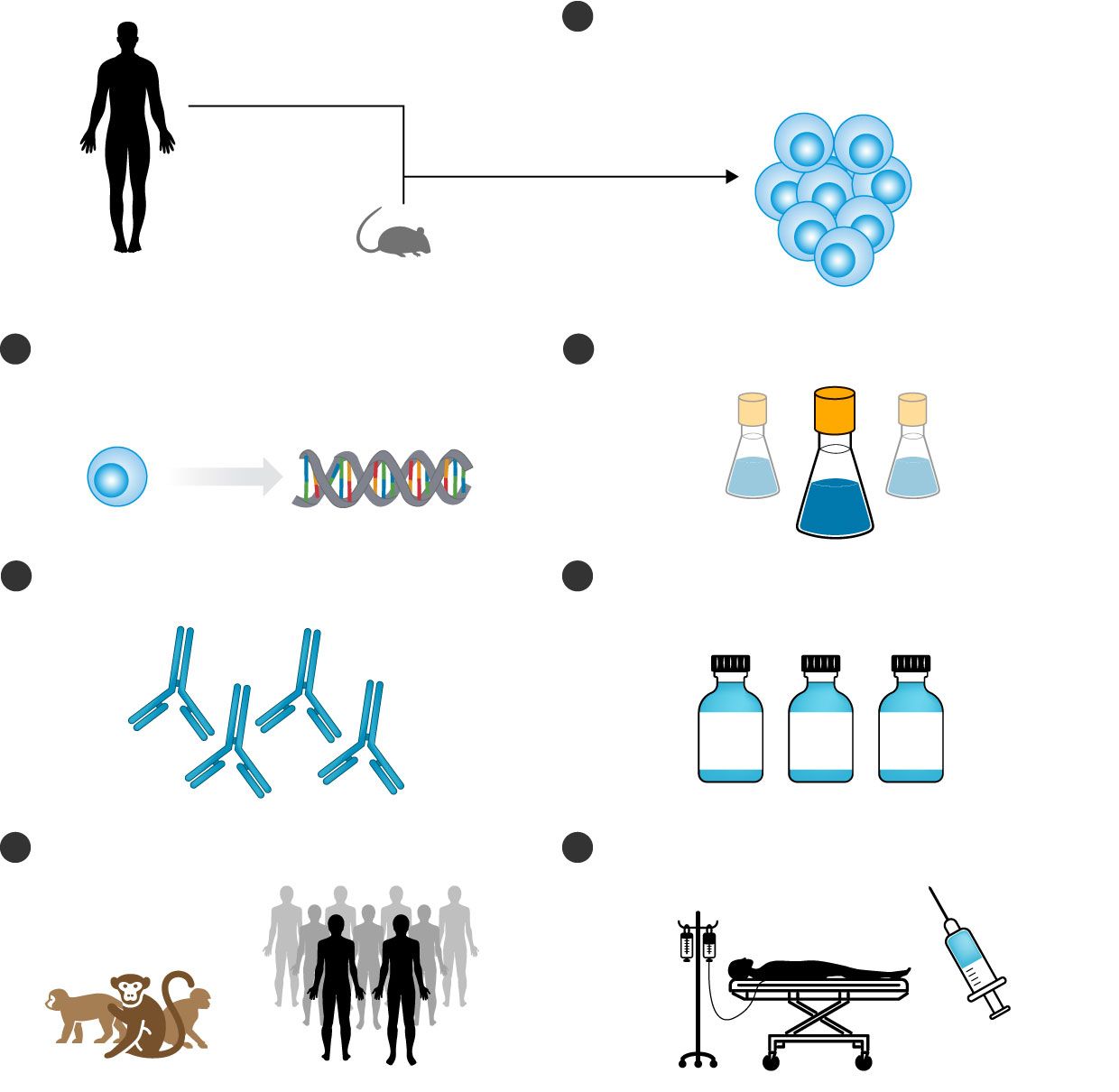 lost 15 members of his family to Ebola in the 1995 outbreak. He and his family members were infected caring for a brother who was a hospital technician and had contracted the illness at work.

As family members died one by one, Mr. Mubiala developed a fever and grew weak. “I had a feeling that I will die soon,” said Mr. Mubiala. Only he and a sister lived.

After recovering, he donated his blood to Dr. Muyembe for the study, and, assuming he was immune to Ebola, spent the next months caring for others with the disease. Scientists suspected Mr. Mubiala had potent antibodies because he had been severely ill, then recovered and was likely exposed again to the virus as he helped Ebola patients.

In late 2006, Mr. Mubiala traveled to the NIAID’s Vaccine Research Center in Bethesda, Md., and gave blood samples. One of Dr. Muyembe’s researchers worked with scientists there over several years to identify antibodies from Mr. Mubiala that disabled the virus. From one, they developed mAb114.

Regeneron, a Tarrytown, N.Y.-based company, started developing an Ebola drug in October 2014. Years earlier, the company had developed a technology to create treatments against viruses using human antibodies produced in a genetically-modified mouse. It identified three antibodies to attack the Ebola virus and created REGN-EB3.

In May 2018, an Ebola outbreak erupted in a western province of Congo. Eager to test their drugs, Regeneron and the NIAID sought permission to supply their experimental treatments. The outbreak ended first.

But a few weeks later, the current outbreak began. Sabue Mulangu, a researcher at the INRB and the trial coordinator in Congo, helped secure permission from the NIAID and the Congolese government to give patients mAb114.

They offered treatment at a hospital in the town of Mangina where several nurses were sick with Ebola. It had been tested on only a few people. “People were not very confident that it was a good idea,” Dr. Mulangu said. “We said, OK, Ebola kills. We have to do something.”

The nurses agreed to the hourlong infusions. The first patient vomited and had diarrhea for two days. On the third day, she improved.

By the fourth day, “she was putting on makeup,” Dr. Mulangu said.

All 13 patients in Mangina survived. Doctors soon began administering mAb114, REGN-EB3 and other experimental drugs. They were given to patients under WHO guidelines allowing experimental therapeutics during deadly outbreaks.

Researchers moved quickly to design the clinical trial that confirmed what Dr. Muyembe first suspected—that antibodies from those who survived the virus held the key to saving others.

Mr. Mubiala, 52 years old, whose antibodies opened the door to a treatment after losing nearly all his family to Ebola, now has a wife and three children.

“When I heard there now a cure from my blood,” he said, “I was very, very happy.”

Write to Betsy McKay at betsy.mckay@wsj.com