Ranking the best players in college basketball is a fun but immensely challenging task.

What is the criteria? What matters more: stats or winning? How can you possibly rank incoming freshmen who haven’t played a game? And doesn’t a list like this overlook the crucial glue guys who don’t make highlight reels or generate double-doubles, but are instrumental to the team’s success?

So I take a four-pronged approach when putting together my rankings.

1) Stats certainly matter, but all stats are not created equally. Huge numbers on a single-digit win team mean what, exactly?

2) Projecting how 18-year olds will perform in college and then, perhaps, the NBA is even more challenging. Yes, it involves a lot of research into high school and prep school basketball.

3) The most difficult category is “value to their team,” something that is wholly unquantifiable, especially for post players, because college basketball is dominated by guards.

4) Finally, a subjective question: If I’m starting a team, is this a guy you can build around?

Taking all that into account, here are your 50 best basketball players for the 2019-2020 season.

50. Filip Petrusev, Sophomore, C, Gonzaga: The Zags lost their top four scorers, and their returning player to watch is Petrusev, a seldom-used forward who only played 11.4 minutes per game last year.

49. Nathan Hoover, Senior, G, Wofford: The Terriers lost their top two scorers from a year ago, when they threw a scare into Kentucky in the NCAA Tournament, but Hoover (13.6 PPG on 45/46/90 shooting) will lead Wofford back to March Madness.

48. Antoine Davis, Sophomore, G, Detroit: One of the best mid-major scorers in college basketball, Davis put up 26.1 points per game. 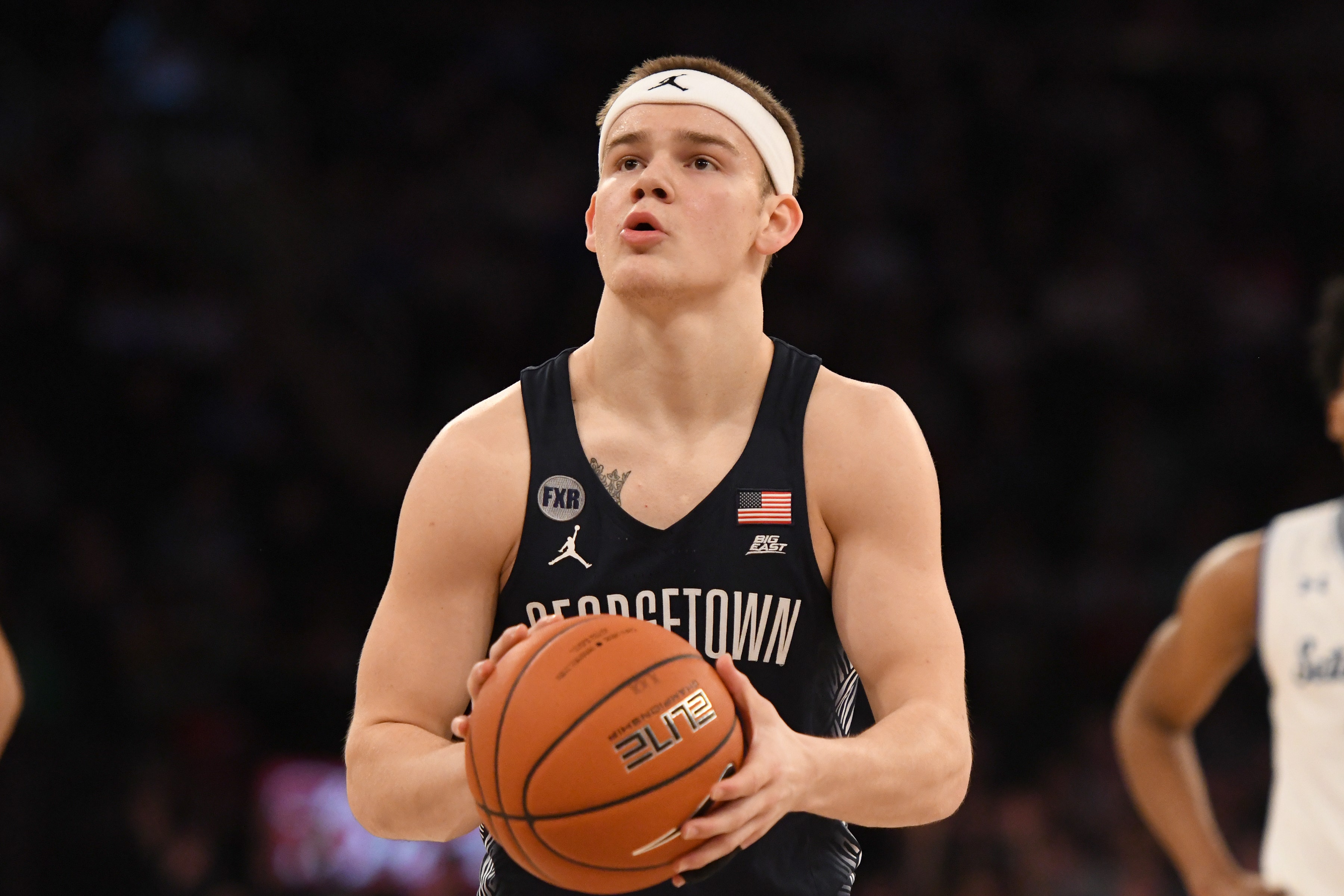 46. Jayden Gardner, Sophomore, F, East Carolina: Surprised a lot of opponents with his power game last year, scoring 16.3 PPG and grabbing 8.5 rebounds per game, including 10 double-doubles, the most impressive one being 35 points and 20 rebounds vs. Tacko Fall and UCF.

42. Bryce Aiken, Senior, PG, Harvard: A candidate to be the Ivy League Player of the Year, Aiken averaged 22.2 PPG and shot 39.8 percent on 3-pointers.

41. Precious Achiuwa, Freshman, F, Memphis: Highly-touted wing from Nigeria is projected as an NBA lottery pick because of his ability to do it all at 6’9″: run the offense, hit 3-pointers, win in the post, and dunk over anyone.

40. Andrew Nembhard, Sophomore, G, Florida: Tested the NBA waters, but his return to Gainesville has fans dreaming of a Final 4 season if the Canadian guard is able to build on the 4th best assist total in school history (196).

39. Nico Mannion, Freshman, PG, Arizona: Heralded newcomer is such a good distributor and scorer, the Wildcats should get back to the NCAA Tournament after a rare miss in 2019.

38. Matt Haarms, Junior, C, Purdue: The 7’3″ center who is Dolph Lundgren’s doppelgänger blocked 2.1 shots per game for the Boilermakers, while adding 9.4 PPG in just 22.9 minutes per game. 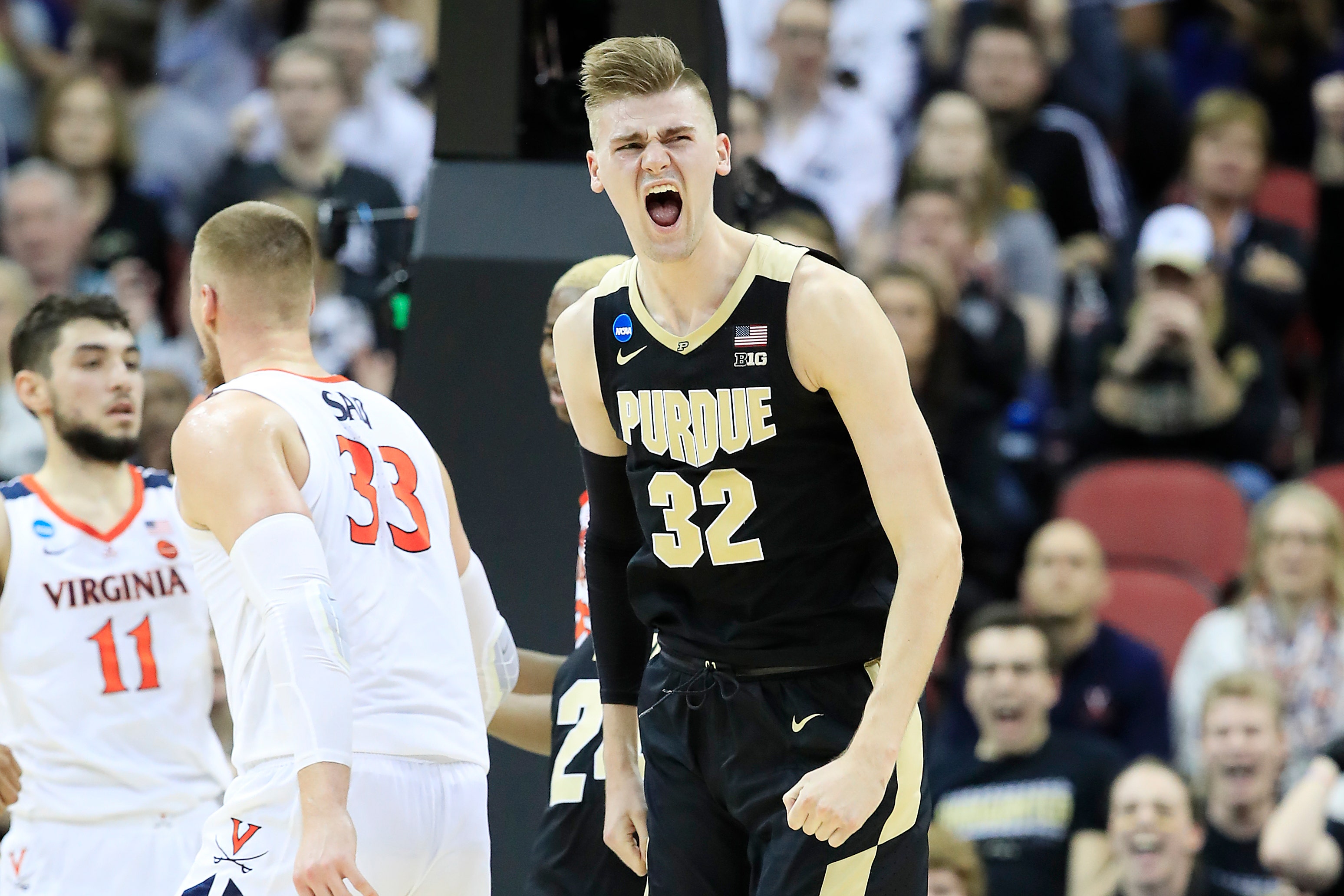 37. Mamadi Diakite, Senior, PF, Virginia: Best known as the guy who beat the buzzer to force overtime against Purdue in an epic NCAA Tournament win, Diakite is the Cavs’ best returning player and should double his junior stats of 7.4 PPG and 4.4 RPG.

36. Tyrese Haliburton, Sophomore, G, Iowa State: A monster summer playing for Team USA has Ames excited about the 6’5″ guard who shot 43 percent on 3-pointers as a freshman.

35. Nick Muszynski, Sophomore, C, Belmont: Put up 14.7 PPG and 2.2 blocks per game for a Bruins team that nearly upset Maryland in the NCAA Tournament.

34. Ashton Hagans, Sophomore, PG, Kentucky: Modest stats last year (7.7 PPG and 4.3 APG), but he was playing alongside three players who matriculated to the NBA.

31. Joshua Langford, Senior, G, Michigan State: A foot injury in December of 2018 limited his junior season to 13 games when he was second on the Spartans in scoring, at 15 PPG. He’s expected to join the Spartans in January, just in time for conference play.

30. Jalen Smith, Sophomore, F, Maryland: Averaged 11.7 PPG and 6.8 RPG last year in only 26.5 minutes as night playing alongside current NBA player Bruno Fernando, but now the interior in College Park is all his.

29. Devon Dotson, Sophomore, PG, Kansas: Speedy point guard was only the team’s 4th leading scorer as a freshman (12.3 PPG), but look for him to make a leap, especially if he improves on his 36% 3FG.

28. Jon Axel Gudmundsson, Senior, G, Davidson: Captured the Atlantic 10 Player of the Year award on the strength of 16.9 PPG and 7.3 RPG.

27. Cassius Stanley, Freshman, SG, Duke: The big 6’6″ guard who is projected as an NBA lottery pick next June could start the season as the sixth man, but that won’t last long because he’s probably the most complete offensive player the Blue Devils have. 26. Jaden McDaniels, Freshman, F, Washington: The Huskies recruiting class is clearly stacked, and the springy McDaniels figures to be a high-impact addition if he is indeed a one-and-done.

23. Alpha Diallo, Senior, G, Providence: A Big East Player of the Year candidate, the big guard put up 16.0 ppg and 8.1 rpg a game last year for the Friars.

21. Scottie Lewis, Freshman, SG, Florida: A consensus Top 10 recruit is considered a lockdown defender, and if his offensive game blossoms, the lottery pick projections for 2020 will become very real.

18. Anthony Lamb, Senior, F, Vermont: Undersized power forward (6’6″) is the best player in the AEC, averaging 21.2 PPG, and will make the Catamounts a sleeper to pull an upset in March. 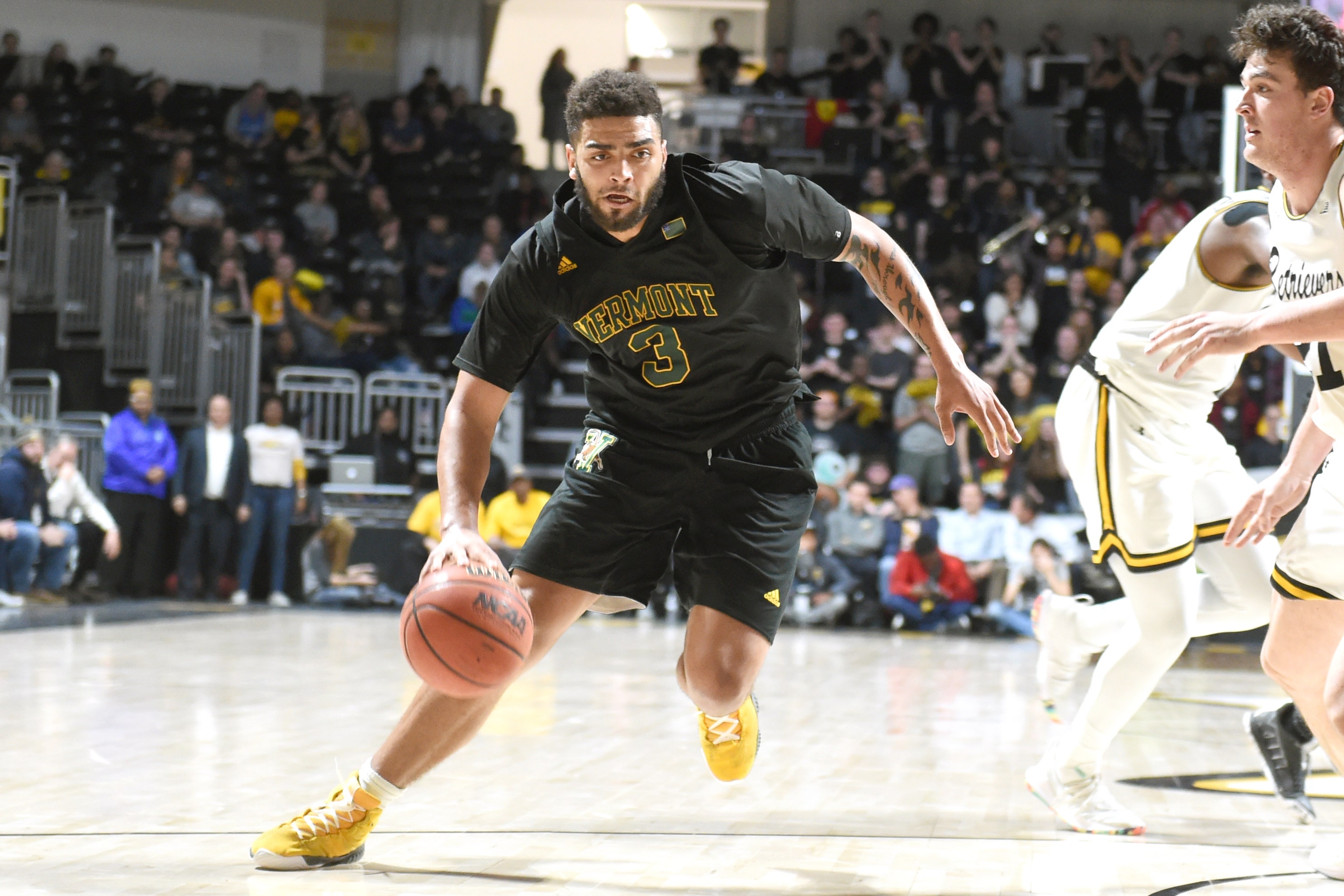 17. Kellan Grady, Junior, G, Davidson: A knee injury slowed his sophomore year, but he still averaged 17.3 PPG, and Grady is the A-10 preseason player of the year.

16. Lamar Stevens, Senior, SF, Penn State: Bullish forward averaged 19.9 PPG and 7.7 RPG as a junior, and he’s the returning leader in the Big Ten in both categories.

14. Tre Jones, Sophomore, PG, Duke: Took a backseat to Zion Williamson and RJ Barrett last year, but expect Jones to emerge as one of the best point guards in the country, though he must improve on his 26% 3-point shooting.

13. Sam Merrill, Senior, G, Utah State: One of the best guards nobody talks about, Merrill shot 52/36/90, averaged 20.9 PPG, and is the reigning Mountain West Player of the Year.

12. Isaiah Stewart, Freshman, F, Washington: The 6’9″, 230-pound center is limited offensively, but he’s going to dominate the interior of the 2-3 zone for the Huskies.

11. Jordan Nwora, Sophomore, F, Louisville: ACC preseason Player of the Year averaged 17.0 PPG and 7.6 RPG for the Cardinals as a sophomore.

9. Ayo Dosunmu, Sophomore, G, Illinois: One of the most underrated players in the country, Dosunmu has the potential to be an NBA first-round pick, and don’t be surprised if he averages 20-5-5.

8. Udoka Azubuike, Senior, C, Kansas: Only played nine games last year due to an ankle injury and wrist surgery, but the Jayhawks were undefeated with him and his 13.4 PPG and 6.8 RPG. 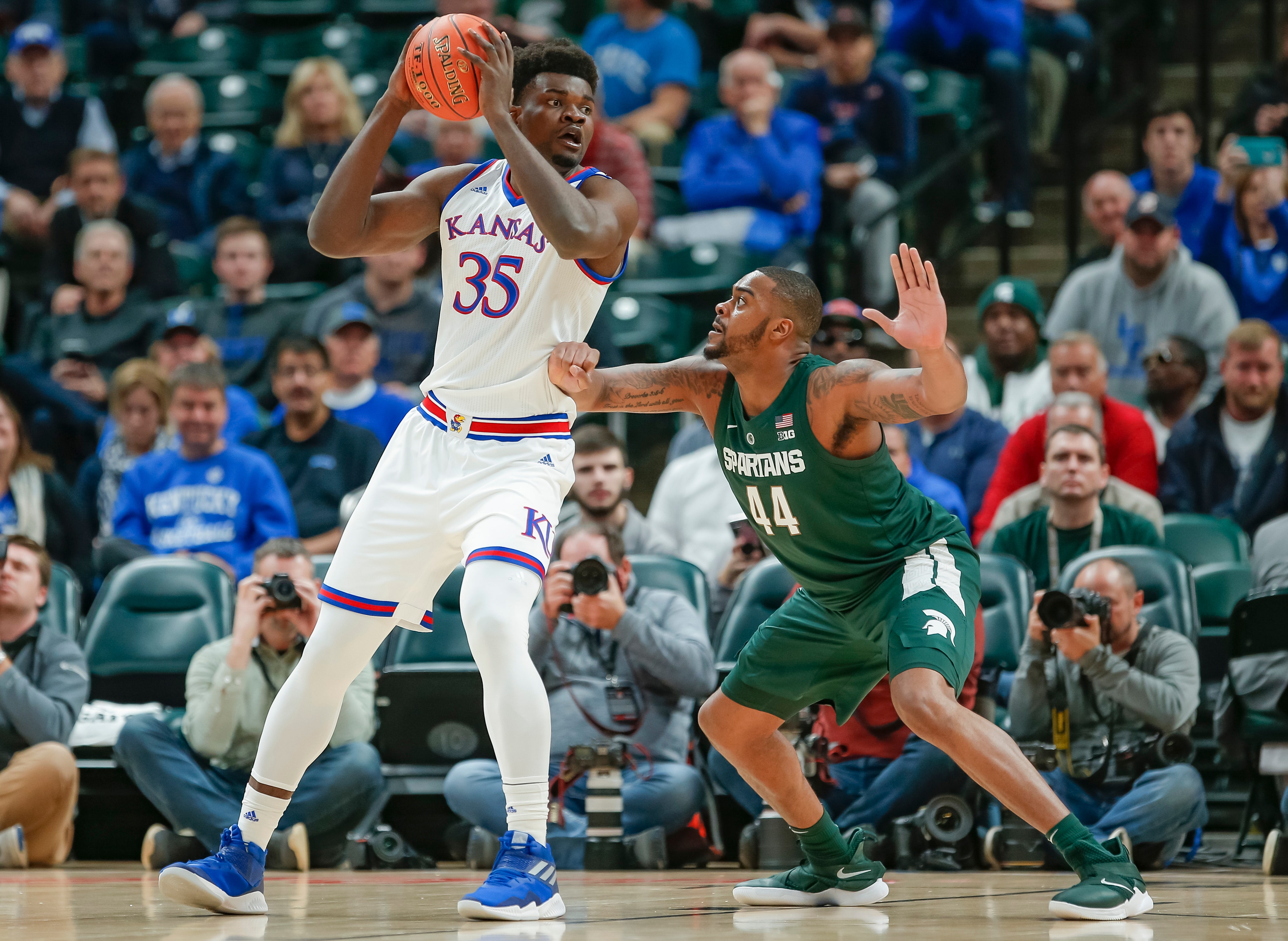 7. Payton Pritchard, Senior, PG, Oregon: Four-year starter is one of the best leaders in the country, and despite modest stats — 12.9 PPG, 4.6 APG — he’ll get first-team All-American consideration.

6. Anthony Edwards, Freshman, SG, Georgia: Potential No. 1 pick in the 2020 NBA draft, this scoring machine is the highest-rated recruit in the history of Georgia basketball, and he’s good enough to carry Georgia back to the NCAA Tournament for the first time since 2015.

5. James Wiseman, Freshman, C, Memphis: Currently nursing an injured ankle, the Tigers have been coy about the status of their 7-footer, who was the consensus No. 1 high school player in the country last year.

4. Markus Howard, Senior, PG, Marquette: The only player in the country with three games scoring 40-plus points — including a 53-point outburst vs. Creighton — can possibly improve upon shooting 40 percent on 3s and averaging 25.0 PPG, which is scary for Big East opponents.

3. Myles Powell, Senior, SG, Seton Hall: One of the best pure scorers in the country, he averaged 23.1 PPG and shot 44/36/84 while leading the Pirates to the NCAA Tournament.

2. Cassius Winston, Senior, PG, Michigan State: Won Big 10 Player of the Year honors and averaged 18.8 PPG and 7.5 APG in leading the Spartans to the Final 4.