The victims, from a Mormon community in northwestern Mexico, were traveling between two family compounds to plan a wedding when they were attacked on Monday by gunmen in broad daylight less than 100 miles from the U.S. border, Mexican officials said.

The massacre was the worst single incident of violence involving U.S. citizens in Mexico since the country’s drug war began in earnest in 2006, when Mexico launched an all-out assault on cartels by deploying the army to take on the powerful gangs. 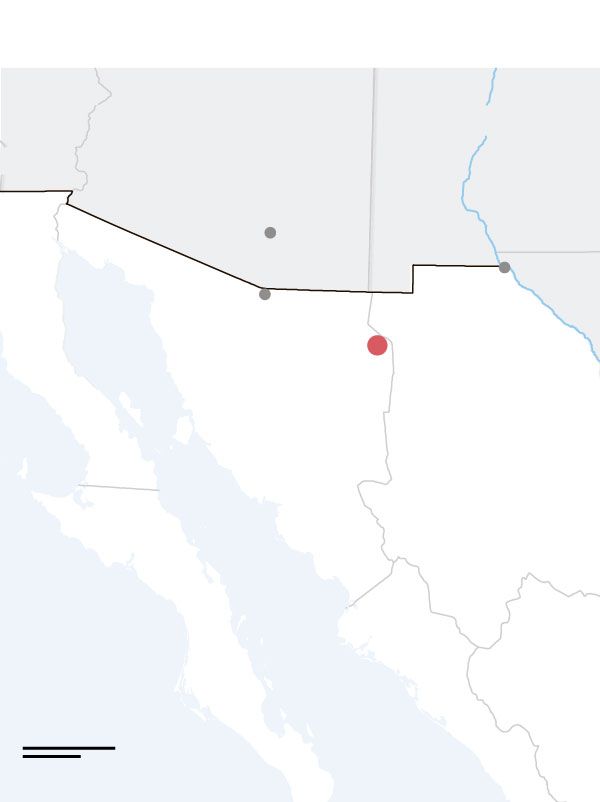 Even in a country accustomed to barbaric violence that has claimed more than 250,000 lives since then, the attack stood out, partly because the victims were U.S. citizens and women and children.

Among the dead were two eight-month old twins, family members said. Seven children survived the attack, including a 13-year old who, after his mother was killed, took the remaining children to hide in the woods and walked five hours to get help.

One of the cars was set on fire—either intentionally or due to gunfire—leaving the bones of victims for identification. One child’s remains were found outside a partly open car door, suggesting the child tried to escape. And a seven-month old was found alive in her car seat after apparently being placed on the floor by her mother before she was killed.

Officials aren’t yet sure why the convoy was targeted. Mexican security minister Alfonso Durazo said it may have been mistaken for members of one gang fighting another for control of the area’s drug trafficking routes.

President Trump and President Andrés Manuel López Obrador of Mexico spoke on Tuesday about “efforts to combat the growing violent behavior of cartels and criminal groups in the region.” Mr. Trump said the U.S. was willing to help Mexico take on the drug cartels.

“This is the time for Mexico, with the help of the United States, to wage WAR on the drug cartels and wipe them off the face of the earth,” Mr. Trump tweeted, adding that “the cartels have become so large and powerful that you sometimes need an army to defeat an army!”

Since taking office last December, the leftist president declared Mexico’s drug war over, saying he would focus on alleviating the poverty that drives young men to join gangs rather than attacking the cartels themselves. He called the strategy “hugs, not bullets.”

But Mexico’s homicide rate has hit record highs this year, and a string of recent massacres has called into question the president’s strategy.

The coordinated attacks across the city forced the government to release El Chapo’s son in an embarrassing setback.

It was at least the fifth massacre of civilians under Mr. López Obrador.

In April, 14 people were killed at a family party in the state of Veracruz, while 26 were shot dead at a bar in August in the same state. In October, 13 policemen were killed by gunmen in Michoacán. Hours later, 15 people were killed in Iguala, in Guerrero, in a confrontation with the Mexican army.

the head of Causa en Común, an anticrime advocacy group. “He can’t keep thinking that a government using legitimate force against criminals is what generates violence.”

Monday’s massacre is likely to complicate the relationship with the U.S. Unlike other recent killings in Mexico, Monday’s victims are dual U.S.-Mexican citizens and most are children, multiplying the impact on public opinion.

“This will raise the temperature among conservative sectors in the U.S. precisely during election season,” said

an analyst at the University of Guadalajara. “We can expect some difficult months ahead in terms of relations with the U.S.”

(R., Neb.), who sits on the Senate Intelligence Committee, said Mexico was dangerously close to being a failed state. “Mexico’s president hasn’t taken the threat seriously and innocent lives have been lost again.” He said that Mexico must join with the U.S. on a “full-scale offensive against these butchers.”

Mr. López Obrador said Tuesday he wouldn’t change his government’s strategy, saying the war on Mexico’s powerful drug cartels carried out by the previous two governments with U.S. help was a failed policy. “They declared war and it didn’t work,” he said.

During the past five years, a surge in the trafficking of methamphetamine and synthetic opioids—which have increasingly taken the place of marijuana, cocaine and heroin—has led to increasing violence in the borderlands of Sonora and Chihuahua states, according to

a security analyst with consulting firm Empra in Mexico City.

How do you think this incident will affect U.S.-Mexico relations? Join the conversation below.

Drug routes between the coastal city of Guaymas, in southern Sonora, and Sonoyta, in northern Sonora and across the border from Arizona, are controlled by the Los Salazar family, an affiliate of the Sinaloa cartel, Mr. Wilkinson said.

Turf wars have escalated in the past two years between Los Salazar and the armed wing of the Juárez cartel, known as La Linea, which controls much of Chihuahua state. Police killings in Sonora doubled between 2018 and 2019 to about 20 this year, the result of cartel-related violence, according to Empra.

The victims of Monday’s massacre were members of a tightly knit faction formed by members of a breakaway group from the Church of Jesus Christ of Latter-day Saints that came to Mexico in the late 1800s, after the church renounced polygamy in the U.S. They were members of a large, extended LeBarón family.

Several of the Mormon settlements in Sonora and Chihuahua are located along the trafficking routes near these turf wars.

The family has had past run-ins with crime gangs. In 2009, Benjamin LeBarón and his brother-in-law Luis Widmar were murdered months after Mr. LeBarón formed a local anticrime group to pressure state officials to free a kidnapped family member.

But the cartels have left them in peace in recent years, said Julián LeBarón, who is related to three of the women killed in the attack, adding that the family didn’t know what prompted the attack.

“We see the cartels in the news every day, but they’ve kind of left us alone in the past because we have help from the federal police,” Mr. LeBarón said in an interview. “They know what it would cost them to mess with us, and that we aren’t a threat to them.”

Mr. LeBarón and another relative, Kendra Miller, gave similar accounts of the tragedy.

Two of the women were heading to see family in neighboring Chihuahua state to plan a coming family wedding, while the third, Rhonita Miller, was heading to Phoenix to pick up her husband, who works in North Dakota, to bring him home for the wedding, Mr. LeBarón said. The details of what happened next are murky but the aftermath was clear.

“The first vehicle was found full of bullet holes and completely ablaze,” Kendra Miller, Rhonita’s sister-in-law, wrote on a Facebook post. Rhonita Miller and four of her children were burned to mostly ashes, she wrote. Video taken by family members showed the charred remains of Rhonita Miller’s car.

About 10 miles ahead were Christina Marie Langford, with her seven-month-old baby in one vehicle, and Dawna Ray Langford and her seven children in another vehicle.

“They both were fired upon from ahead and Christina jumped out waving her arms to let the attackers know that it was women and children in the vehicles. She gave her life to try to save the rest. Dawna and two of her boys were also killed in the gunfire,” Kendra Miller wrote.

Dawna’s 13-year-old son hid his six other siblings in the bushes and covered them with branches to keep them safe while he went for help, according to Ms. Miller and Mr. LeBarón. The boy arrived in LaMora at around 5:30 p.m., giving the first news to local authorities.

Lenzo Widmar, a relative of the victims who cited accounts from one of the surviving children, said the armed men killed Christina Langford despite her having left her vehicle with her hands up. Referring to Mexico’s president by his nickname, he said: “If AMLO cannot deal with the cartels, he must resign or accept the help offered by Trump. We are living in the most absolute impunity.”

Ms. Langford’s baby was found alive in her car seat more than eight hours after the attack, said Mr. LeBarón, who was part of the group that found the family. She had apparently been put on the floor by her mother to try to protect her.

Jhon LeBarón, another family member, wrote on Facebook that several of the children suffered minor bullet wounds. He added: “My heart is completely broken. This feels like a bad dream I want to wake up from.”

—Robbie Whelan in Mexico City and Rebecca Ballhaus in Washington
contributed to this article.

Write to Anthony Harrup at anthony.harrup@wsj.com and Juan Montes at juan.montes@wsj.com

Cancel reply
How Toys R Us Went Bankrupt
Huawei CEO: ‘We Can Survive Without the U.S.’