Airports are still sorting out how to handle the ride-hailing companies crowding their curbs.

Los Angeles, New York’s LaGuardia Airport and Midway International Airport in Chicago also have instituted a system that uses numeric codes to match drivers with passengers in line for rides. Lyft and Uber introduced the system at Portland International Airport in Oregon earlier this year. When passengers click in their apps to summon a ride, they receive a code rather than the details of a specific driver. They give that code to a driver waiting in line for the next fare, who uses it to unlock the passenger’s name and destination.

The goal is to reduce the surge in congestion on airport roads. Demand for air travel has grown since the 2008 financial crisis, straining airport infrastructure. At the same time, ride-hailing and sharing has accelerated from zero to become the most popular way to get to and from many airports.

Phoenix, Newark and Ft. Lauderdale averaged the lowest costs of an UberX ride to convention centers. 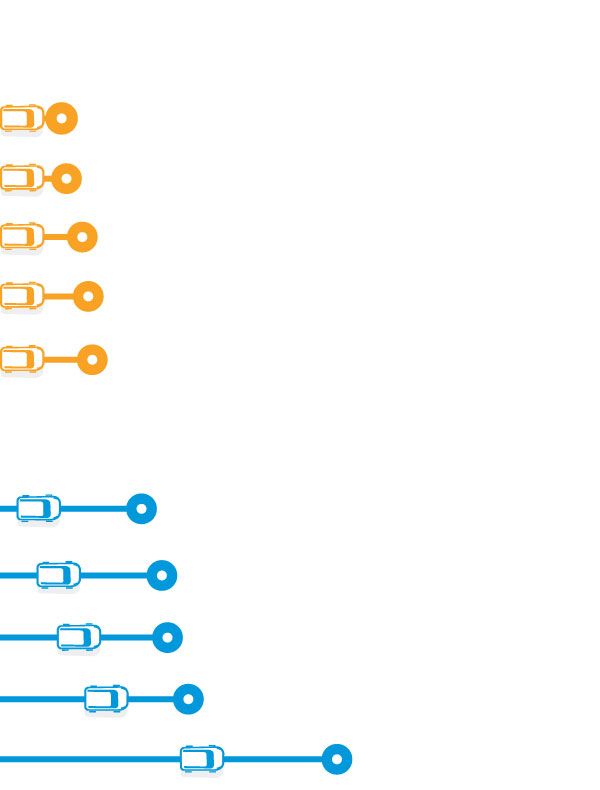 Lowest UberX fares from airport to the nearest convention center

At various times this year, Uber and Lyft drivers in San Francisco took more than a million passengers a month to or from the airport, up from about 100,000 a month in 2014.

“Cars were lining up out onto the freeway,” says airport spokesman Doug Yakel. In June, San Francisco airport moved ride-share pickups from domestic flights to a garage adjacent to that terminal.

Come back to WSJ.com this week for much more on airports, including a review of the 40 largest in the U.S.

Mr. Yakel says his colleagues timed it as a three-minute walk from domestic arrival halls. Many passengers say the schlep takes longer. Drivers say rider confusion over where to wait and how to request a ride has cost them business. “There were some unintended consequences,” Mr. Yakel says.

Similar frustrations are simmering in Los Angeles, where the airport is undergoing a $14 billion renovation before the 2028 Summer Olympics. In October, Uber and Lyft pickups moved to a lot next to the terminals.

Airport officials say passengers can reach the lot with a short walk or aboard frequent shuttles. They weren’t frequent enough for Rich Greenfield, a financial-research analyst, who landed at the airport on Oct. 29, the first day the new lot was in service. One shuttle was too full, so he couldn’t board. He got on the next one and took a seat, he says. Some passengers who had given their seats to older riders were ordered off because standing in the aisles wasn’t allowed.

At the lot, Mr. Greenfield found a swarm of passengers trying to figure out where to meet their UberXL, Lyft Line or other ride-share drivers. Employees from the airport and the ride-share companies there tried to explain how the system worked. Mr. Greenfield opted for a regular taxi, a fleet also relegated to the new lot. It had been nearly an hour since he landed.

“It was an absolutely horrid experience,” he says. Mr. Greenfield has another trip from New York to Los Angeles later this month. Although dreading the ride-share lot, he doesn’t know how to avoid it. “I do not have a strategy,” he says.

Officials at the airport say wait times have eased as passengers at the lot adapt to the code system that matches them with the next Lyft or Uber driver in line. It is essentially a return to a cab stand.

What was your best or worst experience with ride-share or ride-hailing services at U.S. airports? Join the conversation below.

Both ride-sharing companies are using the same code system at about a half-dozen U.S. airports. Some drivers for Uber and Lyft say the companies are directing too many of them to wait in line at airports, compounding traffic on terminal roads.

At many airports tweaking their ride-share logistics, including in Los Angeles and San Francisco, traditional car services continue to collect passengers at the curb.

Steven Everett, a full-time driver for Uber and Lyft, says one day he circled Chicago’s Midway airport 20 times before he made it into the line of about 10 cars waiting to match with PIN-bearing passengers. Better to circle the airport burning gas, he says, than risk getting stuck in the lot down the road where drivers wait to be called to the terminal. “It’s packed like sardines,” he says.

Chicago’s bigger airport, O’Hare International, isn’t using the PIN system or a remote lot for passengers. Occasionally, wait times there have approached an hour when the staging area where drivers wait to be matched with a rider—many call it the pig pen—gets so full that cars can barely move.

The city replaced a stop sign at the lot with a stoplight this year to let more drivers out at a time. A second lot was added down the road, where more drivers can wait for their turn to approach the terminal.

Those changes aren’t enough to convince Lenny Sanchez to start picking up riders again at one of the nation’s busiest airports. The 40-year-old driver for Uber and Lyft says last year he waited three hours on the Sunday after Thanksgiving to collect a passenger from one of O’Hare’s four terminals.

After he had a confirmed ride, his Mazda CX-9 got stuck between others crammed into the parking lot on one of the busiest travel days of the year. The passenger canceled. “I vowed I’m never coming back,” Mr. Sanchez says.

“We do constantly make concerted efforts to monitor any factors that might impact wait times,” Chicago’s Department of Aviation said in written responses to questions about ride-hailing at the city’s airports.

Employees at Lyft and Uber say the companies are talking with many U.S. airports about how to reconfigure terminals that weren’t designed for ride-sharing. “We really want to work with airports one on one,” says Rachel Cargo, Uber’s senior manager for airport operations.

Write to Patrick McGroarty at patrick.mcgroarty@wsj.com