HONG KONG—Clashes broke out after police shot and critically injured a protester as the city’s start-of-week commute was disrupted by demonstrators trying to block roads and delay trains.

In footage circulating on social media, a police officer was seen Monday morning firing three shots toward protesters—hitting at least one at close range—at an intersection in eastern Hong Kong island. A 21-year-old man underwent an operation at a nearby hospital, according to the Hospital Authority, which said he was in a critical condition.

The clashes created confusion for the city’s commuters who were heading to work or school. Many were left stranded at subway stations, while several universities canceled classes for the day. The disruptions continued well into the day as police spilled into the city’s Central district, an area crammed with offices and luxury retailers. 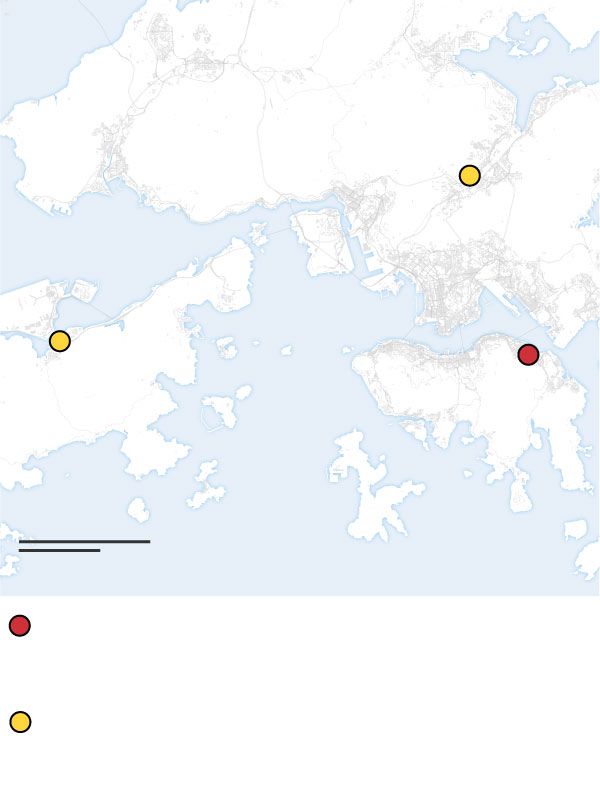 A 21-year-old male protester shot at a close distance.

Police officers drew their revolvers from their holsters.

Around midday, crowds of office workers were seen fleeing clouds of tear gas filling the streets. Some rushed into the lobbies of buildings to seek shelter and poured water over their eyes to relieve the pain. Police made a number of arrests as people chanted abuse at them.

Other graphic scenes circulated online during the day. In one unverified video, a man in a green T-shirt was seen being doused in flammable liquid and set on fire after he confronted protesters who had been vandalizing a subway station. A separate photo showed him shirtless with burns to his torso. The man was in critical condition in a hospital, according to city health officials.

In another incident, the Hong Kong Police Force said Monday afternoon it had suspended an officer from front-line duties and put him on leave after he was seen in a video posted on social media driving his motorcycle repeatedly into a group of protesters. A spokesman said the officer was trying to separate the protesters from a group of police who had been attacked.

Protests, now in their sixth month, have shown no signs of abating even after the government withdrew an extradition bill that initially sparked unrest. Weekend clashes are now commonplace as many young black-clad and masked protesters focus their anger on police, who they accuse of using excessive force to put down protests.

The shooting is likely to add pressure on the government to consider protesters’ demands for a new independent investigation into police conduct. It also threatens to deepen the divide between Hong Kong residents and the government.

The scuffles on Monday morning followed another weekend of clashes between police and protesters. In many districts, residents were seen coming outside to shout abuse at police as they fired tear gas and made arrests across the city.

Peaceful vigils were also held over the weekend for a student who died Friday morning from head injuries sustained in a fall from a parking garage last week while police were using tear gas in a nearby dispersal operation.

The shooting on Monday marked the third time since demonstrations began that a protester has been injured after police fired gunshots. On Oct. 1, an 18-year-old student was shot in the chest by a policeman, while he was trying to attack an officer, video footage appeared to show. Three days later, a 14-year-old boy was shot in the leg by an out-of-uniform officer who was surrounded by protesters.

At the scene of Monday’s shooting, a uniformed policeman drew his pistol with one hand and grabbed a protester with the other, the online video showed. Another black-clad protester approached the policeman and the officer fired at him. The shot protester fell to the ground immediately, clutching the right side of his stomach. The officer then fired two more rounds in the direction of other protesters. Hospital Authority officials didn’t comment on whether there was a second injured person.

A police spokesman later said that the officer fired as a protester was trying to grab his gun.

Outside the intensive care unit of Pamela Youde Nethersole Eastern Hospital, supporters of the injured 21-year-old protester, who has been identified by his friends as Patrick Chow, waited for his family to arrive. A woman in her early 30s said she came to the hospital with her 9-year-old daughter to show support for Mr. Chow.

The gunshot was completely unnecessary, said the woman, who only gave her first name, Ceres.

Mr. Chow had been out protesting before, according to his girlfriend who only gave her last name, Yuen. Ms. Yuen said she spoke to Mr. Chow before he headed out Monday morning.

A friend of Mr. Chow described him is “optimistic” and “people person” who currently studies hotel management. He was a “peaceful protester who is a bit assertive but not the courageous type,” the friend said.

After dawn Monday, protesters set up barricades at several key transportation interchanges around the city, including two road tunnels, according to police. More than a dozen locations were targeted for barricading by protesters, according to footage circulating online and posters in Telegram chat rooms where many protesters receive information about rallies.

In some areas, police responded by firing tear gas. Some commuters got caught in the middle in the district of Tseung Kwan O, where the student died last week after falling from the parking garage. The affected commuters were treated by people appearing to be first aid workers who were carrying water and saline solution.

Demands from protesters widened over the summer to include calls for an independent inquiry into alleged police misconduct against demonstrators and greater democratic rights, including full universal suffrage in choosing Hong Kong’s leader.

has in recent weeks softened her stance on an independent inquiry into how the police have handled the protests, saying she would consider it after assessing the results of an existing probe by Hong Kong’s Independent Police Complaints Council. Pro-democracy groups have said the body isn’t independent and doesn’t have the leverage—it can’t summon witnesses, for example—to be effective.

On Saturday, a panel of independent experts called in to assist the council said the body lacks power and resources to meet the demands of investigating the force’s conduct during the protests, according to a statement posted on the

account of panel member Clifford Stott, a dean for research at Keele University in England.

The independent panel of experts, which is tasked to conduct a fact-finding study into the unrest after growing public concern about police behavior and tactics, urged “a deeper more comprehensive inquiry” by an independent body with greater powers.

—Rachel Yeo contributed to this article.

Write to Eun-Young Jeong at Eun-Young.Jeong@wsj.com, Joanne Chiu at joanne.chiu@wsj.com and Joyu Wang at joyu.wang@wsj.com