Within the milk business, Dallas-based Dean’s brands have struggled as grocery chains push low-price store brands and in some cases build their own milk plants, reducing their reliance on Dean. A recent jump in milk prices, up 10% over the past three months, boosted costs while Dean has worked to close plants and reduce expenses.

The company said it has secured financing to continue operations and pay employees while it discusses a potential sale to Dairy Farmers of America Inc., the largest U.S. dairy cooperative.

“Despite our best efforts to make our business more agile and cost-efficient, we continue to be impacted by a challenging operating environment marked by continuing declines in consumer milk consumption,” said

Dean’s chief executive, who joined the company in July as its third CEO in three years.

Sales of traditional cow’s milk have declined, while consumers spend more on other beverages, such as soy- and almond-based milk alternatives. 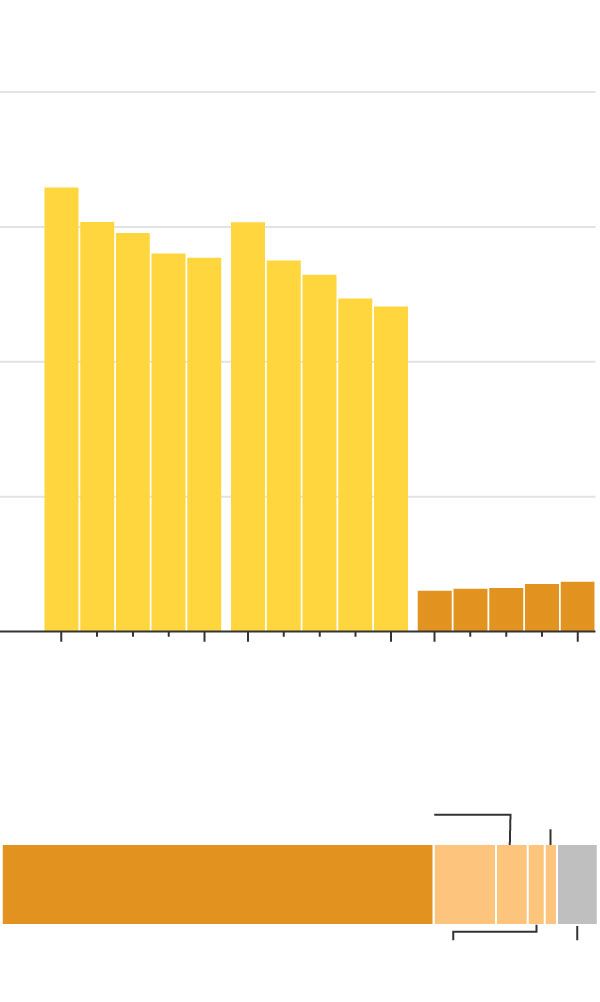 Dean operates about 60 dairy processing plants in 29 states, a network it built through years of acquiring regional dairy companies to become the top U.S. milk processor by volume. The company, which supplies restaurants, supermarkets and schools and also sells ice cream and creamers, traces its history back to 1925, when Samuel E. Dean Sr. acquired a northwestern Illinois evaporated milk plant.

Dairy Farmers of America, which represents about 14,000 dairy producers, has been closely tracking Dean’s financial situation and has financially prepared for the company’s bankruptcy, said

“Dean Foods is integral to the dairy landscape and our largest customer representing more than 20% of DFA’s raw milk sales,” she said.

For years Dean has tried to shrink its network and in March estimated its head count at 15,000, down from about 23,000 a decade ago. The company’s efforts to close underperforming plants and cut costs haven’t been able to keep up with declining sales, however, as big retailers like

—one of Dean’s biggest customers—have opened their own plants to supply their store-branded milk.

Cheap milk is a tool for many retailers to draw customers, pressuring margins for Dean, which has invested heavily in its national DairyPure brand.

U.S. consumers in 2018 drank 146 pounds of milk on an annual per capita basis, according to U.S. Department of Agriculture data—the lowest level since the agency began keeping records in 1975 and down 39% over the past 40 years. Overall U.S. dairy consumption has grown by nearly one-fifth over that period, however, as consumers buy more yogurt and pile more cheese onto pizzas.

manager of knowledge exchange at agricultural lender CoBank, said consumers aren’t totally abandoning milk, with some purchases shifting toward organic and ultrafiltered varieties. But the days of the gallon-size plastic jug as a staple in U.S. refrigerators are fading, he said.

“They’re not pouring milk on their cereal anymore; they’re having a power bar instead,” Mr. Ehmke said.

Until its bankruptcy filing Tuesday, Dean had reported five straight quarterly losses, and some analysts anticipated the company would continue losing money throughout 2020. The company’s 2018 sales of $7.8 billion were down 38% from a decade ago, and its shares have been trading around $1 since May, down from above $21 at the end of 2016.

In February, Dean’s board of directors launched a strategic review, hiring advisers to explore options including a sale. Dean received several offers to buy some of its plants or its ice-cream business, The Wall Street Journal reported, but executives rejected those bids. After installing Mr. Beringause as CEO, Dean in September said it would stay independent.

Dean Foods said Tuesday it would use the bankruptcy process to address its debt and unfunded pension obligations while it pursues a sale. Bankruptcy could also help Dean close more plants, though previous closures led some Dean customers to complain last year about shortages and late deliveries. Some grocers drew up contingency plans in case Dean sold off operations or faced other problems.

For dairy farmers like Brent Pollard, the tumult around Dean adds more uncertainty to an agricultural sector where profits have been slim and bankruptcies have been on the rise, due to low prices and high supplies. Wisconsin, the second-largest milk-producing state, lost more than 800 milk-cow herds over the past 12 months, according to USDA figures from October.

Mr. Pollard milks about 80 dairy cows near Rockford, Ill., near where Dean got its start, and he said he has been working to diversify away from fluid milk. His farm also produces corn, soybeans and wheat, and the dairy cooperative he sells his milk to invested 10 years ago in a creamery, to convert more of its members’ milk to cheese.

Though Mr. Pollard hasn’t marketed much of his milk to Dean, he said its struggles would send a ripple through the industry. “Whenever we as farmers lose a potential market or buyer for our milk, that’s a bad thing,” he said.

Write to Jacob Bunge at jacob.bunge@wsj.com