The Indianapolis Colts (6-4) are tied with the Houston Texans (6-4) for the top spot in the AFC South. For the Texans, a lot is on the line … not only are they coming off an embarrassing shellacking by the Ravens, but also a loss to the Colts earlier this season. With all this at stake: Can Deshaun Watson deliver on Thursday night?

What do you think? You can answer this question and more by playing the FOX Sports Super 6 game for free! And guess what – you even have the chance to win $25,000! All you have to do is download the app, sign up, make your picks and watch the game. It’s as simple as that!

Even better, you’ve got me to help! Let’s see who I’m taking:

Who will catch or rush for the Texans first touchdown?

Well folks, I’m to go off the board here and pick any other player. I mean the Texans, they really spread the ball around. We could see Keke Coutee get in the endzone … Duke Johnson’s not listed … Kenny Stills might even have a shot – especially if Will Fuller doesn’t play. That guy always seems to be hurt … he’s questionable for Thursday nights game. I’ve got to go with any other player for the first Texans touchdown.

Who will catch or rush for the Colts first touchdown?

And again, I’m going with any other player. Marlon Mack with the injury (a fractured hand) … he’s out. But remember: His replacement Jonathan Williams had a monster game last week with over 100 yards and a score. Nyheim Hines is also an option to get in the endzone. T.Y. Hilton is questionable – we don’t know if he’s going to play. I think the safe bet here is any other player for the Colts first touchdown.

Let’s use history as a guide: The last four meetings both teams have combined to score over 20 points, so I’m going to go with 21-27 points in the first half. Divisional matchup – they know each other’s strengths and weaknesses … 21-27 points seems like a good total for the first half. 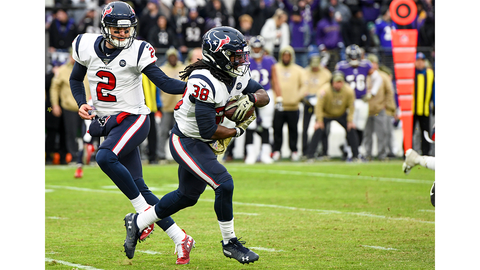 This is where it gets difficult folks … you don’t know who is going to be leading or trailing, and you don’t know who gets the ball first. I’ll err on the side of caution and go with the Texans on the ground. Houston is the fourth leading team in scoring during the second half. Deshaun Watson in comeback mode: I think he can take them downfield quicker than Brissett. Give me the Texans for a rushing touchdown to start the second half.

How many passing touchdowns combined for Jacoby Brissett and Deshaun Watson?

I’m going to go with five here … that’s how many they combined for in their earlier meeting. Brissett had four – he had T.Y. Hilton in that game … unsure if he’s going to play in this one. But again, I like the over here – a lot of scoring. I’ll go with five passing touchdowns combined for the quarterbacks in this one.

The pick: The Colts by 6 or fewer

This is a very difficult matchup here – especially for the Texans who are looking to bounce back after getting destroyed by the Ravens last week. But, I’m feeling upset here folks. I like the Colts to win by six or fewer – sweeping the season series. The reasoning is simple: I think the Texans are really hurting without J.J. Watt … they couldn’t stop Baltimore, and I worry about them stopping Brissett. Give me the Colts to pull the upset winning by six or fewer.