President
Donald Trump began a new year Tuesday perched squarely on the junction of opulence and bluster that have come to define his personal and political persona, the clink of Champagne glasses wafting under his stern warning to Iran and a red carpet framing his flaming of Democrats.

He was ushering out a decade that began by crowning Bret Michaels the Celebrity Apprentice and ended with fresh risk for presiding over conflict on two continents. The now-familiar dichotomy between Trump the billionaire celebrity and Trump the commander in chief is never more apparent than at Mar-a-Lago, the South Florida estate where guests jockey to meet the proprietor who also happens to run the country.

Appearing before a bank of cameras he had invited onto his property, Trump warned Iran that the US would vanquish it quickly and deemed House Speaker Nancy Pelosi a “highly overrated person” as his wife looked on.

“We’re going to have a great year, I predict,” Trump said as he arrived to his party. 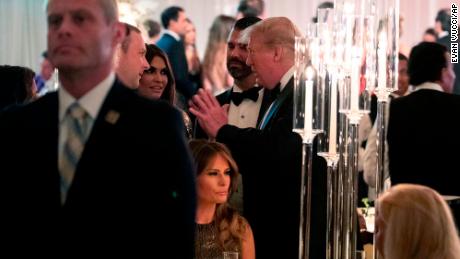 Trump was appearing as heightened tensions and dramatic violence threaten to force him into confrontation as he begins the 2020 election year — a less-than-ideal position for a President who has vowed to end or resolve foreign conflicts.

Protesters stormed the American embassy in Baghdad, and
a furious Trump blamed Iran. Meanwhile, precarious diplomacy with North Korea appeared to be faltering as Kim Jong Un teased a new “strategic weapon” and i
nsisted there “will never” be denuclearization on the Korean peninsula if the US “persists in its hostile policy towards” the hermit nation.
Trump showed no signs of souring on Kim, calling him a “man of his word” and repeating his idea that
a threatened “Christmas gift” might be a “beautiful vase” instead of a long-range missile.

And he trumpeted his handling of the Iraq situation and compared it favorably to another incident of violence at an American diplomatic post that occurred under his predecessor.

“This will not be a Benghazi. Benghazi should never have happened. This will never, ever be a Benghazi,” he said, without explaining how protesters were able to breach layers of embassy security in Baghdad to begin with.

Trump said he didn’t want war with Iran. But if comes to that, he said, it “wouldn’t last long.”

If the image of a tuxedo-clad President issuing bellicose threats to Iran as “America’s #1 corporate and private party band” tuned up nearby gave Trump or any of his aides pause, it did not show. Instead, Trump leaned into the discord.

“This is not a Warning, it is a Threat. Happy New Year!” he wrote on Twitter a few hours before joining his guests at the party.

Trump spoke after a parade of fur-and-diamond strung guests, each paying hundreds or thousands of dollars to join him, streamed into the Donald J. Trump Ballroom, the Louis XIV-style hall he erected and named for himself after a prolonged battle with Palm Beach in the 1990s.

All four of his adult children arrived with a significant other in tow. Donald Trump Jr. and his girlfriend, the former Fox News host Kimberly Guilfoyle, declined to answer a question on Iran. Tiffany Trump only smiled when asked her New Year’s resolution.

Ivanka Trump, in a red gown with bell sleeves, slipped in behind a wave of fellow guests — including the gold sequined leader of the “Trumpettes” women’s group, Toni Holt Kramer, who was speaking at the microphones as Trump and her husband, fellow White House senior adviser Jared Kushner, walked quickly past with their children.

Eric Trump was more forthcoming, telling reporters he believed impeachment was “backfiring” on Democrats. It was a sentiment echoed by Housing and Urban Development Secretary Ben Carson who predicted Trump would overcome his current predicament.

Most effusive on the red carpet was the President’s personal attorney Rudy Giuliani, who stood amid a scrum of reporters and said he’d gladly be willing to testify in an impeachment trial if he’s asked. 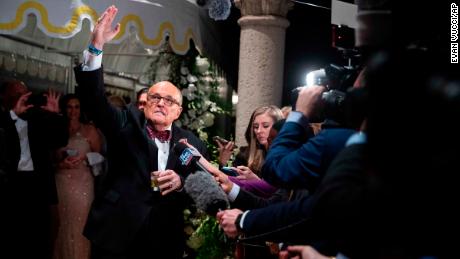 “I would testify, I would do demonstrations, I’d give lectures, I’d give summations or I would do what I do best. I’d try the case. I would love to try the case,” he said, removing his glasses, as other guests stopped to gawk.

For Trump, his annual New Year’s Eve appearance was a return to tradition after choosing to ring in 2019 at the White House amid a partial government shutdown. Guests at last year’s event described frustration at having spent hundreds or thousands of dollars for tickets, only to have the headliner remain holed up in Washington tweeting angrily at Democrats over his border wall.

Trump was in residence at Mar-a-Lago this year but no less embattled. He arrived two days after being
impeached by the House of Representatives and has spent time in Florida mulling his defense strategy for the upcoming Senate trial.

He claimed to have spent much of the day on Tuesday receiving updates on the tenuous situation in Iraq, lashing out when he thought the media reported he’d been playing golf.

“I did NOT!” he insisted, “I had meeting in various locations, while closely monitoring the U.S. Embassy situation in Iraq, which I am still doing.”

Trump did, however, travel to his golf course wearing a white golf shirt on Tuesday morning before returning to his resort an hour later. And as guests began arriving for his New Year’s Eve gala, some in colorful Bentleys and Rolls-Royces, he was tweeting on unrelated topics, like his separate grudges with California’s governor and France’s President.

He appeared in a more genial mood by the time he strode down the red carpet to greet reporters. In past years only a small group of pooled media has been permitted on the Mar-a-Lago premises but this year Trump opened the event to everyone, ensuring a bank of cameras for his guests to walk past before entering the party.

Inside they were met with a tree-sized spray of white blooms and greenery-wrapped spheres with flickering lights inside. The menu was filled with Trump favorites like an iceberg wedge salad and baked Alaska.

After Trump had answered his last question and was walking away, a reporter asked first lady Melania Trump — who until now remained silent and stone-faced — for her New Year’s resolution.

“Peace on the world,” she said, smiling widely.

Boris Actually: Hes the first PM with a girlfriend since Hugh Grant
How to succeed at your New Years resolutions this year