Daniel Suarez has received several kicks in the gut in the last few years (some would say the kicks have hit lower on his body), and certainly as many as any other NASCAR Cup Series driver.

So when talking about the nerves Thursday night and handling what will be the most excruciating race of his NASCAR Cup Series career, he at least has some perspective.

“I’ve been through a lot the last couple of years,” Suarez said. “This is just one more thing. It’s a lot of work, a lot of pressure. But we’ll be good. I’ve been in these situations many times in the past, and I know how to handle these situations.

“I have to control what I can control and do the best with that.”

Daniel Suárez talks about his new ride with @GauntBrosRacing. pic.twitter.com/9JB9d3zyg6

Actually, Suarez hasn’t faced this type of pressure, the pressure to make the Daytona 500. His other two Daytona 500 starts didn’t require him to race his way into the field.

Suarez is among five drivers vying for the final two spots on the Daytona 500 grid when the 150-mile qualifying races run Thursday night at Daytona International Speedway (FS1 coverage begins at 6 p.m. ET).

The way the 40-car Daytona 500 field is set is the 36 drivers in cars with NASCAR charters – NASCAR’s version of a franchise – are in the race. The highest-finishing “open” driver in each of the two 60-lap races Thursday earns a spot, with the final two spots determined by the fastest in qualifying speed from this past Sunday.

Justin Haley and Brendan Gaughan posted the two fastest speeds in the single-car runs Sunday, so they know they can fall back on those to make the field. The result: Don’t expect them to do anything remotely dicey in the 60-lap races.

That means that most likely the top finisher in the first duel among Suarez, Reed Sorenson and Chad Finchum will make the Daytona 500 field, with the final spot coming down to Timmy Hill or JJ Yeley in the second duel. If Haley or Gaughan finish as the top open car in his duel, then Sorenson gets a spot on speed. If both Haley and Gaughan finish best in their duel, Sorenson and Hill fill the final two spots.

Suarez is the only driver among those seven who competed full time in the series last year, having finished a career-best 17th in the standings driving for Stewart-Haas Racing, his first year there after being replaced at Joe Gibbs Racing by Martin Truex Jr.

SHR, looking for the next Kevin Harvick and unsure of the reliability of the Suarez sponsorship, replaced him with Cole Custer, winner of seven Xfinity races and son of SHR executive Joe Custer, for 2020. Suarez scrambled and, with the help of a Toyota engine deal, was able to convince Gaunt Brothers Racing to shift from its part-time plans to a full-time operation.

Gaunt Brothers has tripled its staff from about 10 to 30 people in the last month and has enough cars prepared to make it through the three-race West Coast swing that follows Daytona.

The team – the only committed full-time open team for the season — has the funding to continue racing even without making the Daytona 500, but not racing Sunday certainly would be a blow to the team psyche. Last year, Parker Kligerman faced a similar situation and put the No. 96 into the 500. 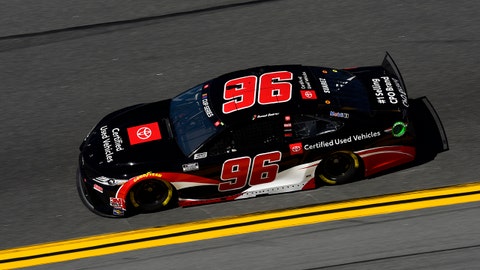 An open team can earn about $150,000 in purse for making the Daytona 500, and a 20th-place finish could boost that to $400,000. Of the open teams, the only owner who said making the race would truly impact potential future races was Carl Long, whose MBM Motorsports is fielding the cars for Hill and Finchum.

Sorenson, who has plenty of experience and will drive for Premium Motorsports, is likely the biggest threat to Suarez in his duel.

Suarez has three fellow Toyotas in the field (other than Finchum). As far as Sorenson’s friends list, Rick Ware Racing driver Joey Gase is in the field and would likely work with him although the likelihood of him being strong enough to give Sorenson a solid push is debatable.

“We just have to do our thing and try to do what is best for myself,” Suarez said before seeing the lineups. “Unfortunately, there is not many Toyotas out there. … If that [help from Toyotas] happens, great. If it doesn’t, I will have to just do my thing.”

In keeping with the theme of a driver who has had to battle adversity, Ross Chastain is in a new, second full-time car at Kaulig Racing. Chastain was supposed to drive for Chip Ganassi Racing in the series last year, but after sponsor D.C. Solar became the target of a federal fraud investigation, the Xfinity team folded.

After driving the majority of races in all three national series and contending for the truck championship, Chastain will try to challenge for the Xfinity title in 2020. He won the Daytona race in the Xfinity Series last July, a race where, since he wasn’t running for points, he could be more aggressive.

“I don’t think I’m going to get away with some of the stuff I got away with last July,” said Chastain, who is running all three national series races this weekend at Daytona.

On the truck side, Todd Gilliland would be the driver who will look to create the most of another chance. Gilliland, who drove for Kyle Busch Motorsports the last two years and suffered through a 2019 where he didn’t make the playoffs but finally won in October at Martinsville, will drive for Front Row Motorsports.

Gilliland’s father, David, helped FRM in its infancy as a Cup program, and has formed an alliance with FRM and his DGR-Crosley Racing team. DGR will build the trucks, but it’s FRM that is bankrolling (and securing sponsors) for the effort.

Check the radio and tape. I bail all the time. @ClintBowyer might wanna start trying to 😁

“Dumb, dumb racing. Just dumb moves being thrown out there. Guys that don’t know what they’re doing so they throw crazy a** blocks. It’s just ridiculous. We shouldn’t be wrecking all these cars. … Maybe we need to take the helmets out of these cars and take the seat belts out so somebody will get hurt. Then we’ll stop driving like a**holes.”

— Brad Keselowski on blocking after the Busch Clash on Sunday

NASCAR
Who is Ryan Newman? Rocketman, family man, and more than a wreck