It will take a while before Denny Hamlin can celebrate his Daytona 500 victory.

He will return to Daytona International Speedway at some point to “induct” his car into the building that the track uses to start and finish track tours, a ceremony typically done the morning after the race.

Maybe in August, his team will stop by the Steak & Shake that Joe Gibbs Racing traditionally visits following a Daytona 500 win.

Probably earlier than all that, they could at least have a party.

Hamlin should want to look at the finish, not for the harrowing aspect of the Ryan Newman crash, but to relive how incredible it was that he won the Daytona 500 surrounded by seven Fords in the final turns and without another Toyota in the same zip code.

The three-time Daytona 500 champion didn’t have a chance to celebrate, partly because of rain pushing the race to Monday night and the somber mood following the race in awaiting an update on Newman’s condition.

Before heading home and to New York City for a media tour, Hamlin stopped at the hospital to see Newman. He was able to talk to Newman’s father.

“It was just a good thing to do to show your respects and show you care,” Hamlin said Tuesday afternoon. “Ryan is a guy that I’ve got a great relationship with on and off the race track.

Ryan Newman has been treated and released from Halifax Medical Center pic.twitter.com/J0twhGgQm7

Through it all, Hamlin should find time to celebrate his significant accomplishment that started the season.

“I don’t know if it’s OK to celebrate, is it not?” Hamlin said a day before Newman was released from the hospital. “We feel confident Ryan in the long run is going to be OK.

“We’ve got to eventually put everything in perspective and obviously think of him and his family and later down the line think about what we accomplished because it was significant.”

Every Cup car has a high-speed camera focused on the cockpit that is triggered at the time of accident (it is connected to the incident data recorder wiring harness). NASCAR doesn’t release the footage but uses it to analyze what happened in the car and the injuries sustained. https://t.co/1kM9pFs9Ly

As Hamlin walked Tuesday around the New York Stock Exchange as part of his Daytona 500 winner media tour, he had not slept since the win. He should have been beaming with pride in the move to win the race, where he ended up losing the lead to Newman and Ryan Blaney. He decided to push Blaney and see what happened.

Blaney couldn’t get by Newman and said he was content to push Newman to the win but accidentally clipped Newman to trigger the crash. Hamlin beat Blaney by inches.

“What I knew I wanted to do was I wanted to put them on the left side of me,” Hamlin said. “I let them go to the left. Another key move was instead of battling Blaney side-by-side was just backing off, getting behind him and knowing my best chance was to push him to the lead and let’s see what happens after that.

“Everything kind of just worked out like I hoped except for the Newman crash, obviously.”

Here is the final lap of the Daytona 500 in which Ryan Newman’s car was flipped at the line.

We will continue to keep you updated on his status as we learn more. pic.twitter.com/qkEwQBpoP0

While the celebration will come later, Hamlin has 34 races to get through before he could have a shot to complete his NASCAR resume with about the only thing missing – a Cup championship.

There are still more steps to get there, as Hamlin crew chief Chris Gabehart has set a goal for Hamlin as far as playoff points for the season. Hamlin won’t say what the goal is, only that it’s stout.

Hamlin obviously is optimistic to build on his winning seven of the last 37 races. He will joke that he lobbied for a change in the short-track package despite having posted 10 top-5s in the 11 races at ovals 1-mile and shorter. He’s ready for a full season, not just Phoenix. 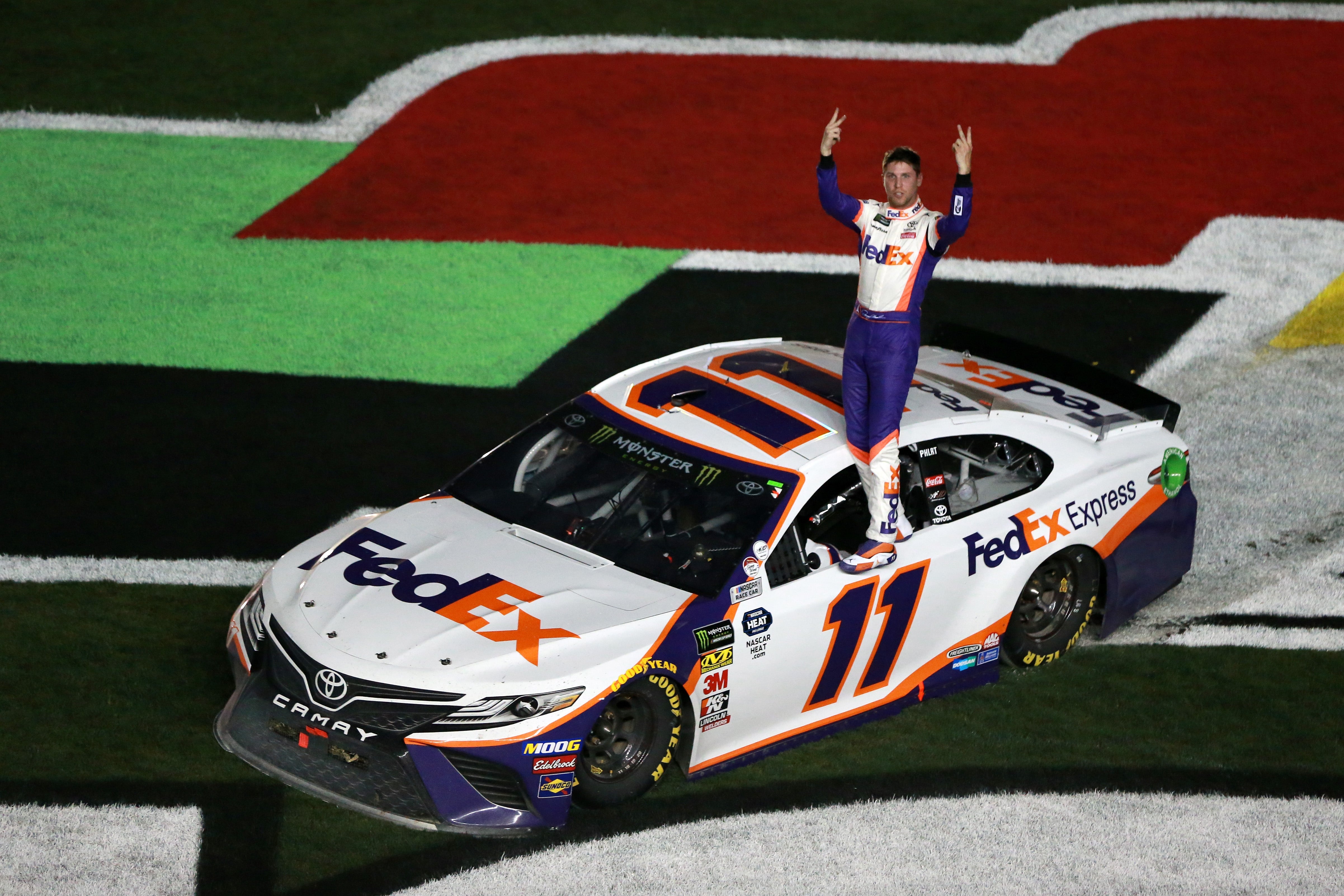 At 21 years old, Noah Gragson has grown up in front of the NASCAR world. He climbs fences after wins. He slid across the front of his car as he celebrated his victory Saturday at Daytona. He once got rebuffed from a trophy girl he tried to kiss. He’d act as the silly kid he was — and at times still is, as anyone who follows him on social media knows.

The knock on Gragson is that he’s good but not great, personable but not mature enough to be a serious championship contender. The win Saturday might change that.

“He’s got a real interesting personality, which is great but it sometimes can give off the impression that he’s not as dedicated as he should be,” JR Motorsports owner Dale Earnhardt Jr. said.

“But I know for sure where his heart is, where his mind is on his craft. … He’s just going to be him and we have to let him do that.”

Grant Enfinger’s win in the season opener Friday wasn’t big just for himself, it was big for the ThorSport organization. You don’t put silver in your paint scheme to celebrate a 25th anniversary and not win.

Enfinger won the truck regular-season title in 2019 without a win. And teammate Matt Crafton won the championship without a win all year.

“Over the winter we went to work, and that was the goal — we need to win more races,” team general manager David Pepper said.

The good news has continued to come for Newman, but this was the tweet that let us all know he truly would be okay.

Quote of the Week

“I’m not going to buy any lottery tickets for the rest of my life. I think it’s amazing that I’ve won my second and as many Daytona 500s as a crew chief.” — Hamlin crew chief Chris Gabehart

Who is Ryan Newman? Rocketman, family man, and more than a wreck
NHL