With each passing week, the Boston Celtics’ soon-to-be superstar keeps getting better and better.

Only one other Celtic has averaged 30 PPG on 50% shooting in a month in the NBA three-point era; Larry Bird. pic.twitter.com/vCpeZI7Lje

Jayson Tatum is really young, but it hasn’t stopped him from being really good. Over the past month, he’s put together some of the most impressive individual performances in the NBA this season, all while carrying his team to a 9-2 record in February.

And while his point totals are usually the numbers that stick out initially, it’s the totals that Tatum creates in the win column that have him on the brink of superstar status. 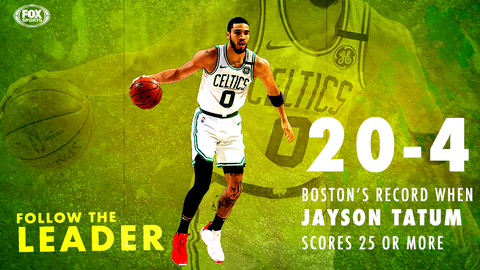 That is not a meaningless statistic. That is proof that when Tatum is ballin’, he affects winning at a high level.

Further proof is that Boston is 9-10 on the season when Tatum scores less than 20 points.

Let’s just look at the last five games for example, in which Tatum is averaging 35.4 points and 8.2 rebounds.

The Celtics are 4-1 in those five and their only loss was a 2-point defeat on the road against the NBA’s second best team, the Los Angeles Lakers.

Jayson Tatum has been one of the 10-15 best players in the NBA since December. He’s blossomed finishing at the rim and Celtics lean on him for more shot creation. Looks for real. Boston’s title hopes rise dramatically if he continues to be its best player. pic.twitter.com/T9zqmN17ek

Tatum had 41 in that game for good measure.

And some of the stuff he’s doing offensively is just nasty.

Some would call it cruel, even.

That was from Wednesday night, when Tatum stopped off in Portland and delivered 33 to the Blazers.

Now, we know that we always get ahead of ourselves when it comes to young, up-and-coming stars.

We just get so excited for fresh blood!

Our Nick Wright, despite Tatum’s recent run, is not ready to crown him Larry Bird Jr. just yet.

.@getnickwright is still not sold that Jayson Tatum is a superstar.

“We have to define what star is. Jayson Tatum is averaging 30 this month, he’s doing it on 51% from the field, 50% from 3-pt, the Celtics have won 9-of-11. But there are tiers in this league.” — @getnickwright pic.twitter.com/uIglnrEODr

Then, he broke it down into tiers.

No one can argue with the LeBron tier, but there is some debate about the Russ Tier and Tatum Tier.

Celtics fans: Take a deep breath. This is why I said “Tatum isn’t a star”. There’s 15 guys in the league clearly better than him, another dozen right there with him. There aren’t 20 “stars” in the league. https://t.co/ixwWaB8vCk

Sure, it’s never wise to pump a guy up before he is ready.

But this Tatum thing is no fluke.

“Everybody around the league when you’re talking to star players say that @jaytatum0 has the most star potential out there out of the young prospects. We haven’t even see his full potential.” — @ChrisBHaynes pic.twitter.com/8UnnFt4Di4

Even the King sees it.

LeBron, you’re still the King for the foreseeable future.

But that hasn’t stopped the NBA from officially crowning its newest prince.

Changing the NFL playoffs format would make the postseason even better
The U.S. Olympic table tennis team is truly open to all, so we gave it a shot