There are roughly 20 games left in the NBA season. It’s go time.

And the Los Angeles Clippers are getting going.

The Clippers are coming. We can’t say they’re here quite yet, because with their talent, ‘here’ would mean they’ve won a championship.

“This is why people are so high on them, b/c of what they can be when they’re healthy.” — @sarahkustok pic.twitter.com/dCpU17G3Ki

But as they traverse arguably their toughest stretch of the season, they have won their last five games, and maybe the two most important games of the season are on the horizon. 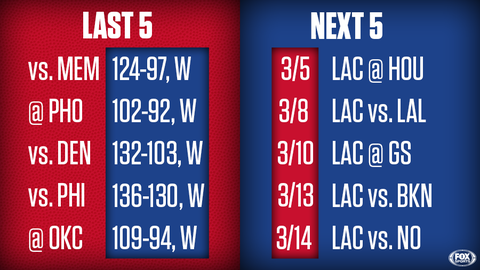 “If the Clippers beat the Rockets in Houston & beat the Lakers, then I probably have to take them a little more seriously than I have been. I think they’re more likely to go 0-2 than 2-0. These are the 2 teams they’re going to have to beat to make the NBA Finals.” —@getnickwright pic.twitter.com/j6UiGFtzQk

Nick is right. Even he’ll have to get onboard.

Tuesday night’s win over Oklahoma City was an impressive one. The Thunder – currently sitting at 6th in the West – had won five of their last six, their only defeat coming at Milwaukee on Friday.

However, the Clippers made it look easy.

LAC led by 11 after the first quarter, by 12 at halftime, and by 19 going into the fourth.

It was a beatdown and the perfect precursor to tilts with their two fiercest Western rivals.

Houston has had success against the Clippers this season, but there have been a few caveats alive in their three matchups.

All the stars played in the third matchup, in what was a second win for Houston.

The Clippers will need to beat the Rockets on Thursday to even the season series, but on Sunday, the Lakers will be the team looking to make up ground.

What’s also true is that in the two LAL-LAC battles so far this season, Anthony Davis hasn’t necessarily been slowed down…but he hasn’t sped himself up either. 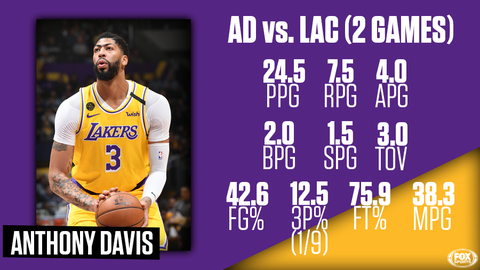 Presumably, if the two teams meet in the playoffs, AD will need to be better in order for the Lakers to beat the Clippers.

The Clippers are favorites to win the title.

“There’s only 1 other team that can say they are balanced at both ends of the floor to the level that the Clippers are in the Western Conference & it’s the team they beat twice [Lakers].” — @RicBucher pic.twitter.com/V04yXdyRuq

In those two games against the Clippers, LeBron James is averaging 20.5 points, 9.5 rebounds and 9.0 assists. He’s shooting 37.2 percent from the field and 17.6 percent from three.

That version of LeBron James is not beating the Clippers by his lonesome.

James is still leading the debate for best player in the Western Conference.

“I think we’ve overrated the caliber of playoff performers most of this roster is, except for Kawhi…. All of the advance stats, the record, the eye test, who has the best player all says the Lakers are better. All the Clippers have are the head-to-head matchups.”—@getnickwright pic.twitter.com/YYthtw5fDJ

But, there is a debate.

If anyone is equipped to deal with LeBron head-up, it’s Kawhi Leonard.

By Monday, we’ll have a better feeling of how the West will be won.

On to the weekend.