Tua Tagovailoa is “fully cleared and ready to compete” less than five months after having hip surgery https://t.co/o66uZfROfw

As of Monday, according to his representative, former Alabama quarterback Tua Tagovailoa is fully cleared to play, following a significant hip injury he suffered in November 2019. So, what does this mean for his 2020 NFL Draft stock?

…doctors say that Tua passed his last medical checkup with flying colors, and reports suggest that he could be ready to play Week 1 of the 2020-21 NFL season.

“The belief continues to be that whenever the NFL season begins … [Tua Tagovailoa] would be able to play.”@LauraRutledge is hearing that Tua could be ready week 1. pic.twitter.com/D3CzJcDQky

Before the injury, the 22-year old college superstar was a top contender for the No. 1 pick in the upcoming NFL Draft. In the nine games he played during the 2019 season, Tua racked up 2,840 yards passing and 33 touchdowns.

He completed 71.4 percent of his passes and threw only 3 interceptions.

His overall college resume is remarkable: 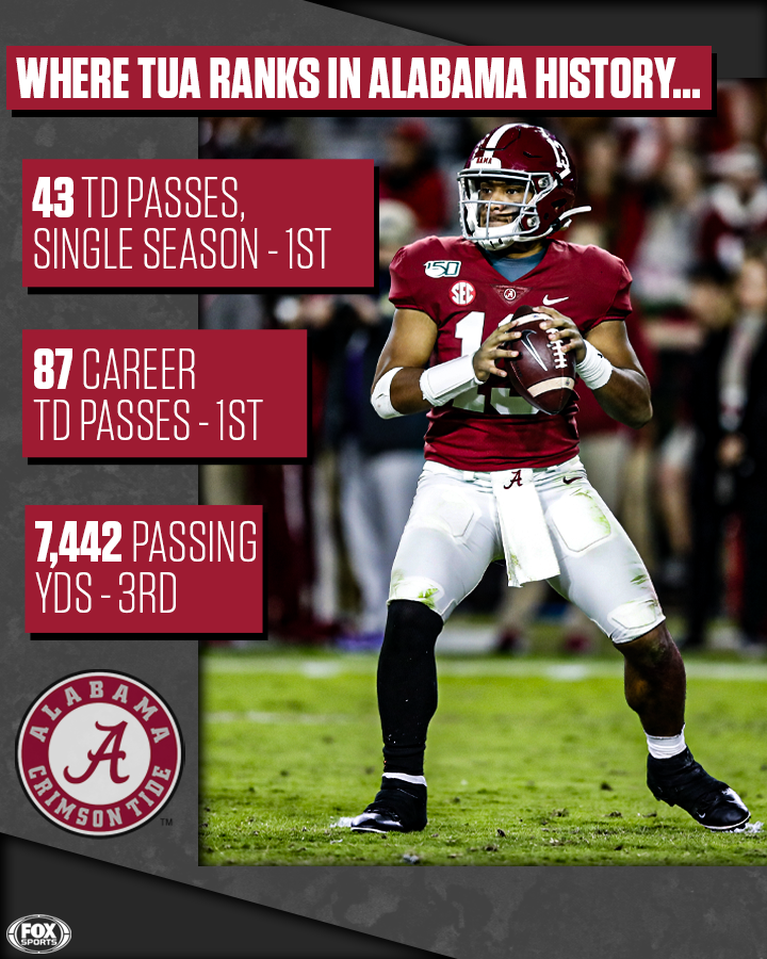 Due to his late season injury, Tua was unable to perform at the NFL combine at the beginning of March, but teams and scouts were able to evaluate his medical status. Even then, his progress impressed, and he has only continued to improve.

He planned to hold a private pro day on April 9, but it was derailed by the coronavirus pandemic.

With college prospects now banned from visiting NFL teams due to the coronavirus pandemic, and with doctors being unable to examine players on those trips, Tua Tagovailoa will remain the draft’s top medical mystery, with teams being unable to get the look at him that they wanted.

Yet, it’s possible the show will go on.

There have been rumors circulating that Tua might schedule a live-streamed or taped version of his individual pro day, although no official plans have been made just yet.

“I do like the idea that they’re being innovative and trying to find a new way to get teams information on Tua, but at this point, it is what it is with Tua … you know what he’s capable of,” said FOX Sports’ Joy Taylor.

Remember when Drew Brees could have been a Dolphin? Should Tua do a virtual Pro Day for teams? @theherd pic.twitter.com/yY2wFJEORU

And while a virtual pro day isn’t the best option for assessing a prospect, it’s a better option than having no pro day at all.

In addition, the draft always comes with uncertainty, and even the healthiest of players aren’t a guarantee, which Nick Wright pointed out on Tuesday’s First Things First.

So, why not bet big on a player whose college production has arguably been better than that of any other player’s in the draft?

“My advice to all GMs out there: fortune favors the bold,” said Kevin Wildes on First Things First.

“Tua reminds me of Steph Curry. Everyone who watched the tournament knew Steph was amazing. But then you started to read, ‘his game won’t translate, bad shot selection.’ Teams passed on a franchise-making player b/c they got scared. Do not be scared, draft Tua.” — @kevinwildes pic.twitter.com/dOyzIa8cVV

Former Pro Bowler and FS1 analyst Greg Jennings is in the same boat as Wildes, willing to bet the house on Tagovailoa’s success.

“Tua is a wildcard. But in most decks, the wildcard is the most important, the most elusive, the most exciting card. It’s a great thing to have. … I love everything about Tua.” — @GregJennings pic.twitter.com/Vy2DiXwvPN

And you can’t forget about his impressive collegiate records

Take this one for example: Tua finished his Alabama career with 10 more touchdown passes than anyone in Alabama history, despite starting less than two years and throwing 342 fewer passes than No. 2 on the list.

Partially due to records like that, Colin Cowherd still believes Tua should go No. 1 to Cincinnati.

“I think Joe Burrow is a very good player. I think if Tua remains healthy, he’s Drew Brees … Athletic, but really a pocket-passer with a perfect temperament.”

“The most captivating player in the NFL draft is Tua… I’m rolling the dice. He’s my number 1.”@ColinCowherd reacts to report that the former Alabama QB has been fully cleared: pic.twitter.com/oqqSIGT32H

Former Pro Bowler and Super Bowl champion quarterback Trent Dilfer – who has been mentoring Tua – thinks the best is yet to come for the Alabama legend.

“[Tua] looks as good, if not better, than he did pre-injuries.”

Yes, that was @DilfersDimes voice in the background of @Tuaamann workout video this week.

Trent Dilfer told us how he’s working with Tua Tagovailoa leading up to the #NFLDraft: pic.twitter.com/HfR3mfiCRc

With Tua’s health representing less of an issue as time goes by, some already have him as the No. 2 pick.

And with each passing week, it seems Cincinnati’s decision at No. 1 is getting more and more interesting.