We had a fun weekend and actually did something “normal” – we went out to dinner as a family! We used to have “Fun Family Fridays” a lot last year, but we hadn’t all four been out since February. Of course having a wild almost-two year old affects that, but of course we haven’t really been out that much since the pandemic began either. 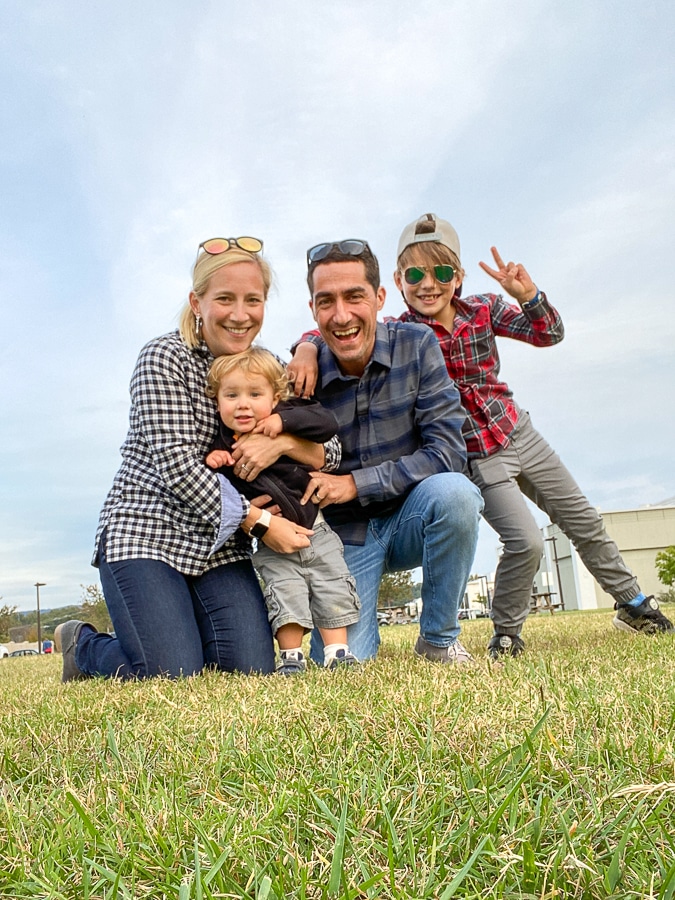 I knew we needed to get out of the house before the rain arrived for the rest of the weekend. We went to Champion Grill at Stonefield because they had an outdoor tent, outdoor seating, and green space for the kids to spread out. 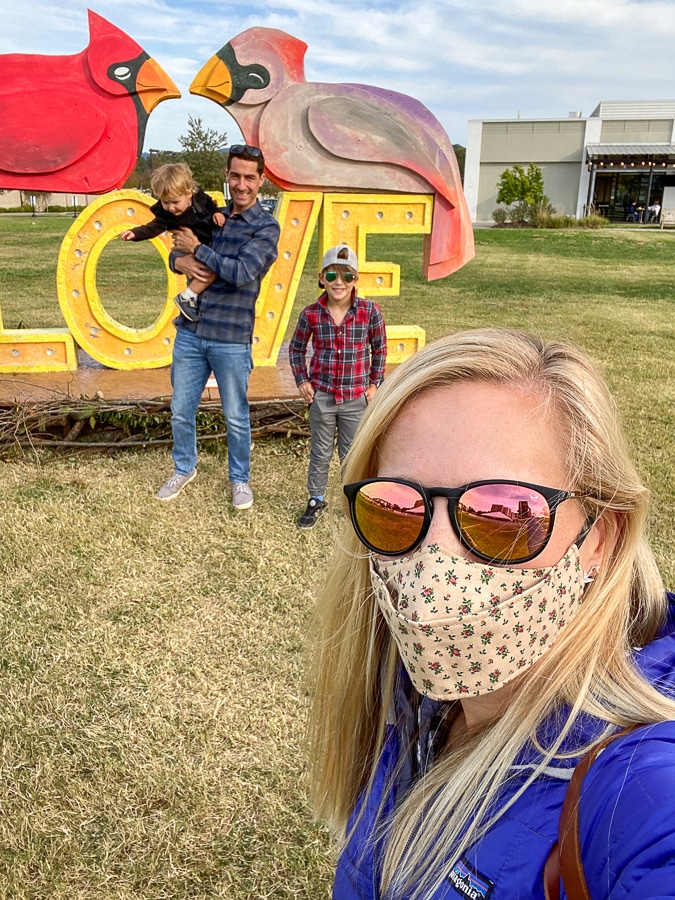 Mazen brought his cell to take some pics (it’s 10 years old with no battery life – lol!) I love this new teen look he’s sporting, but man they grow up overnight don’t they! 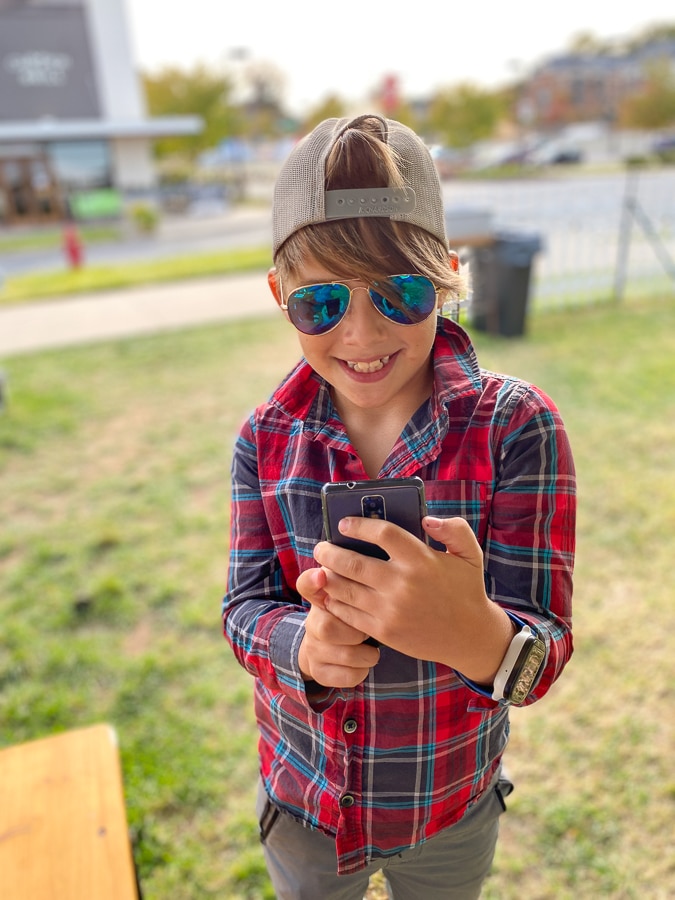 Mazen and I played word search games before the bros resorted to rolling in the grass. 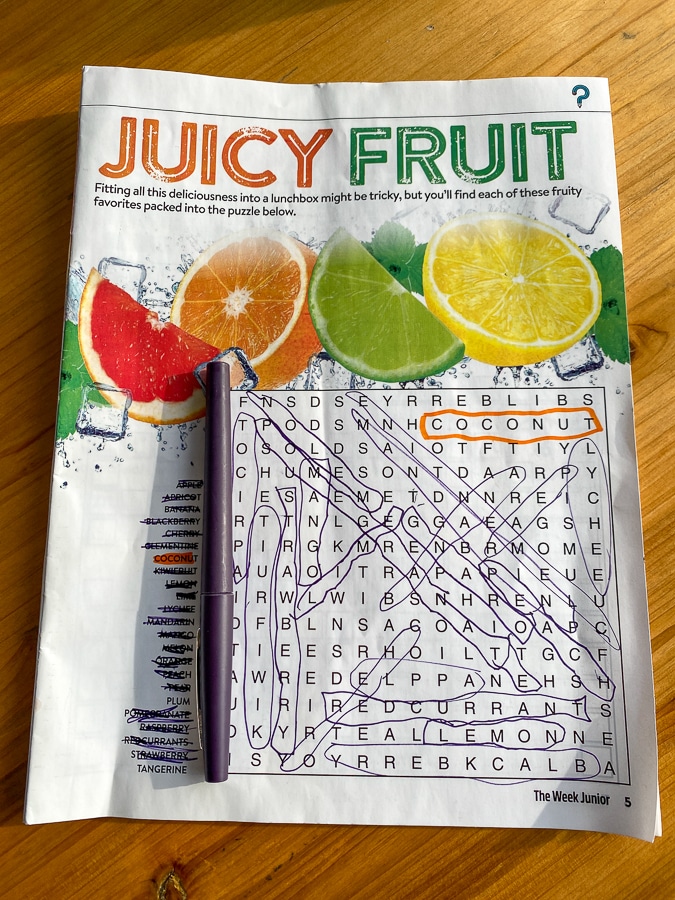 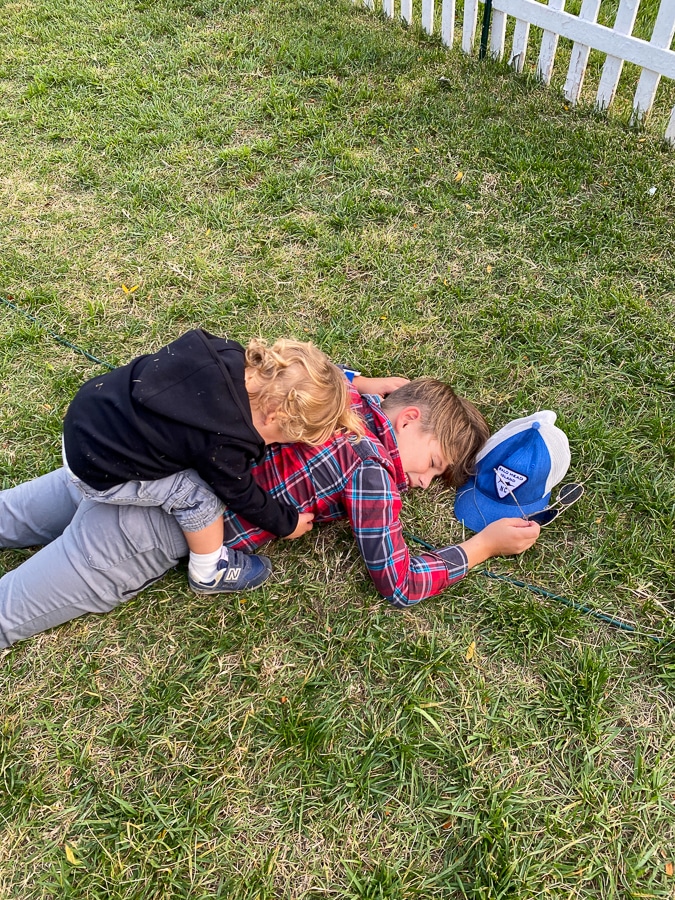 Brews + Sunset for the grownups! 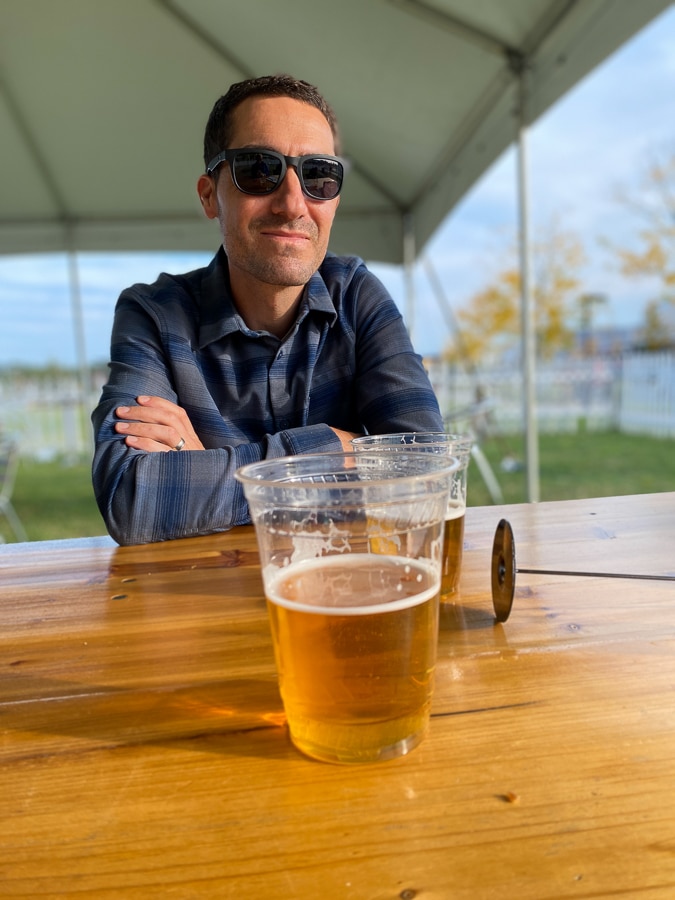 Photo by Mazen on a real iPhone 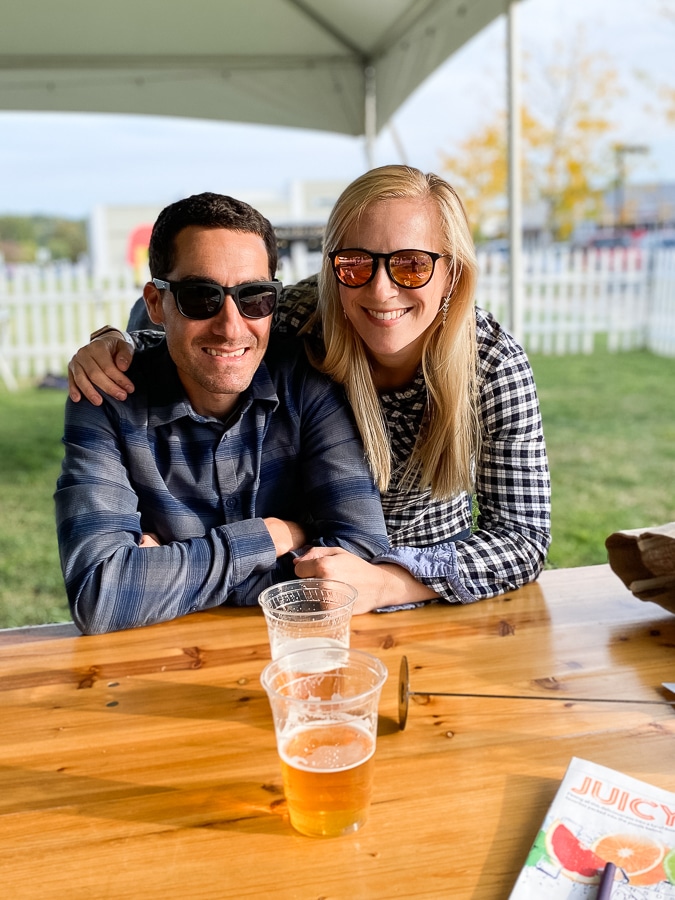 I ordered a spicy caesar salad and chicken dumplings. 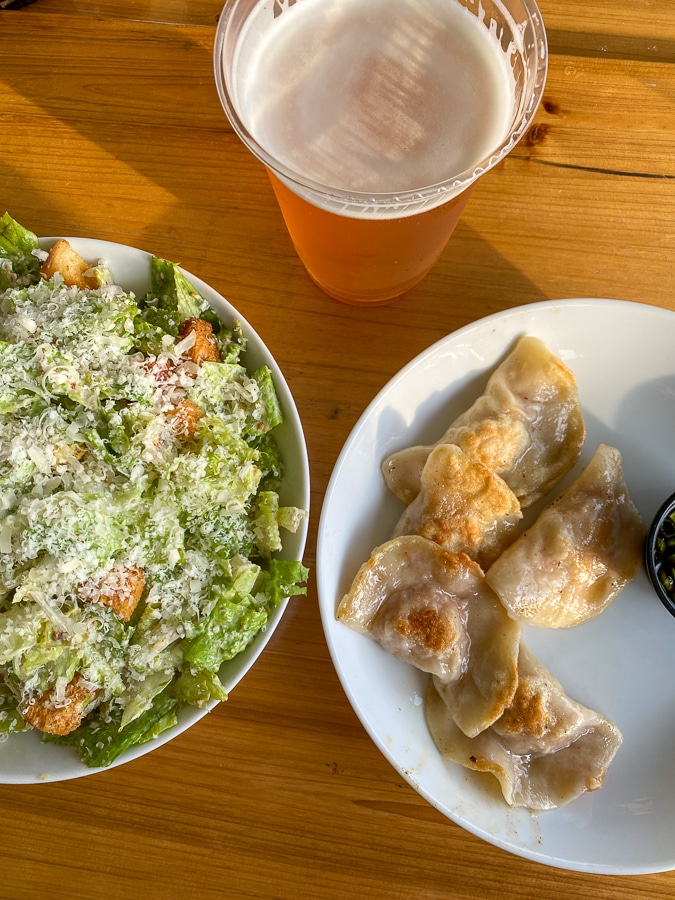 And we shared pretzel bites and fries! 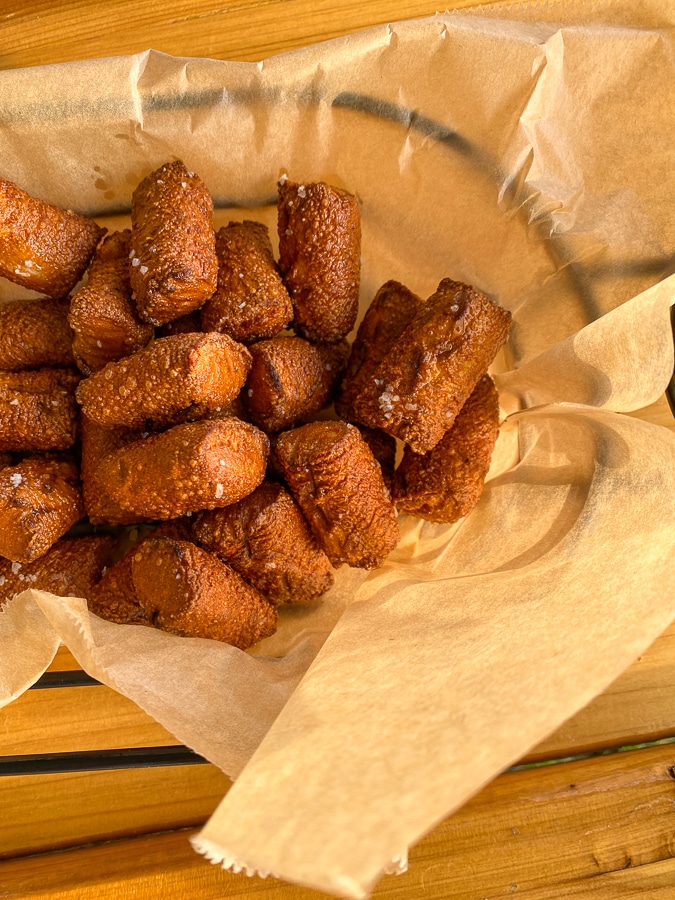 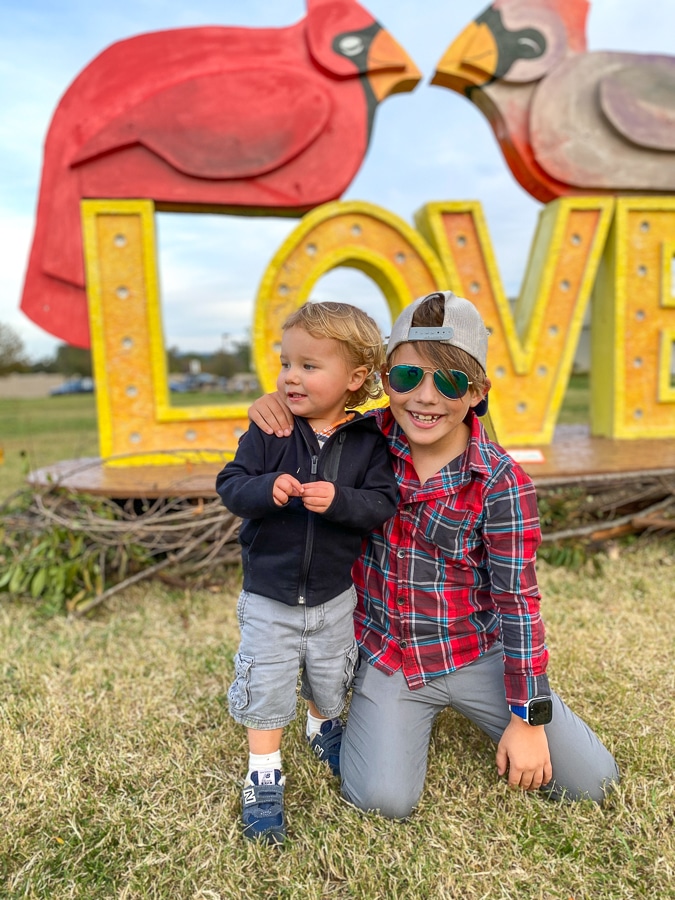 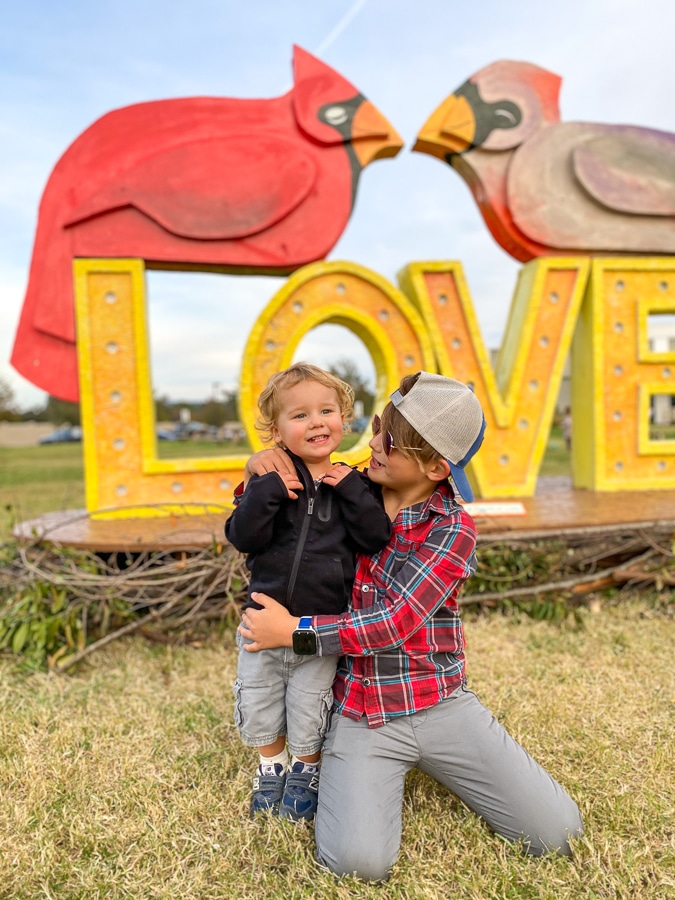 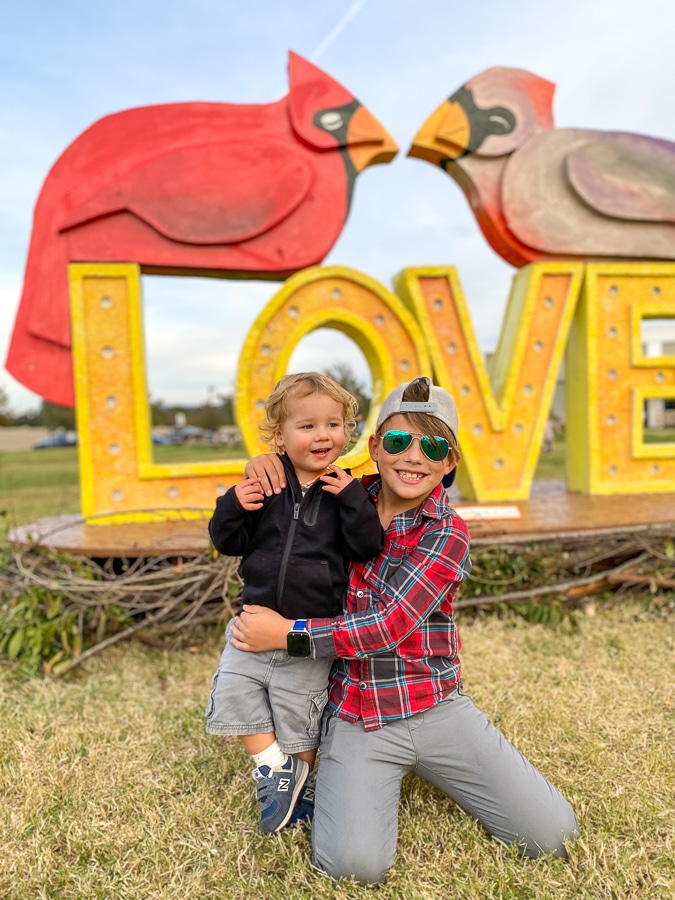 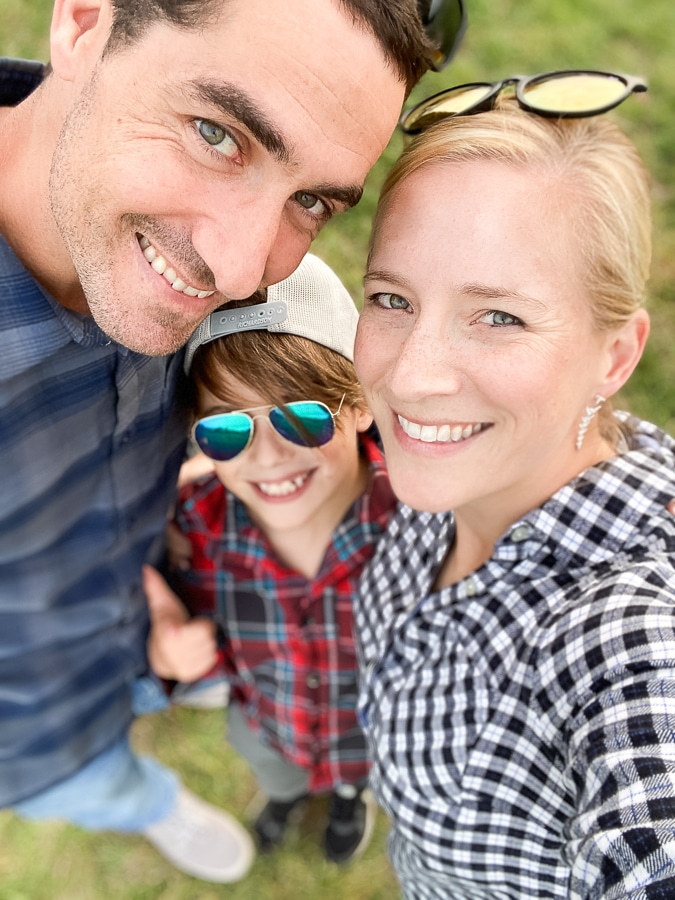 Bodos bagels and cream cheese for breakfast. I squeezed in an early morning workout in the basement – on our new Peloton bike (YES!) – full blog post about it coming later this week!!!!! Follow me @Katheats. 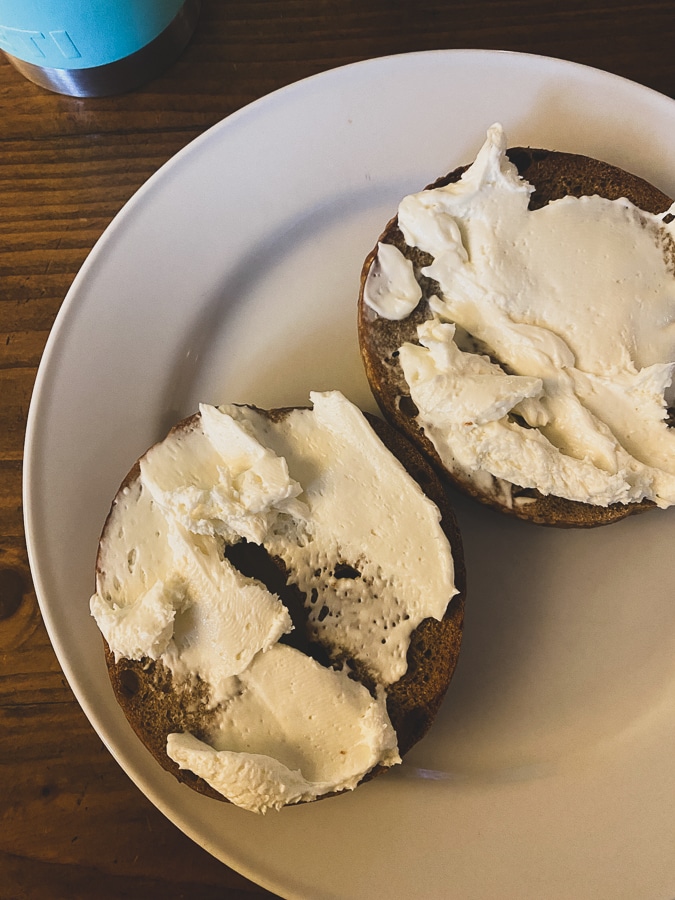 After showers and some rolling on the floor, we headed to Mazen’s soccer game in the rain. 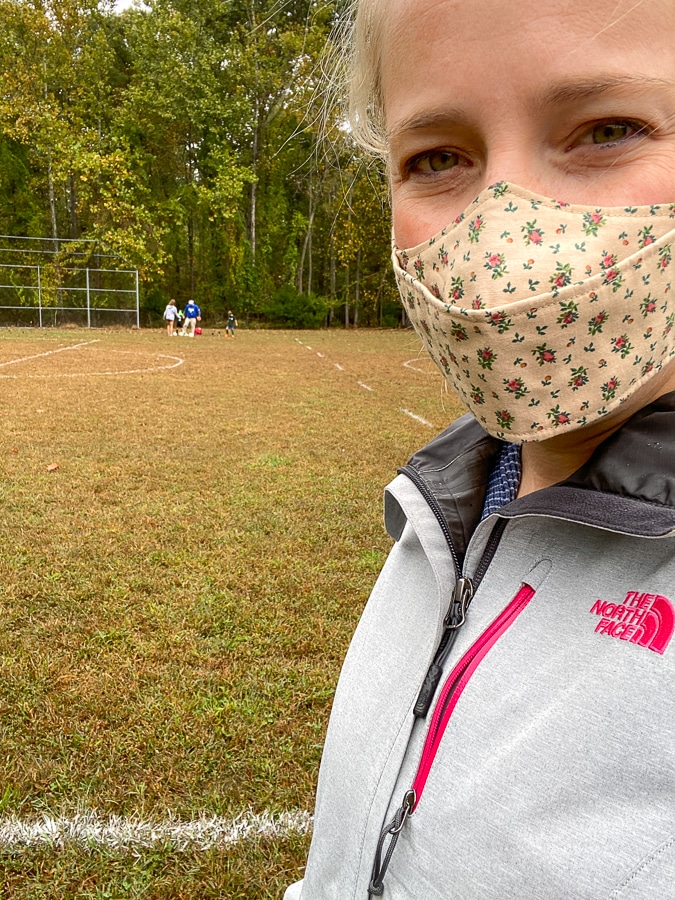 Raincoats and boots for all! Look at that face… 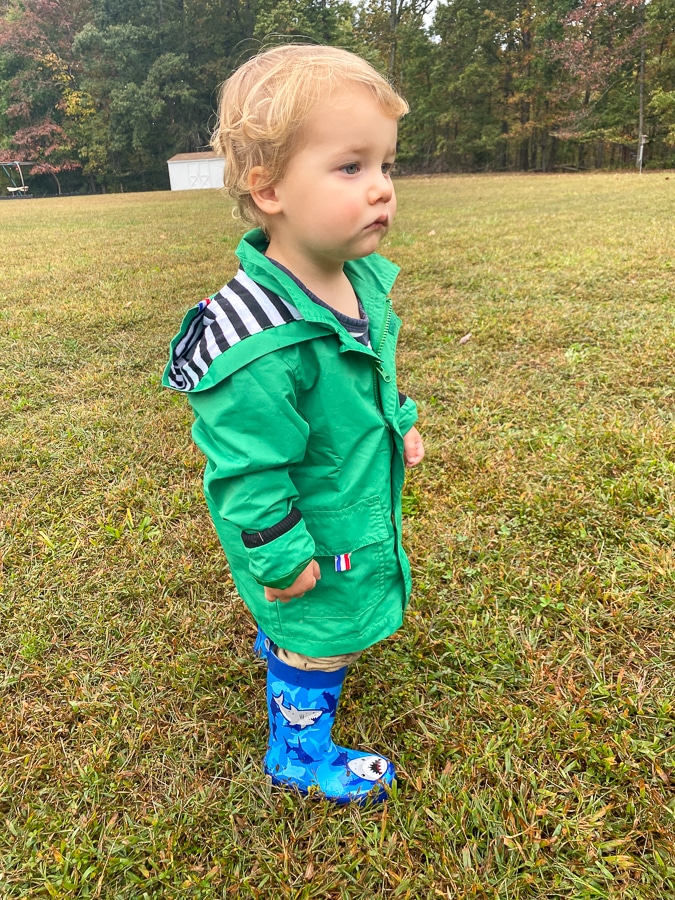 Back at home we did some art work and got settled indoors for the rest of the rainy day. 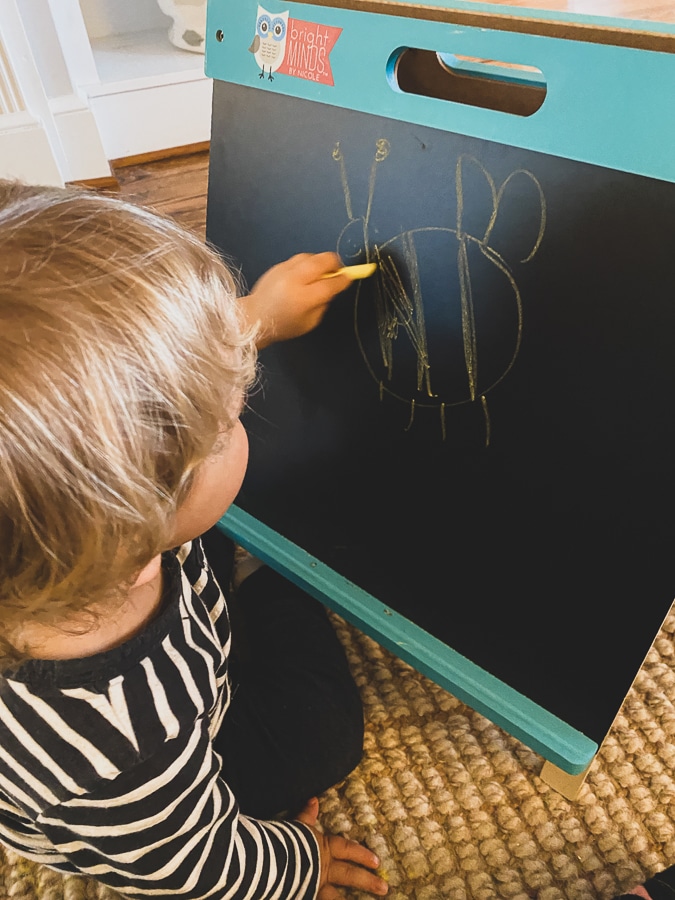 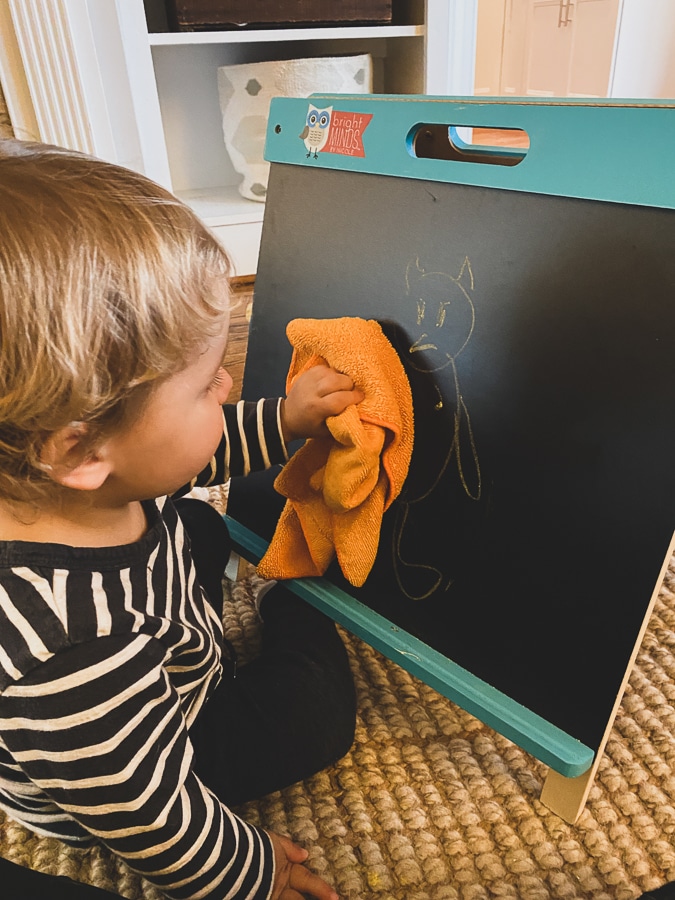 I have the BEST hair stylist! I’ve been going to Holly for a few years now, and at one point her salon offered small plates for light bites. When I inquired to whether those were still available she said no but she would make me lunch instead. I couldn’t say no!

She wowed me with two wrap halves, veggies and hummus (with an olive garnish) and homemade cheesecake! 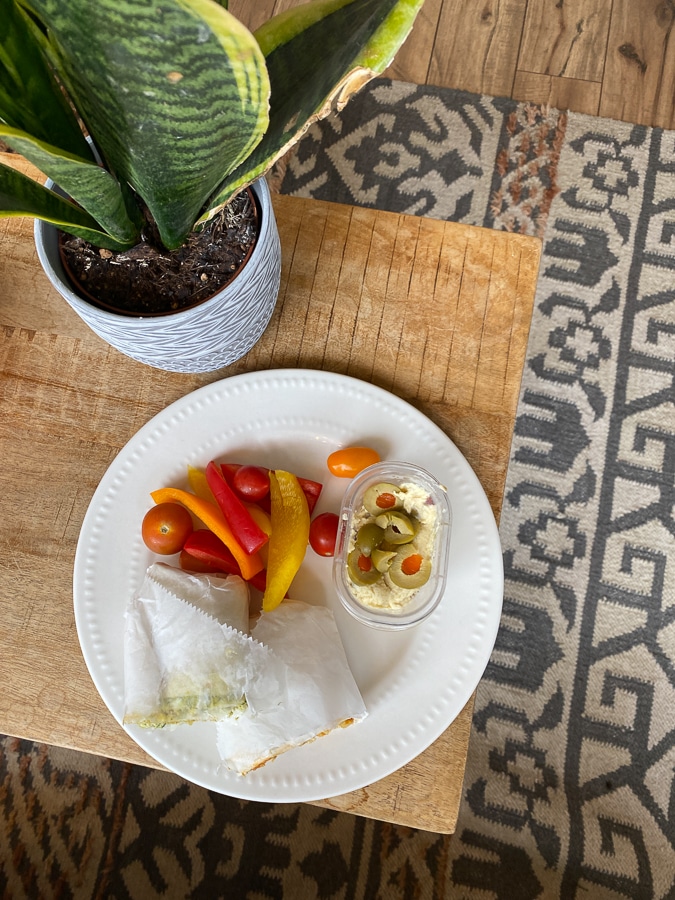 This egg salad was outstanding thanks to a dill “pesto” from Blue Ridge Pig. Must find! 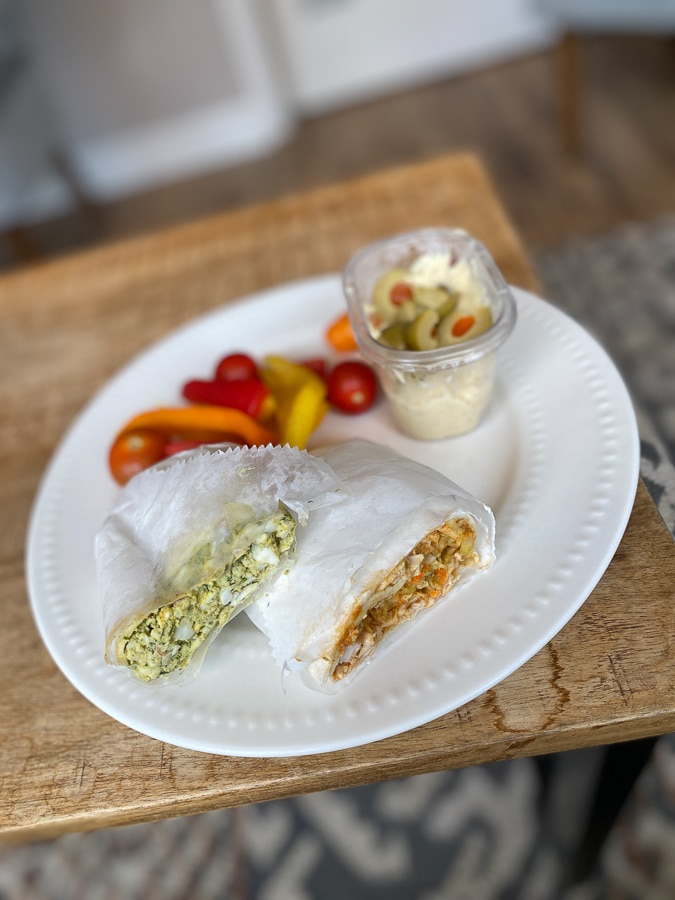 That white chocolate cheesecake was the perfect ending! 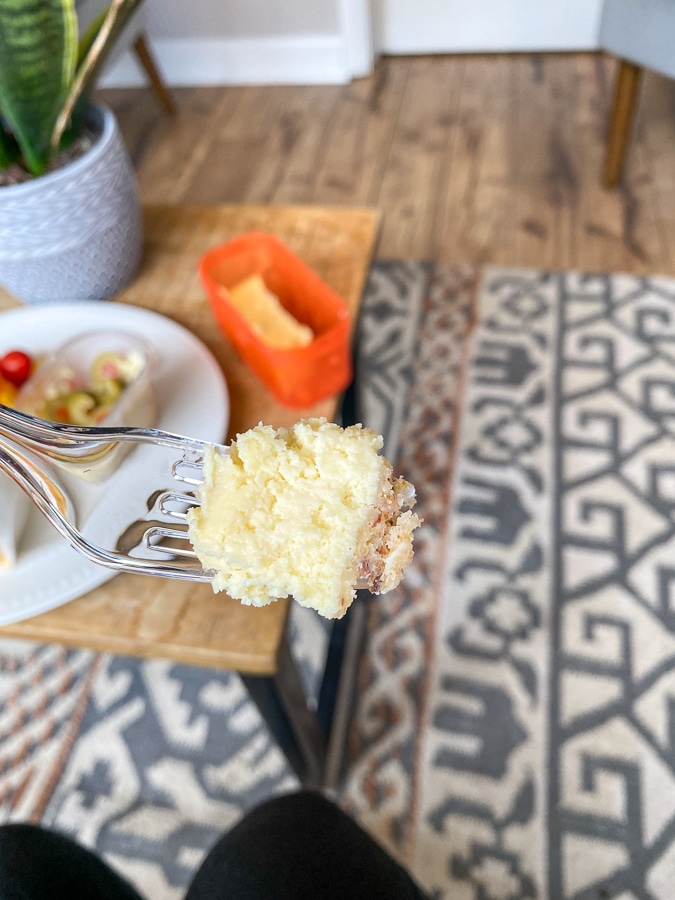 I went a little shorter this time! So much lighter.

But who will notice because I wear a ponytail or bun 99% of the time! 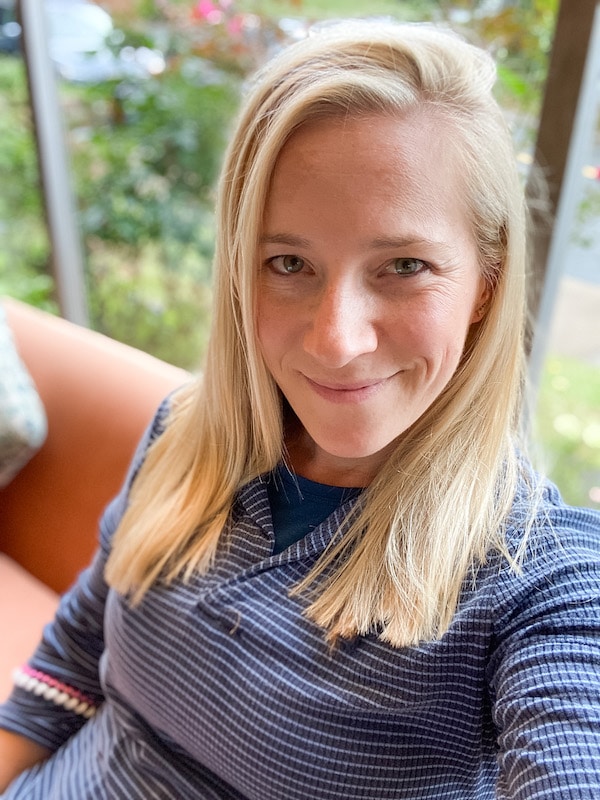 The rest of our weekend was spent relaxing with the kids – movie watching, pillow forts, the works. 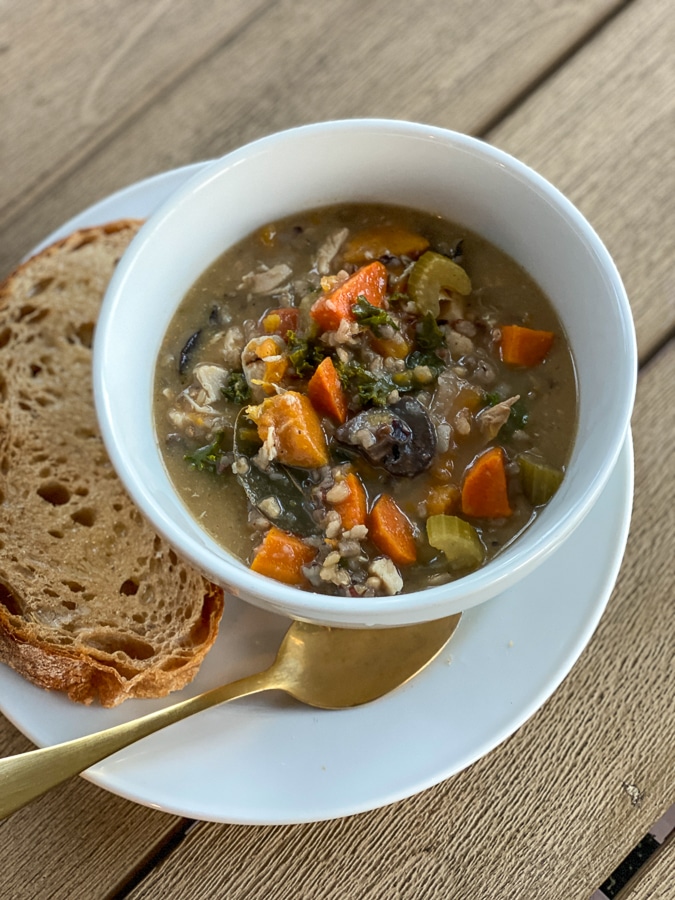 Hope you had a good one! 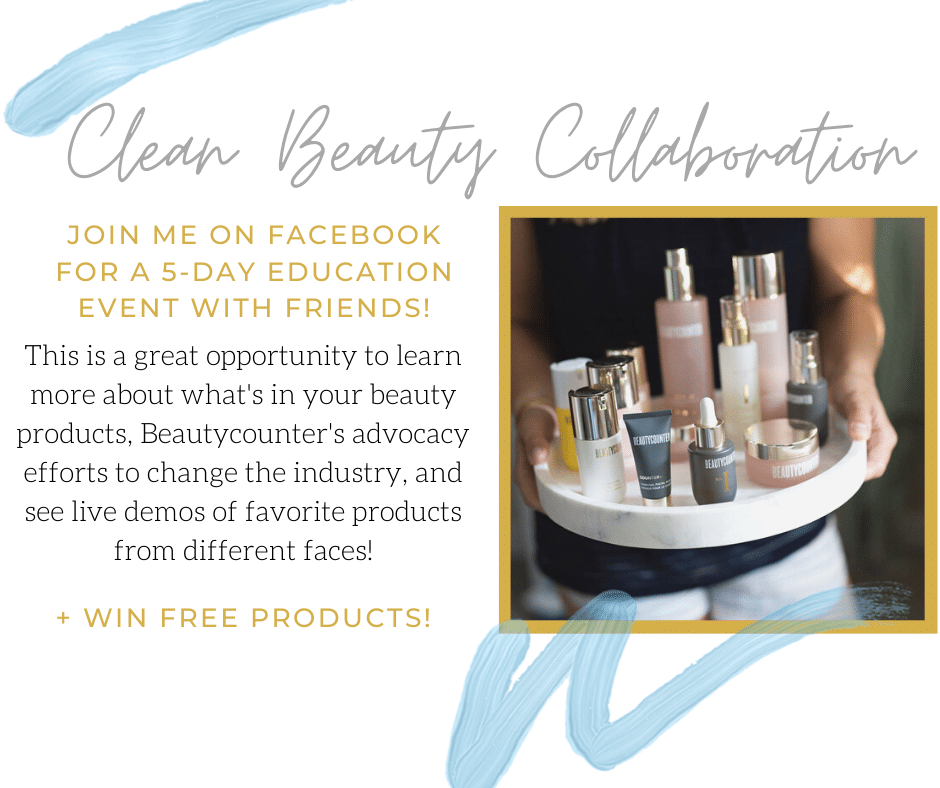 What the Heck is Hormone Safe Skincare?
Our Hemsley + Hemsley Café at Selfridges Says Goodbye