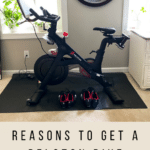 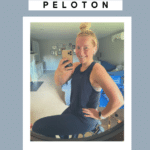 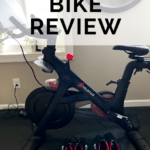 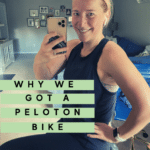 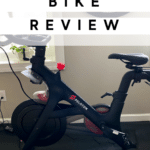 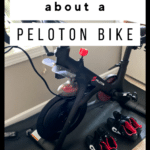 I resisted getting a Peloton Bike for a long time – until I realized that the benefit is in the community more than the bike itself. With a recent price drop on the first model and plans to work out at home for the foreseeable future, we decided to go for it and we’re SO GLAD we did! Here are my reasons to get a Peloton Bike.

Why did we get a Peloton Bike?

When the world shut down in March, Thomas casually asked me if we should get a Peloton Bike.

But as spouses do, he had planted the seed. As the summer went on, and I realized that home workouts were going to be a long-term plan, I started to think about it a bit more.

I paid more attention to friends talking about them on Instagram. I read blog posts by friends about what makes them cool. The realization that we definitely weren’t going back to the gym this winter sunk in.

And I admitted that I had no low impact options for my foot when it was stiff from too many soccer games, runs, and walks.

Before the gym closed, I usually went to one cycle class a week. Thomas went to maybe 1-2 a month. But neither one of us would be labeled a cycle fanatic. I actually was a cycle fanatic the year of my foot surgery (2005-2006) when I couldn’t do a lot of weight bearing sports.

So with all of the above reasons to get a Peloton bike, we brought the convo back up late in the summer and decided to get the bike.

Literally a week after we decided to get the bike, they dropped the price by $350. Bike+ was announced at $2,495 and the original model was now $1,895. I compared all the features of the two models and decided to go for the less expensive one. That sealed the deal! We had to wait about a month for the bike to be delivered. Delivery was free and seamless once it arrived. It only took about 20 minutes.

Should you get a Peloton Bike + or The Original?

Like I said, the Original bike is $600 less. I think it’s worth the savings!

This means you can hop off the bike and do a strength segment or stretch and see the instructor. This was the #1 reason we considered the new bike, but I didn’t think it was a $600 difference so we decided against it.

Again this would have been nice, but I didn’t consider this a dealbreaker and still don’t – see my comments on headphones below.

When riding the Bike Original you have to control the resistance knob yourself. On Bike+ it moves FOR you. I think this is really cool, but both Thomas and I agreed that we might not like that because they might make it too hard!

Finally Bike+ can connect with your Apple Watch to show heart rate stats right on the screen. Again that would be nice, but looking down at my watch isn’t a $600 big deal.

The Peloton App Is Top Notch

I also started a free trial of the app so I could test out some of their other class offerings. I hooked up Thomas’s old Apple TV to stream the Peloton app on my big TV in the family room. The variety of classes is totally impressive, and I love the stats and polished format. I knew we’d be paying for the app, and so I was glad to be able to use it off the bike too. I’ve tried the strength classes, meditation, yoga, treadmill, bootcamp, stretching and outdoor running. It’s now our home gym, all in one. (I do need to buy a set of 10 and 20 pound weights at some point to really feel complete.)

There is a monthly membership of $39, which includes both of our bike accounts plus the app access anywhere (Apple TV, Roku, your phone, tablet, etc.) Don’t tell them I said this, but I think they could easily charge twice that and people wouldn’t blink an eye. If you have a bike, the membership is well worth it. Even if you don’t have a bike, I don’t think it’s a high price if you’re primarily using this as your primary fitness solution. I will say that if all gyms were open as usual we probably would not have purchased the bike. But now that we have, we’re so glad we did. (More on the benefits of not having to travel below!)

Here is the gear we got with our bike

We ended up getting one of the bundles you can add on to the bike purchase, and I would recommend that you just buy what you need a la carte.

A friend gave me one of her $100 codes to put towards the gear, so that brought down the cost. If you would like one of mine, it’s 373W2P.

So…what’s so great about the Peloton Bike?

This is where the magic happens! I didn’t realize that so much of the Peloton hype was about the community of other riders.

If you are at all competitive, you need this bike! I am, and boy does that make a difference in home workouts.

You can compete with:

Shout out to Mary’s Whole Life and Mama Vaughan!

You can also high five people who are there live whether or not it is a live class. For example, a friend and I were both on our bikes in the same class at the same time even though we started at different times and the class had been recorded a week earlier. It was so cool to race her right there on the spot.

I had no idea so many of my friends had bikes until I started looking – it’s really fun to be social, especially during quarantine.

If you want to look for me, I’m @Katheats!

The classes have all the pros of going to a live class in person with non of the cons. There is no commute, you can hop on the bike at the exact time you’re ready, you can choose your instructor, you can even choose your music. When have you ever seen an all country themed ride at a public gym? NEVER. I love that there isn’t just one token country class in the Peloton library or one song here or there but over a hundred in the library! You can find so many different styles of music, instructor, and class format. Some days I want to bop to country and some days I want to grind to some hard core hip hop. I love that you can choose in the moment.

I also get super sweaty during these workouts and that’s because the room isn’t freezing! My #1 complaint of group fitness is that other people want the room freezing with the fans on full blast at all times. I’m cold natured and always cold at the beginning and end of group ex workouts. Not in my house baby! No fans, temp warm = sweat pours out in the very best way.

I never sweat this much at the gym!

Obviously Cody Rigsby, who seems to be everyone’s favorite! He’s hilarious and plays fun pop music. (I especially enjoyed his Lady Gaga ride.) I also really like Alex Toussaint. I took one of his hip hop classes and was really motivated (kids in the room warning: he swears!) I’ve taken classes by Ally Love, Hannah Frankson, and Robin Arzon but I prefer the men to the women! (And surprise, surprise, Thomas likes the gals best!) I am only a few weeks in, so I will have to report back. I honestly want to ride the bike every single day, so I need to try to remember to keep my workouts diversified so I don’t burn out! It’s so fun though, and I look forward to each workout the second the previous one ends!

Our Bike Will be Moving

Right now it’s currently in an open area of our downstairs family room next to a window.

This spot works just fine, however, my handyman Thomas suggested we insulate our utility room and add a mini split AC/heat unit and turn that into a little fitness room. Brilliant idea! The treadmill will go in there too along with a springy floor mat. He’s doing the work slowly and so I don’t know when we’ll move it in, but I’ll keep you updated!

If you’re wondering if I regret getting a treadmill first, my answer is “a little.” I used it a ton when Birch was an infant because it was my only workout option. Now I use it as a walking desk and the occasional run, but if I would re-write history I do wish we’d just gotten the Peloton Bike from the start. I still love the treadmill itself, but I defer to outdoor runs and now bike rides before indoor runs. But since it’s here, it’s here to stay! And I just have to commit to using it as a walking desk more and and more : )

That’s all I have for updates for you guys!

Ask any questions in the comments. And if you have a bike, share what you like best about it too!