Enjoy these Maple Bacon Brussels Sprouts as a holiday side or winter weeknight dish. Packed full of flavor from fresh orange and smoky bacon, these bacon brussels sprouts can be easily made in the oven or stovetop and will not disappoint.

I like to believe that anyone who says they “don’t like brussels sprouts” just hasn’t made them correctly… I know that’s not true but if you are steaming or boiling your brussels, you’re doing it wrong. Ha! In all seriousness, you probably can’t go wrong but I have to say… this recipe is my favorite way to fix brussels sprouts. Add some bacon and complimentary sweet flavors and you’ve got yourself a winner. 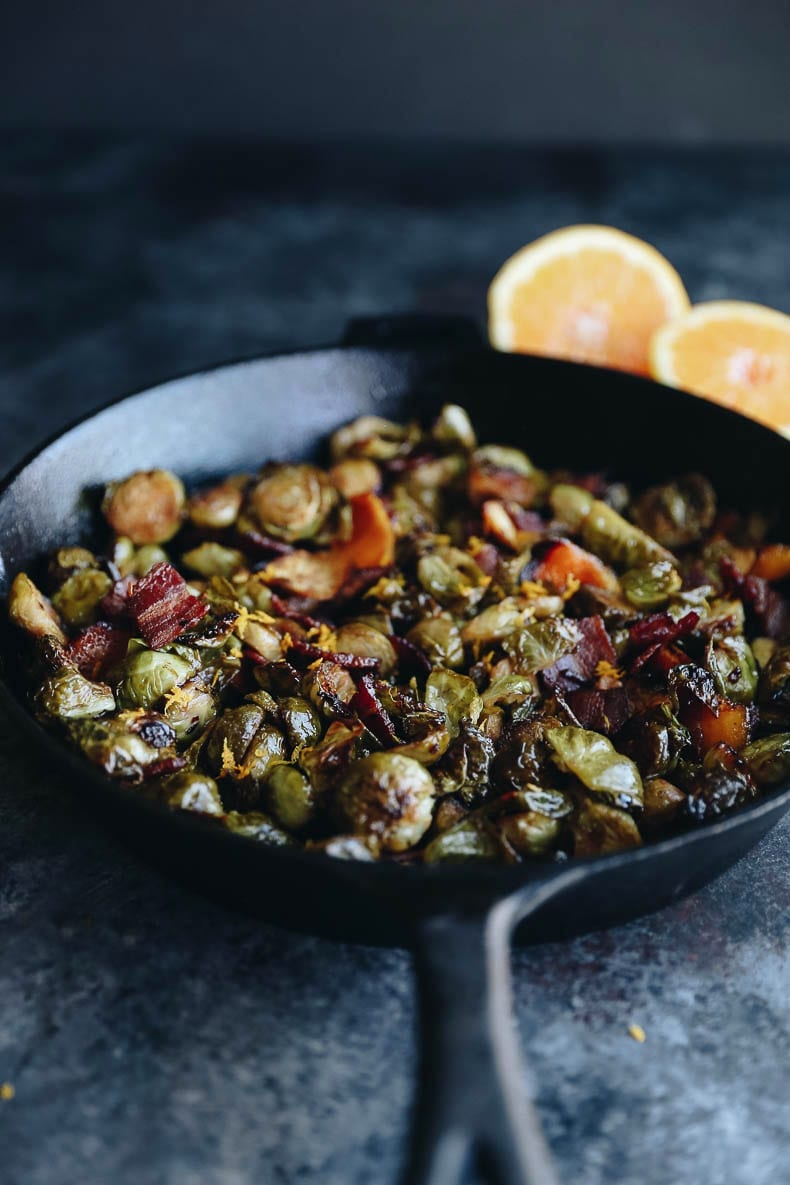 How to Prep Brussels Sprouts

First things first, let’s chat about picking out the best brussels sprouts at the store! If you ever see sprouts on a stalk, grab them! These will stay the freshest, the longest. Keep them on the stalk until you’re ready to use them. If you don’t see stalks there are usually two other options in the store: prepackaged brussels sprouts or sprouts sold in bulk. Either works great, just be sure to look for firm, green sprouts without holes or major discoloration.

When you’re ready to prep them, give them a good rinse in a colander. Use a paring knife to cut off the bottom, hard stem. Remove any discolored or shriveled outer leaves. Cut the sprout in half lengthwise and set aside. 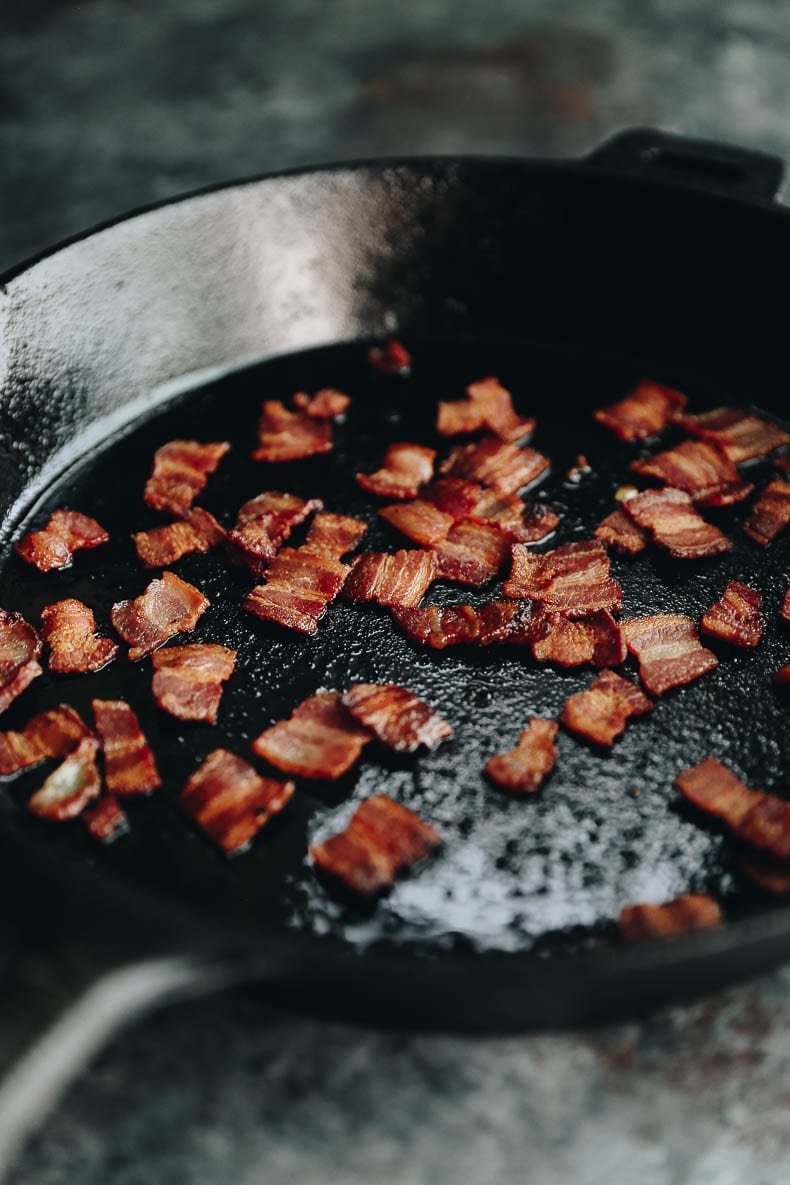 How to Make Roasted Brussels Sprouts

STEP 1: Wash and dry your oranges. Remove the rind of one orange using a paring knife. Try to just get the rind and not much of the pith (the bitter white layer).

STEP 2: Juice the orange that you peeled and set aside. Zest the second orange and set the zest aside.

STEP 3: Chop the bacon into bite sized pieces and cook in a cast iron pan over medium high heat until you have crispy bacon pieces. Remove the bacon pieces and place on a towel lined plate. Pour the bacon fat into a small bowl or jar and set aside.

STEP 4: Prep brussels sprouts according to instructions above if you haven’t already. Place the brussels, orange rind and juice, 6 tablespoons of bacon fat, chili flakes and maple syrup into the cast iron skillet. Season with salt and pepper and roast at 425ºF for 40 minutes, flipping halfway through.

STEP 5: When the brussels are nice and crispy, remove from the oven and finish by adding the red wine vinegar, orange zest and bacon pieces. Toss everything together and serve.

What if I Don’t Have a Cast Iron Skillet?

You can still make these brussels sprouts if you don’t have a cast iron skillet. Start by cooking your bacon in the oven with this easy tutorial. After the bacon is roasted, spread the brussels sprout mixture on the sheet pan and cook for the same amount of time as listed above. Finish with the orange zest, red wine vinegar and bacon and you’ve got a delicious side my entirely in the oven. 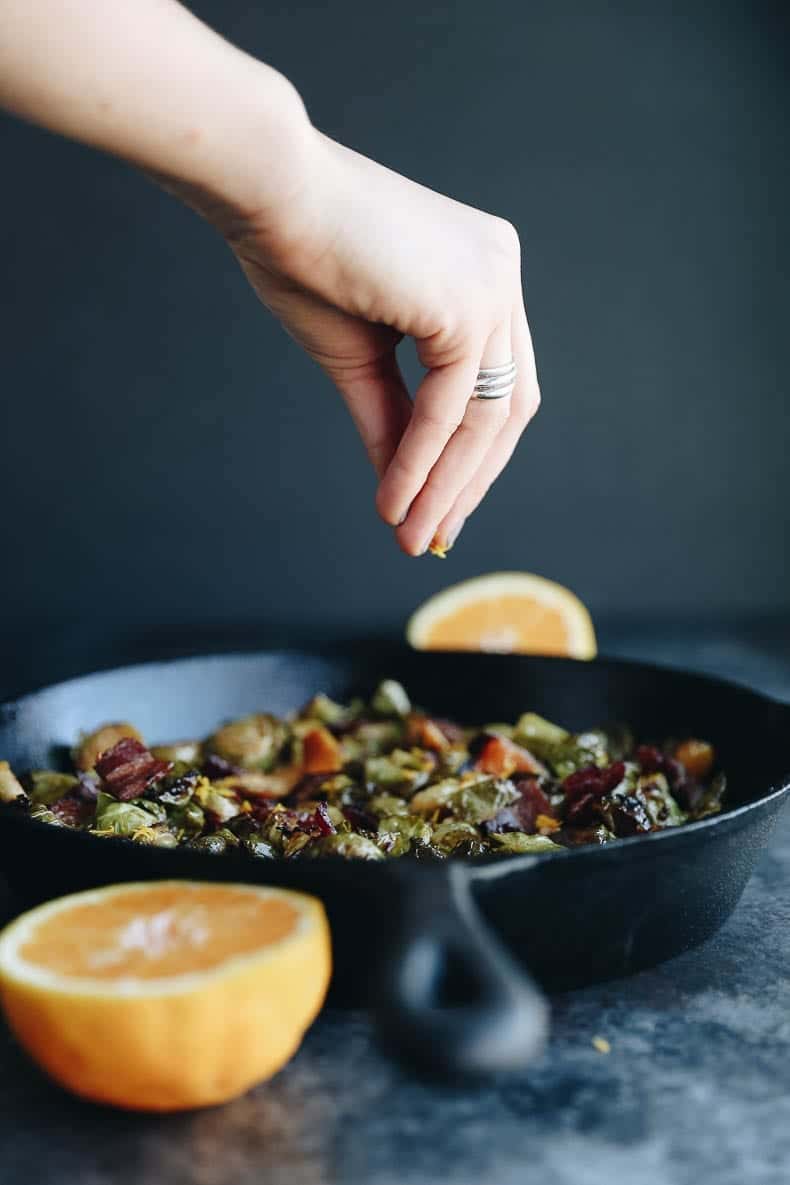 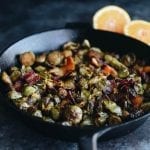 Enjoy these Maple Roasted Brussels Sprouts with Bacon as a holiday side or winter weeknight dish. Packed full of flavor from fresh orange and smoky bacon, these bacon brussels sprouts can be easily made in the oven and will not disappoint. 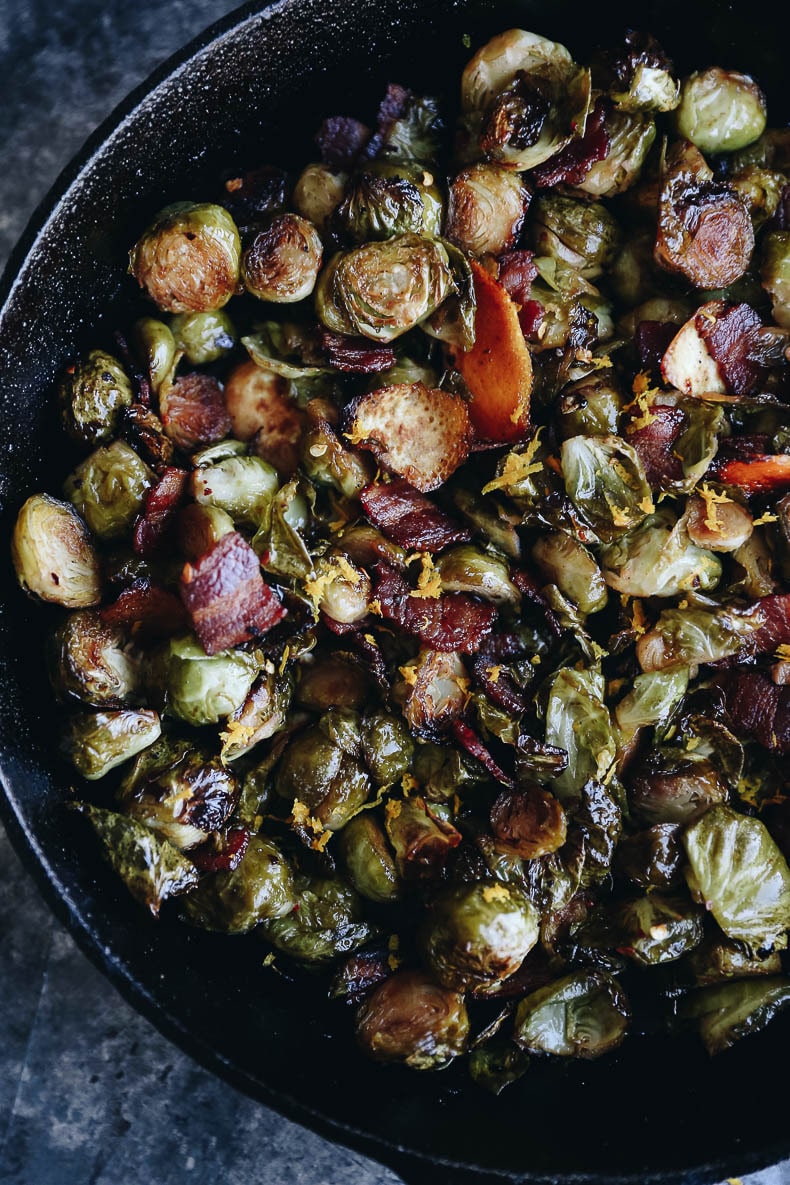 Join 20,000+ members of the THM Community to get access to exclusive recipes, healthy lifestyle tips and behind-the-scenes news from our team!

Success! Now check your email to confirm your subscription.