On January 20th, 2021, I became a mama to the sweetest doll baby. Max Asher came into the world at 3:39pm, a whopping six pounds thirteen ounces of absolute deliciousness.

I had a strong feeling (or perhaps just a strong hope?) that #babyganoush would arrive well before his due date. My sister had both her kids 10-12 days early and my mom had us early, too.

Pregnancy was such a wild ride after I was diagnosed with a rare condition called Vasa Previa, requiring me to be admitted to the hospital at 32 weeks during the peak of Covid (more in this post). I was fully expecting to spend the rest of my pregnancy at the hospital and deliver via c-section at 36 weeks.

A week before I was scheduled to deliver, the maternal fetal medicine doctor decided to order one last vaginal scan and discovered that I actually did not have vasa previa (more details in this post). They explained that this meant I did not need to deliver early and that I could proceed with a normal vaginal delivery.

I think I had some kind of mental breakdown afterwards because I felt all tingly and could barely talk before I started to cry uncontrollably. I left the hospital feeling pretty upset about the misdiagnosis but also incredibly grateful that Max could come on his own time. 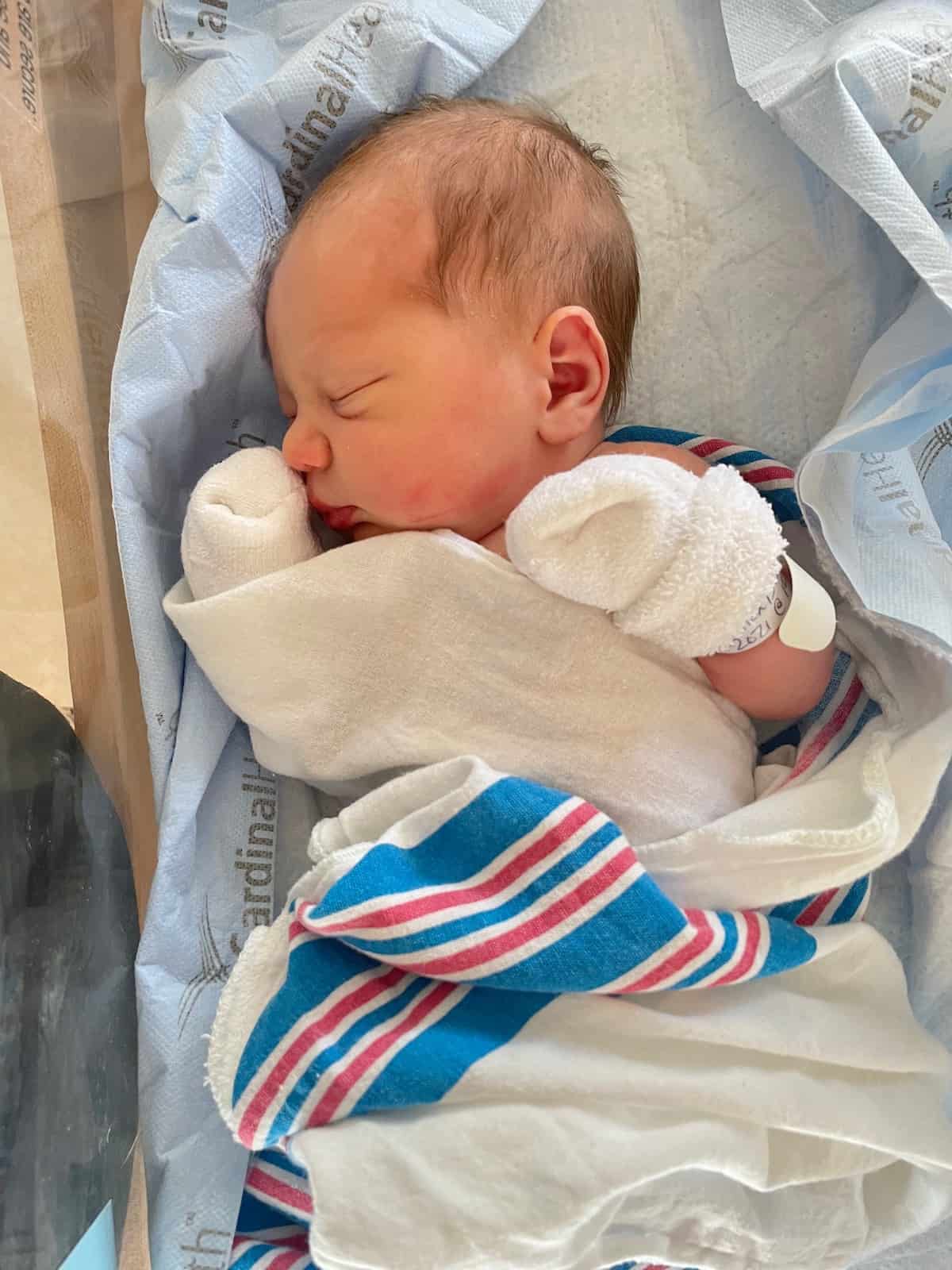 Fast forward to 38 weeks and 2 days pregnant. I woke up to go to the bathroom at 1am on January 20th and felt a gigantic rush of fluid. I woke Jeff up right away and told him my water broke. I called my midwife and the nurse told me to get ready to head to the hospital within a couple hours and confirmed that I wouldn’t be coming back home. I learned that once your water breaks, you have to deliver within 24 hours to avoid infection.

We made PB&J’s, grabbed our hospital bags, and headed to the hospital around 3am. I felt like my water broke another three times from when it first did to when we were in triage–it was crazy!

I had my first cervical check which revealed I was pretty much zero centimeters dilated. I hadn’t had any other symptoms beyond my water breaking up to that point, but I was starting to feel some very mild cramping. The nurse said they may put me on Misprostol if contractions didn’t begin on their own. 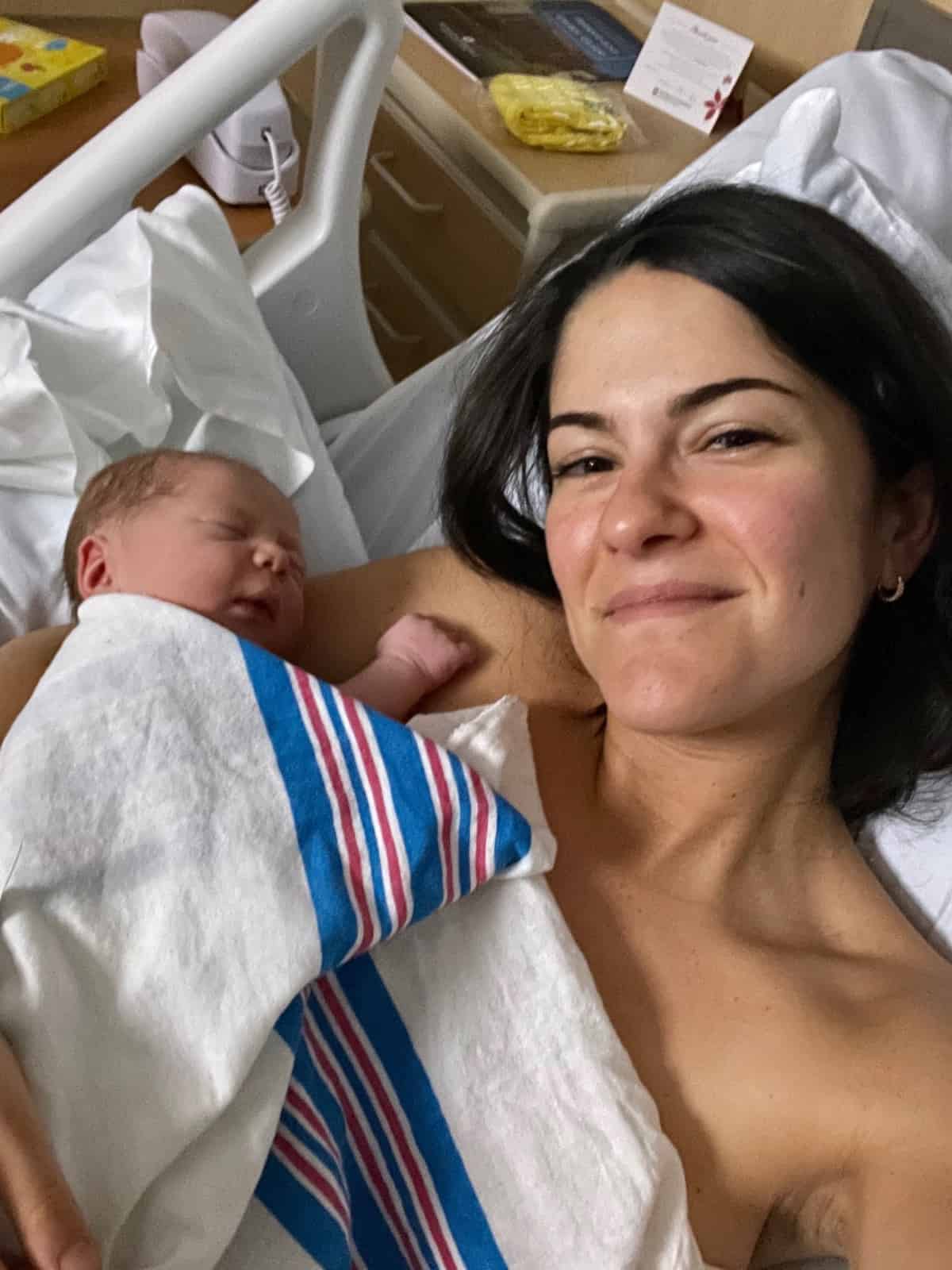 I ate my sandwich, which was a super good call since I wasn’t able to eat anything until after delivery. After a couple hours of uneventful hanging out, they moved us to a labor and delivery room around 6:30am. It had a very peaceful vibe, almost like a hotel meets a hospital room. I got tested for Covid and at that point, I was still just feeling mild cramping.

The labor and delivery nurse was so sweet, and her and the midwife explained that they’d start Pitocin soon to induce labor. Pitocin is the synthetic form of the hormone Oxytocin, which encourages the uterus to contract. It unfortunately produces extremely strong contractions.

I didn’t have a birth plan other than knowing I wanted the epidural and most of the other standard procedures. I never felt the desire to have an unmedicated birth; all that mattered to me was a healthy baby at the end. I know myself and that I have a very low pain tolerance. 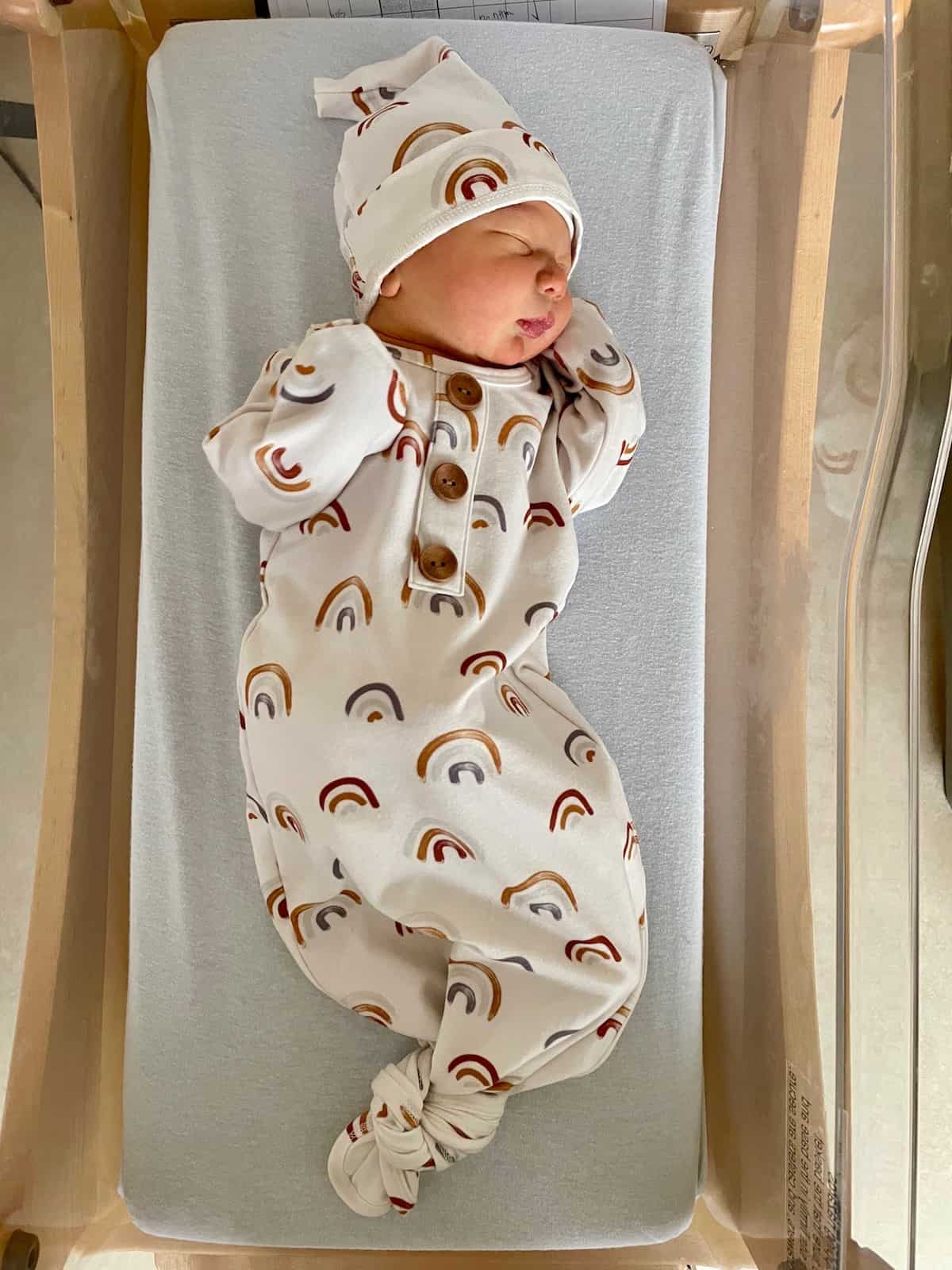 The nurse said I could get the epidural at any point, before the Pitocin or after. I told her I wanted to experience a real contraction before getting the epidural. I will not make the mistake of waiting with the next baby!

As soon as the Pitocin kicked in, the contractions began and holy moly, were they horrific. I didn’t know what to expect but I’d heard horror stories about the drug making contractions more intense.

The cramps were indeed crazy painful and very close together. I squeezed Jeff’s hands for dear life every time one came and tried my best to breath through them. But soon after they began the Pitocin, I started begging for the epidural.

The anesthesiologist came in really quickly and started doing his thing. It wasn’t too painful besides the discomfort of feeling the medicine flow through. I was so distracted by the contraction pain that the epidural felt like nothing. All I could think about was how I’d survive the next round of contractions. 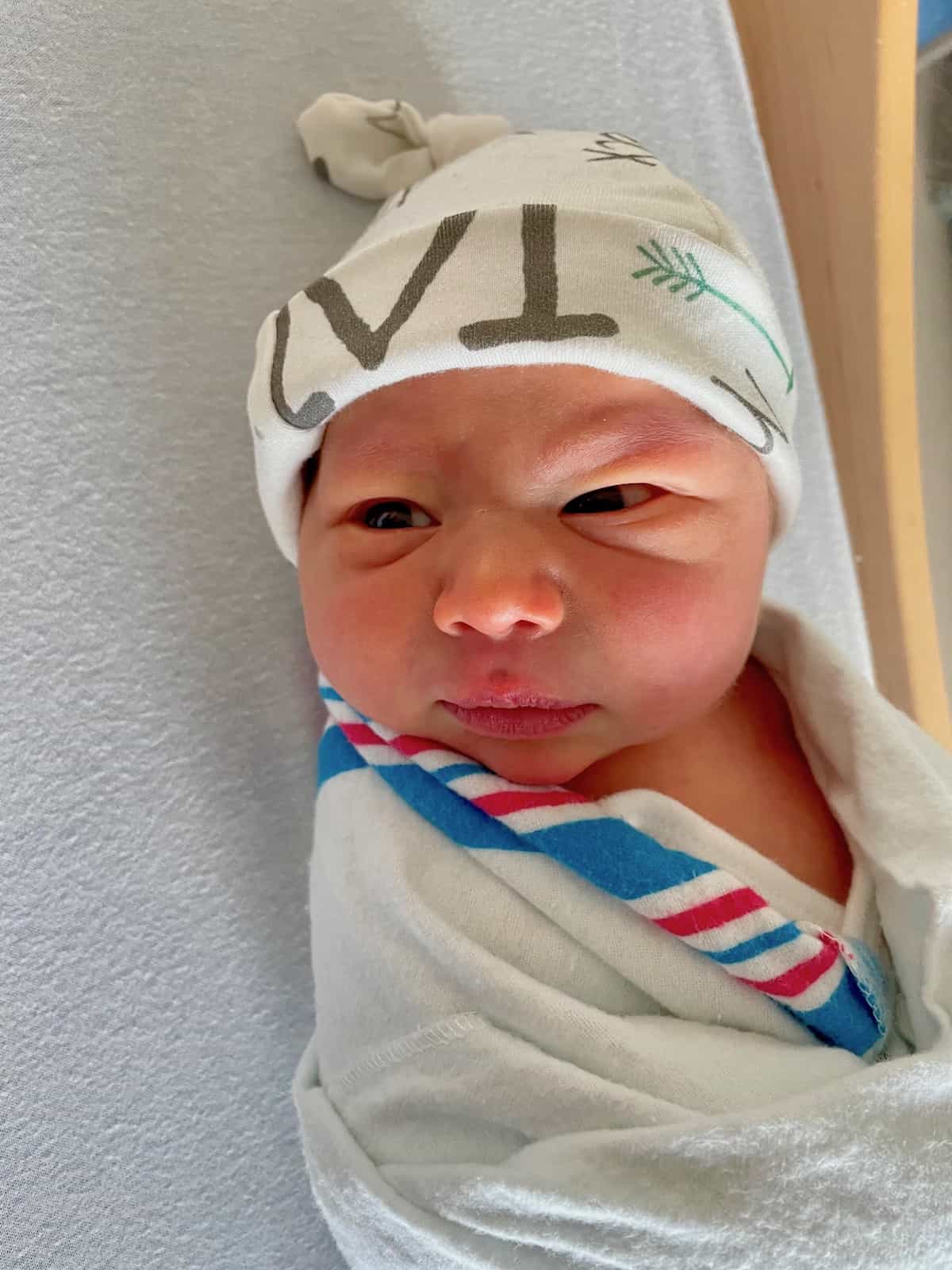 Once they were finished, I started to feel numb in my belly but it was as if the contractions moved to my butt. This was the worst part. I kid you not…I felt like this baby was going to come out of my behind! It was unbearable and I told the nurse that I felt as if the epidural only numbed my stomach. I starting sobbing in fear that I was going to feel the entire labor.

We tried increasing the flow but I still wasn’t feeling relief. The anesthesiologist came back in and confirmed that the first round must not have been effective so they tried again. I felt so discouraged and was super scared that I’d never feel numb. Meanwhile, the contractions intensified.

Fast forward a bit and I still am not feeling relief in my bottom half. They decided to add more medicine (I think it was lidocaine?) to see if a different drug would get the job done. They wondered if the medication wasn’t able to keep up with how close together and intense the contractions were getting. At some point during this madness, I was 3 centimeters dilated. 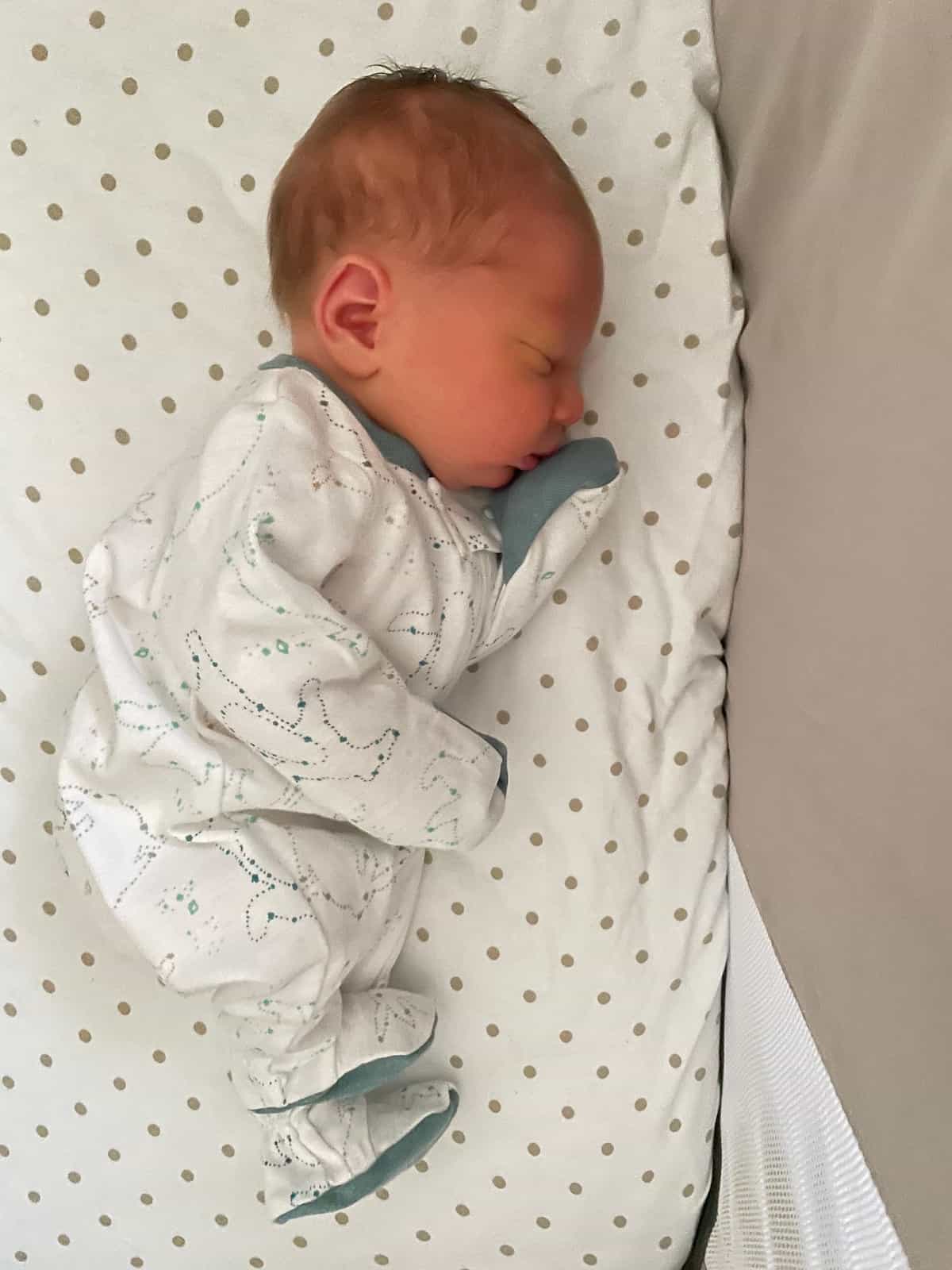 And FINALLY….sweet relief! My entire body started to feel warm and fuzzy and it felt like straight euphoria all throughout my body. I wanted to kiss the anesthesiologist! Straight bliss, I tell you. The contractions now just felt like pressure. They checked my cervix again and I’d gone from three centimeters to eight centimeters within an hour. Baby was coming quick!

Around 1pm the midwife came back in and said she’d come back at 3pm to check my cervix again. We put on Peaceful Guitar on Spotify, Jeff shut his eyes, I texted my family and friends an update, and then I ate a delish cherry popsicle. I could not get over how good I felt compared to thirty minutes ago.

At 3pm I was ten centimeters dilated. She checked my cervix and exclaimed, “I can feel the head, let’s start pushing!”

I remember thinking how intimate the birthing experience felt. It was just me, Jeff, my midwife, and the nurse and it felt very serene. I always thought labor would be in this crazy sterile room with ten doctors surrounding me. I’m sure that’s the reality in some situations, but I was so pleasantly surprised how low key the laboring felt. 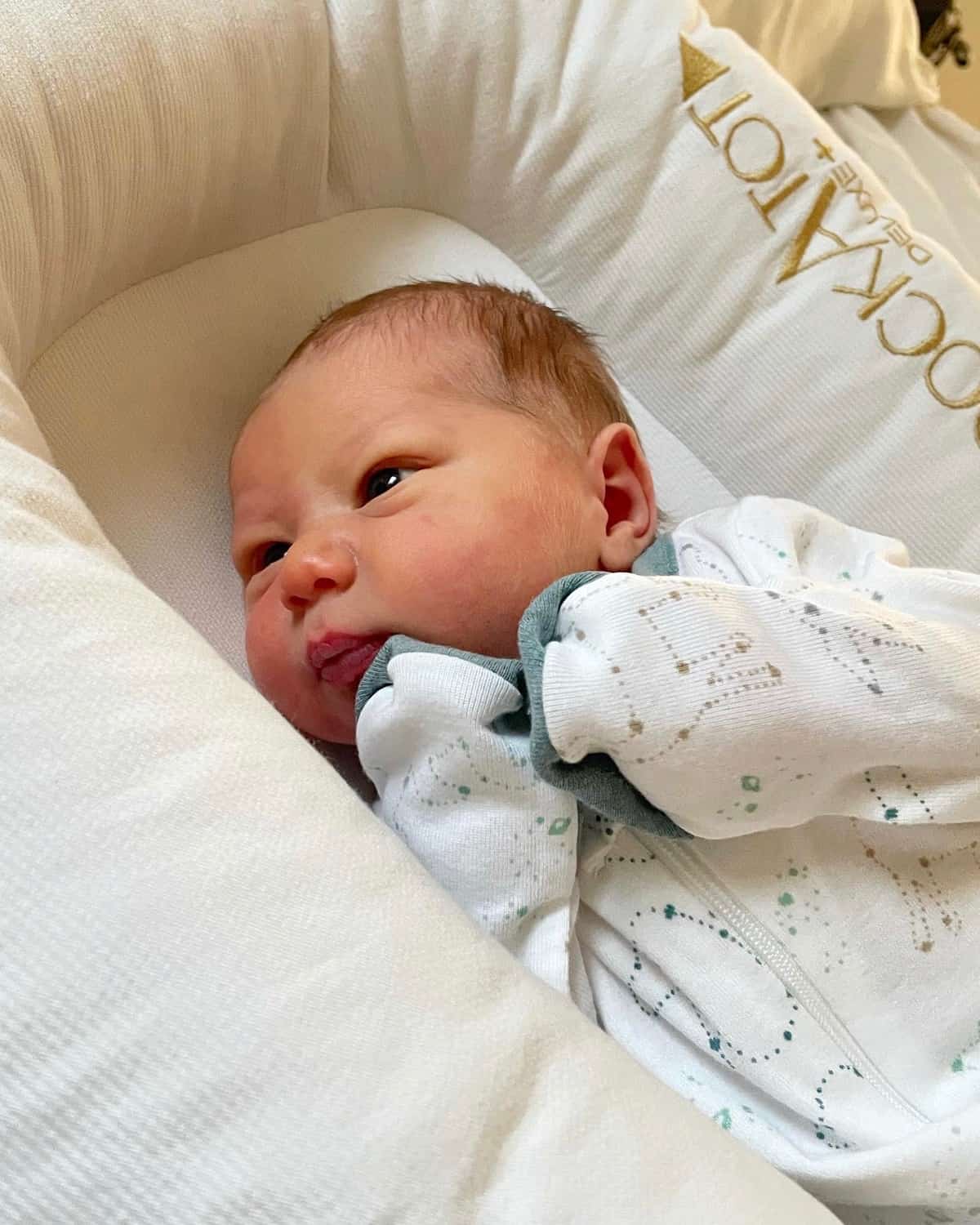 I started pushing around 3pm and baby was born at 3:39pm. I remember them handing my sweetie to me and all I could think was, “What does he look like?!” I couldn’t see his face and still hadn’t seen it once he was placed on my chest. After wondering for 9 months what he’d look like, I just couldn’t wait to devour his little face!

My midwife explained that I had a second degree tear and starting sewing me up. Max nestled on my chest and Jeff and I stared in adoration at our precious little gift. There truly is no sweeter feeling in the world than that moment.

At some point I remember feeling ravenous. I hadn’t eaten in eleven hours besides the popsicle, so I had Jeff feed me a couple bars we’d brought and then I slammed potato chips and a banana. Ha!

The rest of that afternoon was a blur of snuggles, kisses, and baby bliss. 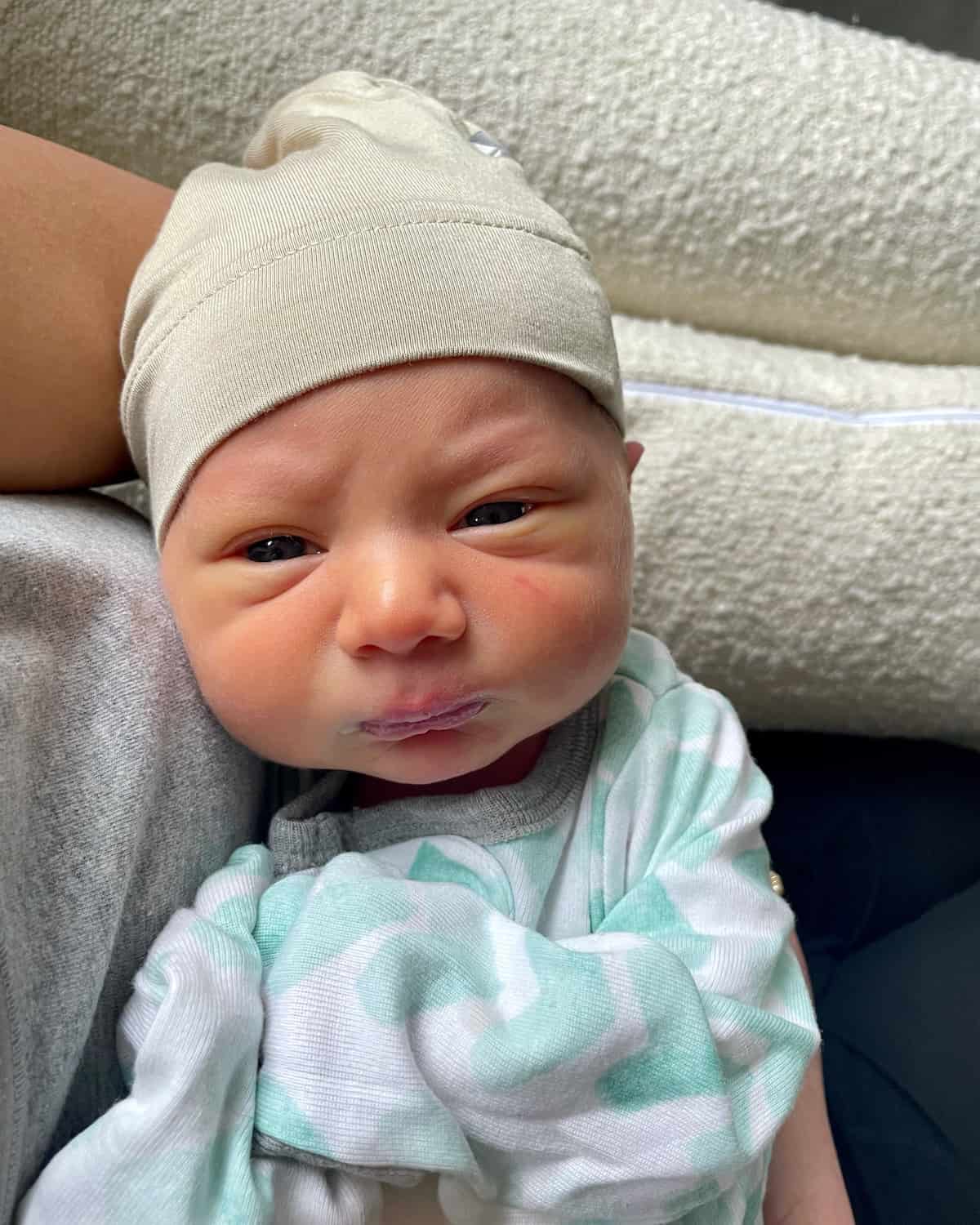 It amazes me how strong women are. Pregnancy, labor, and childbirth are no joke. And my labor experience was pretty low key compared to what some women go through! Women are absolute
superheroes.

I feel so lucky to be Max’s mama. Our world will never be the same!