DID YOU KNOW THAT iron deficiency is the most common and widespread nutritional disorder in the world?  Although low iron affects a large proportion of children and women in developing countries, it is the only nutrient deficiency which is also significantly prevalent in industrialized countries.

A Supplement Breakthrough For Iron Deficiency

Trusted wellness brand, Flora, has been family-run for more than 50 years — the launch of their new breakthrough product is one of the only scientific innovations in the category of iron supplementation in as much time.

In clinical trials, Flora’s Ferritin+ is the first plant-based iron supplement proven to increase iron levels and red blood cell count. It is also the only iron supplement shown to actually store Ferritin iron in your body using your body’s natural storage systems.

That means that through the use of Ferritin+ we could actually cure iron deficiency as we build up our own stores. Theoretically, it’s possible you could even stop taking the supplement at some point because you have built up your iron stores adequately.

The highly bioavailable plant-based supplement also solves for one of the biggest issues that face those who need to take iron: constipation and digestive issues. It may not seem like a big deal, but most iron supplements cause digestion problems that keep women from sticking with the protocol they truly need.

We asked nutritionist and women’s wellness educator, Kristin Dahl to weigh in on the new supplement and iron deficiency in general.

Iron is one of the most important growth substances in a woman’s body. Through specific phases of life, such as adolescence and childbearing, there is greater demand for this mineral, which is essential for making red blood cells, transporting oxygen to every cell in the body, making DNA, aiding in metabolism, and providing energy to the body.

The effects of iron deficiency include impaired delivery of oxygen to body tissues, which impedes their function.

One of the most common side effects of low iron levels is iron-deficient anemia. Anemia occurs when there is a deficiency in red blood cells. Red blood cells play a vital role in delivering oxygen to body tissues, which helps support energy levels.

The main symptom of anemia is excessive fatigue. Even slight iron deficiency can have a noticeable impact on energy levels. Iron deficiency can also lead to heavy blood loss during menstruation (menorrhagia), lowered immune function, and overall decreased physical performance.

Although iron is best absorbed from food, many women struggle with gut issues which impairs the body’s ability to absorb nutrients. This plant-based supplement ensures you are getting the right amount, without the added  digestive distress.

Flora created their new, breakthrough plant-based option that clinical studies have shown to be effective at increasing and maintaining healthy iron levels. It’s readily absorbed without causing irritation to the gastro-intestinal tract and its protein coating allows for controlled release for efficient absorption. Flora Ferritin+ iron offers an alternative to other forms of iron, such as ferrous sulphate or heme iron. It’s unaffected by anti-nutritives, won’t cause nausea, and doesn’t require vitamin c or other co-factors for absorption and assimilation. The perfect plant-based iron supplement option!

Teenage girls are often vulnerable to iron deficiency because of lack of diversity in the diet, skipping meals, and the consumption of too much processed food. Menstruation, which begins during teenage years, is the number one cause of iron deficiency, and the need for iron is greatest during this phase of life. Flora’s plant-based iron is the perfect option to support this transition.

Adolescence is also a time of dramatic growth and development. Iron is essential for growth due to its role in supporting healthy functioning of all of the body’s tissues.

Iron During the Childbearing Years

Blood loss associated with menstruation is the most common cause of iron deficiency for women of childbearing age. Iron deficiency itself can actually cause excessive blood loss, so this is an especially critical time to pay attention to iron intake.

The childbearing years are also a time of life when women often find themselves juggling many obligations: career, relationships, family, and so much more. Iron deficiency can have a major impact on energy levels and productivity. This makes it even more important to ensure that you’re getting enough iron through this active phase of life and with no undesirable side effects Flora’s plant-based option is no brainer. 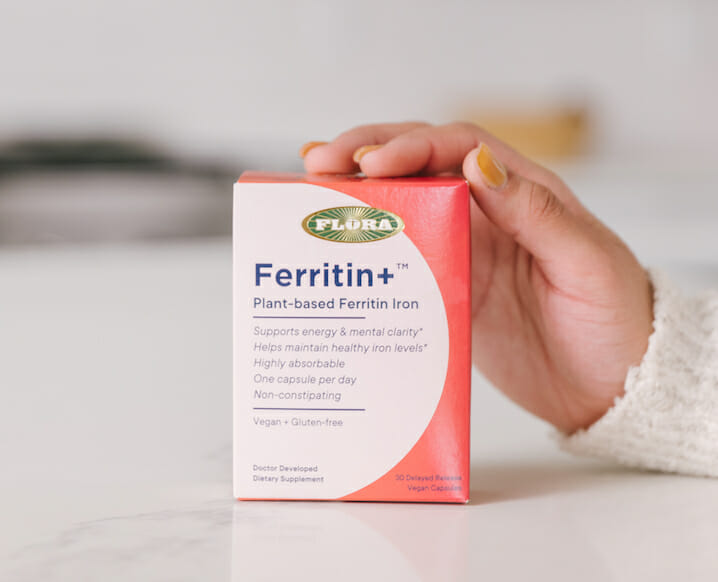 Iron During Pregnancy and Breastfeeding

During pregnancy and breastfeeding, most women need more iron due to the demands of pregnancy. It’s important to monitor and boost iron levels through this phase as many women become deficient due to poor absorption and decreased dietary intake.

The need for iron in the postpartum phase is an essential part of healing. Once the baby is born, it’s important for breastfeeding mothers to have a good iron supply to pass onto the baby. Iron supplementation is a helpful addition to the postpartum healing process. In addition, many postpartum herbal tea blends include red raspberry leaf and nettle leaf, both of which offer iron and other minerals for replenishing the body.

Iron During the Menopausal and Years and Beyond

Once women transition into menopause, they no longer lose iron through the blood loss of menstruation. However, iron deficiency can still be a challenge because as we age, our stomachs make less hydrochloric acid, which is important for digesting food and assimilating nutrients. This contributes to decreased iron absorption, which can sometimes lead to deficiency. Though supplementation isn’t always necessary during this phase, it’s best to check your blood levels to assess your individual needs.

Iron is essential for women throughout their lifecycle, so, in addition to plant-based supplementation it’s imperative to include adequate amounts from food sources.

There are two forms of dietary iron: heme iron and non-heme iron. Heme iron is bound to proteins found in red blood cells. It is found in animal sources such as eggs and grass-fed beef/lamb and is the most easily absorbed form of iron. Non-heme iron is found in plant sources and is less easily absorbed but is still a viable option with the inclusion of a variety of foods. Quality sources include: lentils and legumes, leafy greens such as spinach and parsley, nuts and seeds, spirulina, red raspberry leaf and nettle leaf tea.