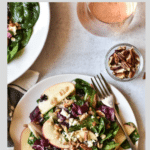 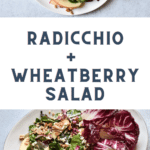 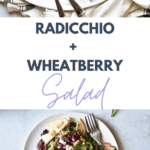 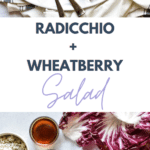 This radicchio and wheatberry salad will be your new summertime favorite! It has great chew, plenty of crunch from pecans, and a flavorful maple olive oil dressing to pull it al together. 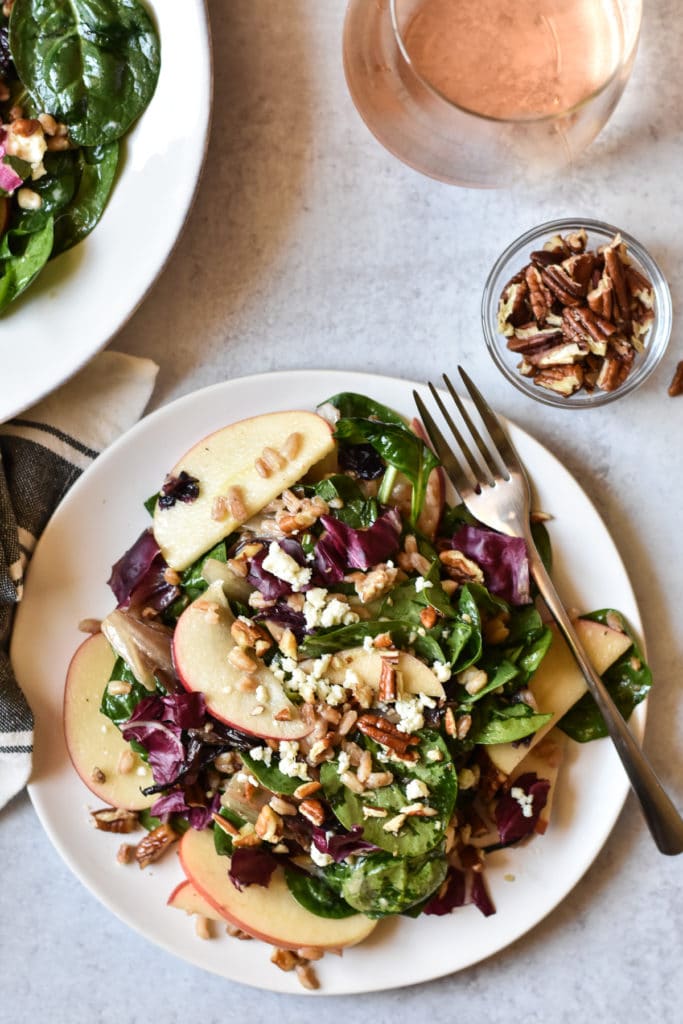 I love my salads in the summer and this one is equal parts beautiful, nutritious and delicious! Radicchio adds such a unique flavor (and a vibrant purple color). Its bitterness is balanced out with sweet crunchy apples and a maple dressing. And of course no salad is complete without crumbly cheese, so here you’ll find bleu which adds a rich bite to every bite!

Here’s everything you need to make it:

Two of the ingredients are stand-outs and a little bit less common than the others: wheatberries and radicchio!

For whole grains and chew, aka “wheat berries.” You might also see them as “hard red winter wheat” in stores. If you can’t find them, you can use farro instead – it’s very similar!

Radicchio gets chopped and browned in a skillet.

Or your favorite leafy green (like thinly shredded kale or arugula)

For crunch and heart-healthy fats

For richness and flavor. You can sub in any crumbly cheese you like in its place. 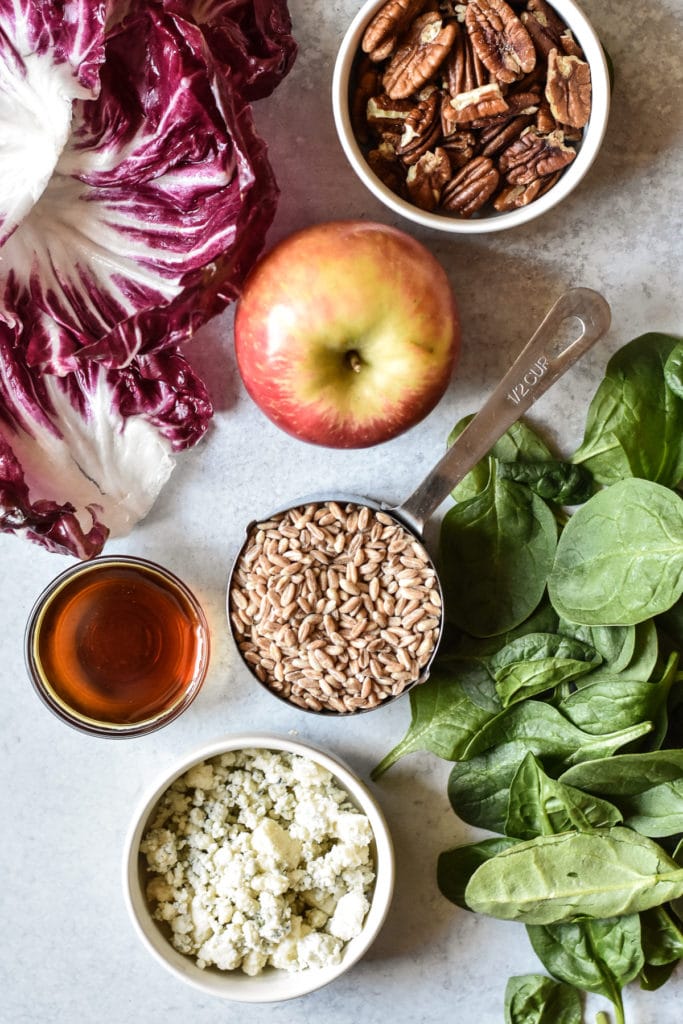 Wheatberries are whole wheat kernels that still have the bran and germ intact, but the (inedible) husk is removed. It’s basically wheat in its most unrefined form. Because of this, wheatberries are rich in nutrients such as fiber, iron and vitamin E. The berries are slightly nutty, have a chewy texture and are most often used in salads, soups and breakfast bowls.

Where do you find them?

Find them near the other whole grains in the grocery store, or in the bulk bins at natural food stores. We used to have giant bags of them at Great Harvest that we would grind into our fresh flour for bread! I could take a cup home whenever I needed. Of course you can always order online too! Bob’s Red Mill is one mainstream brand that sells wheatberries.

Similar to other whole grains, you can simmer wheatberries on the stove, or use a slow cooker or an instant pot to cook them. Some people prefer to soak them first to cut down on actual cooking time but it’s not required.

What are some good substitutions?

Farro is a great substitute and is often easier to find. You could also substitute barley. Both have a similar “chew” and are about the same size and shape. 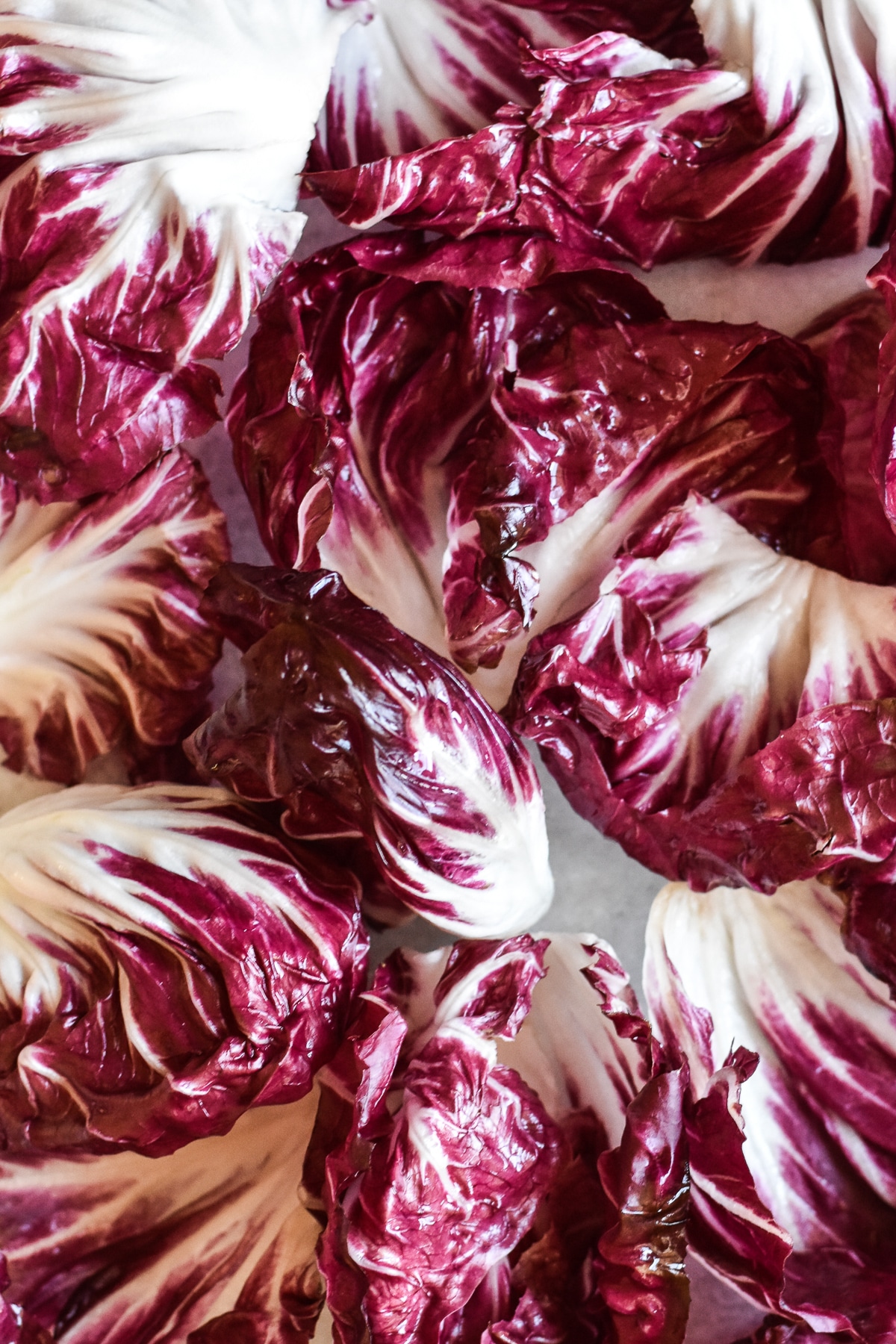 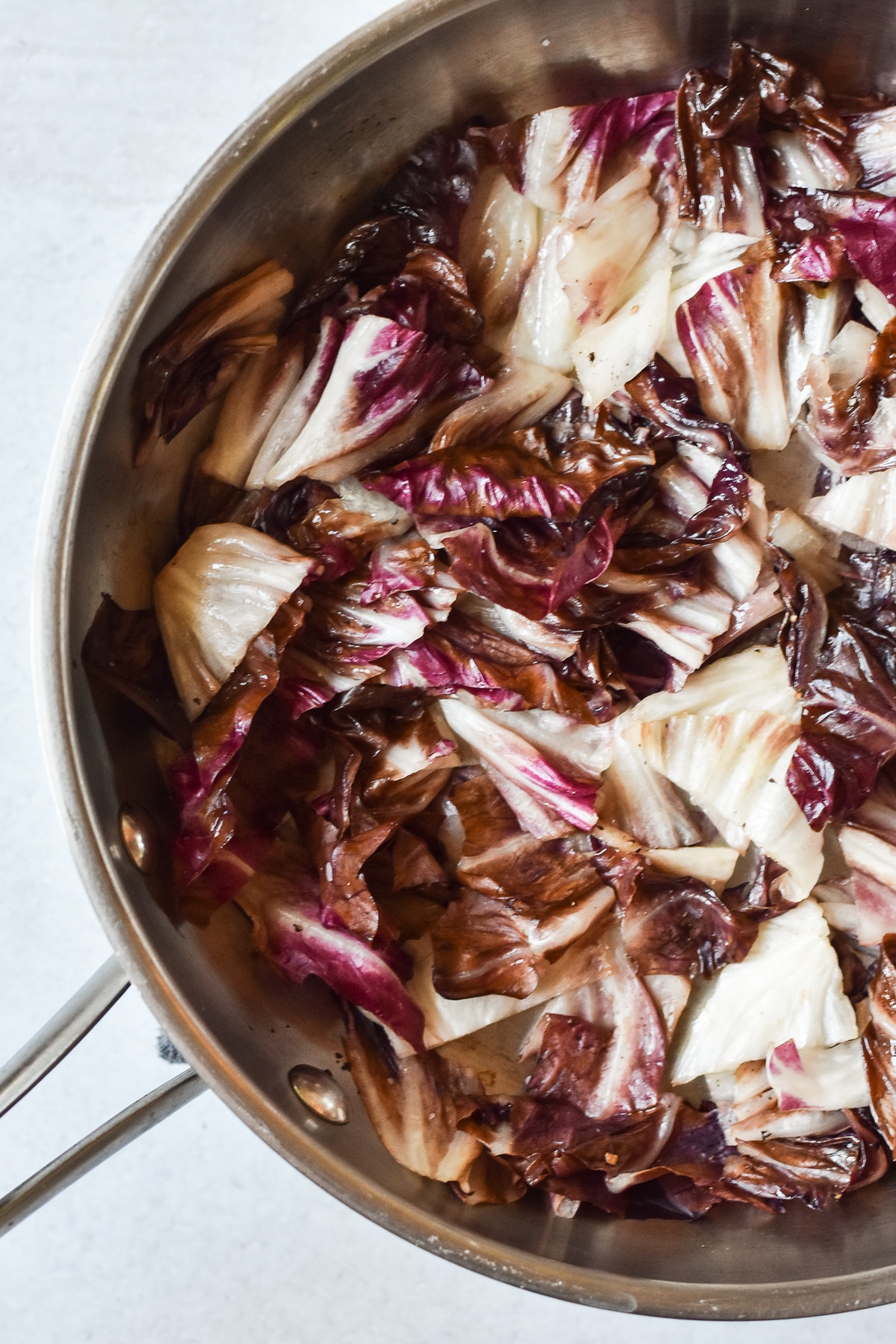 Radicchio is another lesser-know (and underrated!) ingredient in this salad, but don’t let its reputation for bitterness scare you off. The keys to using radicchio in your recipes are:

Chopping it in smaller pieces or slicing thin is also a good idea. It adds a beautiful pop of color and pairs well with the spinach for a double dose of vegetables.

Clearly radicchio is awesome in salads, but if you’re feeling adventurous try it grilled too. That’s my favorite way to enjoy it.

If you can’t find it, try subbing red leaf lettuce or thinly sliced purple cabbage. The flavor won’t be the same, but you’ll still get the color contrast. You can also double up on spinach. 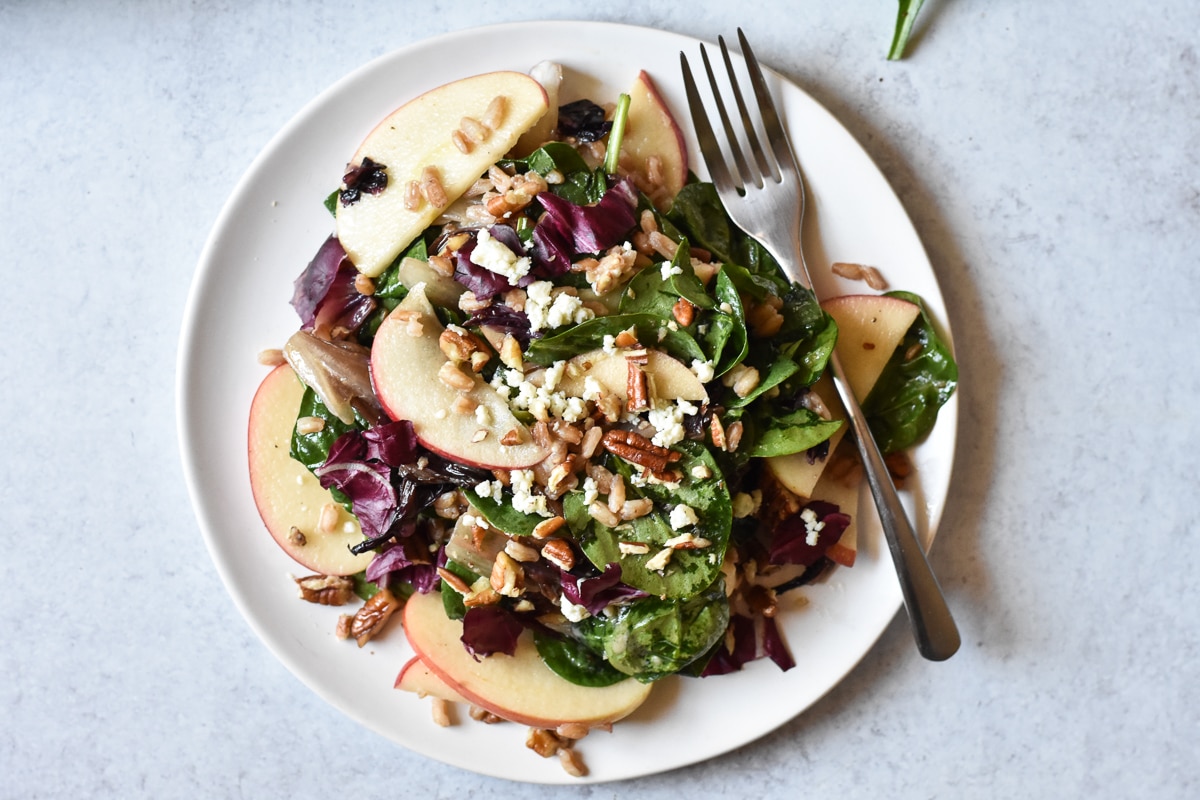 Hello, gorgeous! Just look at that texture. This salad is the opposite of boring spring mix.

This radicchio and wheatberry salad comes together fast and is so much more interesting than your traditional spinach salad. Bring it to a backyard party, meal prep it for lunches or serve it alongside a light summer dinner. 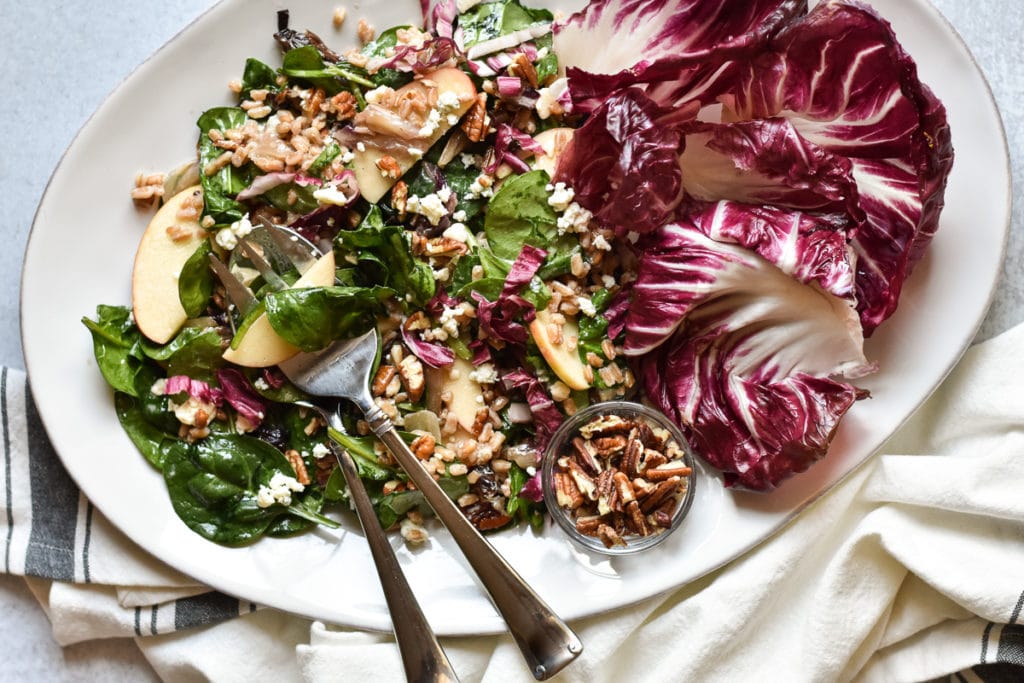 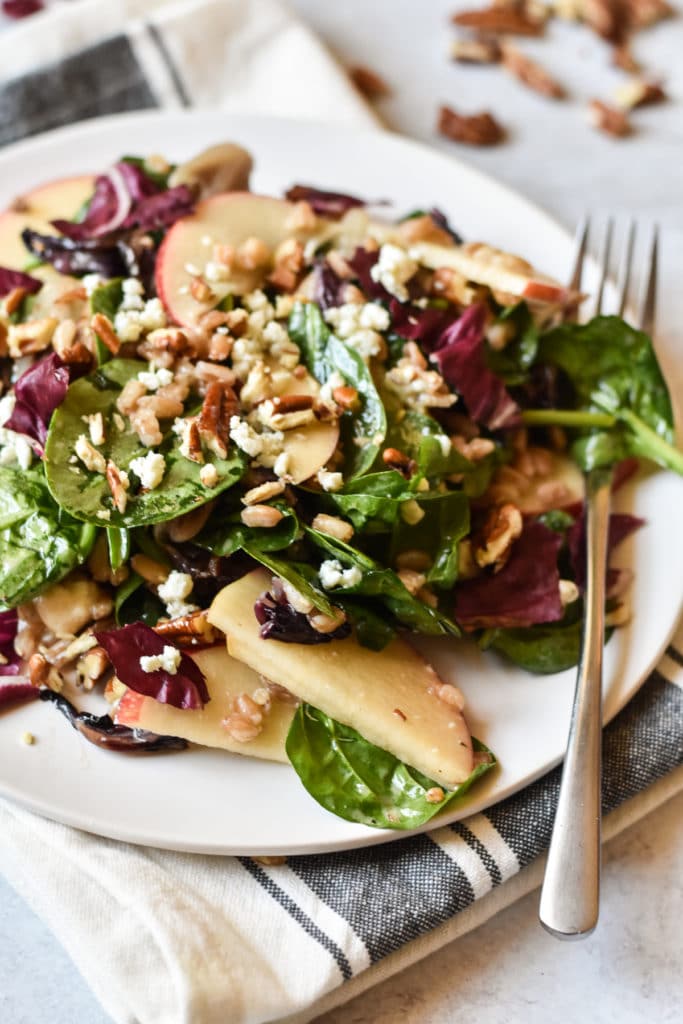