Not only is it one of the most delicious diets around, we love the macrobiotic diet because it gives us an excuse to buy gorgeous Japanese-inspired steamer baskets and tea cups like the one above.

Grounded in the principles of yin and yang, the macrobiotic diet gained recognition in the 60’s and 70’s as a diet that, unlike other “fad” diets, was actually quite easy to follow and catered to the individual. It was more of a lifestyle than a traditional diet that practiced moderation instead of limitation. Not only did the diet shed pounds, it balanced one’s mood and energy, grounded one in the present moment, healed disease and overall cultivated health. Today, the lifestyle is commonly looked to as a gentle cleansing as well as healing diet, often practiced to prevent or heal chronic diseases from heart disease to cancers. The diet in itself is a great stand alone tool to create a balanced way of life and eating well, period.

Created by George Ohsawa and later promoted by Michio Kushi, macrobiotics embodies simplified disciplines of traditional Asian dietotherapy and energy flow. It translates loosely to mean “big life” which was further interpreted in practice as “the art of great life” or “the art of longevity”. Ultimately, the macrobiotic approach is based on the idea that we are the result of our environment – that how we live, what we eat, our climate, stresses, etc – all influence our lives and our health. Through the lens of macrobiotics, we truly are what we eat and how we live.

The Basic Principle of Macrobiotics:

Like feng shui or other energy practices, macrobiotics can be broken down to basic flow with nature and how its energy impacts our own inner balance. Yin and Yang, the flowing energies, represent two halves of a whole – two opposing energies that are constantly moving and changing to create a delicate balance. Yin is more delicate, feminine, while yang energy is bright and large. Only when we live in accordance with these energies do we find balance and health.

When it comes to food, these energies should be balanced at every meal. While this can be broken down in many different ways, from eating locally and in season, to the ingredients used that are energetically categorized as more yin and yang, and even further to even the various parts of the plant (the leaves that are more yang than the root), or even the cooking processes we choose; the overall process and ingredients used will create various energetic outcomes. A quick steaming method, for example, produces a more active, upward energy versus pressure cooking, which produces a condensing yang energy. For this reason food preparation is highly taken into account, as is temperature of food. Blenders and food processors are minimally used, while microwaves are not used as a method of cooking because of the structural energetic change produced.

While the concept of yin and yang are ever-present within macrobiotics, to simplify, let’s discuss what actually ends up in a balanced macrobiotic meal. Here’s how to balance your plate using the principles of macrobiotics.

How To Build A Balanced Macrobiotic Plate

Whole grains are the main focus of a typical Macrobiotic plate or meal. Typically whole grains like brown rice, barley and millet make up about 50-60% of a meal.

Processed and refined flours are not used. Different grains are recommended based on an individual’s needs. Brown rice is said to have the most neutral energy and considered the perfect food, comprised of equal parts yin and yang energy.

Vegetables make up the next largest portion of a meal, comprising 25-30% of the plate. The focus is on cooked vegetables, especially roots, leafy greens, squashes and cabbage. Although raw foods may contain more nutrients as well as inherent enzymes when raw, they may be harder to digest or breakdown by the body. Therefore, there is very little focus on raw foods in general within the practice of macrobiotics.

Certain vegetables are also recommended over others. Leafy greens are strongly recommended with the exception of a few, including spinach, which is said to be too yang, and should only be eaten occasionally. Root vegetables are consumed often due to their strong earth and grounding energy. Vegetables classified as nightshades such as tomatoes, potatoes, eggplant and peppers are not included in the diet due to their mood altering effects and inflammatory response they have the potential to create.

Beans make up about 10% of the meal. Fermented products like tempeh and miso are recommended for their active cultures and ease of digestibility. Soy is commonly used, especially in its fermented forms, though tofu or bean curd is also common.

For the most part a macrobiotic diet is mainly vegetarian. Most meat and dairy products are excluded from the diet, while fish may be eaten minimally, about 1-3 times a week. Eggs may also be eaten occasionally.

Again, the focus is on the energy of the ingredient, so sourcing wild fish or humanely-raised products are equally important.

Fruits are actually rarely eaten on a macrobiotic diet. Tropical fruits, such as pineapple, banana or coconut for example, are not typically consumed in a traditional macrobiotic diet, though may be considered macrobiotic in tropical climates, in the sense that they are seasonal and local.

Sweeteners are rarely used, and in their place fruits may be cooked down and condensed to create lightly sweetened desserts. It is recommended to eat fruit no more than three times per week and ensure they are in season and cooked when consumed.

Seaweeds such as dulse, kelp and kombu are often incorporated into meals for their rich vitamin and mineral content. These sea vegetables are associated with a water or floating energy and aid in alkalizing a dish as well as adding a salty flavor.

Kombu is often added to a pot of cooking beans to help improve digestion of the legumes. A small portion of cooked hijiki seaweed salad is also common served alongside meals. 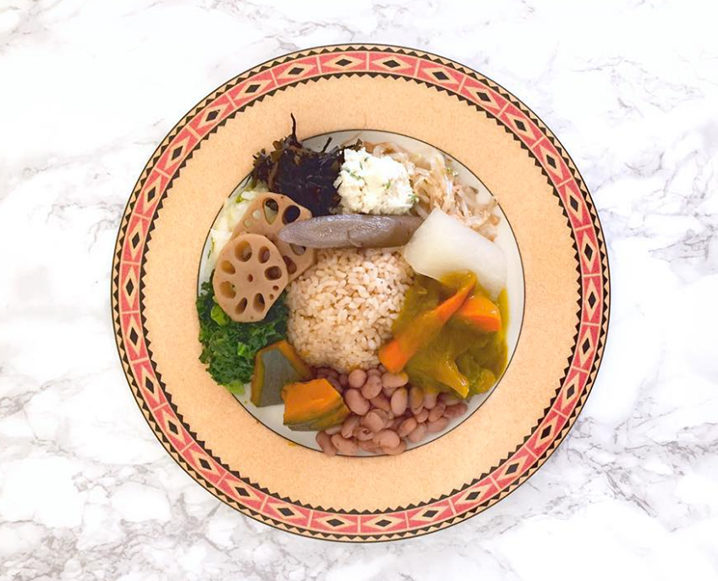 Soups are an important aspect of macrobiotics and are often eaten daily, if not at every meal. According to traditional Chinese practice, it is said that approximately 98.6-100 degrees Fahrenheit is the ideal temperature for our bodies to process food. The stomach and spleen are said to gain more Qi by having to expend less energy through digestion within this temperature.

Soups and stews are considered most nourishing because their nutrients are easily digested at their temperature and very little nutrients are lost in the cooking process. Quite the contrary, the broth holds on to most of their nutrients, and foods are soft and easily broken down.

Condiments and spices are minimally used in macrobiotics. Most spices such as peppers or pungent herbs are thought of as too stimulating or harsh to digestion. Alternatively umeboshis (pickled plums), also highly alkalizing, pickled vegetables and gomasio, made from sesame seeds and sea salt are used.

Most foods are minimally processed and gently cooked. There is not much need for oils in cooking, but when used, sesame oil or corn oil is common. Refined oils are not used at all.

Like spices, beverages such as caffeinated teas, coffee and alcohol are not consumed because they are too stimulating. Most juices and or soda are also eliminated due to their high sugar contents or artificial ingredients. Roasted Japanese twig teas are instead often consumed, such as kukicha or bancha tea.

In addition, cold beverages are rarely consumed, and especially not with meals as they dilute digestive juices. Hot teas, however are encouraged and may be consumed with meals.

The basis of macrobiotics is built around eating pure and wholesome ingredients. This immediately excludes processed, refined, and/or artificial food products containing chemicals or preservatives. In a stricter expression, even canned and frozen foods may be excluded.

The practice also excludes many sweeteners that have been overly refined. Barley malt, rice syrup, maple syrup and the naturally occurring sweetness of fruit are instead used sparingly as preferred forms of sweeteners.

This story originally ran in 2016, but we loved it so much we brought it back.

Hot Pot + Chili Crisp: In The Kitchen with Jing Gao of Fly By Jing
The Best Vegan Recipes For Kids