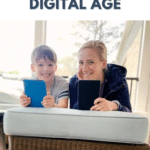 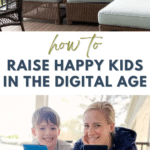 Is screen time contributing to cranky kids? Here are a few tips on how to raise happy kids in the digital age.

It’s no secret that kids these days are growing up in a very different time than when I was a kid. I didn’t get my first cell phone until I was almost through high school, and now toddlers are touching tablets and soothing themselves with screen time from their strollers. It blows my mind that the first iPhone was introduced in 2007. That doesn’t seem like that long ago – look how much has changed!

When I look back on my own childhood, however, I did have plenty of screen time. We watched all the Nickelodeon shows (I can still sing the Maya the Bee theme song!). We watched Full House while my mom cooked dinner and Are You Afraid Of The Dark on Saturday nights during SNICK.

I got a Super Nintendo when I was in 5th grade, and I was definitely addicted for a few years. There were Game Boys, and AOL Instant Messenger. The internet wasn’t what it is now but technology was around us. Did we have limits? I can’t quite remember. 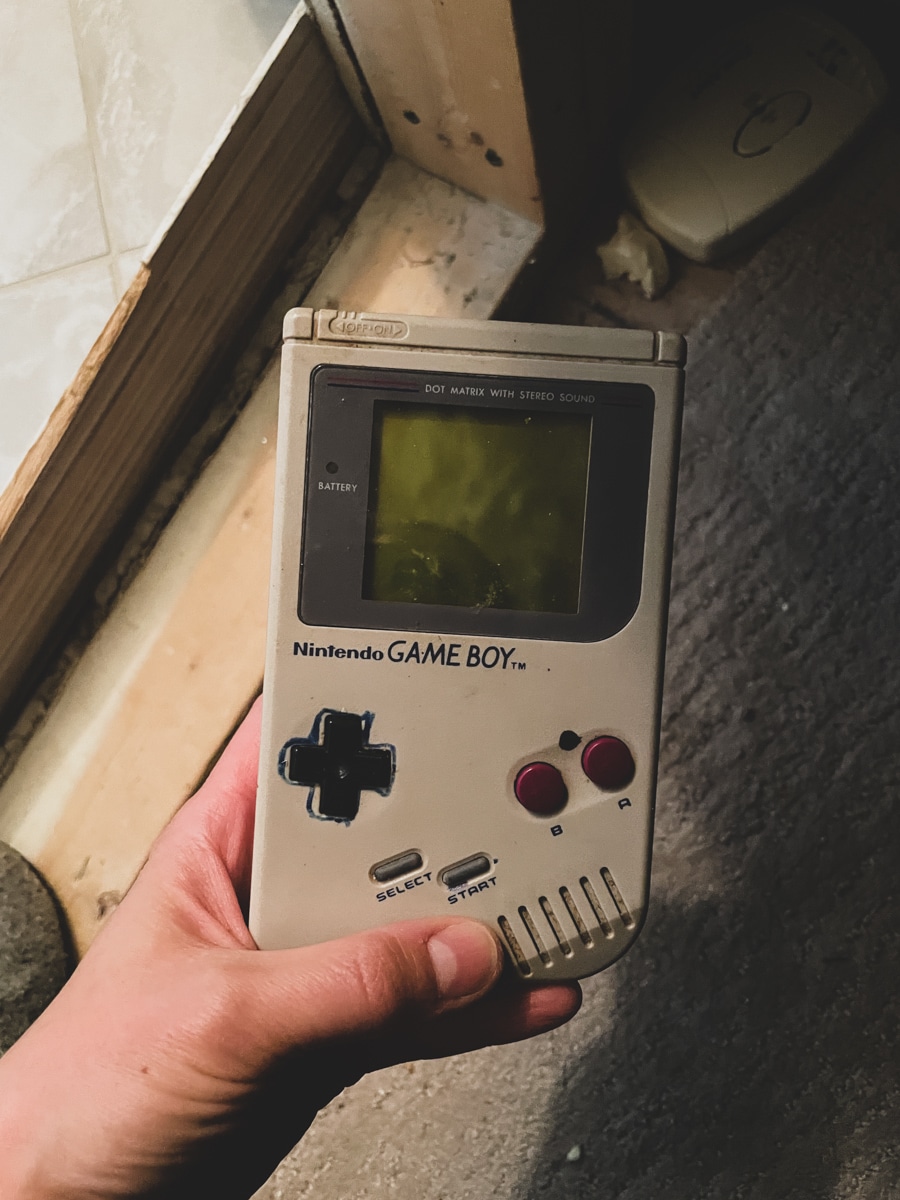 Balancing some digital with too much

As someone who loves tech and works in the digital space, I think our family is accustomed to the digital age just as much as the next. A majority of kids today are exposed to screen-based activities and digital devices both at home or in school (even more so during the pandemic when so many kids attended school virtually).

I love technology and think overall it’s a great thing. The Kindle Paperwhite for Kids has been wonderful getting Mazen reading (and I don’t count the Kindle as a screen). But too much technology use comes at a cost, and I’ve seen first-hand my kids go absolutely buck wild when their brains were fried from screens.

And then there’s the pandemic.

Don’t get me started! Desperate times = desperate measures. I posted recently that I gave Mazen his iPad on a teacher workday and he clocked 8.5 hours. While he was “socializing” with other kids, laughing and chatting, it was still the opposite of how I’d like him to spend his days.

Many parents, myself included, are at the end of their ropes when it comes to school closures, quarantines, and lack of activities available for kids (thank goodness we can play outside most months of the year!) So while I think conversations about screens are important, in this snapshot of time, let’s not get too caught up on feeling guilty. Many of you DMed me a “thanks for keeping it real” because you’re in the same boat.

Raising kids who are confident and happy often seems like a feat in and of itself, and then when you add in regulating their digital world, especially for older kids, some days seem more challenging than others.  It’s tempting to think “all or nothing” is the answer and become a totally screen-free house. That way you don’t have to regulate it. But I don’t think that is the best move in our house – I’d like my kids to be capable when it comes to tech. 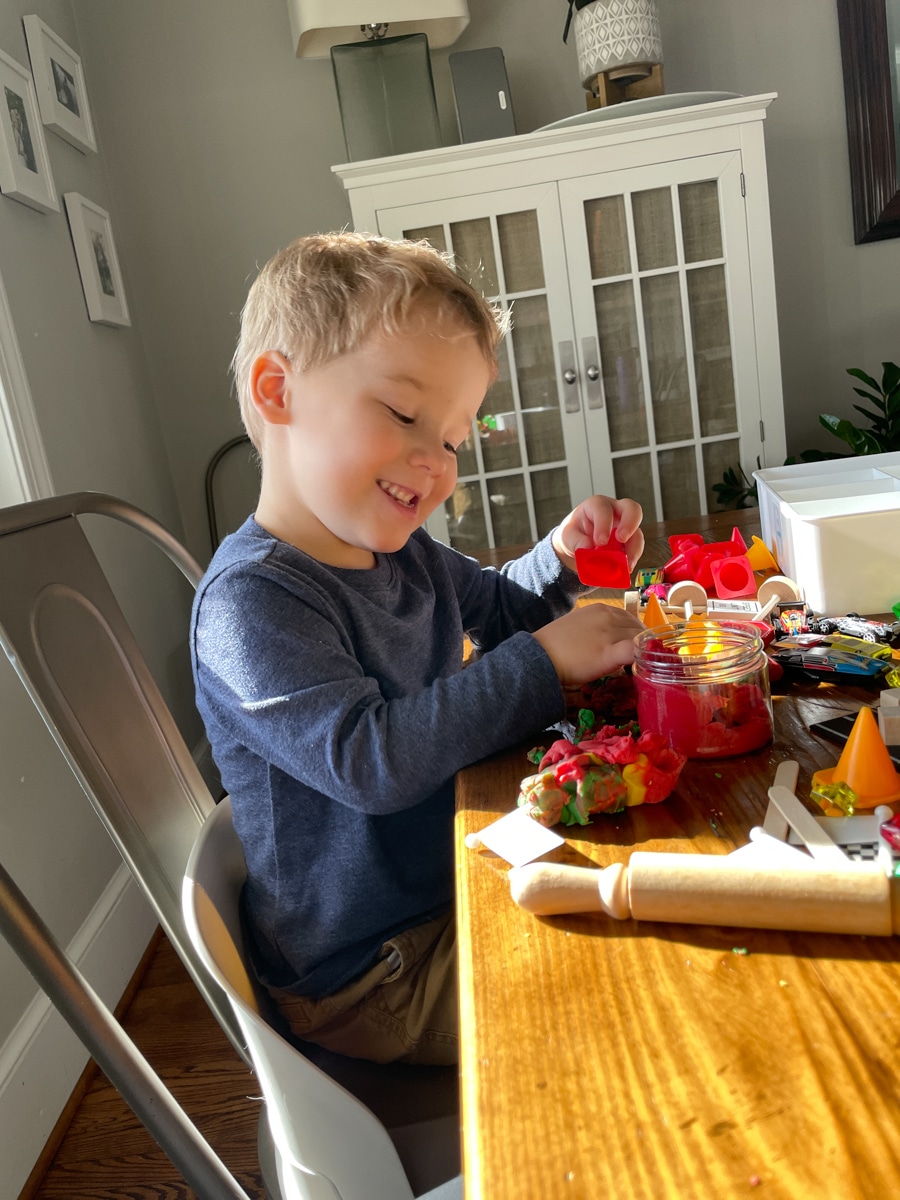 How are screens affecting kids?

We all know too much screen time isn’t beneficial for anyone, at any age; studies show that our digitized world is affecting kids at a young age.

One study found that more time per week spent on screens at ages 24 months and 36 months was linked with poorer performance on screening tests for behavioral, cognitive, and social development at 36 months (JAMA Pediatrics, Vol. 173, No. 3, 2019).

Results from a separate study showed that the more time young adults spent on social media, the more likely they were to have problems sleeping and report symptoms of depression. source

Just like adults, kids can disappear into devices and dare to be distracted. One issue with this is that children can easily spend far too much time being sedentary. “On average, children ages 8-12 in the United States spend 4-6 hours a day watching or using screens, and teens spend up to 9 hours.” (source) I can vouch that when Mazen’s screen time is over for the day, he often does go outside to play. 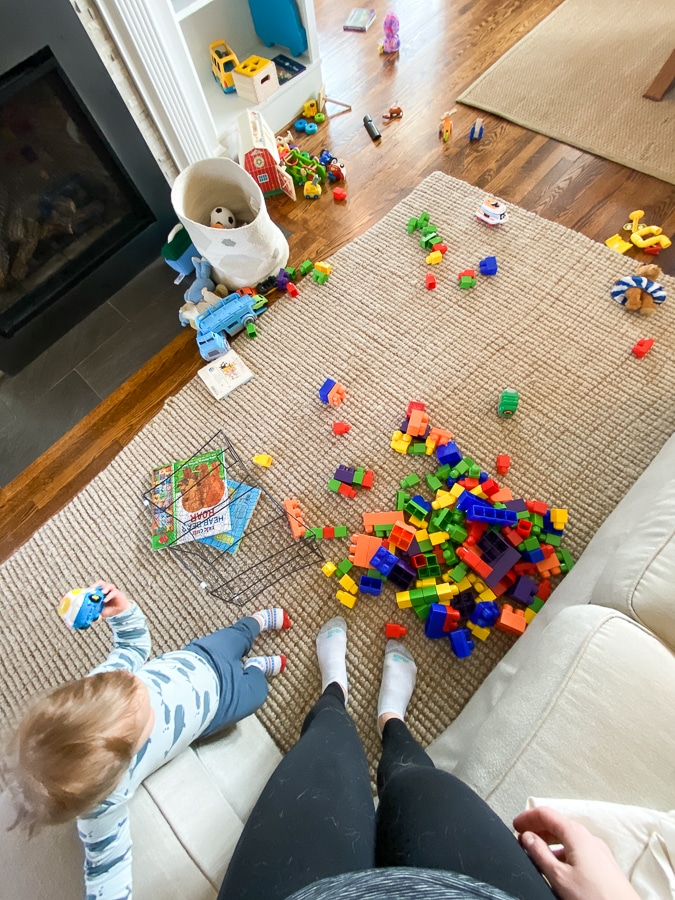 What is all this screen time doing to kids’ brains?

A report released in 2019 by the nonprofit Common Sense Media found that 8- to 12-year-olds now use screens an average of 4 hours and 44 minutes a day. (source) When you add in sleep and school, there’s not much time for playing or activity.

“Early data from a landmark National Institutes of Health study that began in 2018 indicates that children who spent more than two hours a day on screen-time activities scored lower on language and thinking tests, and some children with more than seven hours a day of screen time experienced thinning of the brain’s cortex, the area of the brain related to critical thinking and reasoning.” (source)

Screens can be educational, right?

There are lots of great learning games on the iPad though, and I know my kids learn from shows. Birch knows every part of every vehicle from watching Blippi. Sure he could have learned that from a book, but I do see them learning from screen time too. That’s not to say I think Birch should watch Blippi instead of going to school or going outside, but I’m just saying that screens aren’t all brain-frying fluff. 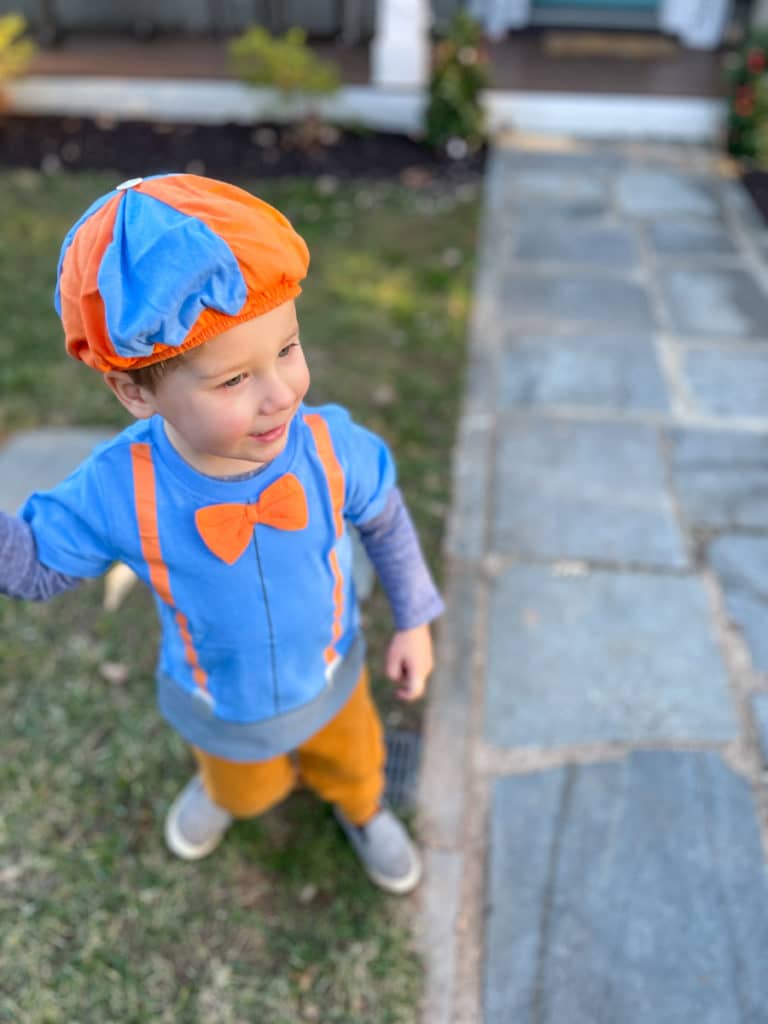 How To Raise Happy Kids In The Digital Age

Here are some tips that I’ve pondered as I’ve navigated this parenting conundrum!

While I admit that I love technology and am not out of reach of my beloved Apple devices often, it is a big goal of mine to be as present with my kids as possible. When we’re playing together, I try hard to keep my phone out of sight (unless to pull it out to take a photo or video). At dinner, we don’t allow our phones at the table. Sure, my kids see me working on my devices from time to time, but I try to keep my mindless scrolling to when the kids are otherwise occupied, at school, or asleep. THIS IS HARD, and it’s a work in progress.

I think the most important thing to remember with screen time is the ratio of it to outside/creative play. While we don’t measure to a tee, I’d say we shoot for a 20% screen time to 80% creative play ratio by encouraging hobbies that give the kids physical activity and creativity. The boys love building forts, scootering, playing hide and seek and tag, going to playgrounds. My kids are happy doing almost anything outside. I also make a dramatic deal about pulling out the Play-Doh or paint set or keeping special arts & crafts activities hidden until we are ready for something new.

You can certainly choose to do zero technology, but is that good for kids living in a very digital world? Probably not. Screens are kind of like food in the sense that you need some but not to overdo it. You have to eat to live, but you get to choose what to eat, when you’re hungry, how much, etc. Similarly, technology is a part of 2022 life. You as the parent get to write the rules and choose what they watch, when tech is allowed, and how much they get. The parental controls on the different platforms are getting smarter too. Both Apple and Nintendo can set screen time limits so when the time is up, it’s up.

There is some research that says co-viewing shows with your kids can negate some of the negative impacts. Watching together allows you to enjoy media with them and afterwards kids can exchange thoughts on the show with family members. Think: family movie afternoon followed by sharing opinions on the movie around the dinner table.

Something we are working on with Mazen is setting clear, predictable expectations on which parts of the day are “screen friendly” and which aren’t. We have a no screens before school rule. After school, there is a window for him to decompress and have snack with his iPad, followed by at least an hour of play time while there is daylight, followed by the rest of his screen time while we make dinner. At age 9, his screen limits are a bit different than Birch’s. Birch’s are actually a bit looser because they can be – he’s not as independent or as interested.

Fill Up The Day With Family Fun

You know how if you fill your plate with delicious real food you are less likely to find yourself wandering around for mindless snacks? Apply that metaphor to the family weekends. When you have activities planned that foster connection, sitting in front of the TV or computer isn’t as appealing. My kids ask for screens when there is little else planned. When we’re out hiking or at the playground, screens don’t cross their minds. 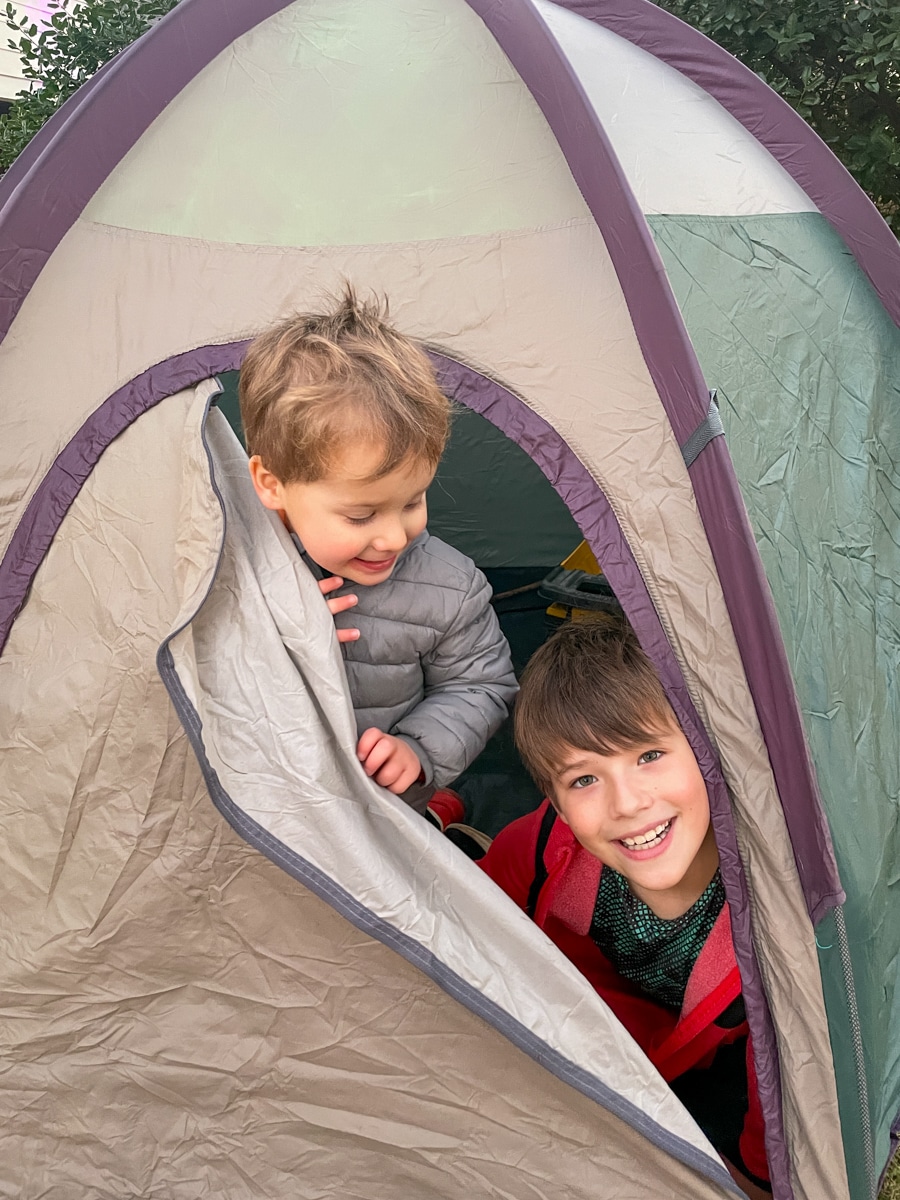 Give yourself some grace

For a good part of the pandemic, the only friend time Mazen got was through FaceTime with his buddies. I’d rather him have that then be totally lonesome. FaceTime is also a great way to connect with grandparents who live out of state.

The pandemic has put a lot of stress on families and taken away many of the activity centers kids love. When there’s snow on the ground or the air is -10 degrees, you can’t really go hiking or swimming. If your kids are getting a little “too much” tech during this time at home, you are not alone.

You may also enjoy: